When gaming, the first thing you want to optimize is the FPS, or “frames per second.” A better and more consistent framerate means a smoother and more enjoyable gaming experience. To increase FPS, you must optimize in-game settings and keep an eye on external influences upon the app as it’s running on your device. Whether that’s physical, like lack of cooling, or a program-related thing, like having a million Chrome tabs open, you want to ensure the game runs as smoothly as possible. Let’s discuss how to increase FPS and decrease lag in Genshin Impact.

To get higher FPS in Genshin Impact, get into the game and open the Paimon Menu. Select Settings > Graphics. Tweak the graphics settings to match the maximum performance of your device’s graphics processor.

How to get higher FPS in Genshin Impact (mobile)

Here’s the thing when it comes to mobile gaming.

Smartphones aren’t designed for mobile games. The technology that goes into designing even the beefiest gaming phone is geared towards telecommunications. After all, if you can play Genshin Impact at 4K with high refresh consistently, but cannot call a taxi home, the device sort of loses its purpose.

This is not to say that mobile phones cannot handle Genshin Impact. On the contrary, most modern-day devices that sport at least a Snapdragon 865 chip can adequately run Genshin Impact. That said, your phone will inevitably get hot running a game that demands real-time rendering and significant processing power. Heat unequivocally equates to lower performance, so maintaining cool temperatures will go a long way for Genshin on any device. 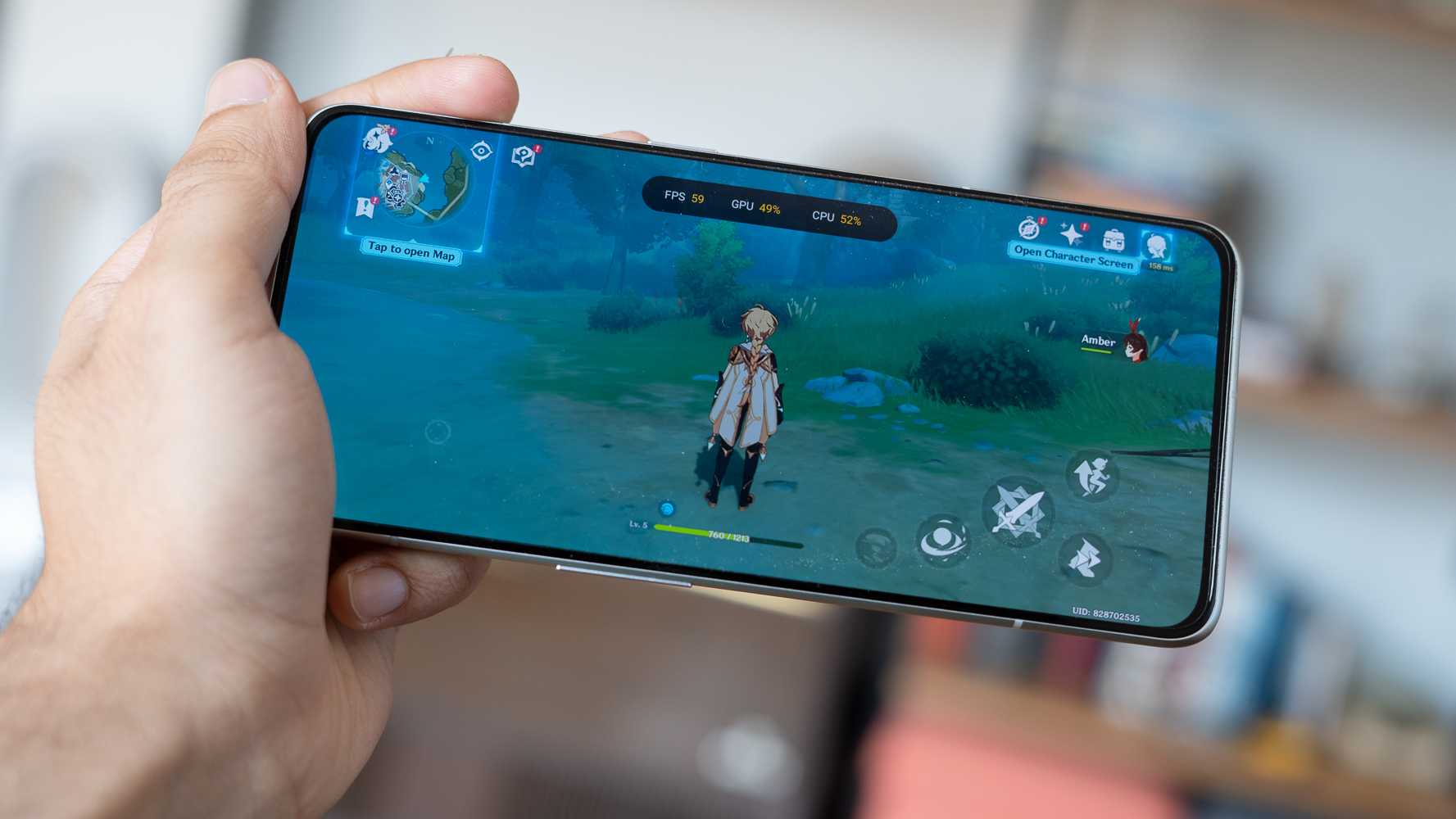 If you’re finding that Genshin Impact isn’t running very well on your device, you can tweak in-game settings, close other running apps, and try a RAM booster to increase performance.

Open Genshin Impact on your device and start the game. Tap the Paimon icon in the top left to open the Paimon Menu.

Tap the gear-shaped Settings icon from the vertically-aligned menu on the left.

Within Settings, tap the Graphics tab from the options on the left.

At the top, there will be an indicator of the Current Performance Load. If you are experiencing stuttering or lag, there’s a good chance this will read Overclocked. To fix this and increase performance, you must lower the settings in the Custom section.

When you are satisfied with your new graphics settings, exit out of the menu and return to the game. You may want to restart the app to apply all of the new settings.

When Genshin Impact is the only app open on your device, return to it to see if the game is running any better.

Genshin Impact needs a good deal of free RAM to run properly. If you find the game is running poorly, you may not have enough RAM.

Try downloading the RAM Booster (Memory Cleaner) app from the Google Play Store. This is an excellent tool for quickly freeing up RAM, especially if you don’t have a tool built into your device already.

Open the Ram Booster app and tap the rocket-shaped icon at the bottom. Tap it again on the next page to clear that amount of RAM. 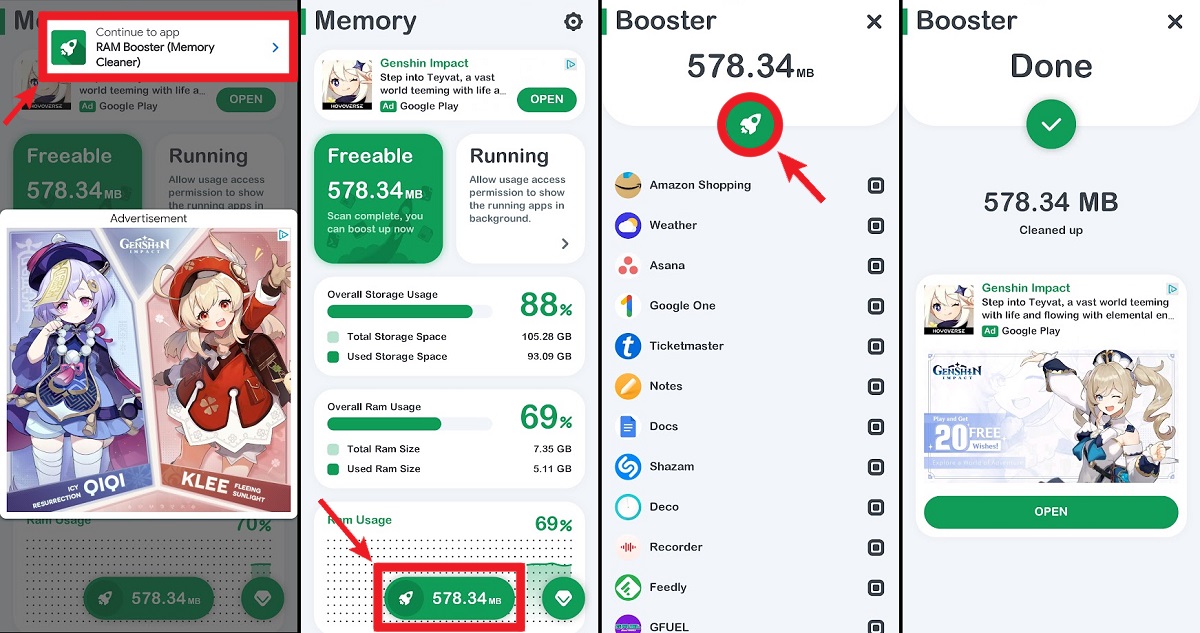 How to get higher FPS in Genshin Impact (desktop)

Playing Genshin Impact on a dedicated desktop PC is a pretty enjoyable experience, as long as the gacha system doesn’t ruin your day. That said, this is still a pretty intensive game, and one of the older laptops we tested the game on didn’t hold up too well. In fact, equipped with a GTX 1050, it was even more stuttery than on mobile.

So, instead of throwing money at Genshin’s Wish system, you may want to invest in a proper gaming setup first.

Open the Paimon Menu. On desktop, do this by holding down Alt and clicking the Paimon icon in the top left or by pressing Esc on your keyboard.

In the Paimon Menu, click the gear-shaped Settings button in the vertical toolbar along the left.

Within Settings, click the Graphics tab from the options along the left.

Within the Graphics tab, scroll down to all of the options underneath Custom. To increase FPS, you must tweak these settings based on the current specs of your computer.

Once finished, close the game and restart it to apply your new graphics settings.

The best way to do this is to press Ctrl+Alt+Delete on your computer and open the Task Manager. 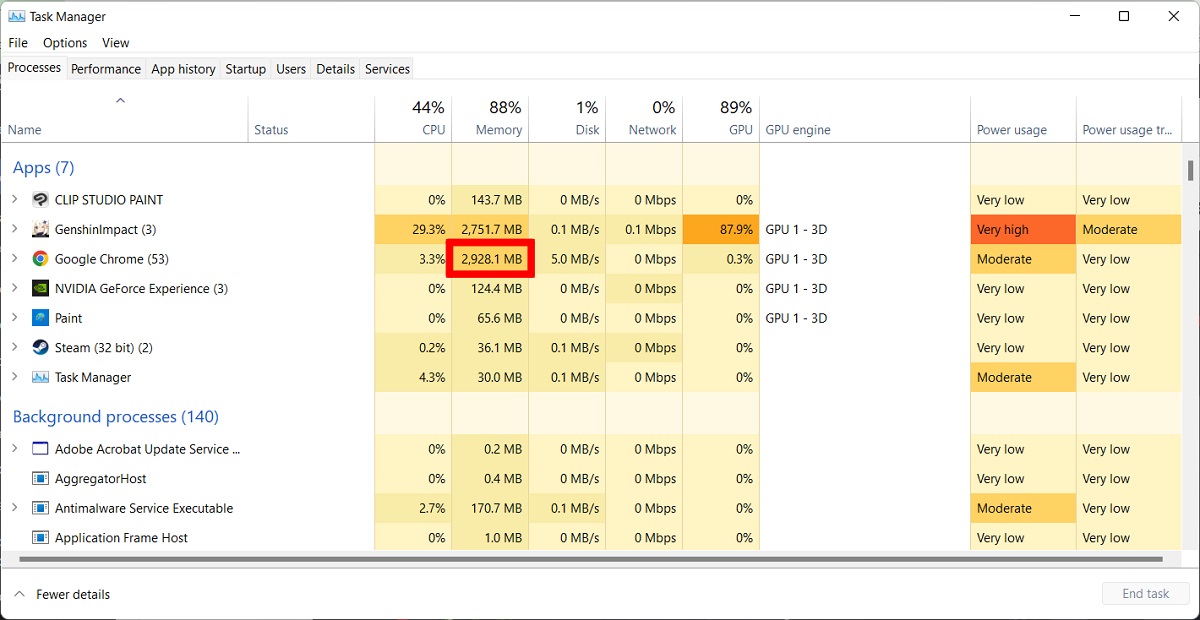 In the Processes tab, close any open apps or programs that aren’t Genshin Impact. Alternatively, if there are open apps that you absolutely must keep open, close only the ones that have a high impact on your CPU, Memory, or GPU.

To close an app or program from the Task Manager, right-click on its name. From the subsequent options, select End task. 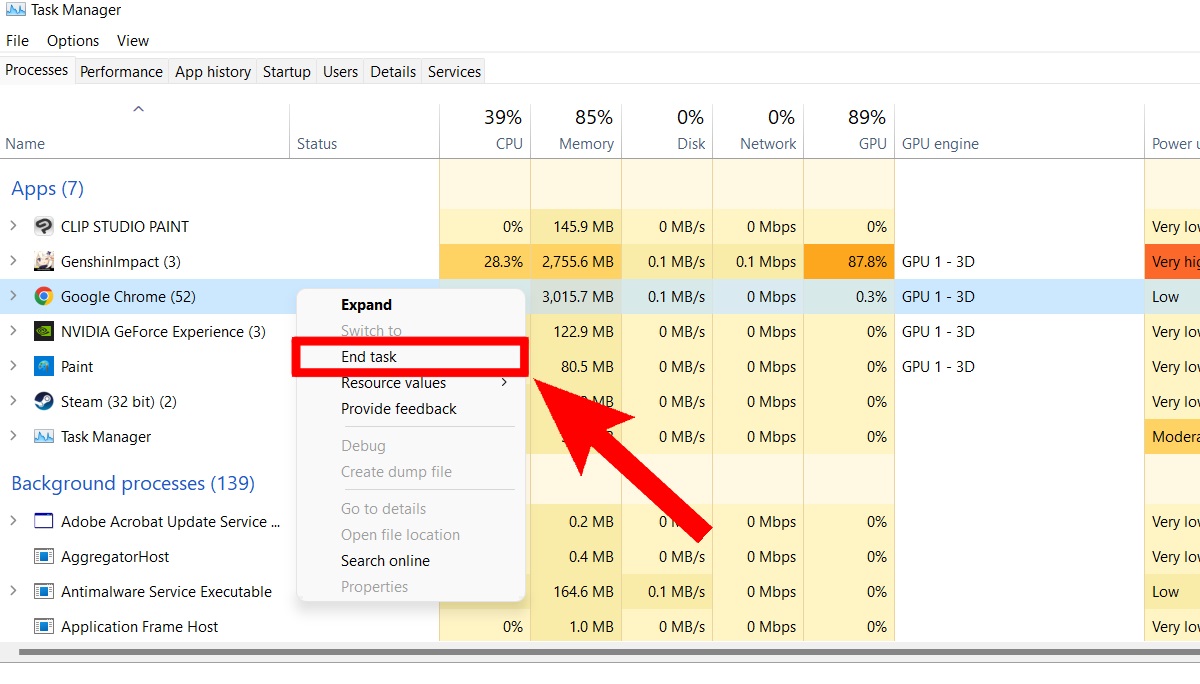 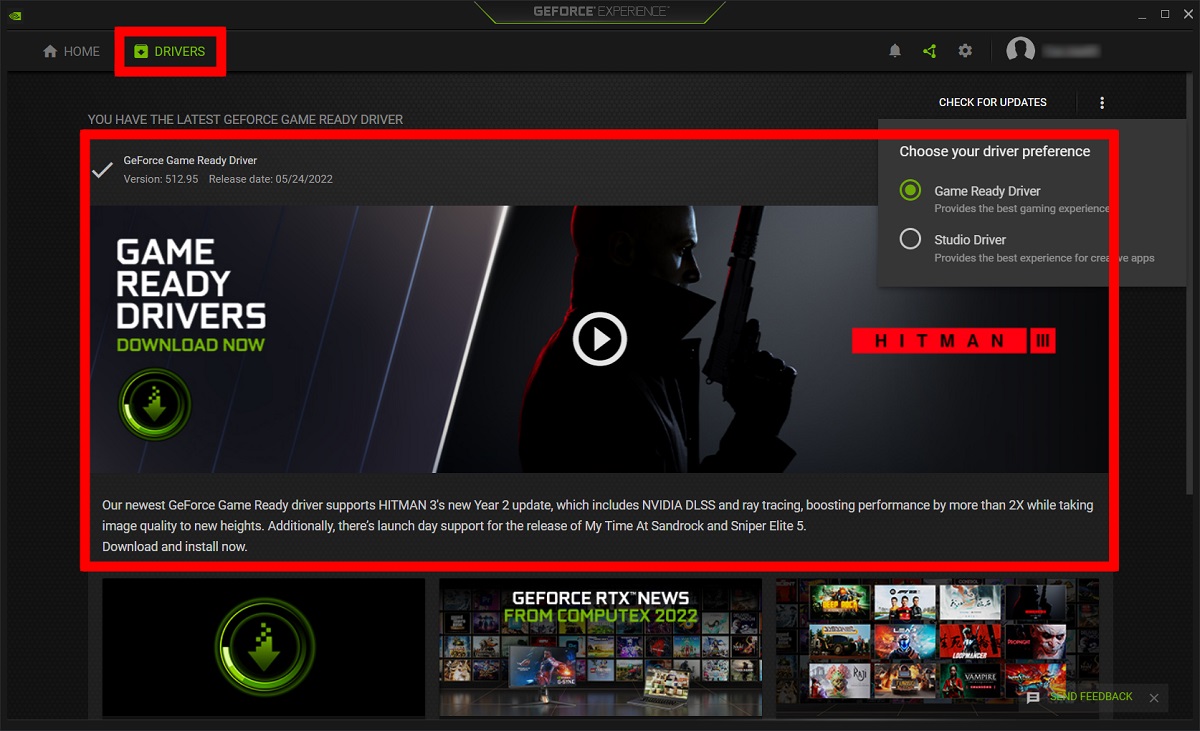 This is another thing that can help. If your computer has an NVIDIA graphics card, or GPU, then you can open the GeForce Experience app on your computer, go to the DRIVERS tab, and download the latest GeForce Game Ready Driver.

If you have an AMD graphics card, go to the AMD support website and manually install your driver updates.

You can set Genshin Impact’s priority to ‘High’ in the Task Manager. Prioritizing running apps will provide a small performance boost that some perceive as quite noticeable.

To do this, press Ctrl+Alt+Delete on your computer, and open the Task Manager. From there, click the Details tab.

Within Details, locate GenshinImpact.exe, and right-click it. Hover your mouse cursor over Set priority, then, from the extended menu, click High.

Use the search function in the Windows Start menu to locate Genshin Impact. Right-click the app, then select Open file location. 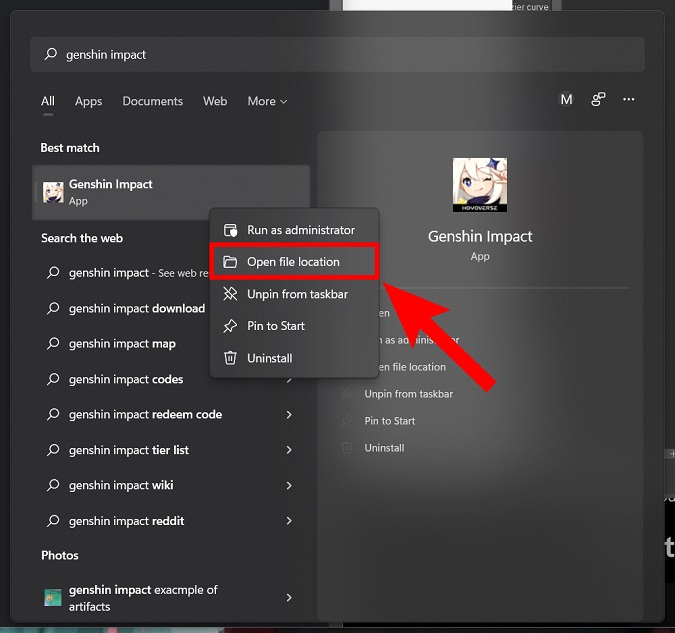 In the File Explorer, right-click the Genshin Impact app. From the subsequent options, click Properties. 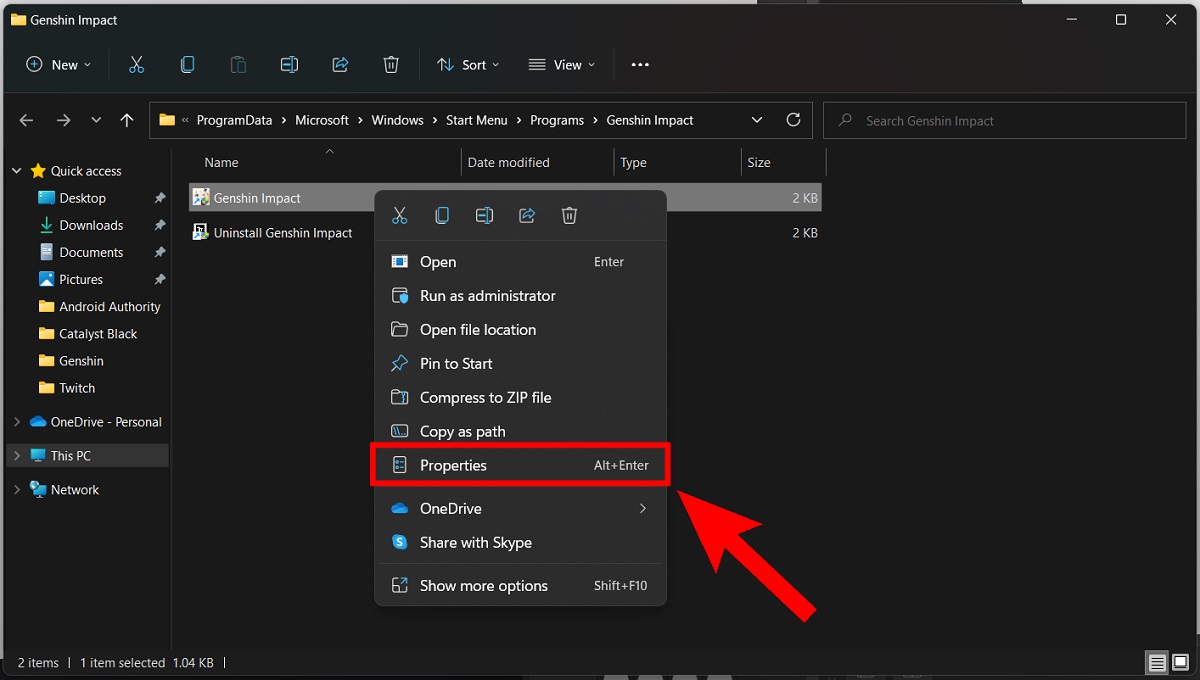 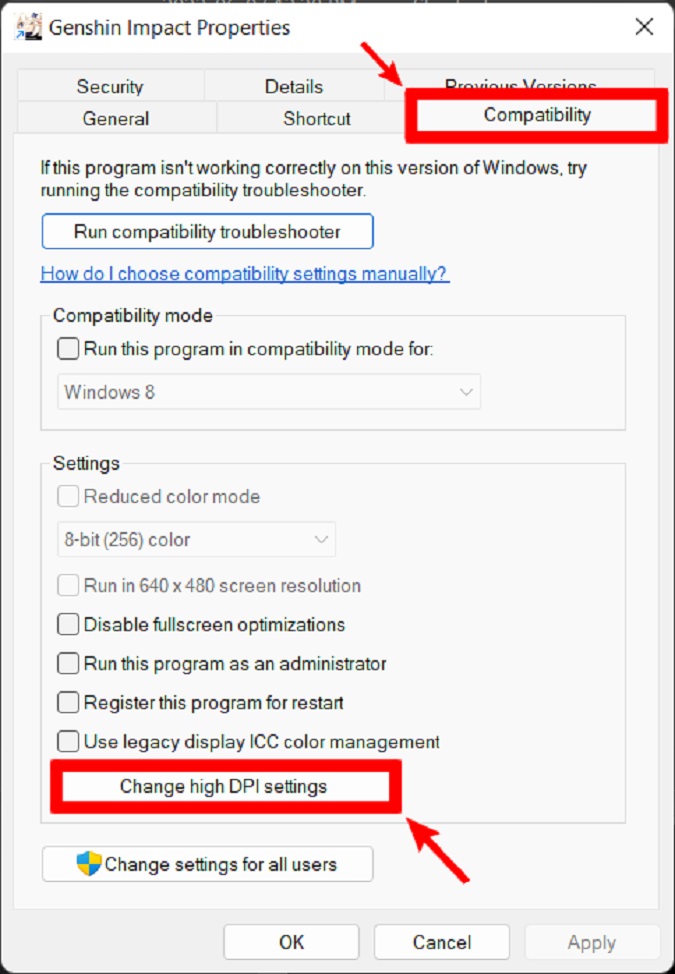 Click the checkbox next to Override high DPI scaling behavior. Make sure the scaling is performed by the application, then click OK. 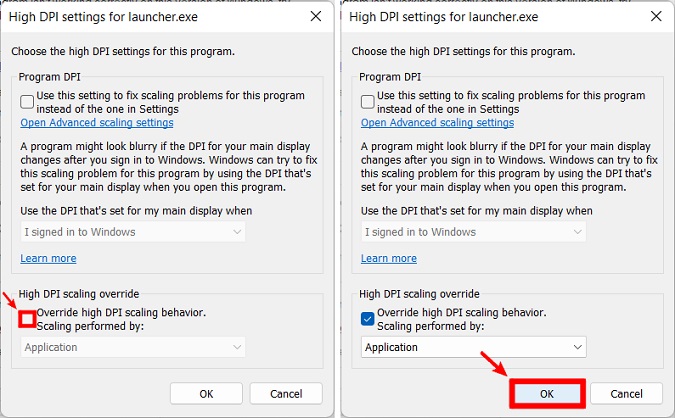 Apply your settings, then exit out and return to your game.