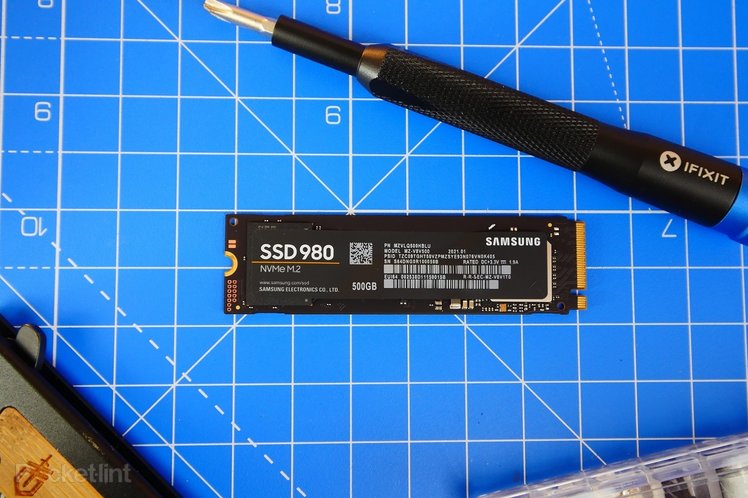 We’ve written before about how to build your own gaming PC but if you’ve not built one recently or haven’t taken the time to look at the different storage options out there, you might not realise the possibilities.

NVMe SSDs are the newest standard of Solid State Drive. These modules offer blazing-fast read and write speeds that can improve the performance of your games by reducing load times, minimising installation duration and improving your overall operating system experience too.

They’re also remarkably easy to install. We’re here to show you how. 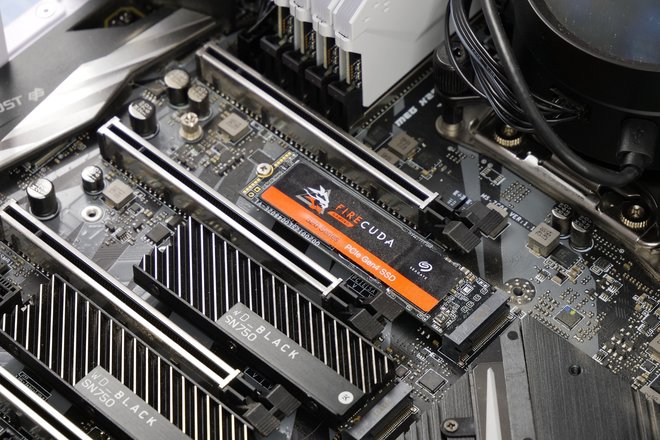 Take advantage of the PCIe gen 4 motherboard technology with the latest NVMe drives and you can get some seriously eye-watering speeds.

In real-world terms, what that means is if you install Windows on these drives, you’ll find your computer will boot up in a matter of seconds. Quite often in the blink of an eye. Most modern laptops feature NVMe drives for just this reason – incredible load speeds lead to a much more satisfactory user experience.

For gamers, NVMe drives ensure that games load faster. There’s no hanging around waiting for boring load screens and in multiplayer games, you’ll have the edge as your game will likely load before your competitors.

Installation times are also significantly reduced. These drives won’t help you download games any faster, but they will ensure the game is installed as quickly as possible and you’re into the action as soon as you can be.

If you’re the sort of gamer who enjoys recording and streaming, these drives can help with that too. It’s easier to edit videos when they’re quick to load or transfer around your machine.

Our favourite thing about NVMe drives though is how easy they are to install.

How to install an NVMe SSD

Most modern motherboards support NVMe drives via an M.2 slot. These are simple slots that allow you to plug your NVMe drive straight into your PC without any extra cables. All you need to do is plug the NVMe drive in and screw it down.

We first recommend checking your motherboard manufacturer’s website for your relevant device to see if they include any M.2 slots in the design. If they don’t, not to worry as there’s a second way to install with a PCI-e adapter we’ll show you as well.

Before you get started be sure to unplug your computer from the mains and ground yourself with an anti-static wrist strap to avoid damaging your machine or the drive during the process.

The next step is to find a spare M.2 slot on your motherboard. These can be found by checking the motherboard manual or looking for the markings on the motherboard itself. There are usually one or more slots available.

The next step is to remove the NMVe drive from its packaging and insert it into that slot and screw it securely down. You’ll usually find the correct screws bundled with the parts that came with your motherboard or supplied with the drive itself.

Now you’ll need to boot into Windows and register that drive within your operating system before it can be used. This guide shows you how to do that.

We’d also recommend checking for software from the NVMe SSD manufacturers, as there will often be applications to help boost performance, monitor the drives and deal with any issues.

How to install an NVMe SSD with an adapter

You can purchase adapters that allow you to install M.2 drives in a spare PCIeX4 slot. This means you can still take advantage of the speed enhancements and boost the performance of your machine easily too. The great thing is, these adapters don’t cost much either.

We’d recommend checking your motherboard supports this sort of upgrade before you attempt it though.

As with the standard installation, installation this way is really simple too and the process is similar. Simply plug your NVMe drive into the adapter and screw it down as you would when attaching it to your motherboard.

The next step is to find the empty PCIeX4 slot on your motherboard. Again, you can find this by checking the motherboard manual, the manufacturer’s website or via markings on the motherboard itself. Ours looks like this: 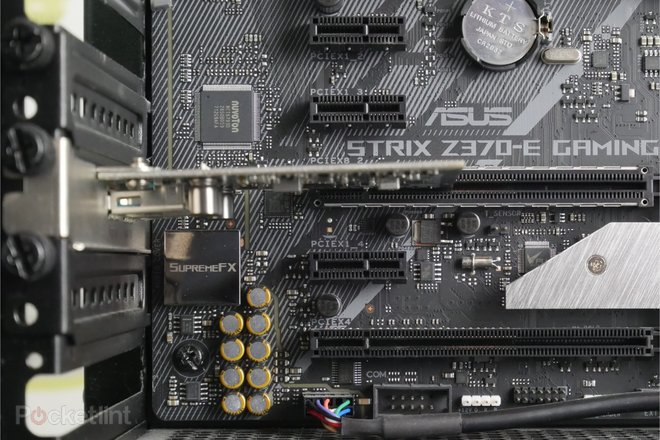 Once you’ve found it, remove the thumbscrew on the rear of your machine that lines up with that slot. Then remove the backplate to give you full access. Now you can install the new PCIe adapter and slot it firmly but carefully in place. Then simply replace the screw to secure it.

As with the standard installation, there’s no need for extra wires or power cables. It’s a simple installation process and that’s fantastic.

Once that’s done, plug your machine back in, turn it on and go into Windows to register the new drive. 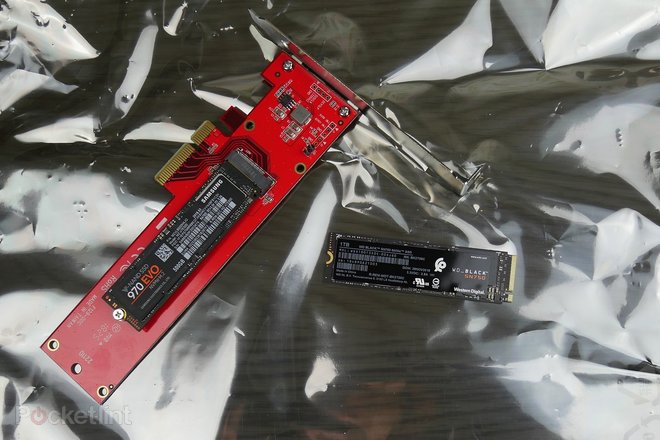 Which NVMe SSD drives should you buy?

There are a number of NVMe SSD drives available to buy. With numerous faster and better drives being released all the time. Most of the drives are only capable of holding around 2TB of data maximum at the moment and at that size they do verge on being rather expensive.

It is worth paying extra for larger sizes though, as if you scrimp on a cheap 250GB drive you’ll soon find it fills up. Windows takes up around 10GB of space and many modern games can take up huge amounts of room. Red Dead Redemption 2 is 150GB, as is Flight Simulator, Call of Duty Modern Warfare is now 200 GB. You’ll soon see it’s better to go bigger.

We’ve tried a few different drives in recent years, the WD Black SN750 is the one of these and is designed specifically for gamers. There’s also a version of this device coming soon with an EKWB designed heatsink to further improve performance with an awesome looking design finish. 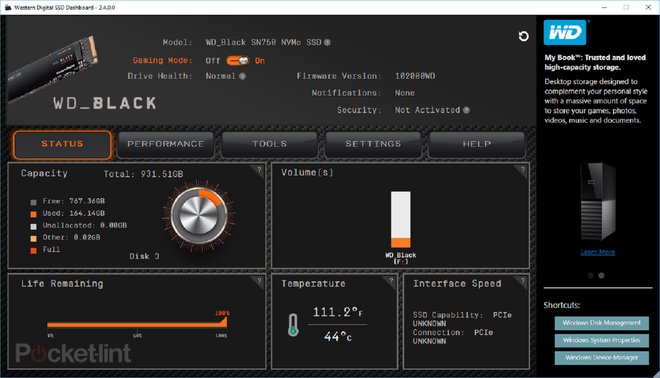 Samsung’s range of Evo drives are also highly thought of and recommended by many as faster, reliable and superb for any use.

The Seagate Firecuda 520 is specifically designed for PCIe gen 4 motherboards and tops out at 5,000 Mb/s making it one of the fastest we’ve tested.

At the end of the day, each of these drives offers blistering performance, faster game loads time and sheer PC gaming joy. Which you buy will depend on your plans and your bank balance. 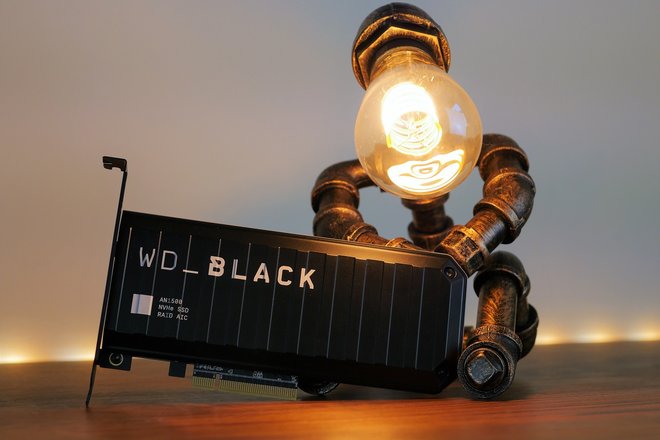 As an alternative to traditional M.2 NVMe drives, there are also other variants that include PCIe models like the WD_Black AN1500.

This drive is an interesting alternative for a couple of reasons. Firstly, it can be installed in a PCIe X16 slot, meaning if you don’t have a (spare) M.2 drive on your motherboard, you can still plug it in and use it.

Secondly, this drive is cleverly designed so it can get up to 6,500MB/s read speeds even on old PCIe Gen 3 motherboards. If you don’t know already, these speeds are close to PCIe Gen 4 NVMe speeds – running at twice the speed of standard M.2 drives. Which is why you’re paying a premium with this device.

You do need to make sure it’s compatible with your motherboard (see the compatibility list here) as it requires a PCIe slot with at least X8 PCIe CPU lanes, which you might need to adjust in your BIOS, but otherwise, this is a great alternative to other NVMe options.