If you’re looking to switch to another music service from Spotify, there’s plenty to choose from. There are a lot of reasons why one may be looking to make the switch, and no matter the reason, the process is pretty much the same. Some services make it as easy as possible to facilitate the change, and there are other third-party services that you can use as well.

It can be hard to choose which service to switch to. If you find yourself using YouTube a lot, then YouTube Music might be a great one to take a look at. If you care more about high-quality audio, then maybe TIDAL is for you. There’s also Apple Music for integration in the Apple ecosystem, and other services such as Pandora and Deezer, too. The hardest part of switching is deciding which to move to, as your favorite tracks are likely to be on pretty much every platform.

Which music streaming service is the cheapest?

The most important aspect for many people who switch the cost. If you were on the fence about staying with Spotify or not, an increased price would likely be enough to deter you from being bothered switching. Thankfully, all of these services tend to be in and around the same price, and most of them even have new subscriber benefits. For example, new subscribers can often avail themselves of a free trial for a month or even a reduced price for the first few months of the subscription.

The pros and cons of switching from Spotify to another service

Spotify is the biggest music streaming platform in the world, and moving away from that ecosystem will incur some difficulties. If you rely on Spotify Connect for some devices (I know I do) then you’ll lose access to that. You’ll also lose access to the massive library of music that Spotify has in its possession, meaning that you might lose out on access to some of your favorite tracks wherever you switch to. You’ll even lose access to Spotify Wrapped for 2022, though other platforms are beginning to test their own versions of displaying fun statistics too, and you can always create a Last FM account and link up with that to track your music.

If none of that matters to you, or if you think you can find alternatives to what you’re going to miss out on, then it might be easier than you think to switch. There are a lot of services that try to make it as easy as possible to do so.

If you use YouTube a lot or even have a YouTube Premium subscription that you’re looking to make use of, then YouTube Music might be a service worth checking out. Switching from Spotify to YouTube Music isn’t a difficult endeavor, and the best application for the job is TuneMyMusic. Simply select your source platform, your destination platform, and let it transfer it for you. You don’t need to own the Spotify playlist either, it simply just needs to be public. 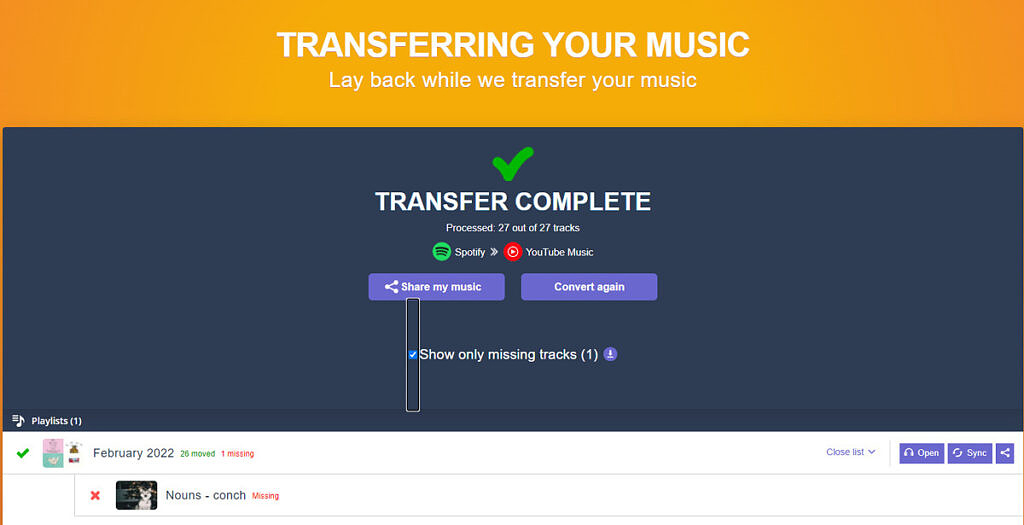 Sometimes, it won’t be able to find tracks, but generally speaking, you can then find them and add them yourself. I’ve had pretty good experiences with using this service to switch to platforms in the past, and you can typically fill in the gaps yourself.

How to switch from Spotify to TIDAL

If you want higher quality audio than most services, then TIDAL is likely the way to go. The service’s HiFi tier is at a much higher bitrate than most competitors, and its HiFi Plus tier has some Master Authenticated Quality audio. Even better is that TIDAL is one of the easiest services to switch to from Spotify, as it officially supports and promotes both TuneMyMusic and Soundiiz. You can check out TIDAL’s page for playlist importing to learn more, but it’s a pretty easy process and one that I completed myself in minutes a few months ago.

How to switch from Spotify to Apple Music

Switching from Spotify to Apple Music makes sense if you use a lot of Apple devices, and it integrates into the Apple ecosystem exceptionally well. Features that were once unique to Apple Music such as offline playback on Apple Watches are no longer an Apple Music exclusive, but additional features of the platform such as the voice-only plan that only plays on Siri-powered Apple devices certainly is. Apple also has a lossless audio quality option that Spotify doesn’t have.

On iOS, you can use TuneMyMusic or SongShift. SongShift is an iOS-exclusive app that does the same thing as TuneMyMusic, except that it runs on your phone.

Once you install SongShift, simply login to both your Spotify account and your Apple Music account. Select Spotify as your source and choose the playlist(s) you want to transfer, and then select Apple Music as your destination. The app can then find and match the tracks that it thinks are in your playlists, and if you find a mistake, you can change it here before completing the process. Once done, log in to your Apple Music account and you’ll see that everything has transferred!

If you’re looking to switch to a less mainstream streaming service, then you’ll likely want to take a look at Deezer, Pandora, or any of the other smaller services. Be sure to check out our list of the best music-playing apps on Android to get a sense of what’s out there. You can make use of SongShift or TuneMyMusic, and a combination of both should do the trick to move over your playlists. It entirely depends on what service you’re going to switch to, though!

Which service did you switch to?

If you decided to switch away from Spotify, what service did you settle on in the end? It makes sense for Apple users to switch to Apple Music, and audiophiles may be more inclined to move towards something akin to TIDAL. Let us know in the comments!

The post How to switch from Spotify to YouTube Music, TIDAL, Apple Music, and other services appeared first on xda-developers.