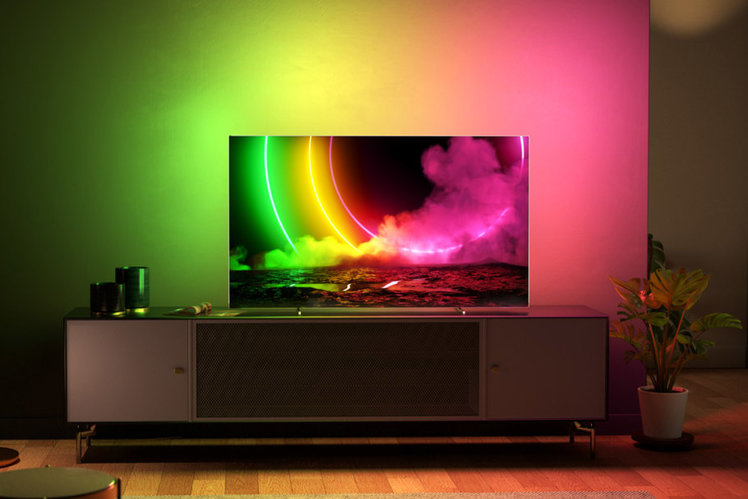 Ambilight is a popular technology on Philips TVs, allowing you to spread the colour from the screen across your walls. The aim is to increase the immersion and make more of an event of what’s happening on the TV – and it also looks cool.

Thanks to close ties between Philips TVs and Philips Hue, there’s also the ability to sync Hue lights, to extend that Ambilight experience through more of the room. If you’re the sort of person who already enjoys these coloured lights, this option turns the dial up to 11.

If you have an Ambilight TV, you’ll know that there are a full range of controls for Ambilight – you can get it to follow the video, the audio, or fill the room with static colour.

There’s also an option called Ambilight extension, which is what we’re interested in here, as that’s the gateway to Ambilight+Hue. Note that we’re not talking about Hue Sync which needs a separate box, we’re talking about the built-in capability of Philips Ambilight TVs.

There are a couple of things you’ll need. Firstly you’ll need a compatible Philips Ambilight TV. That covers most of the Ambilight models from the last few years. We used the award-winning Philips OLED 806 in writing this guide.

Next you’ll need a Hue Bridge – and you’ll want the latest version of the Bridge, rather than the previous generation which doesn’t support as many functions. Importantly, it’s the TV that has to connect to the Bridge to link into the Hue system.

Finally you’ll need some Hue lights. These need to be colour lights, as it’s colour that you’re spreading. If you only have Lux/white bulbs then you can’t use them. The system also works with Hue lightstrips if you’re planning a grander installation. Note that if you’re starting from scratch, you might be able to save some money by buying a starter kit including bulbs and the Bridge.

Before you get started, there’s some preparation you’ll need to take care of. First of all, you need to make sure that your Hue bulbs are all setup and connected to the Bridge. You’ll need to install the Hue app on your phone, but you don’t actually need this for the link to Ambilight.

Secondly, you’ll need to make sure that your TV is setup and connected to your network.

How to link Ambilight and Philips Hue

The starting place is on your TV:

1. Head into your TV settings – this is usually found by pressing the home button.

This is where you’ll setup the connection to the Hue lights.

3. Hit the Start button and your TV will scan for the Hue Bridge.

4. Once the Bridge is detected, you’ll have to select it and you’ll be guided through connecting to the Bridge, by pressing the button.

5. You’ll then be invited to connect compatible Hue bulbs from the list on the TV.

6. Select the bulbs and they will flash to show they are linked.

That’s not the end of the process, however, as you still need to configure those bulbs to make sure they behave correctly with the TV.

7. Select the linked bulb from the list to Configure Now.

8. The bulb will flash and you’ll then confirm it’s the correct bulb.

9. Then you can set the location relative to the TV and the brightness.

10. Repeat for any additional Hue lights.

The configuration is important, because you need to let the TV know where the lights are in relation to the main image so it can match up the colours. The brightness also means you can have a more subtle effect further away from the TV so you’re not dazzled by lights elsewhere in the room.

What about using Hue lights without the TV?

It’s possible to use Ambilight+Hue but also have Hue work independently. When you look in the Hue app, you’ll see that those bulbs are labelled as “sync” – so they’re being controlled by something else (in this case the TV), when the TV is on.

But when the TV is off, those bulbs are released again to work as normal.

That means you can still have a Hue setup in a room without it being limited by the TV when the TV is off. For example, if you have Hue in your living room, you can turn that group on and it will function as normal – it’s only when you turn on the Ambilight TV that those bulbs will then be taken over by the TV.

You could, easily, have some bulbs that only work with Ambilight, leaving room lighting separate – and this is easy to control through the Hue app and the setup we’ve detailed above from a Philips Ambilight TV.