Ubuntu 22.04 Jammy Jellyfish now is in final beta stage! Here’s how you can upgrade to the new LTS from Ubuntu 20.04!

NOTE: the steps below now will upgrade to Ubuntu 22.04 Beta at the moment. Though, the beta will be upgraded to the final stable release automatically in next month by running regular updates.

Before getting started, there are some things need to do first! They are important to prevent upgrade failure.

2.) Disable third-party PPAs. This can be done by launching ‘Software & Updates’ utility and navigate to ‘Other Software’ tab.

3.) Also in ‘Software & Updates’ tool, navigate to ‘Updates’ tab. There choose ‘Notify me of a new Ubuntu version: For long term support versions‘.

4.) Remove proprietary drivers from ‘Additional Drivers’ tab, and use an open-source driver instead. You may skip this step if your PC does not have a dedicated GPU.

5.) Remove other Desktop Environments! If you have other desktops (e.g., KDE, XFCE, Cinnamon), it’s better to remove them, so to speed up the upgrade process.

NOTE: The upgrade process may fail! If you can’t afford to have a broken system, please do a clean install instead of upgrading it!

1.) Firstly, press Ctrl+Alt+T on keyboard to open terminal. When it opens, run the command below to install all available system updates:

And, restart your computer if you have not run system updates for a long time.

2.) Next, in terminal run the command below to run update manager to check distribution update:

If there are still available updates or removals, click on ‘Install Now’ and re-run the command.

3.) Once you see the prompt for Ubuntu 22.04. Click on “Upgrade” button, and confirm in the next ‘Release Notes’ dialog. 4.) It will pop-up another dialog asks to confirm via ‘Start Upgrade’ button. Once you click on it, the ‘Distribution Upgrade’ wizard will pop-up indicates the upgrading process. 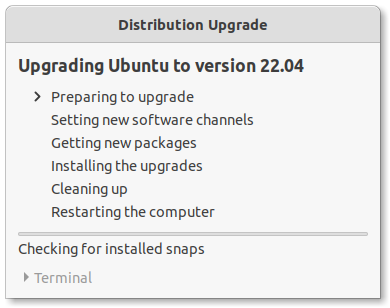 5.) Don’t go far away from your computer!! There will be a few more confirm dialogs, so you have to keep an eye on the screen.

If everything goes well, there will be a dialog asks to “Restart” to complete the upgrade.

Sadly, I went out when it was ‘Getting new packages‘. And the upgrade process failed at blank screen when I was back! So there’s no screenshot for this step.

There may be various reasons that the upgrade failed. Here are the issues in my case.

As mentioned, the upgrade failed in my case and the laptop run into blank screen. And, I did following steps that successfully finish the upgrade.

2.) Once logged in, try running command to configure unfinished packages:

3.) And, try to fix broken dependencies via command:

In my case, some third-party packages (e.g., libfilezilla12 from xtradeb PPA, and libreoffice-common from LibreOffice Fresh PPA) break the dependencies! And, the command failed with something look like:

trying to overwrite ‘…’, which is also in package libfilezilla12 0.27.1~extradeb1
Errors were encountered while processing:
…
E: Sub-process /usr/bin/dpkg returned an error code(1)

Then re-run the sudo apt -f install until it’s done successfully without error!

If everything goes well, clean up via command:

5.) Some packages are however missing in my case after restart. They were fixed by manually installing the packages via the commands below.