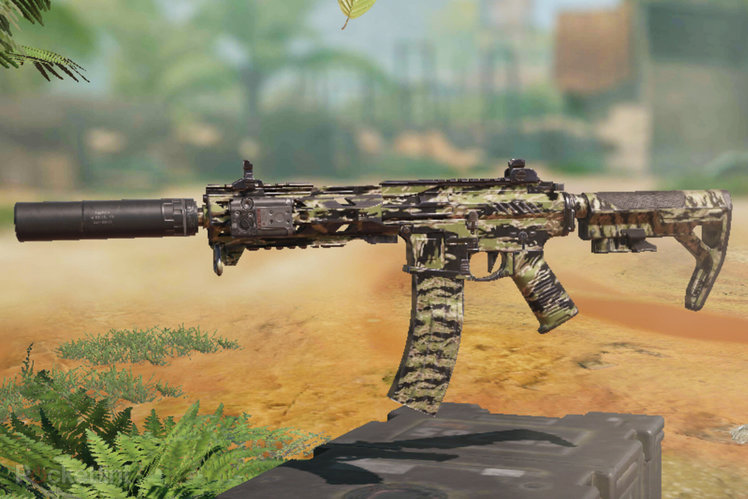 Call of Duty: Mobile has seen some big changes in season 9 of the game. One of the big things is the introduction of Gunsmith.

Here’s how it all works so you can make the most out of Gunsmith.

Gunsmith is an advanced customisation option in Call of Duty. In the Mobile version of the game you’ve been able to add accessories to your weapons since the game launched. That might be an extended magazine, a suppressor or stock, each changing the look and characteristics of a weapon.

Gunsmith makes modifications much more widely available, increasing the options manyfold. Previously there were skinned versions of weapons you could earn (and there still are) but customising your weapons is now a lot more interesting.

The Gunsmith option is in the loadout section of the game. As we said in the introduction, this has expanded to 10 slots, meaning you can effectively enter any match with a choice of 10 different loadouts. That’s loads of space for customised weapons!

From the opening screen, just tap on “loadout”, then tap on the weapon. This will take you through to all the weapon options divided into categories – assault, sniper, LMG, etc – and once you have an weapon equipped you can then fully customise it by tapping on the Gunsmith button.

Why are some of the options locked?

You might find that some options for a weapon are locked. That’s because you haven’t upgraded that weapon enough to access those options. Previously weapon upgrades didn’t go too far, but they are now hugely expanded because they include all those extra options that Gunsmith enables, meaning everyone will have to upgrade weapons further to get all the options.

You can either hit the upgrade button at the top of the screen and use your Weapon XP cards earnt through the Battle Pass to unlock these, or you can play more matches with that weapon.

You’ll find that the weapons you use a lot get upgraded faster because you basically unlock levels as you use them. If you run out of XP cards, just play more with a weapon and you’ll soon get to all the customisation options.

Can I modify skinned weapons?

Yes. If you’ve previously unlocked or been rewarded skinned weapons in particular events or seasons, you can still access those. That means you can have a custom version of a rare or uncommon skin.

Head into the weapon Gunsmith page and tap on “camo”. You’ll there see options at the top for the “rare” or “uncommon” options which are previous skins you’ve been rewarded.

What should I be upgrading?

Now let’s get into the meat of things. There’s chart on the right-hand side of the Gunsmith page that shows you the stats for each weapon – damage, accuracy, range, fire rate, mobility, controls – and you can have up to five “attachments” for each weapon.

These ratings will change based on the modifications you make to your weapon. Add a suppressor and the range will decrease, remove the stock and you’ll increase the mobility while decreasing the accuracy.

The changes you make will depend very much on how you want to play with that weapon and that might change from map to map. On small maps like Shipment 1944, mobility and the magazine capacity are important so you can be fast and reduce the number of magazine changes – so changing an SMG for this is ideal for Gunsmith.

You’ll see how the weapon parameters change as you make modifications. If you’re stuck, tap on the little lightbulb for some suggestions, but it’s best to use trial and error. You can also save several different modified versions of weapons. You can then access those versions by tapping on “blueprints” at the bottom of the page.

Finally there are also perks to consider. These are unlocked as you upgrade weapons which add some bonus skills. Sometimes a perk is a better option than one of the physical weapon changes and well worth investigating too.

Once you’ve made all your changes make sure you save your new perfected weapon – and be sure to equip it to your character too.

Using Events to your advantage

The Events system is divided into three sections – Featured, Seasonal and Daily. These are essentially tiered tasks you can complete to gain rewards. Just logging in will grant you daily rewards through the month and one of the useful things here is weapon XP cards. These can be used to upgrade weapons and unlock options in Gunsmith.

The Featured events usually focus on whatever is new in the season as do the Seasonal events. Both can also give up a number of rewards, but in some cases you’ll have to pay close attention to what’s required to qualify. But, it’s worth it to gain those rewards and make those Battle Pass XP progressions.

Get to grips with Battle Pass

The Battle Pass is essentially a range of free rewards you get for playing and progressing in the game. There are two versions, the Battle Pass and the Premium Pass that you have to pay for.

The Premium Pass gives you access to more of these rewards, more weapon skins, more characters, emotes and even some CP returns for hitting specific levels, but with Gunsmith, some of those weapon rewards are less important because you can choose what you want.

Ultimately, however, Gunsmith offers a lot of options without having to pay and real money – just play more and the options will get unlocked.