When it comes to Windows 2-in-1 convertible laptops, you usually see that Windows devices come with detachable keyboards or a 360-degree hinge. This helps you use them in various modes. Some of the best HP laptops and best Surface devices are like this, including the HP Spectre 360 and Surface Pro 8. But HP and Microsoft recently changed up how we think of the 2-in-1 form factor.

That’s why I am not talking about the HP Dragonfly Folio G3 and the Surface Laptop Studio. Both of these devices use the folio from factor and have what’s known as a pull-forward screen. You can pull the screen out towards you, rest the front of it on the keyboard deck, or rest it down to create a Windows tablet. They share the same design in that way, but when it comes to performance and other elements, there’s a natural contrast. I’ve put together this guide which looks at various categories to help determine which one is best for your money.

Performance: The HP Dragonfly Folio G3 is a generation newer, but lacks a GPU

Performance is all important when considering a laptop. In the case of the HP Dragonfly Folio G3 and the Surface Laptop Studio, though, there’s a significant difference. The HP Dragonfly Folio G3 sports a generation of newer Intel CPUs, but lacks a dedicated GPU and is lower-powered. The Surface Laptop Studio, meanwhile, has an older generation CPU but has the option for a dedicated GPU and higher-power H-class chips. 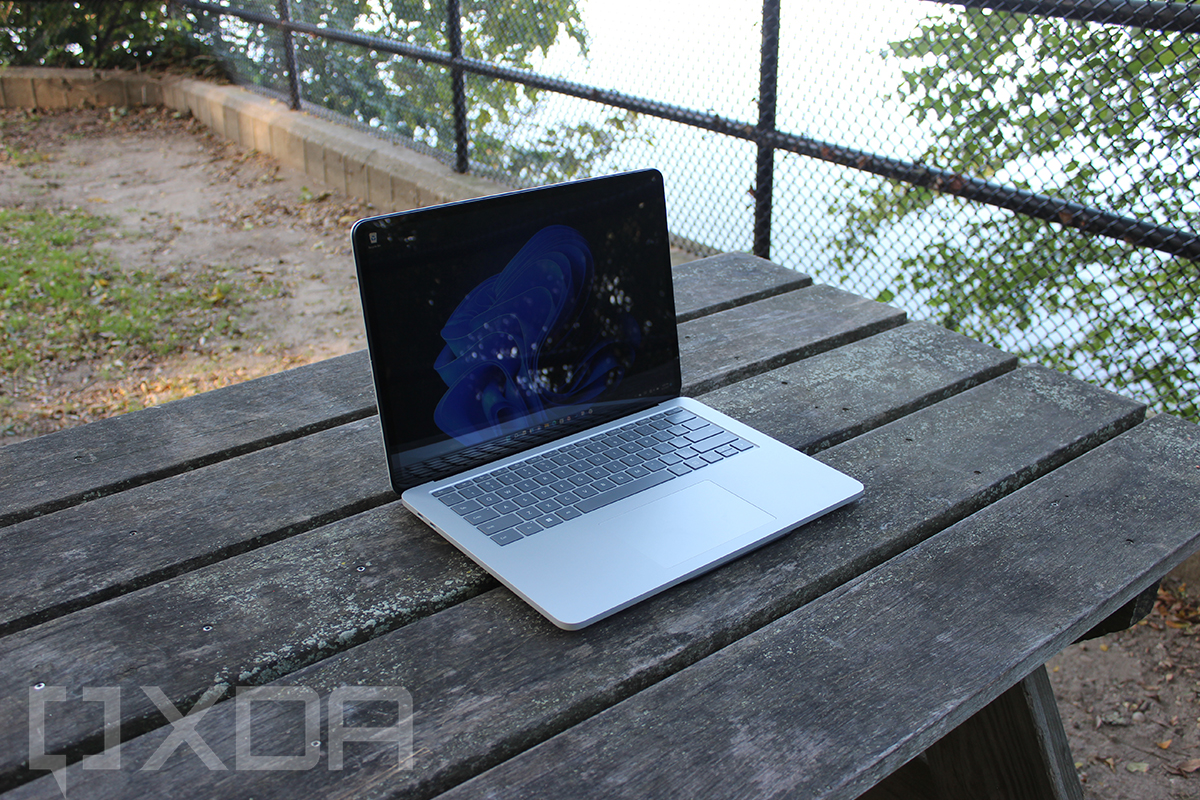 It’s not to say the Surface Laptop Studio is a bad-performing machine or the HP Dragonfly Folio G3, either. Intel’s 12th generation CPUs bring advancements with efficiency cores and performance cores, for better multitasking, so that gives HP the upper hand in one area. You’ll miss out on that on the Laptop Studio, but the 11th generation Intel quad-core H-class chips are still plenty powerful and remain the most powerful chip yet in a Surface device.

In the case of the Folio, though, web browsing should be great, as well as any office work. After all, the intended audience is business, and not gamers and video editors. Also of note is that while the processors in the HP Dragonfly Folio are newer, they’re coming from Intel’s U-series. These are much lower-powered chips designed to run at 15 watts. You’ll get much longer battery life than you can on a Surface Laptop Studio for that reason. The chips are less power-hungry.

Display and sound: Surface Laptop Studio is better and faster but less vibrant

Now, for display and sound. In these areas, I’ll be giving the Surface Laptop Studio the win. I say that because the Laptop Studio has a bigger display, Omnisonic speakers, and has an advanced refresh rate, and nifty in-display technology. Of course, coming with an option for an OLED panel, the Folio is great, too. But more on that later.

The display on the Surface Laptop Studio is a common glossy LCD type. It’s big at 14.4 inches, and has a decent 201 PPI and lower 2400 x 1600 resolution. I really liked the color accuracy, as it hit the 100% sRGB, 80% NTSC, 83% Adobe RGB, and 87% P3 color gamut. OLED laptop panels like the one on the HP Folio are much better in terms of color accuracy, vibrance, and feeling immersive, though. Overall, the display on the HP Folio will be better for media consumption and day for that reason. It also has a higher resolution, 3000 x 2000, and more pixels per inch at 267. 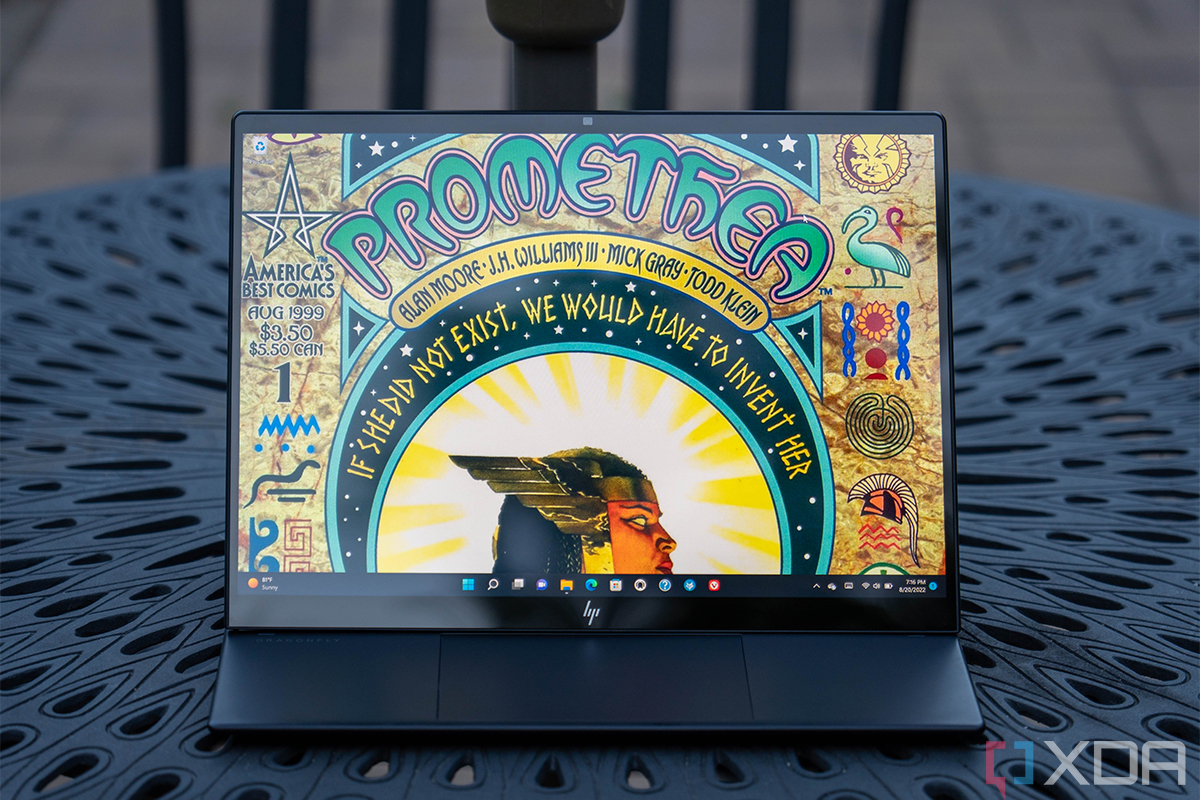 Where the Surface Laptop Studio excels over the HP, though, is with the display technology. The Surface Laptop Studio has a better refresh rate of 120Hz. This means that when scrolling through webpages and other content, it will feel much smoother. Even Windows 11’s little animations should come to life. For those who are into video editing, that refresh rate is key to avoid feeling lag when scrolling through an editing timeline, for example.

The other thing that makes the Surface Laptop Studio great are the haptics. If you buy a Surface Slim Pen 2 and use it with the screen, you’ll get small taps on the pen, and feedback as you ink on the screen. If inking and drawing are important for you, then keep this in mind. As I’ll explain later, the HP Dragonfly Folio does have pen support, too, but not with this same technology.

With speakers, I choose the Surface first. Microsoft’s using Omnisonic speakers. These speakers are hidden under the keyboard, without the need for a speaker grill. As someone who owns one, I’ve found that the Surface Laptop Studio is able to adapt those speakers, too. If you switch between the various modes, the audio will play from different speakers based on the orientation of the device.

Both the HP Dragonfly Folio and the Surface Laptop Studio share the folio design. You can pull their displays out towards you to use the devices in a laptop, stage, or studio mode. That’s just about where the similarities end, though.

Generally speaking, the HP Dragonfly Folio will feel like a more premium device. It has a black faux leather top and a magnesium finish on the bottom. The Surface Laptop Studio, meanwhile, is just made out of magnesium and aluminum on the casing just like an ordinary laptop in 2022. 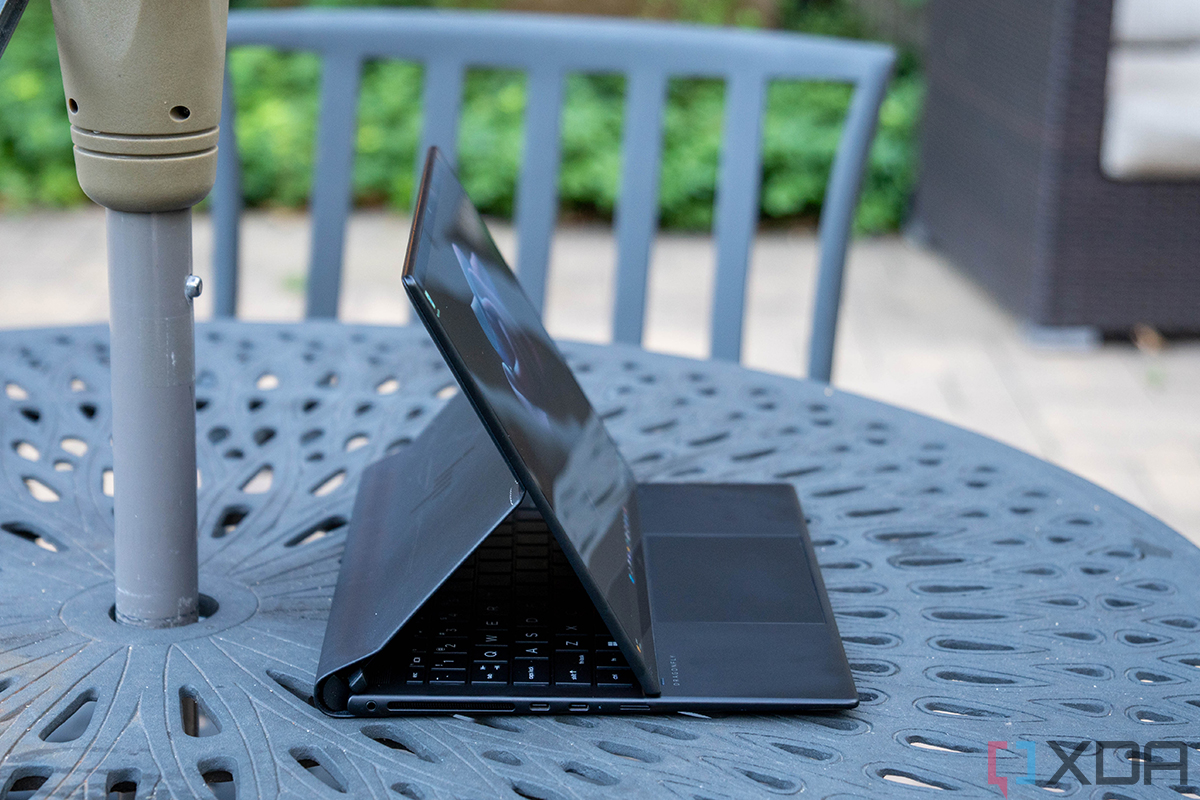 It’s two different materials that can show in their weight and dimensions. The HP Dragonfly Folio G3 is lighter for that reason. It weighs in at 3.09 pounds, versus the 3.83 pounds on the Surface Laptop Studio without a GPU, or 4.00 pounds on the model with a GPU.

It’s hard to beat what Microsoft has done with their Surface Pen, Surface keyboards, and trackpads. They’re the best you can find in a laptop in 2022. I own a Laptop Studio and I found that the plastic keycaps are quite responsive during typing marathons (like writing this story,) and I also love the backlighting. From what I can tell from using HP’s other laptops, HP’s keyboards are great, too, with great key travel.

But the non-traditional trackpad on one of these devices is what matters here. Microsoft’s Surface Laptop Studio was one of the first mainstream consumer-focused Windows devices to use a haptic trackpad. This used to be a MacBook-only feature, but it’s now come over to the XPS 13 Plus and several other Windows laptops. The Surface Laptop Studio does trackpads better than the HP Folio for that reason since the HP Folio has a traditional non-haptic trackpad. Dragging and dropping content, is a pleasure on the Laptop Studio. 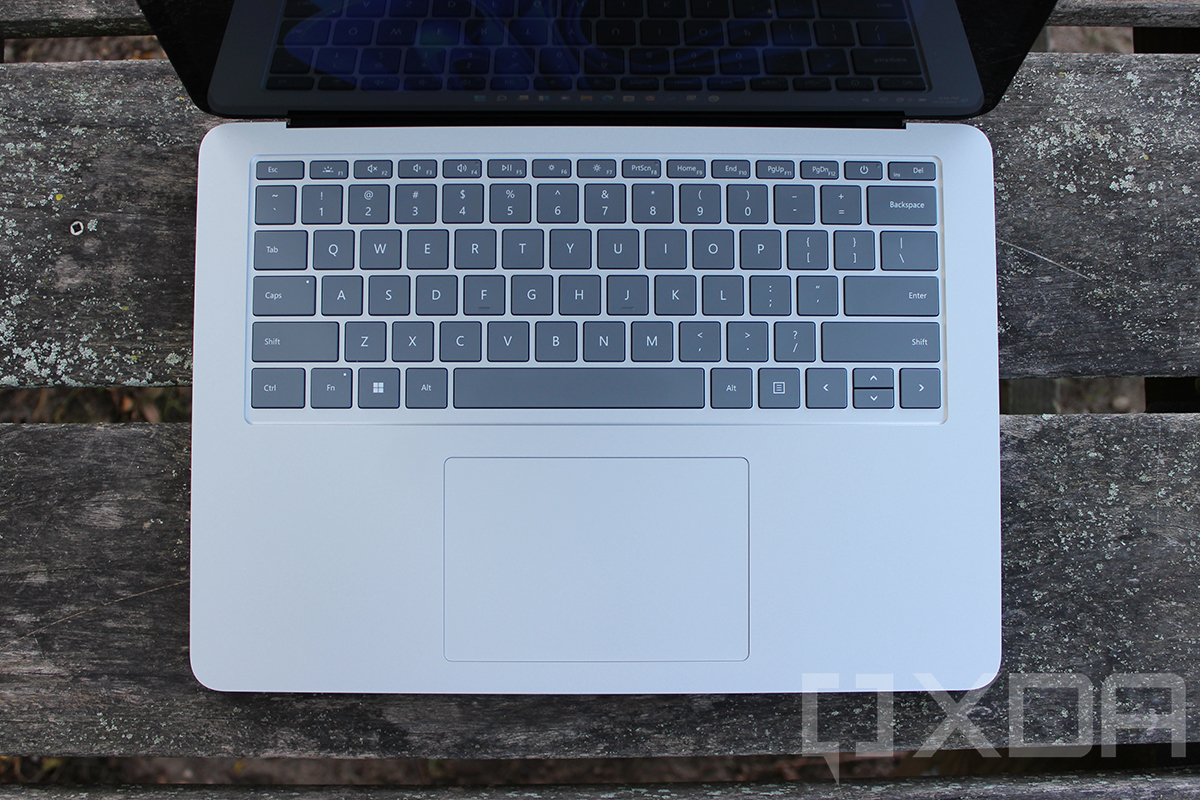 As for pens, I already highlighted how the Surface Slim Pen 2 supports haptic feedback. It’s a slimmer and thin pen that I think not be comfy for everyone. The HP Dragonfly Folio G3, meanwhile, has a more traditional rounded pen, which some people might prefer for long-term drawing. In both cases, the pens are optional purchases.

Webcam, ports, and connectivity: We go for the HP

In looking at the webcam, ports, and connectivity on these devices, I’ll go for the HP Dragonfly Folio G3. There are a few reasons why. First of all, the webcam is rated higher at 8 megapixels, which is important for those who are spending more time at home and want to look the best for Zoom calls. Second of all, the HP Dragonfly Folio G3 has the benefits of 4G LTE and 5G, which the Surface Studio lacks. 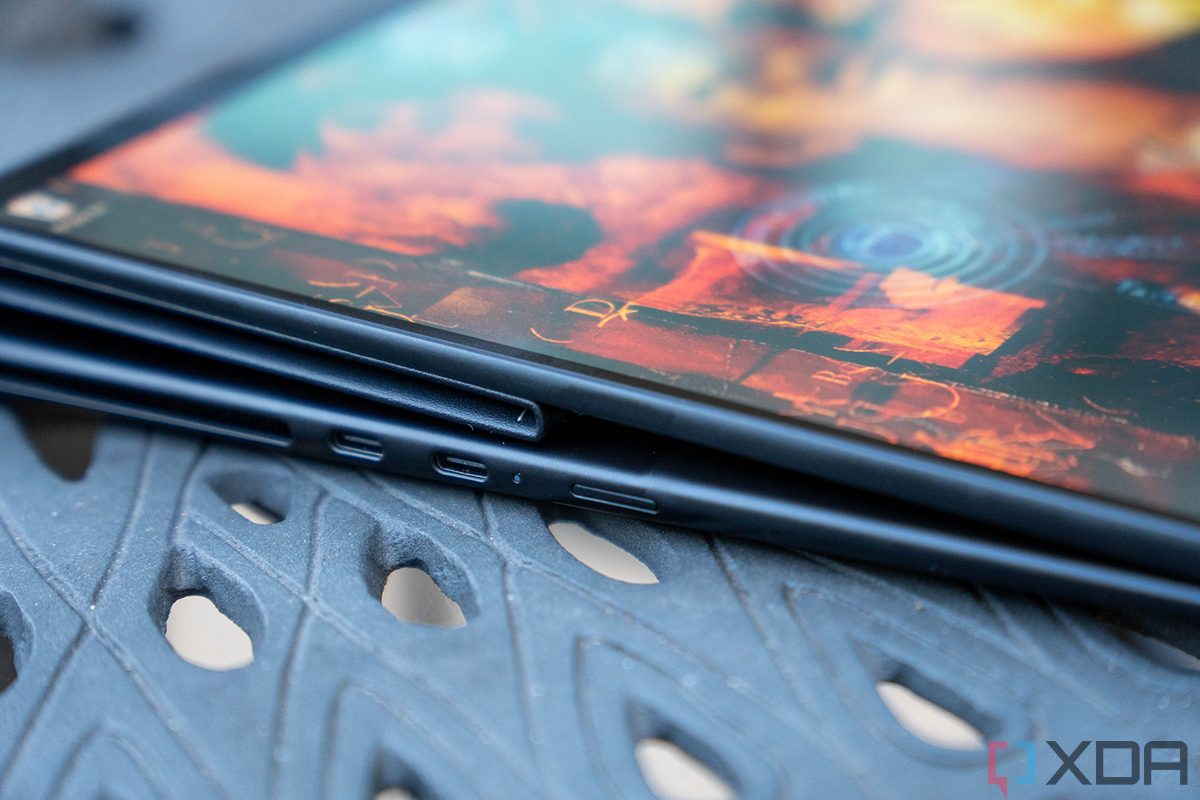 This might be important for people who are on the go and don’t always have Wi-Fi. The last thing to mention has to do with charging. While both devices have USB-C and Thunderbolt 4 for connections to eGPUs or even charging and multiple displays, Microsoft includes a proprietary Surface Connect port on their Surface. This means you can keep one of the USB-C ports on your device free for other important things during charging. I always liked this about Surface devices.

If considering buying either the Surface Laptop Studio or the HP Dragonfly Folio G3, then I suggest you pick the one that best fits your needs. It’s a relatively even draw between the two devices, with a few exceptions. That includes display technology, newer CPUs, the option for a GPU on the Surface Laptop Studio, and the overall design materials as well as the pen. Both are still great buys, and you can check them out below. 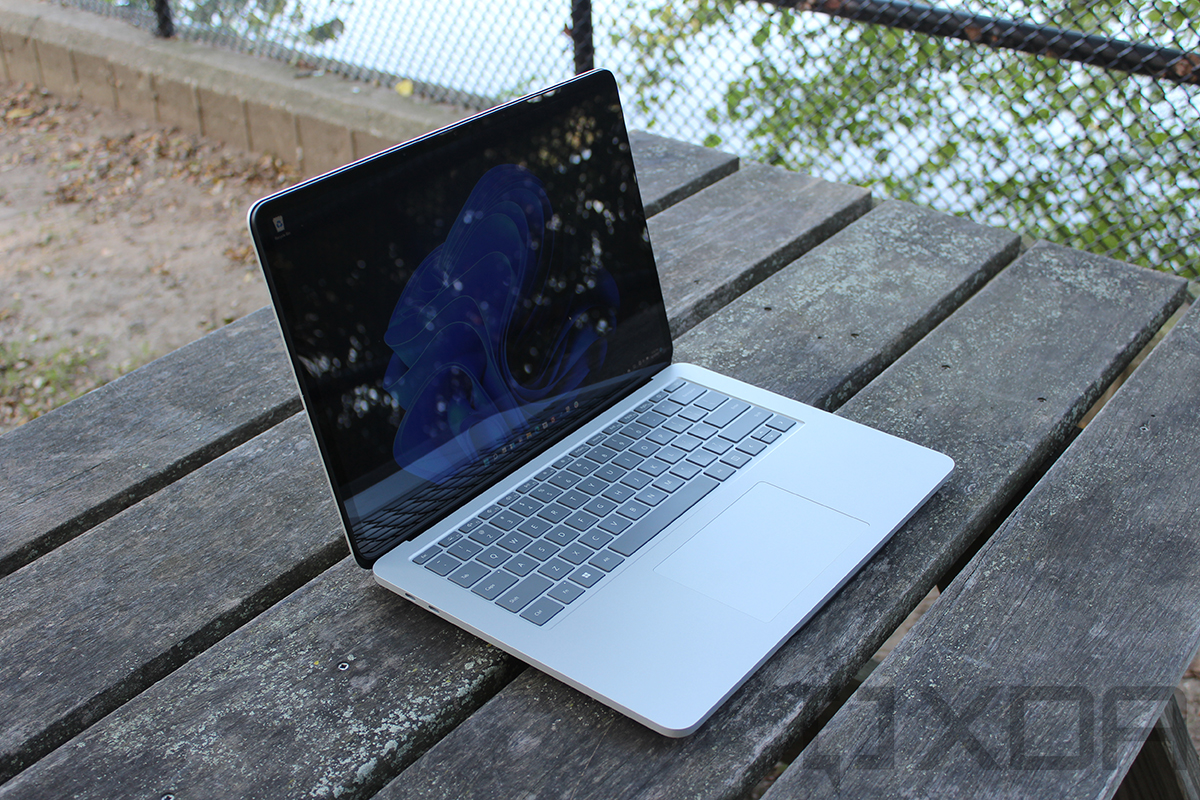 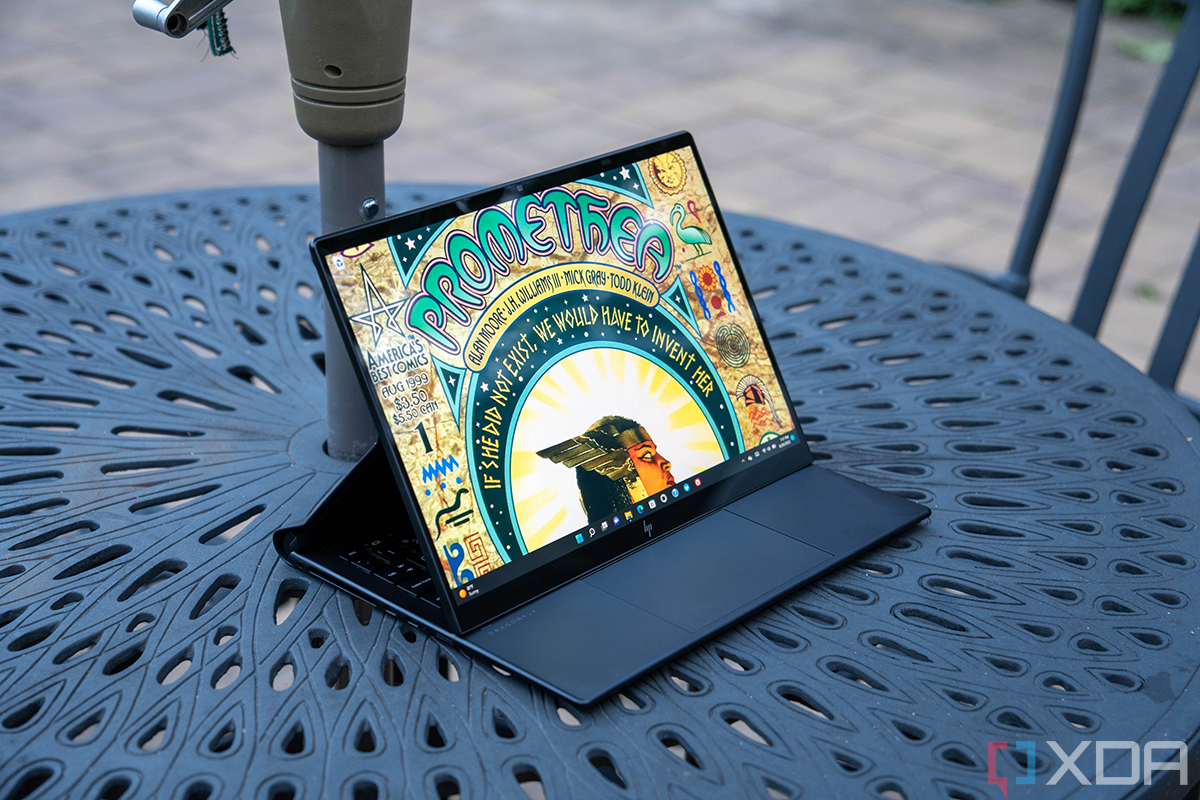 HP Dragonfly Folio G3 is a luxury of a laptop, with a beautiful OLED screen, and faux leather finish

The post HP Dragonfly Folio G3 vs Surface Laptop Studio: Which one is best? appeared first on XDA.