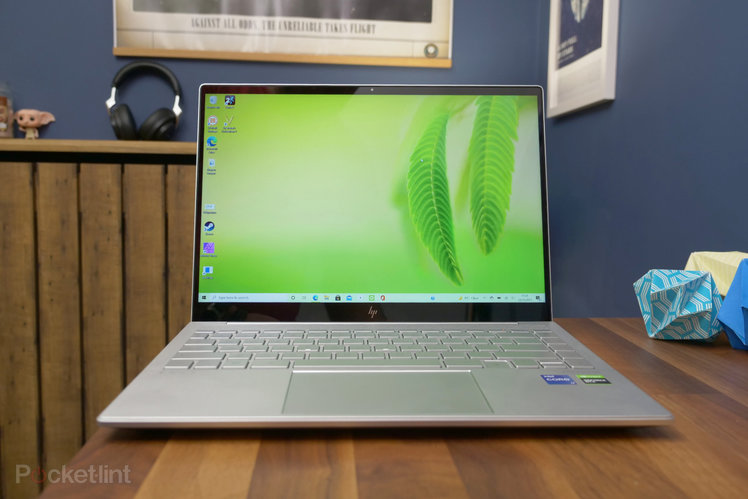 Now and arguably more than ever before, laptops and portable computing devices matter. With flexible working becoming part of everyday life, having a solid laptop to get stuff done on is vital. Whether it’s for at-home use, or for when you’re on the move.

HP’s Envy range is a series of notebooks that attempts to be everything to everyone. The Envy 14 on review here is thin, lightweight, powerful, and has a good battery life too. Is there anything not to love?

Over the past few years we’ve seen PC makers adopt a much more premium approach to design. Plastic and bulky devices have been ditched in favour of sleek and attractive metal. The challenge, however, has always been to make a notebook that’s easy to carry around – meaning slim and light – without losing any important functionality. 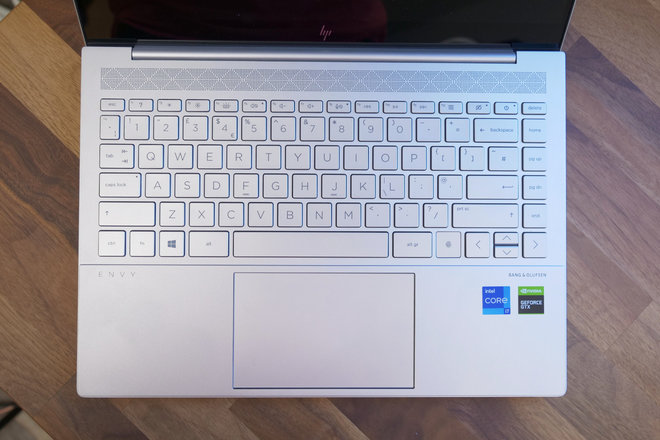 With the Envy 14, HP has taken a sensible and attractive approach, without any real compromise. You get a sleek, portable machine – but you don’t have to give up many precious ports. It has virtually everything you need built into its angled chassis, and there’s lots to like here from an aesthetic standpoint too.

The footprint of the Envy 14 is small, thanks to not having excessive borders around the keyboard and the display. You get a full-sized keyboard, but with only a slim gap between that and the edge of the case. The speakers run along the top of the keyboard, hidden beneath a grille of machined micro holes arranged in a repeating triangular pattern.

That pattern fits in with the overall motif, with the Envy featuring virtually zero curves anywhere. It’s all flat lines and angles, including on the underside where you’ll see the body slanting upwards towards the flat edges, hiding two more triangular grilles for additional speaker sound.

On the underside you’ll also find two long and slim rubber rests. These are designed so that when you place the laptop down on a desk or table, it sits at a slight angle and leaves a little gap between the bottom of the machine and the surface it’s sat on. That ensures there’s airflow underneath the large rectangular grille to help with cooling. There is also a vent along the inside of the laptop display hinge, as is customary for most laptops. 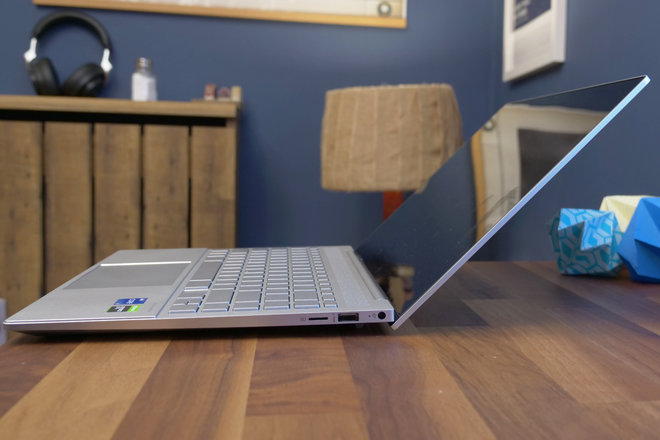 That hinge is adjustable to a high degree too. It’s not 180-degrees, so you can’t lie the screen completely flat, but it goes far enough back that you’ll never complain about its position. And this holds a screen/lid that’s impressively slim, and a display with attractive black framing around all four sides. While not completely edge-to-edge, the framing is slim enough that it forms a minimal and unobtrusive bezel around the panel.

There are other subtle details we like too. The wrist rest and touchpad being at the same level as the tops of the keys, so when the laptop is shut its keys aren’t being pressed down. And that means HP hasn’t been forced to put in a too-thin keyboard. Instead, the keys have good travel and a subtle clicky response that’s among the quietest we’ve used. It’s easy to type on, and won’t annoy anyone working in the same room as you.

Everything about the way this laptop has been design seems very purposeful. There’s no stray detail left unconsidered. Even the small lip that exists all the way along the front edge, to make opening the laptop easy.

As for ports: there are a few of those. There’s a 3.5mm headphone/mic port, a full-sized HDMI 2.0 port, one USB-C/Thunderbolt 4 port, and two 5Gbps USB-A ports. You also get the proprietary charging port for fast-charging speeds – 50 per cent in 30 minutes – and a microSD card slot.

If we were in a complaining mood, we’d say we’d like to see an additional USB-C/Thunderbolt port, plus Ethernet and full-sized SD card slot. It would take it from having most useful ports, to being a zero-compromise offering. But so few laptops are like that these days – there are far more expensive devices out there with fewer ports than this, so we shan’t complain.

While it might not set your heart racing with the top specifications – in terms of resolution, frame rate and brightness – the 14-inch display on the Envy 14 is still very good. It’s a Full HD resolution panel, but because it’s a 16:10 aspect ratio (rather than 16:9) it maintains the pixel density right across that width. That essentially means you keep the sharpness and gain a little extra height.

That extra height is useful if only because it helps the screen feel like it’s not just for full-screen video watching. It gives you the breathing room your content needs to display the taskbar and various toolbars without eating too much into your actual content. It’s also a more visually pleasing ratio, ensuring the screen doesn’t have that elongated or squashed look to it.

As screens go, it’s great for pretty much anything. Colours are vibrant without being oversaturated and dynamic range is good too. That means it’s ideal for watching movies or getting in some casual gaming or photo editing. Viewing angles are good, and it doesn’t lose much brightness or colour at all when viewed from different angles. 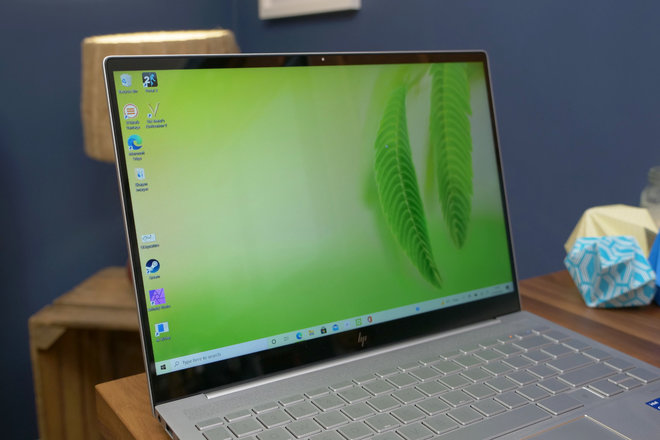 The only real downside of the screen is that it doesn’t have the pin-sharp appeal of a 4K or QHD resolution panel. It’s lacking that crispness you get from those higher-resolution displays, so edges of fine elements like text and icons on screen look a tiny bit fuzzy compared to those.

Still, it’s detailed enough that it’s not distracting. Similarly, for things like scrolling up and down lists, it could benefit from having an ultra-smooth refresh rate, rather than standard 60Hz. But both those things would push up the otherwise reasonable pricepoint and, we suspect, cut into the battery life practicality too.

As always with HP laptops, there are various configuration options – and that includes the screen. There’s a touchscreen option, which is on the model we reviewed. It’s one of those handy-to-have features – but not necessarily an essential one. It’s useful for quickly placing the cursor or selecting an item on screen.

There’s no nice way to say it, but the 720p webcam in the bezel of the HP notebook is bad. Details are ropey and it struggles with exposure and colours. So if your job involves a lot of video conferencing, and you care about how you look, you may want to look elsewhere – or buy a separate accessory.

With that said, the Envy 14 does include a few nice security features that not all laptops possess. Along the function row keys there are two dedicated buttons for switching the camera and mic access on or off. With the camera you can actually see a small white dot appear when you disable the camera, blocking the lens and making it unusable. Both keys have LEDs on them so that you can tell when they’re activated, just like the mute button and the Caps Lock key. 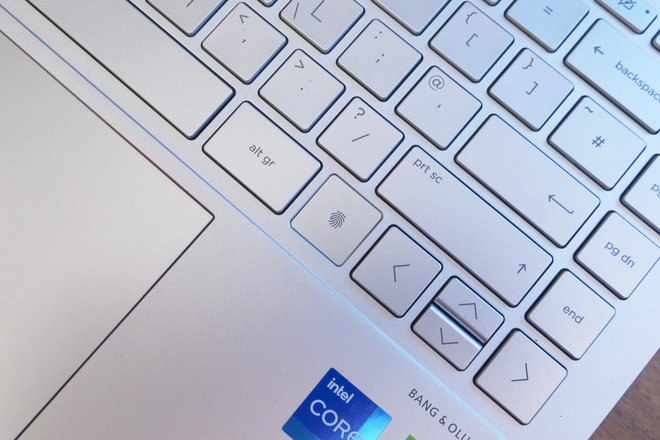 Then on the bottom row there’s a fingerprint sensor which makes logging into the laptop quick and secure. Because it’s the same colour and shape as the other buttons, it doesn’t look out of place either and sits in a position that’s easy to reach with your right index finger. It works with Windows Hello, so you never have to type in a password or PIN.

It’s unlikely any gamer is going to be looking at the HP Envy to satisfy their gaming needs, but in a world where more people are creatives and needing a machine that can comfortably whip up a social media graphic, or edit photos, even standard laptops need to be more capable than they ever have been. The Envy 14 caters for those.

Regardless of whether you go with 512GB, 1TB or 2TB storage, you’ll get M.2 SSD with fast read and write speeds. In everyday use that means when you transfer files, or install apps and programmes, it’ll do so relatively quickly. Using UserBenchmark to test those speeds we got results above 1500MB/s for sequential reads and over 1100MB/s write speeds. 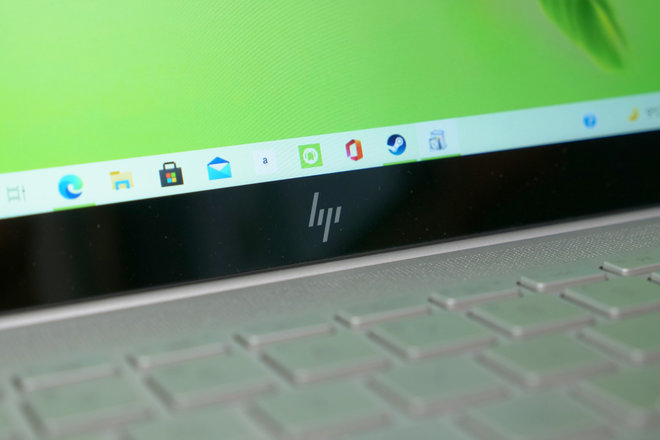 That fast storage is backed up by a pretty speedy Intel Core i5 or Core i7 processor. Our own review model is the 11th Gen Core i7, which kept up with pretty much all of our daily tasks. Unplugged, with the laptop in its “better battery” setting, it was more than enough to keep up with daily work.

In this mode we edited, cropped and adjusted large JPEGs in Affinity Photo for reviews, and found it coped without a struggle. And that’s without it being in its highest performance setting. Then, plugged in, you can get a bit more oomph, to help with more intensive tasks like doing a cheeky spot of casual gaming.

We were comfortably able to play games like Train Sim World 2 and Good Life on Xbox Game Pass. However, there were obvious signs that the Envy 14 isn’t a top tier gaming machine. Panning or moving through a scene quickly would often result in a little frame dropping and aliasing on the screen where you see lines as the animation is trying to catch up with the motion. 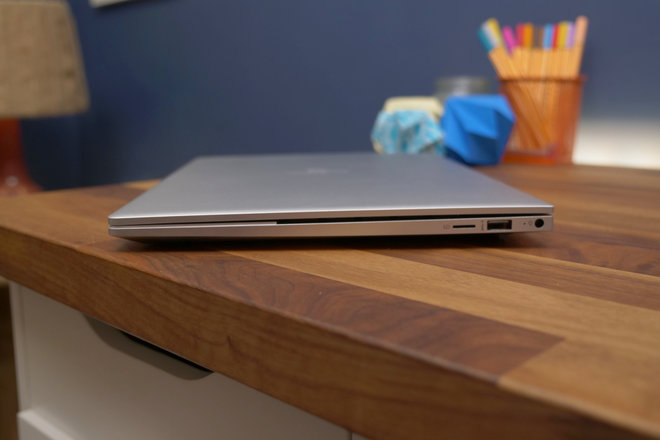 In its ‘best performance’ mode we’d find the fan would kick in – something that otherwise rarely happened when unplugged. It’s only really when plugged in and playing games that you’d ever really hear the fan. And most of the time it’s relatively quiet.

Battery life is similarly reliable. We found we could easily sit and work for four hours and still have a more than half of the battery left over, and that’s without it being in its most battery efficient setting. Without doing too much intensive work, we have no doubt a full battery could comfortably get us through a full day’s work.