When we asked HP to send us a low-cost rig for potential entry into our best budget gaming laptop roundup, it picked a £1,099 model featuring a 2.9GHz AMD Ryzen 7 4800H processor and an Nvidia GeForce GTX 1660Ti GPU (with 6GB of RAM).

That’s not the cheapest gaming laptop the firm makes but it is the lowest cost machine in HP’s gaming-specific Omen range and the CPU and GPU are accompanied by 8GB of RAM, a 512GB SSD, and a 1,920 x 1,080, 144Hz display.

I’ve always liked the look of the Omen series and this model is no exception. The latest Omens look very smart in their all-black livery with a two-tone metallic diamond on the lid.

The build quality doesn’t quite match the appearance. Like the Acer Nitro 5 AN515-44, it’s a pretty plastic affair and both the body and lid have some flex to them, especially the latter. The aluminium palm rest and keyboard deck add a hint of quality to proceedings, though, and give the part of the Omen that you actually touch a cool, quality feel. Usefully, the lid tilts back to 180 degrees, something budget gaming laptops rarely do. At 358 x 240 x 22.5mm and 2.3kg the HP is bang average, though. Physical connectivity is comprehensive with three USB-A 3 ports, a USB-C port that also supports DisplayPort 1.4, dedicated mini-DisplayPort and HDMI 2 video outputs, plus a drop-jaw RJ45 Gigabit Ethernet connector. There’s even an SD card reader and a 3.5mm audio jack. There’s no Thunderbolt connector, however; for that, you’ll need to buy one of the Intel-powered Omens. I have absolutely no issues with the Omen’s keyboard. It’s solid, quiet and eminently precise. The keys look a bit small at first glance but they’re actually 15mm square just like those on the Asus TUF Dash F15 – our favourite budget gaming laptop.

It’s an optical illusion caused by the rather large amount of wasted space on the right-hand side. Yes, the cursor keys are handy, but I would prefer a fully fledged numeric keypad.

Rather than a fully customisable keyboard backlight, HP offers a four-zone affair that lets you assign different colours to the left, right, centre and WASD parts of the keyboard. It’s a setup I rather like the look of and it’s very easy to customize.

You only need to undo eight screws to detach the bottom cover and this gives you easy access to the two RAM modules as well as two M.2 2280 SSD slots and the two fans should you feel the urge to do a bit of spring cleaning.

HP Omen 15-en0006na review: How good are the display and speakers?

The 1,920 x 1,080 144Hz matte-finish IPS display returned a reasonably solid set of numbers when we pointed our colorimeter at it. Maximum brightness registered at 318cd/m², although sRGB coverage was less impressive at 88.4% while a contrast ratio of 901:1 and a Delta E colour accuracy of 1.06 rounded out the results. It’s good if not great.

HP describes the Omen 15’s speaker system as delivering “an exceptionally rich audio experience”, which might be pushing things a bit but the Bang & Olufsen branded system does indeed generate a satisfyingly loud and detailed soundscape.

Keep in mind, though, that the speakers fire downward. That fancy grille you can see above the keyboard is for ventilation and decoration, so the sound improves when it can bounce off a flat, solid surface. With an octa-core Ryzen 7 processor with a maximum clock speed of 4.2GHz, you’d expect the Omen 15 to be quick and you won’t be disappointed. The Geekbench 5 multi-core score of 6834 is the best I’ve seen from a budget gaming machine and the result from our in-house 4K media benchmark was equally impressive. This is a very, very speedy machine. Turning to its gaming performance, to break the magical 60fps barrier in Hitman 2 we had to knock the supersampling back from 2 to 1 but having done that the result jumped from 55fps to 64fps. Neither result is to be sniffed at. Running the Wolfenstein: Youngblood benchmark we noticed a massive difference between ray tracing off (104f/s) and on (39f/s). That’s because, while the GTX 1660Ti can run real-time ray tracing it wasn’t originally designed to do so. Don’t think you’re getting an RTX GPU on the cheap; you’re not. Playing Doom, however, the frame counter never dropped below 125fps. That puts the gaming performance of the HP very close to the Asus TUF Dash F15, a more expensive machine with a more powerful GPU.

One thing that counts against the Omen is that it gets rather warmer than the competition when pushed hard, and the fans are the loudest here at full speed. Fan activity can be adjusted via the Omen Command Centre but be prepared for some serious wind roar when you are pushing things. I expected better from the Omen when it came to battery life because it has a manly 70.9Wh / 5833mAh battery. The video rundown result of 8hrs 50mins wasn’t exactly bad, but other gaming machines have done better recently; namely the Asus Dash F15, which lasted three hours more from an only slightly larger-capacity battery. Of course, this is the downside of running a powerful 45W octa-core CPU. The Omen does bounce back, however, with an impressively nippy performance from its Samsung PCIe NVMe SSD. It proved a very strong performer with read and write speeds of 2,700MB/sec and 2,442MB/sec in our testing. But those strengths are balanced by slightly disappointing battery life and fan noise that can wake the dead at full speed. The price is reasonable at £1,099, but it’s not quite low enough to edge in front of our favourite budget gaming laptops. 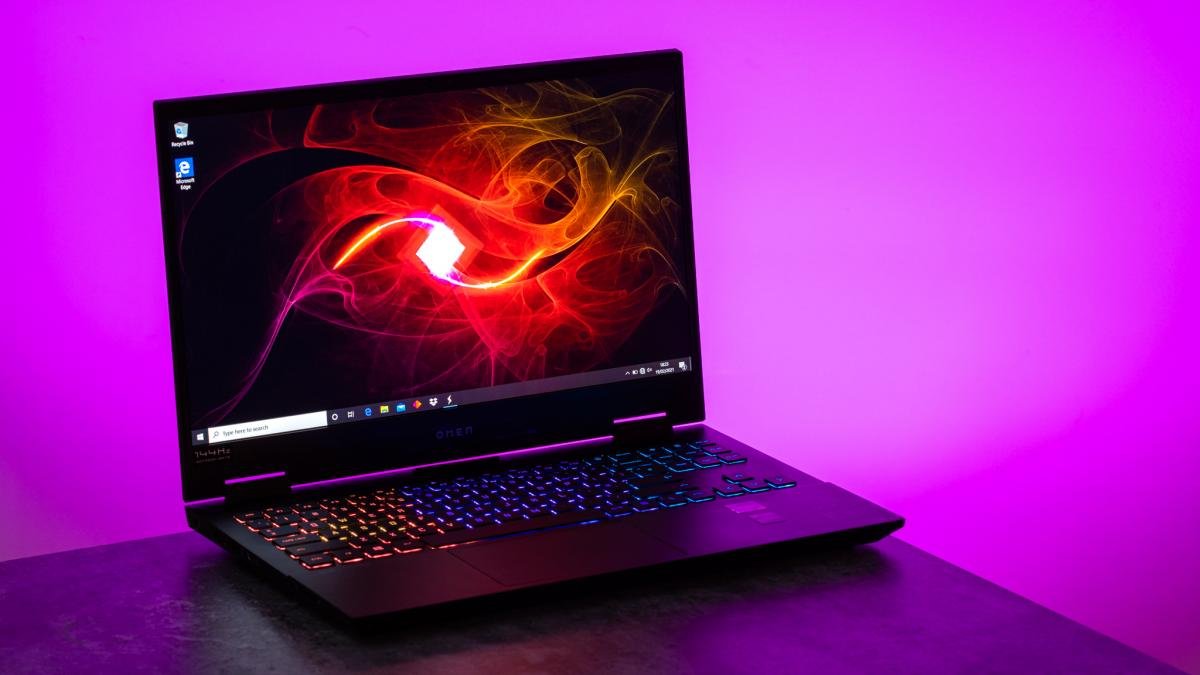