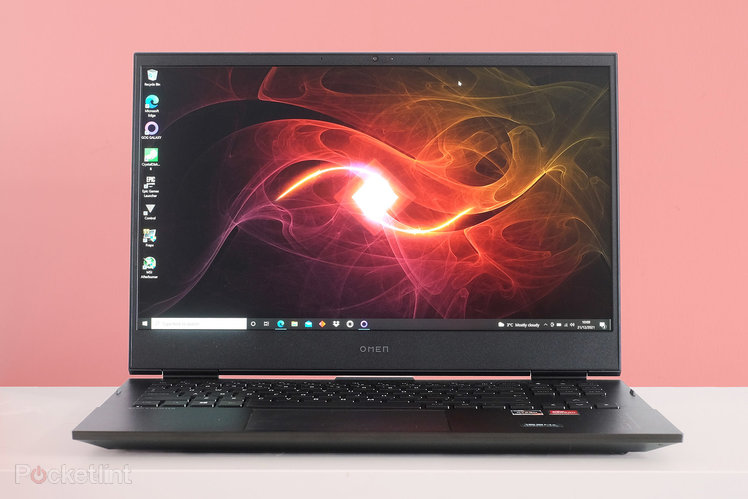 The HP Omen 16 is part of a laptop trend even miserable old so-and-sos like us can get on board with. It’s a powerful gaming PC – but doesn’t look too much like one.

This is part of why Razer‘s laptops caught our attention years ago. The concept of ‘style’ didn’t start and end with making the laptop equivalent of a Lamborghini.

As such the HP Omen 16 has become a gaming equivalent of the great HP Envy 13. It’s a performance laptop that’s reasonably priced, looks pretty good and has wide appeal.

Just two design elements mark the HP Omen 16 as a gaming laptop. And the first is something you can ‘fix’, if you like: its RGB-lit keyboard and the colourful diamond on the lid. Even this looks more like jewellery than a classic gamer motif though.

Older Omens were some of the more striking gaming laptops, with a strange tapered part below the screen. But nowadays HP seems to have made a concerted effort to make the whole range look pretty, well, ‘normal’. 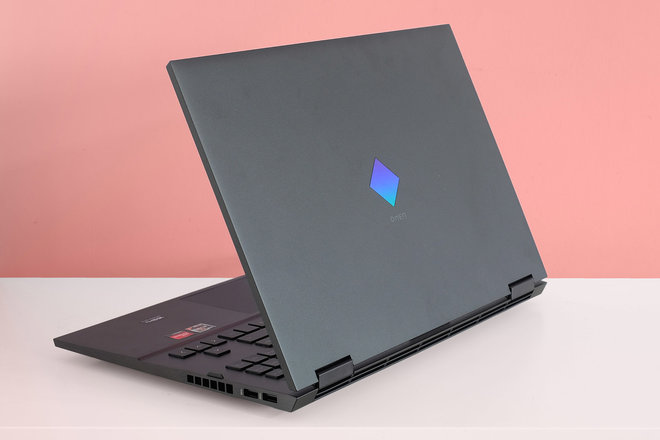 We welcome this because there are still plenty of more overtly gamer-ish laptops out there from Acer and Asus if you want the more eye-catching stuff.

HP’s quality is solid too. The Omen 16 keyboard plate feels stiff, likely helped by the use of an aluminium keyboard surround. Its lid and underside seem to be plastic, but there’s a pleasant consistency to the design that means you’ll probably forget this within a day or two anyway.

It’s a little heavy to be used as a day-to-day portable laptop at 2.25kg, but it’s no monster.

These last two factors are great for gaming. You get the step-up in sharpness from 1080p, while at 165Hz the reproduction of fast motion on this display is reassuringly blur-free. 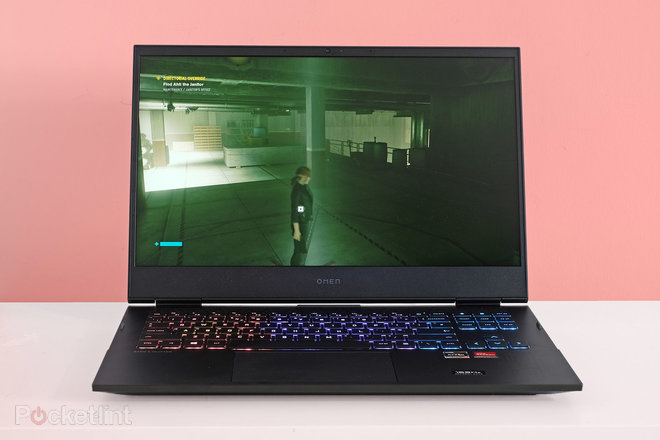 This isn’t an ultra-wide colour screen and brightness is nothing too special at 300 nits. But each is easily good enough for an at-home gaming PC. Contrast is very good for an LCD too.

There is one little issue with our HP Omen 16, though. It has a clear patch of backlight bleed, looking as though the panel has been pinched in one corner, causing slight damage to the structure.

Therefore this is not a star display in every area, but we love the 1440p resolution, the size, and the general image quality.

The HP Omen 16 has a pretty standard chiclet keyboard with membrane keys. Key action is good among laptops in general, but some of the top-end gaming designs have deeper action keys.
Their feel is light and fast, though, which is not a bad style for a gaming laptop. 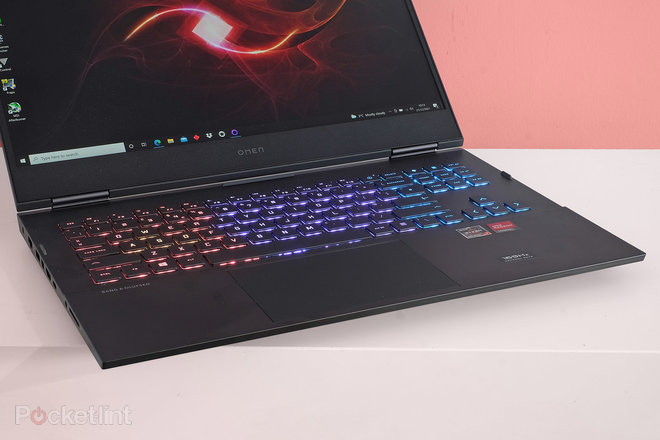 There is an RGB backlight too, but not the most desirable per-key kind. Instead, there are four zones you can set independently, including a smaller one for the WSAD buttons. The intensity of the colour and the maximum brightness is not as good as a per-key system.

This is no big surprise when the HP Omen 16 is a somewhat value-led laptop. Its arch-rival, the Lenovo Legion 5, doesn’t have an RGB backlight at all, just a single-colour one.

There are some similar compromises in the touchpad. At first glance it looks great – it’s of a good size for a gaming laptop and looks the part. However, it has a plastic surface rather than a textured glass one. 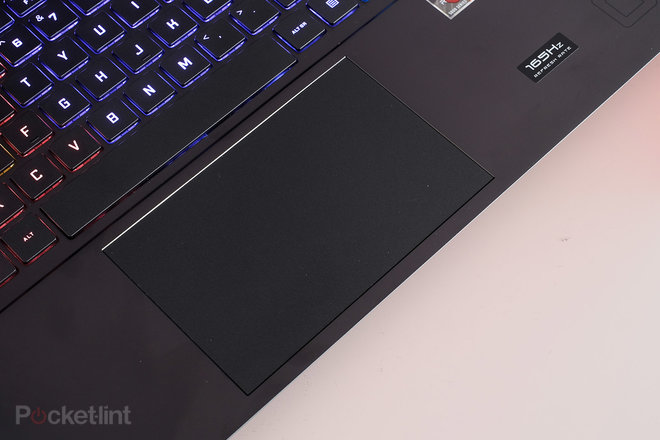 As such the clicker doesn’t have the refined feel of a lifestyle laptop like the Microsoft Surface Laptop 4 either. However, let’s get real: HP shouldn’t be spending much of the Omen 16 budget on a fancy touchpad, and it hasn’t. This pad is perfectly decent, and there’s no annoying dead zone to the clicker. It just gets a bit stiffer right towards the top.

The HP Omen 16 is a solid fit for 1080p gaming with new titles. However, our review Omen 16 has an AMD Radeon RX 6600M GPU, which isn’t quite as well equipped as the rival Nvidia RTX 3060. That can handle ray-tracing better and supports Nvidia’s fab DLSS upscaling feature.

Nonetheless, perfrormance is solid. Remedy Entertainment’s Control offers a good view of what you can expect from the laptop. Play it at 1080p resolution, high settings, and you’ll see frame rates that head between the high 50s and 60fps. Want to use the native 1440p? You’ll have to put up with mid-30s, or low-mid 40s fps if you drop the graphics down to medium settings. 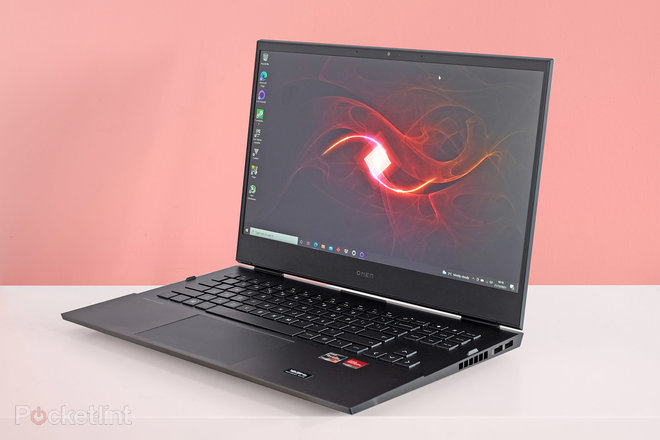 So what’s the point of the 1440p screen? There are loads of games that will run perfectly at the display’s native resolution – and at 60fps.

However, at the moment we do slightly favour the rival RTX 3060 when working with this sort of budget. It is much better equipped for ray-tracing – you can’t even switch it on in Control at the time of review – although at this level of GPU you’ll often be better off without ray-tracing.

The AMD RX 6600M also lacks DLSS (an Nvidia technology), which lets you render games at a lower resolution and upscale them to your display’s native res, with excellent results. AMD has its own version, Fidelity FX Super Resolution, but it is not quite as powerful.

Still, if you want Nvidia tricks, you can have them. There’s an Intel/Nvidia version of the Omen 16 that costs more, and uses the Intel Core i7-11800H CPU, with an RTX 3060 GPU. However, by this point you’re going head-to-head with the Lenovo Legion 5 Pro, which we like slightly more.

We are fairly impressed by the HP Omen 16’s management of heat too. This is not a super-thick laptop, and the choice to use an aluminium keyboard plate does result in notable heating of the little grille above the keyboard after a while. 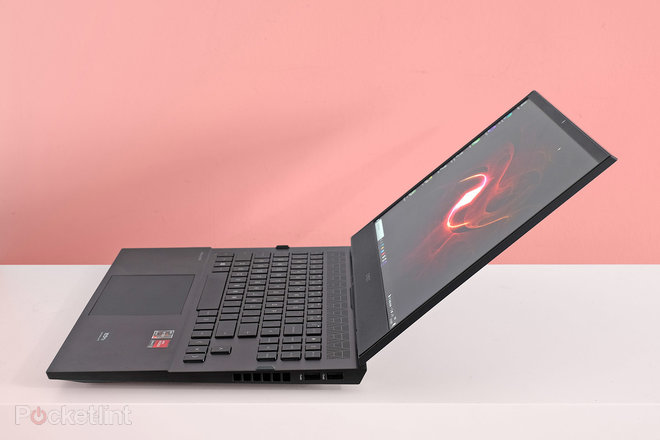 However, we’re not talking about anything like the hot temperatures you might see in an ultra-thin gaming laptop like the Asus ROG Zephyrus G14. Its reasonably large diameter fans move heat away from the internals before it becomes too glaring, and they do so without any distracting high-pitch sound. We did hear the Omen 16 shift up a gear after about 15 minutes of play, but given it started from a very low noise base, we’re not complaining.

A gaming laptop does not necessarily need amazing battery life. But one like this – that can easily double as a productivity all-rounder – could really do with it. The Omen 16 starts off from a good place, because it has an AMD Ryzen processor, which typically lets a laptop last longer off a charge than the Intel equivalents. 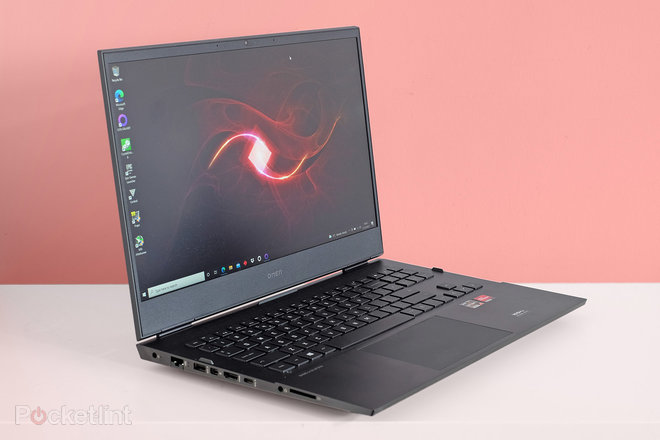 If you simply do light work on the HP Omen 16, we found it lasts four hours and 20 minutes. Not great. However, by our estimation it should do better than that. We then engaged the battery saver mode, started streaming video, and it then lasted five hours and 50 minutes. Much better.

You should see similar longevity if you keep the screen brightness modest, don’t do anything taxing, and stick to the battery saver mode. It’s slightly better than the Lenovo Legion 5 Pro managed, by around 50 minutes.

And the rest? The HP Omen 16 has OK speakers. Their tone is fine and maximum volume is acceptable, but as with almost all gaming laptops there’s no actual bass going on here, just a sample size pack of mid-range. 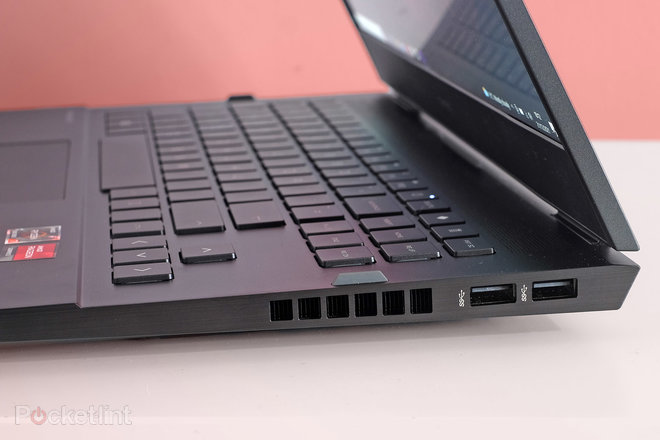 Connections are fairly comprehensive, though. You get three classic USB-A 3.0 ports, one USB-C, an Ethernet connector, DisplayPort, and an SD slot.

The HP Omen 16’s HDMI is specced to the 2.1 standard, but the USB-C does not have Thunderbolt. It’s a slower 10Gbps connection. The step-up Intel/Nvidia does have a Thunderbolt 4, which is no surprise as the connector standard was designed by Intel in collaboration with Apple.