If you’re looking for a gaming laptop on the cheap, the HP Victus 15 is something that’s certainly worth taking a look at. It’s an entry-level gaming PC, meaning that you’re not going to see any RGB lighting, 360Hz displays, or high-end RTX graphics. What you will get is a lot of bang for your buck.

It does still have a 16:9 display, and it’s reminiscent of older gaming laptops that sacrifice color gamut in favor of a higher refresh rate. But performance was a lot better than I expected, considering that HP sent me the base model with a Core i5, a GTX 1650, and 8GB RAM, which costs under $800.

I actually had a great time with it, and since games automatically adjust their graphics based on your hardware, I found that gameplay was actually smoother than on some high-end gaming laptops. For a casual gamer that’s looking for value, the Victus 15 is a good pick. 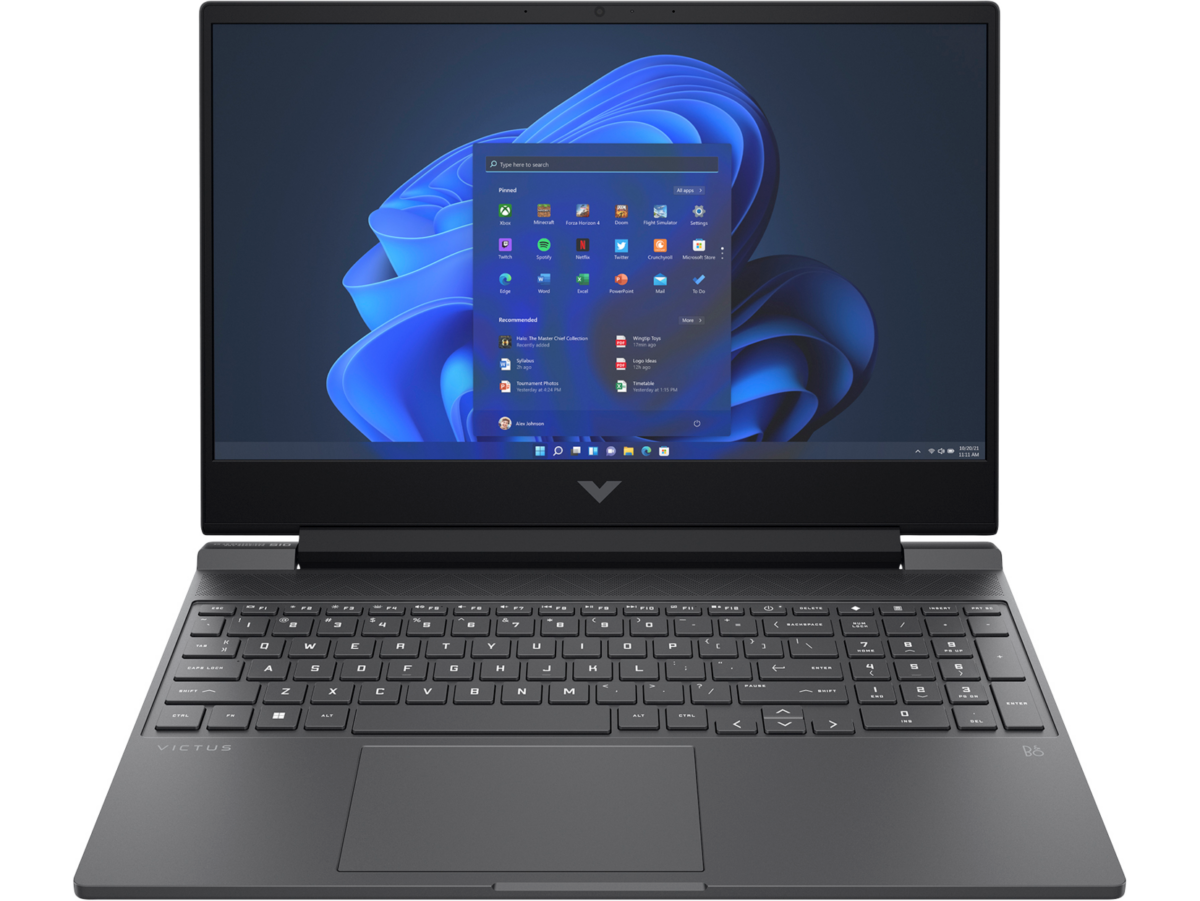 The HP Victus 15 is a casual gaming laptop with a proper gaming design, Intel 12th-gen processors, and more.

Announced earlier this year, the HP Victus 15 is available now. You can get it in your choice of AMD Ryzen 5000 or Intel 12th-gen, although as usual, Intel’s processors come at a bit of a premium. The AMD Ryzen model starts at $549.99, while the Intel model will start at $799.99.

It comes in three colors: Mica Silver, Ceramic White, and Performance Blue. For the most part, you’ll find the full array of colors at HP.com.

Design: It’s designed for gaming without the bells and whistles

The HP Victus 15 looks and feels like a gaming laptop, something that actually surprises me a bit. Given the entry-level nature of it, it can be assumed that customers who buy one will also be using it for something else, like school. They might also be doing some photo or video editing on it.

But like I said, you only need to take one look at the HP Victus 15 to know that it was made for gamers. It has the vents all across the back, and there are angled edges that elevate the bottom for better air flow. And of course, it’s got the Victus logo stamped in the lid, as opposed to an HP logo or an HP OMEN logo. 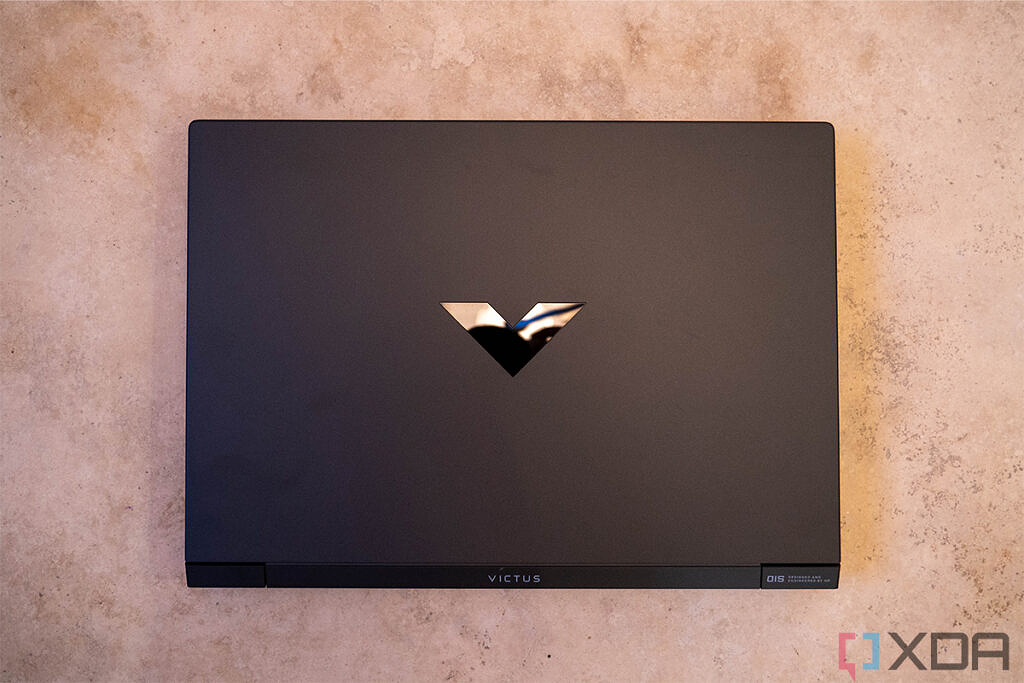 The color of the unit that HP sent me is called Mica Silver, which is similar to the Dark Ash Silver that the company used to use on its Spectre laptops. In other words, it’s not silver at all. It’s really just black, or maybe even a dark gray. It also comes in Ceramic White and Performance Blue, which is pretty neat for a laptop like this. It makes it more personal.

Now, let’s talk about ports, because the selection is interesting. First of all, I just want to say that I’m disappointed that none of them are on the rear of the laptop. By nature, a gaming laptop has things plugged into it while you’re using it; at the least, you’ll be connected to power. And when you have cables sticking out the sides of your laptop, they get in the way. This is even worse on a gaming laptop, because there’s only one power port. 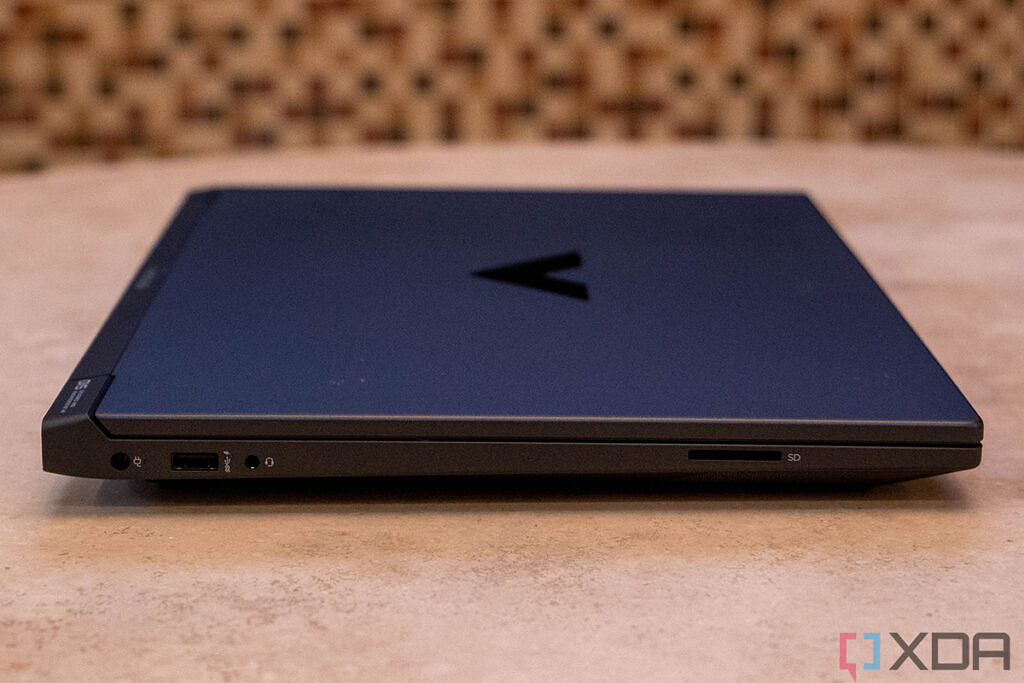 Other than that, I like the port selection. On the left side, you’ll find the power port, a 3.5mm audio jack, a USB Type-A port, and a full-size SD card slot. That SD card slot is actually a pretty solid value indicator if you might also be using this laptop to edit photos and videos. Suddenly, it doesn’t feel like it’s just an entry-level gaming laptop. 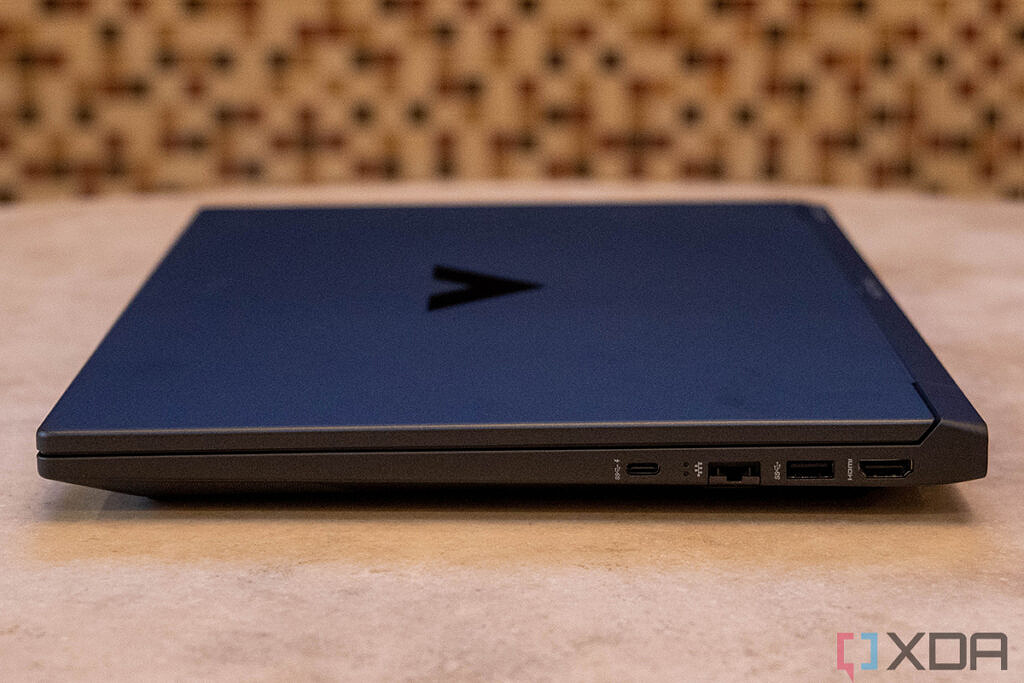 On the right side, you’ll find HDMI, USB Type-A, USB Type-C, and Ethernet ports. Wired internet is another thing I wouldn’t expect to see from an entry-level laptop like this. Obviously, steadier connectivity means better gaming performance, faster downloads, and so on.

Unfortunately, all of the USB ports are USB 3.2 Gen 1, meaning that they offer 5Gbps data transfer speeds.

Display and keyboard: The screen is FHD at 144Hz, but that’s the whole story 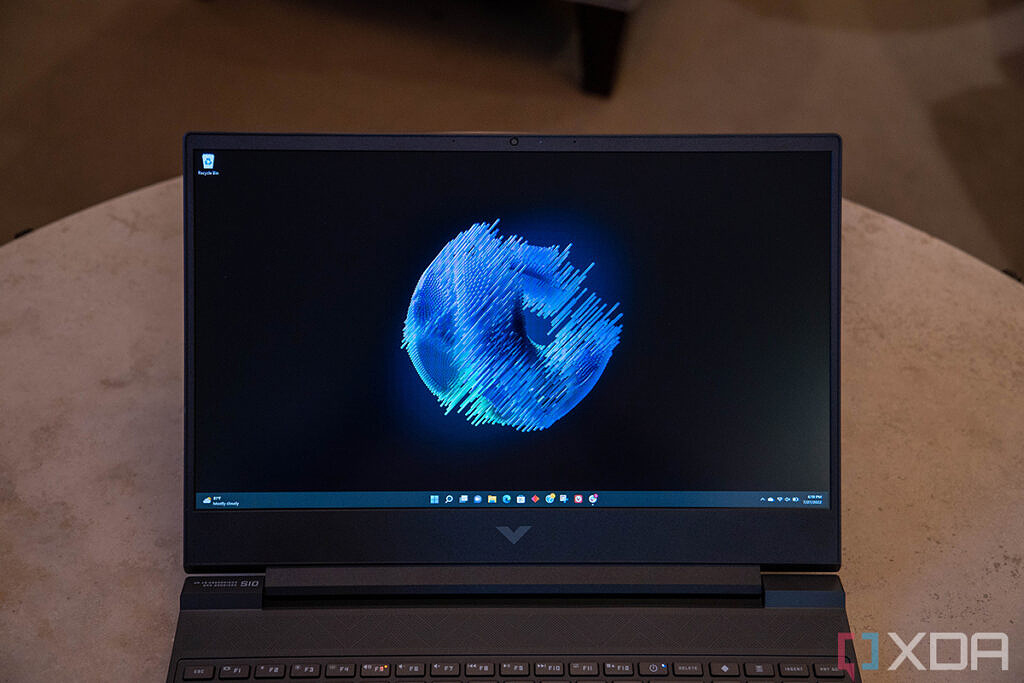 According to me testing, it supports 65% sRGB, 46% NTSC, 48% Adobe RGB, and 48% P3. These numbers aren’t particularly good. Historically, a lot of gaming laptops have sacrificed things like a wide color gamut in favor of refresh rate. In fact, the idea has been to sacrifice anything necessary for gaming performance. The gaming laptop market has gotten a lot better, but this laptop is still entry-level.

Brightness maxxed out at 261.4 nits, exceeding the 250 nits that were promised, and contrast was a healthy 1,190:1. For an entry-level gaming laptop, the display is pretty good overall. It’s just not ideal for things that require color accuracy like photo and video editing, a shame considering that it has an SD card slot. 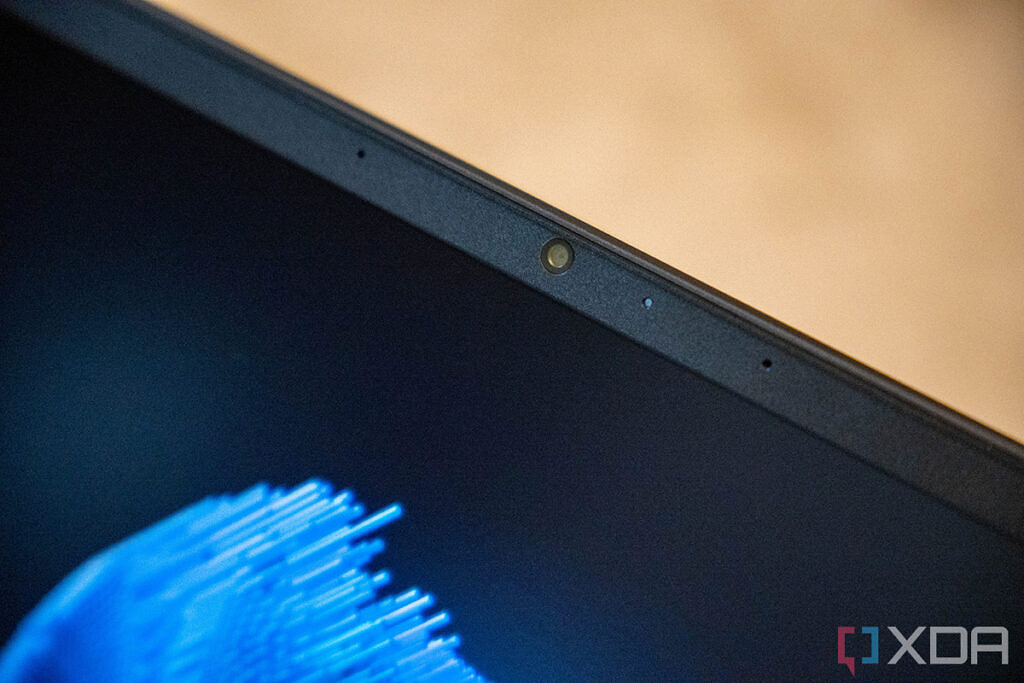 Sadly, the webcam is 720p. I know that 1080p webcams tend to be reserved for more premium devices, but I really don’t qualify that as an excuse. In this day and age of working from home, webcams are important. You can get a smartphone for half of the price of the Victus 15 base model that has a much better front camera than this webcam. The difference is that while selfies have been popular in mobile since day one, webcams on PCs really weren’t important at all until 2020. 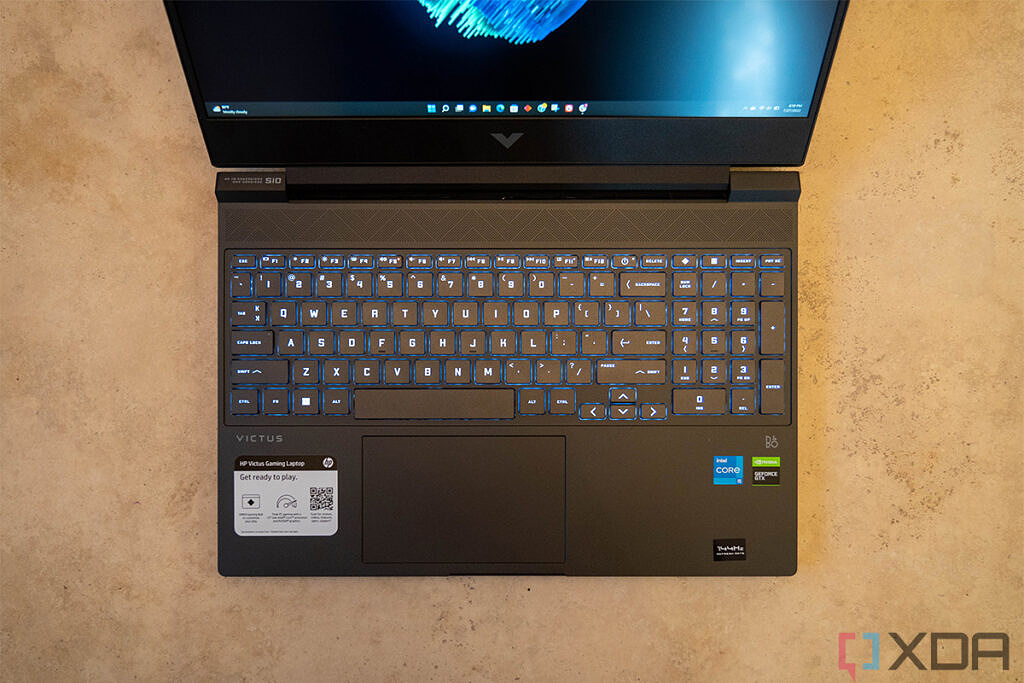 The keyboard has standard Chiclet-style keys, and a white backlight. You won’t find any RGB lighting here, which is fine. HP went with its usual design of including all buttons as part of the keyboard, and that includes the power button. There’s also a dedicated button to launch OMEN Gaming Hub, which you can use to access your library of games, or to customize lighting if you have any HP RGB accessories.

Performance: It has Intel’s 12th-gen processors and mainstream Nvidia graphics

It actually worked. I loaded up Forza Horizon 5 and played with the beautiful new Hot Wheels expansion pack. The default graphics setting was medium, and it played just fine. I also recently decided to once again play through all of the Halo campaigns as a means of testing a mix of native gaming and cloud gaming, so I played through a big chunk of Halo: Combat Evolved as part of Halo: The Master Chief Collection on the Victus 15. That ran great as well. 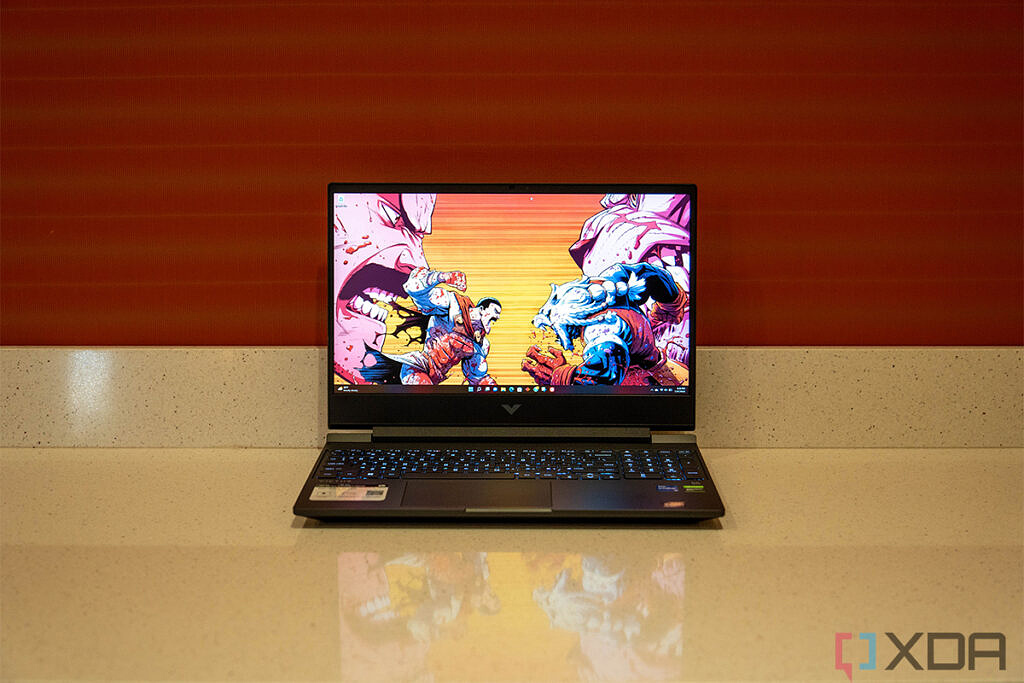 Obviously, most games will do their best to adjust their graphics to match your hardware. Some games have higher minimum requirements than what’s available here, and that’s to be expected too. If you want better performance, there’s still the RTX 3050 Ti model.

For benchmarks, I ran PCMark 10, 3DMark, Geekbench, Cinebench, CrossMark, and VRMark. The units I compared it to actually weren’t gaming laptops at all, but you can see by the scores that some are better at certain things.

For example, while the Pavilion Plus is a better laptop for photo editing with its OLED display, and the CPU scores are better than the rest, it doesn’t have the same graphics power, so there’s a big difference in the 3DMark result. The Acer Swift X gets better overall scores, but as tends to be the case with AMD Ryzen processors, single-core CPU scores can’t beat the competition.

Overall, performance on the HP Victus 15 was great, and exceeded my expectations. I thought the Core i5 and 8GB RAM would be real bottlenecks.

Should you buy the HP Victus 15?

The HP Victus 15 offers a lot of value for your money, but it’s not for everyone.

Who should buy the HP Victus 15:

Who should not buy the HP Victus 15:

The HP Victus 15 is an excellent entry-level gaming laptop, with a lot of value and a lot of power. However, you might need more power, or a better display, and there are higher end options for that. That’s why HP has its OMEN brand, for competitive, enthusiast gamers.