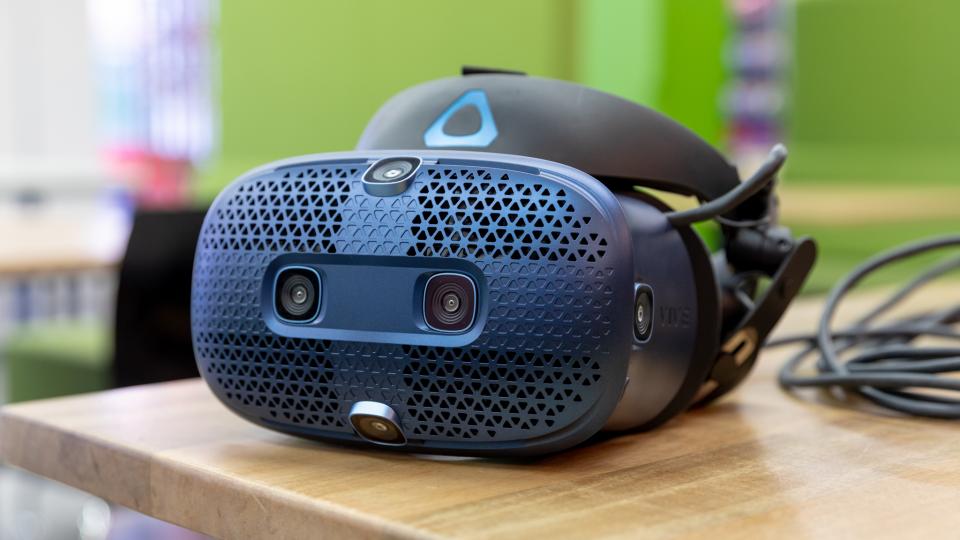 HTC’s latest headset is a baffling mixture of good, bad and ugly but the overall impression is a positive one

The HTC Vive Cosmos marks a turning point for HTC’s VR division. Like the excellent Oculus Rift S, the Vive Cosmos requires no pesky base stations for tracking, and has a neat trick up its sleeve: a modular design that allows users to alter the number of built-in cameras on the headset’s frontal plate.

The model I’m reviewing here is what you’d call the standard Cosmos (there are two others, which I’ll discuss below). I’ll admit, I’ve had a tough time reaching a verdict. The most obvious thing to do is compare this headset with the Oculus Rift S, but that throws up issues, because arguably these products should be in a different category to one another.

The Cosmos has the edge in terms of pure specifications. The display is of a higher resolution, for a start. Then there’s the goggles themselves, which are more comfortable, and the built-in speakers, which are far more powerful. The Rift S is some £300 cheaper, and yet it comes with better manufacturer software, supports more Steam games and has those unbeatable Oculus lenses complete with the most lenient sweet spot on a VR headset today.

In short, it’s a bloody, drawn-out slog of a battle between these two headsets. Each one has its strengths; each one its weaknesses.

HTC Vive Cosmos review: What you need to know

As I’ve already mentioned, the HTC Vive Cosmos is a PC-powered VR headset that minimises the clutter by requiring no external base stations to track either you or your controllers. It instead relies upon six built-in tracking cameras, of which four are integrated into a removable faceplate – that’s the funny mesh on the front of the visor. This faceplate can be replaced, which is a first for a VR headset. 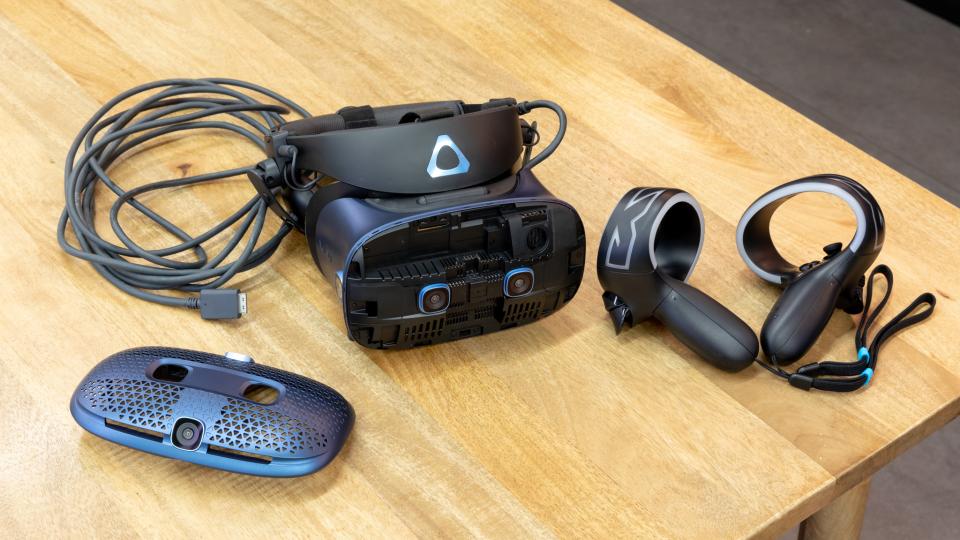 There are three Vive Cosmos configurations to choose from. The Vive Cosmos Play is the simplest (and cheapest) model, with just four tracking cameras – this one isn’t available to buy yet. The standard Vive Cosmos has six tracking cameras, and the £900 Cosmos Elite has four: the Elite also ships with external tracking base stations and HTC’s more advanced controllers, however, for the utmost precision. All three fundamentally build on the same headset, and the faceplates are all available to purchase separately, meaning you can mix and match to your heart’s content.

I’m reviewing the standard Vive Cosmos here, with six tracking cameras. It has a 2,880 x 1,700 LCD display (1,440 x 1,700 per eye) with a refresh rate of 90Hz and a field of view of 110°. It comes with two Cosmos controllers, which require two AA batteries each to function. According to HTC, the Cosmos weighs 645g, which is a tad on the portly side.

In the box, you’ll find the headset itself, plus two controllers, a multiport “Link box”, a USB-C to DisplayPort cable, a DisplayPort adapter with proprietary connector, a USB-A to USB-A cable and a power cable, plus assorted paraphernalia.

Let’s pretend it’s October 2019, when the Vive Cosmos model on trial here first launched for a not-insignificant £700. The VR landscape remains pretty much unchanged. The Cosmos’ primary competition is still the Oculus Rift S, which will set you back a more reasonable £400; then there’s the fully wireless Oculus Quest, which also starts at £400 (64GB storage), rising to £500 for the model with 128GB of internal storage. 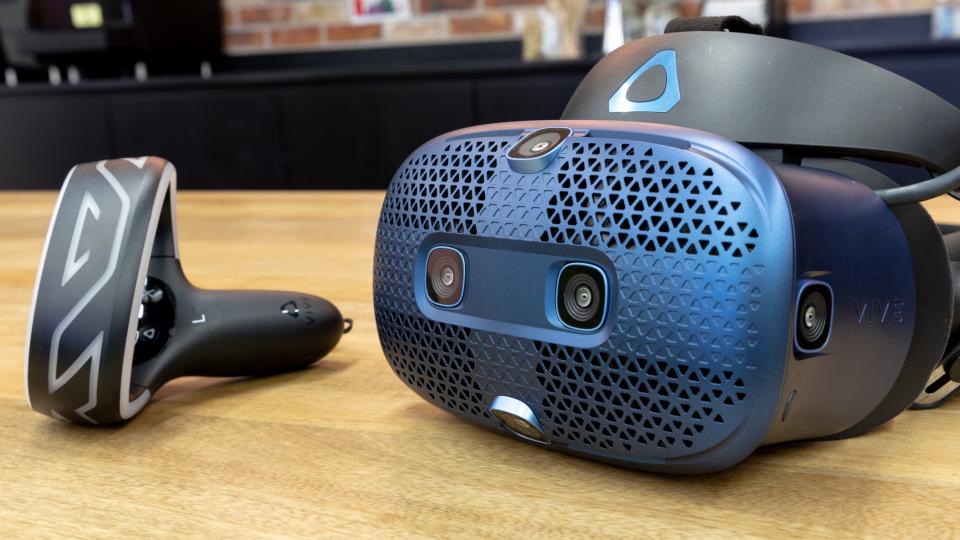 Those aiming for a premium VR experience might consider the HTC Vive Cosmos Elite, which at £900 is competing with the beefy Valve Index (£919). Of course, you could also spend that sort of money on the HTC Vive Pro but you’d be a fool for doing so. For £1,300, the Vive Pro actually has a lower resolution than the Cosmos and lacks the built-in tracking capabilities.

At the high-end of the market, then, it’s neck-and-neck between Valve and HTC, with the Cosmos Elite and Index offering similar specifications at similar prices. At lower prices, however, Oculus is running away with it. As it stands, the Oculus Rift S is the obvious choice for those looking to get into PC-based VR without breaking the bank. Given the price difference, I shouldn’t be comparing the Rift S and the Cosmos at all but they are far too evenly matched elsewhere to avoid it.

Our favourite alternatives and where to buy them:

Where the Oculus Rift S is understated, the HTC Vive Cosmos is ear-piercingly loud. Place the two side-by-side and you’ll begin to understand where your money is going; there’s a heft to the Cosmos that extends beyond its pleasingly premium build quality. I noted that the Rift S didn’t feel overly cheap in my original review but, compared with the Cosmos, it might as well be made of cardboard.

The headband is thick and the visor weighty. That absurd mesh front plate might be an acquired taste but it connects to the headset with a reassuring click and marks the Cosmos as the one-of-a-kind product it is. There’s an IPD (interpupillary distance) dial on one side, and a power button on the other. Two clip-on headphones straddle the “halo” headband, which is adjusted via a dial on the rear. Put simply, it’s brimming with useful features. 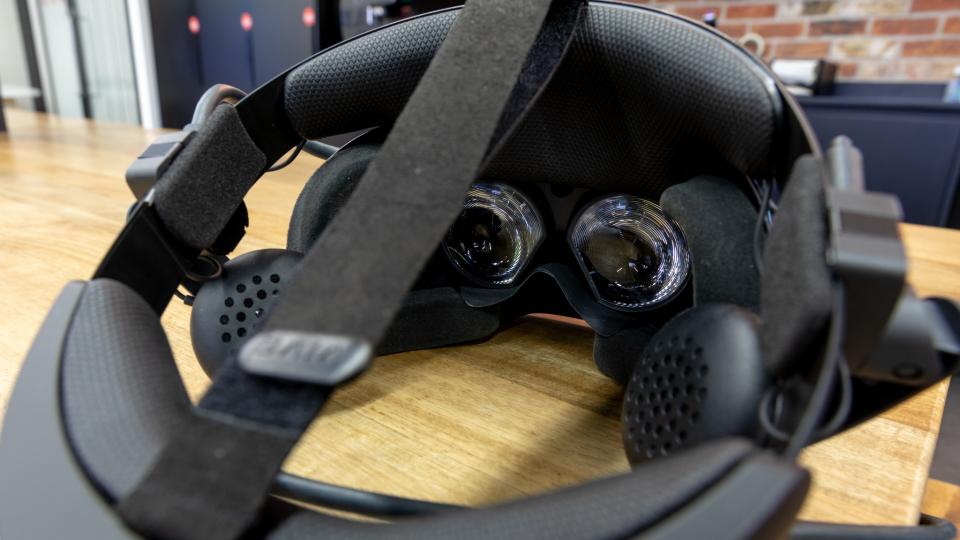 I now come to a contentious point. The Cosmos has a visor that you can lift up without removing the headset, which is an excellent idea for taking breaks or checking your surroundings mid-game. This is achieved by the Halo headband, which spreads the weight of the visor across the whole of your head.

In practice, however, it’s challenging to find a good fit. Adjust the headset so the visor is comfortable to lift and you’ll most likely have sacrificed a good screen viewing angle and vice versa. Worse still, the best fit in terms of a comfortable lift often leaves a gap between visor and nose, allowing in an annoying amount of light.

I had the same issue with the Lenovo Explorer, a Windows Mixed Reality headset with a tilting visor like this one. It might just be my weirdly shaped head but, in any event, it’s unnecessary faff. Thanks to the Cosmos’ excellent passthrough feature, you can see the outside world anyway, through the headset’s built-in cameras at the double-press of a button. I wonder why it needs the lifting visor at all. 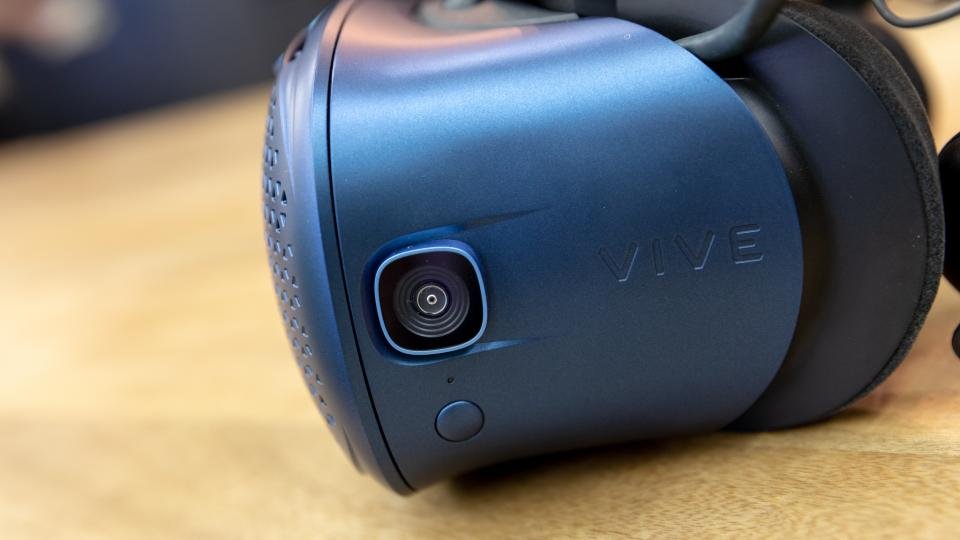 I have nothing but praise for the Cosmos from here on out. The built-in speakers blow those on the Rift S out of the water and the headset itself is comfortable to wear for extended periods of time. Furthermore, the joy of being able to physically adjust the interpupillary distance (IPD) for the clearest view is indescribable.

Put the Cosmos on and you’ll be peering into a 2,880 x 1,700 LCD with a refresh rate of 90Hz. That’s a seriously impressive display and it shows: the Cosmos has the best handle on the “screen-door” effect of any headset I’ve tried. This means it’s relatively difficult to spot the lines between pixels, which is a problem that plagues most headsets. By VR standards, image quality is crystal clear.

My concern is not with the display but rather with the lenses through which you view it. The sweet spot on the Vive Cosmos is on the slim side; if you’re not staring directly into the centre of the display, you’ll immediately notice a strong blurring effect that increases in intensity as you move your eyes toward the outer rim of the lens. This isn’t so much of a problem with the Rift S.

HTC’s virtual home screen is called VivePort, although it’s SteamVR that launches when you first turn the headset on. HTC is clearly keen to push its own software without letting us forget about the Steam compatibility: you’re therefore required to navigate between the two quite frequently, although this is not as tough as some have made it out to be. VivePort has an excellent quick menu you can bring up at any point, should you wish to switch games or return to the main hub.

VivePort is sluggish, however, and lags behind its rivals for social features and customisability. It does the job, however, and based on my experience you’ll spend more time in SteamVR anyway. 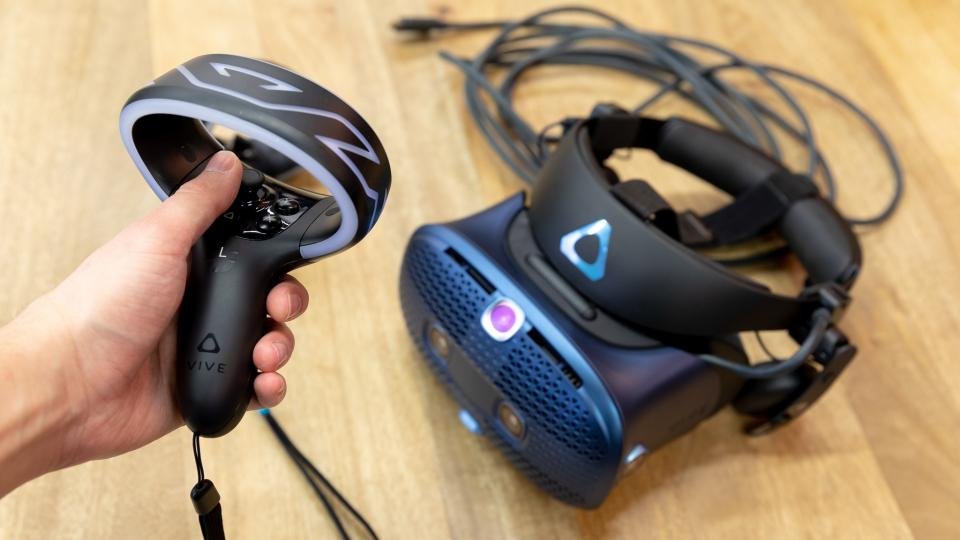 The choice of games is fairly similar to what you’d find on the Oculus store, although you’ll notice the absence of titles like Superhot and Vader Immortal. But that’s okay: the Vive Cosmos is mostly compatible with Steam, so it’s not like it’s crying out for content.

I say “mostly” because some games are yet to support the Cosmos wireless controllers. At the time of writing, Bethesda games like Skyrim VR and Fallout 4 VR needed a community-made compatibility mod to be installed. Based on the various forum posts I’ve read, this is a roadblock that many buyers were not expecting, so you have been warned.

The unforgiving sweet spot and fit issues do put a dampener on the whole experience but I still enjoyed using the Cosmos. It’s the sort of headset you can wear for quite some time without hurting your forehead or cheeks. Furthermore, the combination of that gorgeous display and substantial audio lend a level of immersiveness to games that the Rift S can’t match, at least not without a pair of your own headphones plugged in.

As for tracking accuracy, your experience may vary, but I found that the Cosmos had a small blind spot directly in the centre of the visor at very close range – a bit of an issue when you’re aiming down a scope in a shooter, for example. That’s not to say that the Cosmos can’t track its controllers with pinpoint precision, because it can; it just seems to struggle in this one particular area of the playspace.

I’ve read that this is a common problem with the type of tracking the Cosmos employs and yet the Rift S experiences no such issues. Here’s a video to better explain what I’m on about:

In most scenarios, this wasn’t an issue; it’s just a bit baffling that the £400 Rift S somehow skirts the problem altogether.

At the beginning of this review, I expressed how difficult it had been to reach a decisive verdict on the HTC Vive Cosmos. It’s such an extraordinary blend of highs and lows that I’m not sure I can recommend it. Like the Rift S, it’s full of little niggles that should have been kept well clear of the finished product; then again, it’s also a stellar example of how much VR has progressed, perhaps even more so than the Oculus headset.

The price is perhaps the only unpalatable thing about the Cosmos. It might have the cheaper Rift S beaten on pure specifications but the two do share plenty of common ground. The fact that the £400 Rift S can square up to a £700 Cosmos and come away mostly unscathed is a good example of how working smarter is often better than working harder.

I’m awarding the Cosmos four stars because, in many ways, it’s a desirable product. The display is one of the best in the industry and the product is of a higher build quality than any I’ve tested before. It is, moreover, a fine replacement for the HTC Vive and HTC Vive Pro. I still recommend you buy the Oculus Rift S if you’re new to VR on PC but if you’re looking for a future-proof, high-end headset that still cuts the clutter, the HTC Vive Cosmos might just be for you. 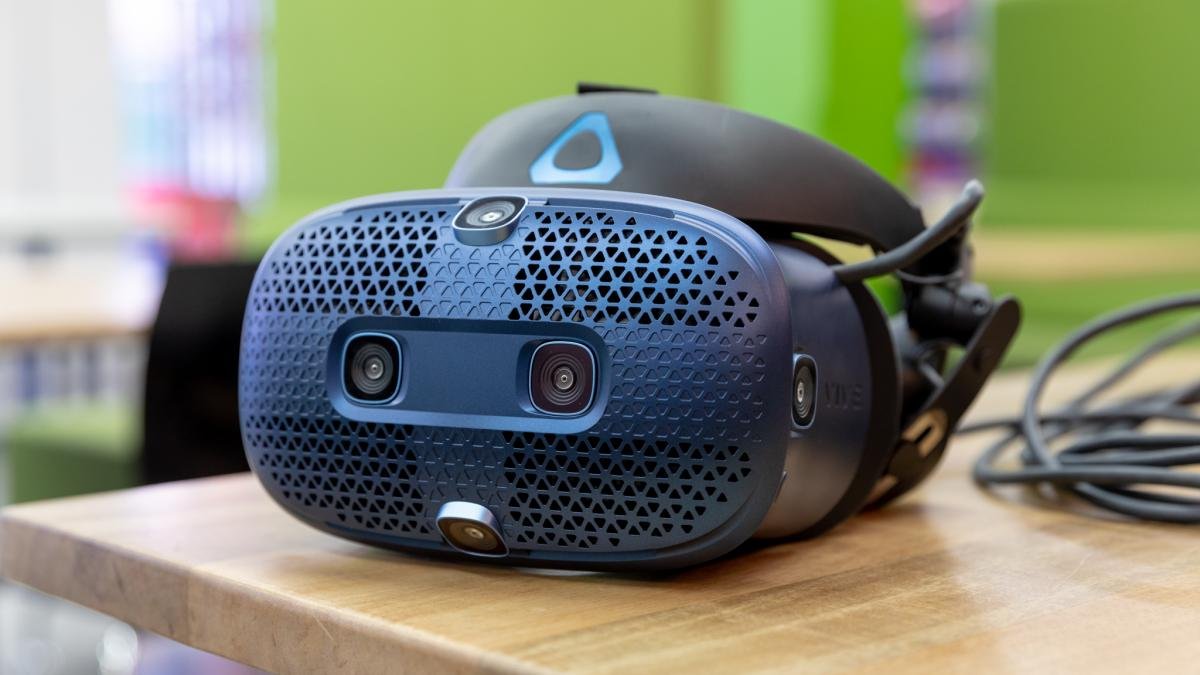