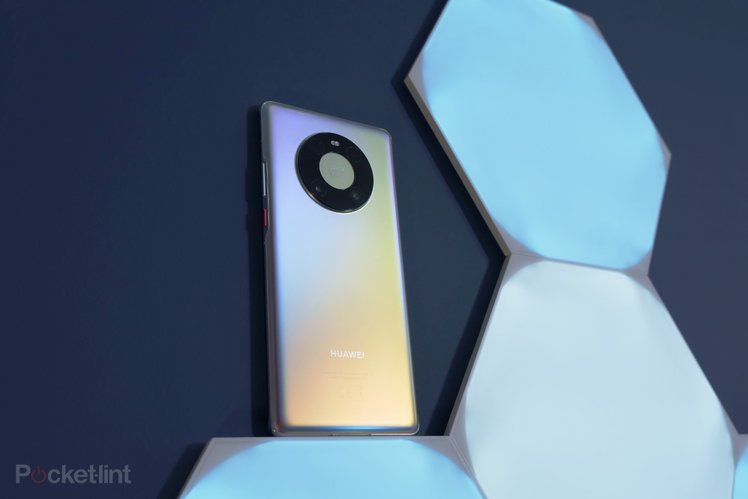 Autumn is the time of year Huawei releases its Mate series of flagship phones and 2020 is no different in that regard. The latest Mate is here, the Mate 40 Pro, and we’ve had our hands on it for a few days.

It’s a flagship in every sense, whether you look at internal specs, display tech, the camera makeup or any other feature. It’s a compelling looking phone, but as with any other recent Huawei phone, its still missing Google Play and – as such – relies on Huawei’s App Gallery to bring apps to users.

The first thing you’ll notice when picking up the Mate 40 Pro, at least when looking at it from the back, is the unique design of the camera housing. It refines the circular design of the Mate 30 Pro, placing the cameras inside a protruding ring, called the ‘Space Ring’ by Huawei, presumably because it looks a bit like a flying saucer. 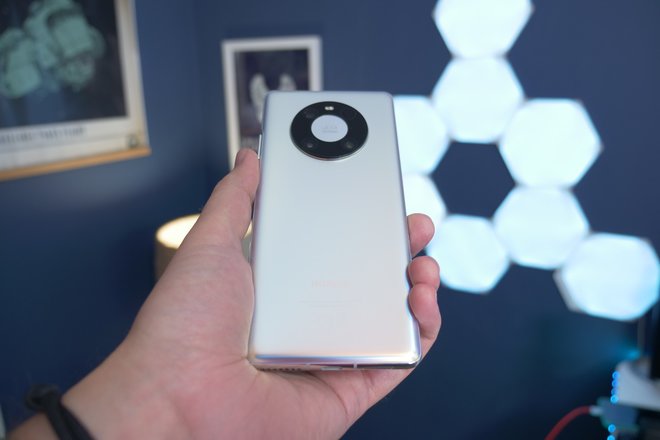 After that you’ll probably be hypnotised by the Mystic Silver finish for a while, it uses a combination of frosted glass and layers of colour under the glass to create a truly mystical finish. Away from light, it looks silver, but you get these reflections around the edges hinting that it might be more than that. Turn it and angle it to light at different angles and it could end up looking like virtually any and all colours of the rainbow.

Sometimes it has an orange/red glow, other times green/yellow and other times it’s blue/pink. And if you get the angle just right you’ll see the whole spectrum. It’s really eye-catching. What we will say about the frosted glass finish – as we’ve found in some other phones – early fingerprints seem harder to clean off than if it was glossy. 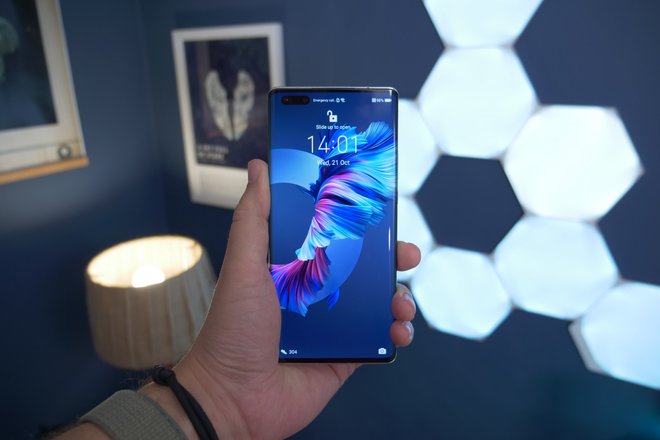 The metal edge at the top and bottom is polished and shiny, while on the sides it’s almost non-existent thanks to Huawei’s ‘Horizon Display’ tech which sees the screen wrap around the edges until it’s virtually perpendicular with the flat surface of the screen. That, in turn, means the volume and power/sleep buttons are pushed further down than normal.

Picking up and holding it, the Mate 40 Pro is quite a hefty device, in both size and weight. That said, it’s not uncomfortable, but those curved glass edges on the sides do make it feel a bit slippery in the hand.

As the market shifts back towards flat screens again, Huawei is taking the opposite approach and going full curve. Its flexible Oled panel inside the phone wraps around the edges of the phone until it’s almost halfway down. In fact, it’s only two degrees off being a perfect 90-degree angle with the main surface. 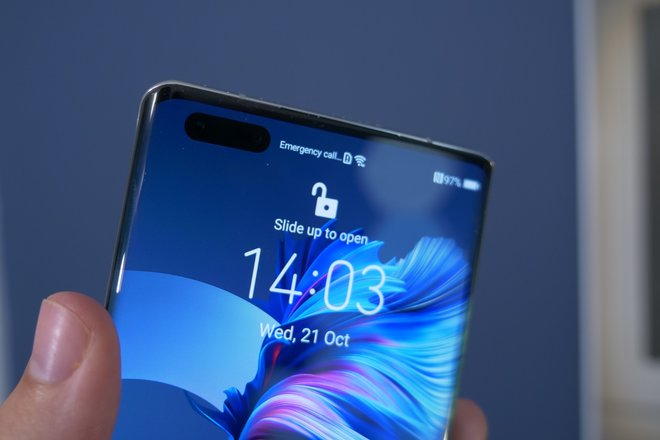 That’s both a good and bad thing. It makes the phone look quite futuristic, but then it also can distort your content at the edges, and tarnish the viewing experience somewhat. It also means we had to adjust the size and shape of the pre-installed SwiftKey keyboard because the letters at the ends of each row wrapped around the edges and were impossible to type on.

It’s a high-resolution panel but doesn’t have a standard format. Its 1344 x 2772 resolution is more pixel-dense than fullHD+ and just in our initial testing we’ve been impressed by the sharpness, colours and brightness. Perhaps the only thing that detracts from the experience is having that wide cutout in the top corner. It’s an awkwardly placed cutout for the cameras and would be more visually pleasing if it was a notch in the middle. At least that way it’d be symmetrical..

It’s unlikely you’ll find many phones as powerful as the Mate 40 Pro on the market, thanks to a newly designed Kirin 9000 processor. Like Apple’s A14 Bionic, it uses a 5nm process for more efficient, faster performance. In fact, Huawei says it packs in more transistors than the iPhone 12 and 12 Pro manage. It also means you get integrated 5G support.

It’s not all about the processor though, there’s 8GB RAM and 256GB storage in our review unit, which is more than enough for just about anything you could ever want to do on your phone. Similarly, there’s a 4,400mAh battery, which should be enough to get most people through a day. 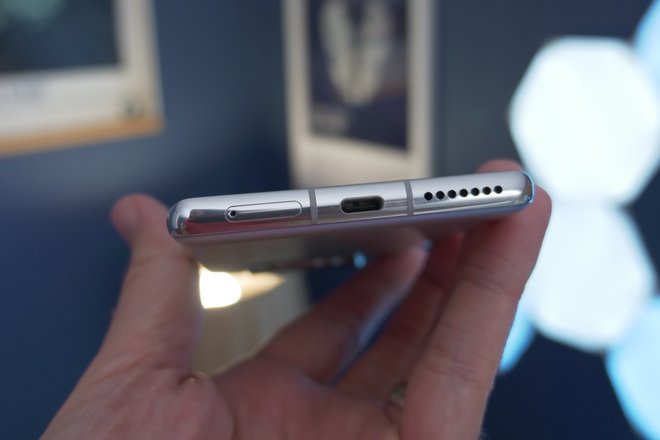 Even if it doesn’t, Huawei fast-charging tech will alleviate any battery anxiety. The included charger in the box features 66W SuperCharge tech, which is similar in performance to Oppo’s 65W SuperVOOC and should mean a full 0-100 charge in well under an hour. Or, if you want to go wireless and get Huawei’s 50W wireless charger, you get the convenience of wireless charging but don’t lose anything in terms of speed.

Huawei has been delivering some of the best camera phones on the market for the past 2-3 years, and the Mate 40 sounds very promising. 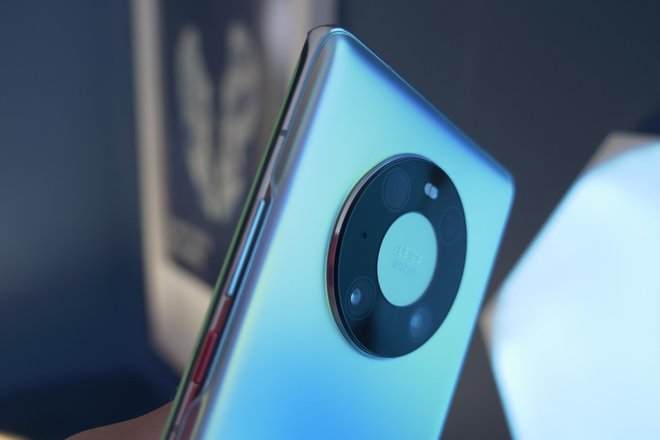 It has a 50-megapixel main sensor and that sensor – by most standards – is big. It’s a 1/1.28-inch sensor that uses Huawei’s RYYB pixel makeup and pixel bins down to just over 12-megapixel images in automatic mode. It’s joined by a periscope-like zoom lens that’ll get you 5x zoom without losing detail and an ultra-wide 20-megapixel camera. Videographers will be happy to know you get 4K video at 60 frames per second.

You also get a dual-camera system on the front that can automatically get switch between wide and ultra-wide when it detects more than one person in the shot.