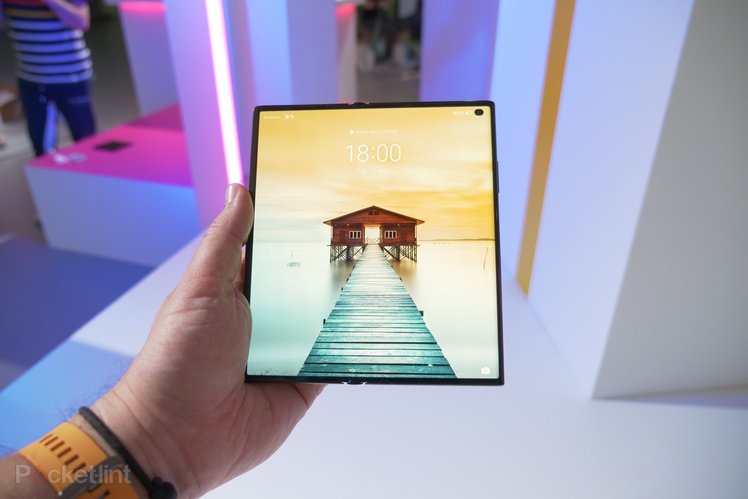 Huawei was among the first companies to launch a folding smartphone with a flexible display in the Mate X. It was something of a pioneer in that regard, delivering a phone to market unlike anything we’d seen before.

The phone featured a tablet sized screen that folded around the hinge to shut, making it feel like a normal smartphone, before being opened up to its full size.

Now Huawei is back with this old formula, but with refinements and improvements that should address a lot of those early durability concerns. It’s slimmer and stronger than before, so can this deliver in ways the likes of the Fold 3 can’t?

There were two major concerns with the first couple of generations of Huawei’s outward folding phones. First: durability. Not just because there’s a bending screen and lots of moving parts in the hinge, but also because the screen was always on the outside and not protected by glass. 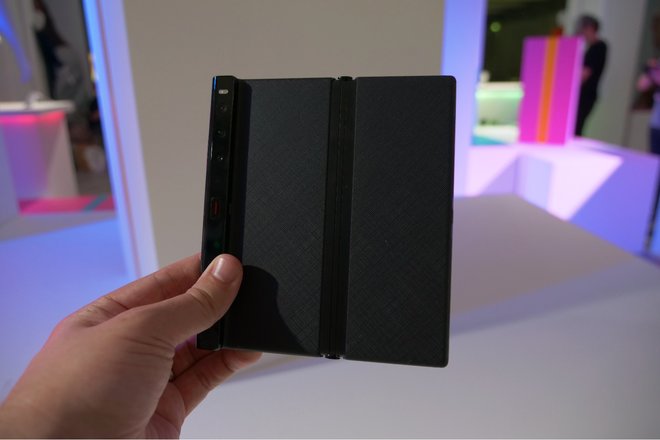 Second: size. A lot of the early folding phones have been the thickness of two regular smartphones stacked together, taking up more space in your pocket and being quite hard to use comfortably one-handed when shut.

Huawei has attempted to address these two pain points with the Mate Xs 2. The flexible display is now made up of four composite layers stacked onto each other. This was to make the screen more durable, but also to reduce the appearance of the crease that appeared very visibly on previous versions.

The phone body is made of a titanium alloy, with a rear that’s infused with fibre-glass, while the hinge has a stainless steel cap on it. The end result is a phone that’s much more durable and capable of surviving every day knocks and bangs. 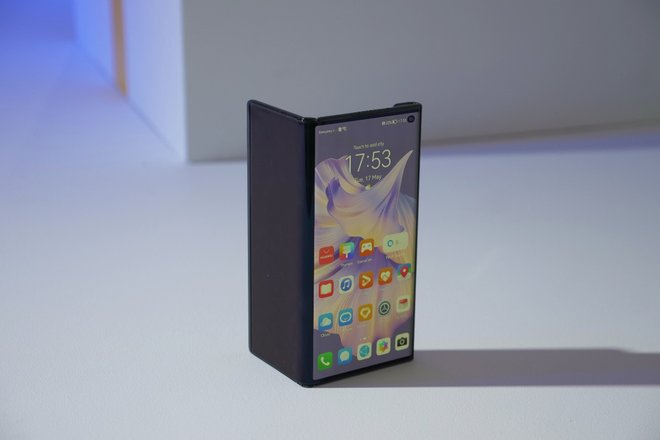 This combination of materials also makes it lighter than the previous Mate Xs, and when open, it’s just 5.4mm thin at its thinnest point.

From a form factor standpoint, it takes the main ideas from the Mate Xs. That means the screen is held in place with a catch on the inside of a grip that runs down one side of the phone. Press the little red button, and it releases the screen for easy unfolding.

This same grip is where you’ll find the three cameras stacked vertically in a line. And it makes for a convenient place to hold the phone in one hand. In some ways this approach reminds us a little of the Kindle Oasis. It’s got that narrow grip on one side, and the rest is a flat, skinny device that’s mostly all screen. 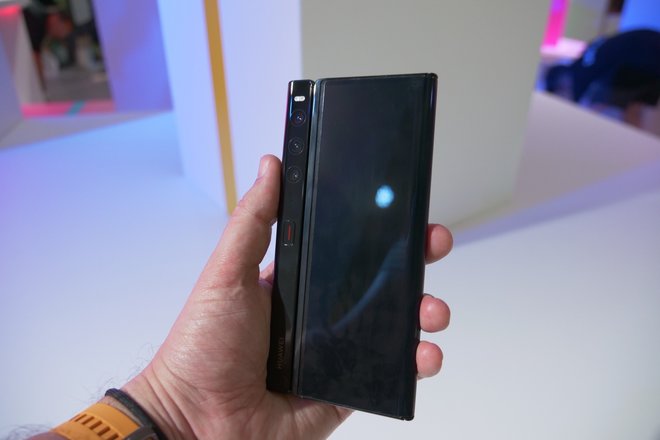 On the whole it feels like a decent device based on our little bit of time with it so far. The hinge feels smooth and solid when moving, and not at all loose. The phone doesn’t feel all that awkward or heavy when held open. It does still feel a little chunky when folded and held in one hand, but it’s not horrendous. You could comfortably get used to it, especially if you’re used to bigger phones anyway.

There’s no denying that the display is the star of the show when it comes to features on the Huawei Mate Xs 2. When open it forms a large 7.8-inch panel that takes up nearly all of the space on the top surface, with skinny bezels all the way around and just one tiny punch-hole selfie camera in the corner. 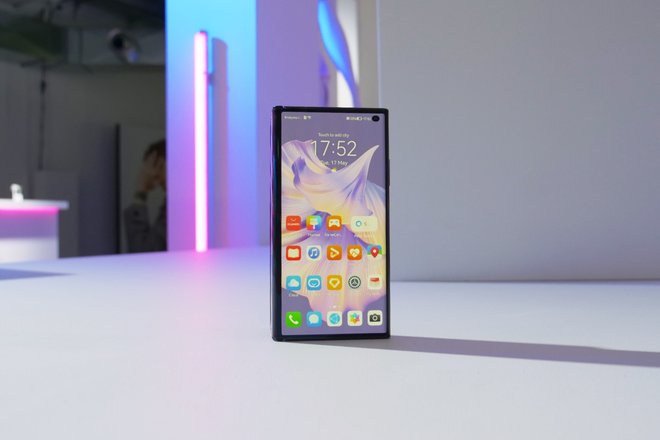 Then, when you fold it shut, it takes the form of a much more traditional 6.5-inch display, just like a normal smartphone. It’s a great panel too, by the looks of things.

We’ve only used it a short while, but it seems very bright and sharp, with great colours. And that shouldn’t be a surprise really. With a resolution of 2200 x 2480 delivering 424 pixels per inch, that means fine details should look really clear and sharp.

It’s OLED based too, and has support for over 1 billion colours. Combined that means excellent colour coverage, a generally all-round vibrant image with high contrast and really dark, inky black levels. What’s more, it’s capable of reaching refresh rates as high as 120Hz, and that should mean animations in the interface are lovely and smooth.

If there’s one part of the spec sheet that reads a little on the underwhelming side, it’s the hardware and specs. It has a Snapdragon 888 processor, the flagship chipset from last year, which – for some – will be a bit of a turn off, especially when considering the outlay for the phone. 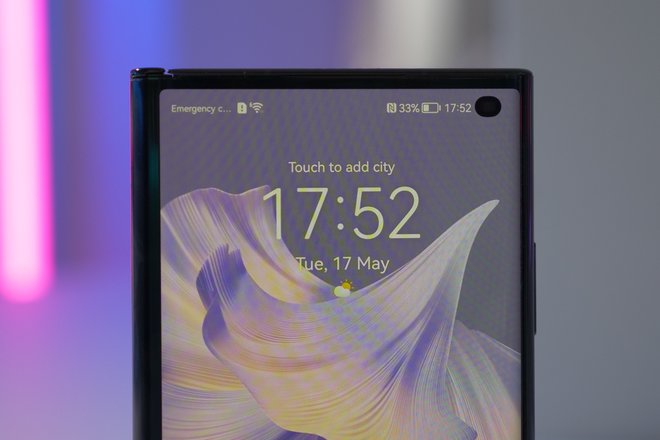 Then there’s the fact it doesn’t support 5G; you get 4G support maximum. Plus, the battery inside seems quite small for a phone this large at 4600mAh. Powering that big, bright and sharp display could drain that quite quickly. Although, again, we do need to test it to see how it performs through an average work week or two.

On the flip side, Huawei’s often been great at battery optimisation in the past, delivering battery life that’s seemingly beyond what its batteries should manage. And there’s always fast charging to fall back on. In this case, that’s 66W SuperCharge. It should give you a speed refill when you’re in a hurry and running out of juice.

Huawei’s long been a company that delivers great cameras in its phones. Even with all the challenges it’s faced in the wake of the trade ban fallout, it continues to deliver versatile and strong phone camera systems. 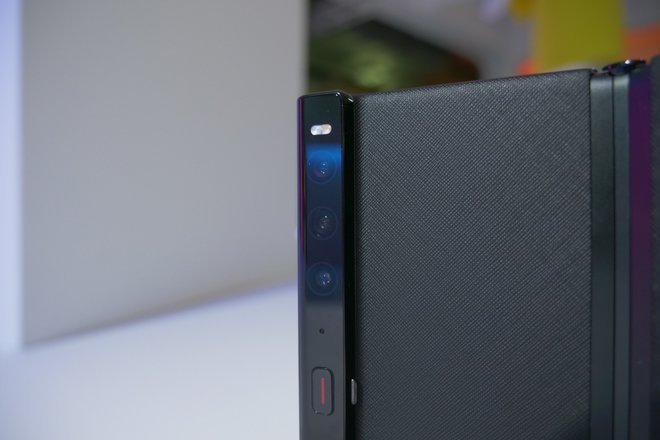 With the Mate Xs 2 you get a triple camera system made up of the usual primary (50-megapixel), ultrawide (8-megapixel) and telephoto zoom with 3x optical (13-megapixel). Combined with some of Huawei’s advanced image processing capabilities, the promise is photos with true to life, but bright and vivid colours.

Of course, without having tested it, we don’t know if it does deliver good results, but based on some early hands-on time, it certainly seems like a strong all-round offering.