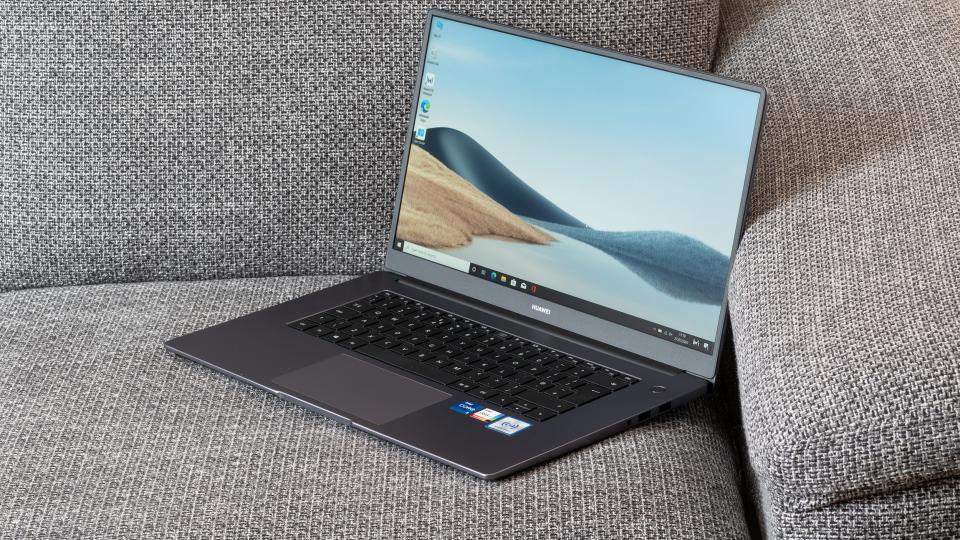 Huawei’s latest MateBook D15 doesn’t try to rewrite the rulebook, it just offers competency and value in a compact package

In this age of ultrabooks, ultraportables, 2-in-1 convertibles, hybrid gaming notebooks and tablets masquerading as laptops, is there much to be said for a traditional bog-standard laptop?

In fact, there’s a bit of a gap in the market for something with a 15.6in screen that doesn’t weigh a ton, has enough power to perform everyday tasks with reasonable dispatch but lacks fancy-pants features like a 360-degree hinge. Crucially, it should also have a price tag that doesn’t make you wince when you tap the “Buy” button.

Huawei MateBook D15 review: What you need to know

The good news is that Huawei’s 2021 MateBook D15 seemingly fits these stringent requirements. It’s a straightforward no-frills laptop with decent dimensions, decent build quality, a decent specification and decent design, and it’s all yours for a decent price. Did I say it’s generally quite decent?

Now, don’t go thinking that decency is another word for dull. Quite the opposite, in fact: the 2020 model of the D15 has long been a favourite here at Expert Reviews, and it’s been sitting in our best laptops list for quite some time as well.

There’s only one version of the new MateBook D15 on sale in the UK and it costs £750. For that money, you get an 11th gen Core i5 processor, a 512GB SSD, 8GB of RAM and a Full HD IPS display. At the time of writing, Huawei is also bundling a free Bluetooth mouse worth £40 and a Sound X speaker worth £150, which is pretty generous.

The most obvious competition comes from last year’s D15. The Core i3 version with a 256GB SSD and 8GB of RAM is available now for £499 while the AMD Ryzen 5 3500U-powered version is even better value at £449.

HP, meanwhile, is currently offering its 15.6in Pavilion notebook with a Ryzen 5 4500U processor, 8GB of RAM and a 512GB SSD for just £650. For that, you get a touchscreen, but it is heavier than the MateBook and has a lower-capacity battery.

Acer’s entry-level i5-powered Aspire 5 is best ignored despite the tempting price of £699 because it only has a 1,366 x 768 resolution display. The Ryzen 7 model has a Full HD screen and a 1TB SSD but it costs £799. At 1.8kg, it’s even heavier than the HP Pavilion; if size and weight are your main concerns rather than screen size, then the excellent 14in Acer Swift 5 is well worth a look as an alternative. 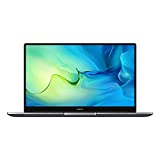 Physically speaking, the 2021 D15 is a dead ringer for the 2020 model. I’m not sure if this is a case of “if it ain’t broke, don’t fix it” or laziness in Huawei’s design department, so let’s be generous and assume the former. The laptop’s size and weight – 358 x 230 x 17mm and 1.56kg – is extremely portable, and the impressive rigid Space Grey aluminium alloy chassis is equally as lavish.

That means the D15 is still just as solid, smart, compact and light a notebook today as it was a year ago. Huawei’s concern about weight and portability has extended to the 65W power supply, too, with a 160g slimline affair with a retractable third prong. 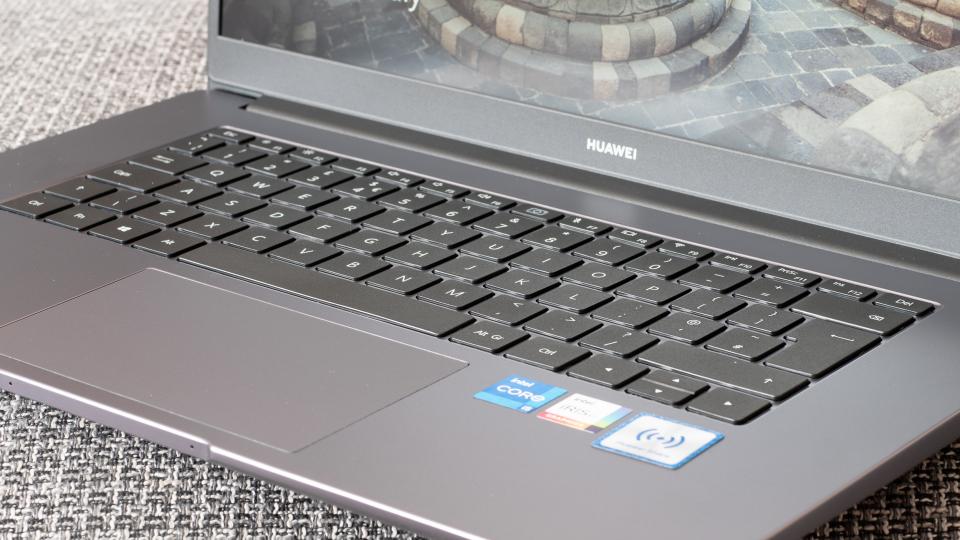 The keyboard does its job well enough: it’s spacious and quiet, though the action feels just a little dead and lacking in feedback. There’s no backlight, however, which at the price is a bit miserly, but the 120 x 73mm Precision trackpad has no wayward tendencies and the click-action at each corner is satisfyingly positive.

Another damp note is that, as is typical of Huawei’s notebooks, the webcam is a pop-up affair hidden below a fake key between F6 and F7. It’s a daft design whose only merit is to give other people an unimpeded view up your nostrils during Zoom chats. More considerately placed is the combined power button and fingerprint scanner, which is well separated from the actual keyboard.

The array of ports hasn’t changed from 2020, so you get three Type-A USB ports – two 2.0 and one 3.2 Gen 1 – and one Type-C 3.1 port, which also doubles as a charging socket. Video output is handled by an HDMI 2.1 port and there’s a 3.5mm audio jack as well. One thing to note is that the Type-C port doesn’t offer DisplayPort or Thunderbolt video output. 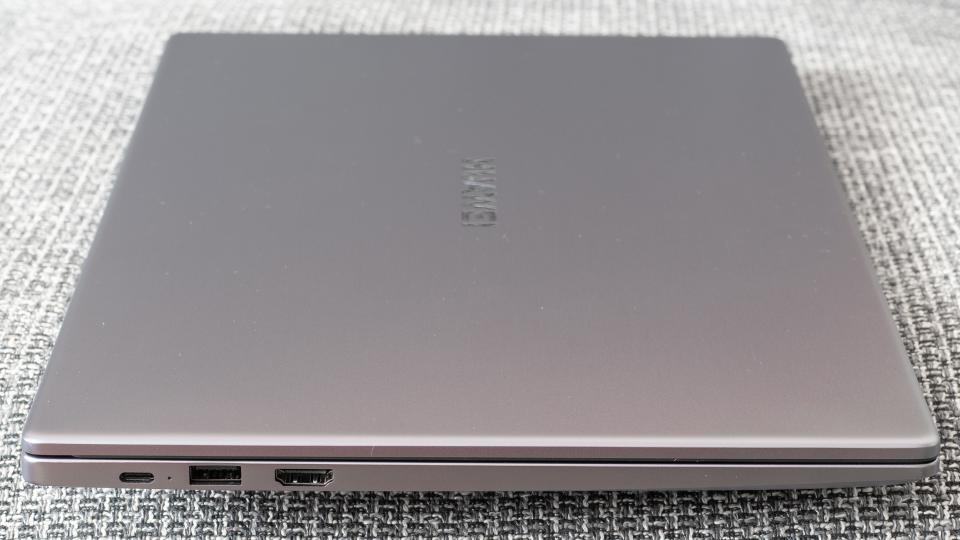 The Intel AX201 Wi-Fi module supports Wi-Fi 6 and Bluetooth 5.1 and there’s an NFC chip to facilitate Huawei’s handy Share phone-linking system, though sadly it only works with Huawei’s own Android/EMUI 11 devices. That’s a shame, because using it to instantly connect your phone and mirror its display on your Windows desktop is really useful. If Huawei opened this up to all Android phones – assuming that is technically possible – it would surely boost its laptop sales.

Another bit of bespoke Huawei software is the PC Manager. This can be used to keep all your drivers up to date and to put the D15 into a special Performance mode, which runs the cooling fans faster and the processor harder.

The bottom of the D15 can be removed easily once you’ve undone the ten Torx T5 screws holding it in place, with the option to replace the SSD (the RAM slots and Wi-Fi card are not accessible). Strangely, however, while there is space for a 2.5in HDD, there’s no way to connect the drive’s SATA cable to the motherboard. If you want to change the operating system rather than the hardware, you’re in luck; launching Ubuntu 20.04 off a USB stick revealed no issues whatsoever, so replacing Windows should be very straightforward.

Both the display and speakers fitted to the 2020 D15 were a bit shoddy, so it’s unfortunate that they’ve not been improved at all in this iteration. The 1,920 x 1,080 IPS screen tops out a maximum brightness of just 135cd/m² (which is very poor), with an sRGB coverage and volume of 55.8% and 57.2% respectively. Delta E colour accuracy was also pretty dreadful at 6.04, and only the contrast ratio of 1,365:1 was in line with what I hoped for.

Subjectively, it looks rather better than the numbers suggest, helped by the Flicker-Free and Reduced Blue Light certifications from TÜV Rheinland and a matte finish that cuts down on reflections. The simple fact that the screen occupies some 87% of the lid area continues to impress, as do the narrow 5.3mm top and side bezels, even if they are a bit cheap looking.

The stereo speakers are a little bass-lite, just like those in the 2020 model. They fire downwards, so they sound more punchy when the D15 is resting on a flat, solid surface, but pick it up and things sound altogether less impressive. 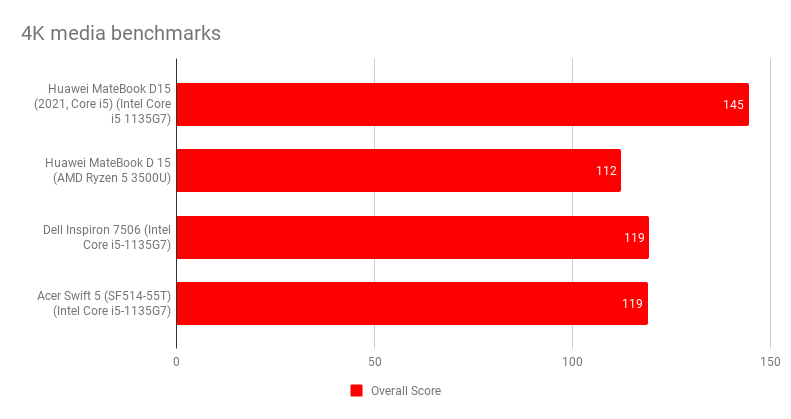 That’s the highest score we’ve seen from an i5 processor and suggests that the Performance mode in Huawei’s PC Manager (which I used for the test) does what it says on the label. For reference, in Balanced mode, the D15 scored 105. It’s the same story when it comes to the Geekbench 5 test, too: the D15 scored 1,402 single-core and 4,681 in multicore, which is a very commendable performance for an i5-based notebook. 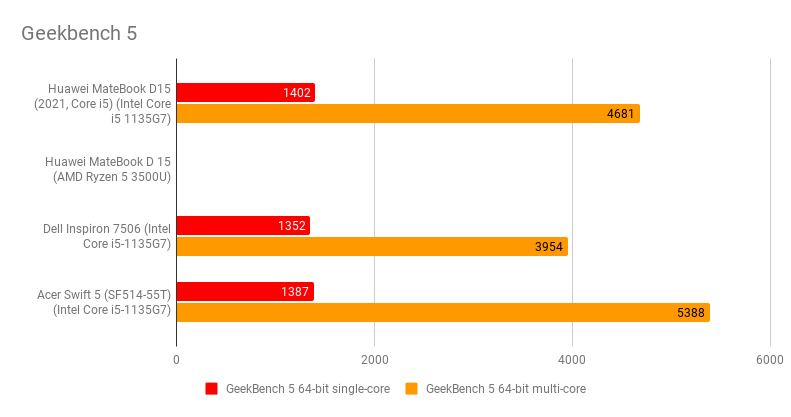 You don’t buy a Core-i5 laptop without discrete graphics for gaming but I still ran our usual Metro: Last Light Redux and DiRT: Showdown tests, and at native screen resolution (again, in Performance mode) they managed 33.5fps and 36fps respectively. This really isn’t all that bad and shows that a little light gaming certainly isn’t out of the question. At a reduced 1,280 x 720 resolution, Doom ran smoothly enough at between 40 and 50fps depending on the level of onscreen mayhem. 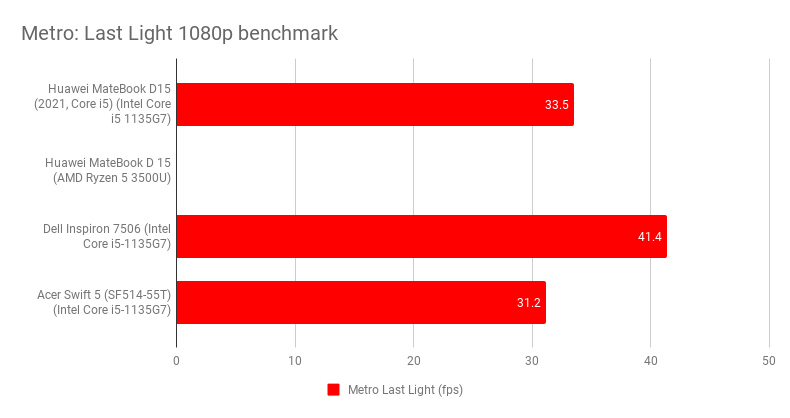 The Samsung-made 512GB SSD did well in our speed tests, too, returning sequential read and write speeds of 2,787MB/s and 2,412 MB/s respectively. As with the old model, the new D15’s drive is divided into 119GB “C” and 337GB “D” partitions, which seems rather pointless.

I recommend converting them into a single partition using Windows’ Disk Manager. It’s a simple enough job to do: first, delete the D partition and then extend the Windows C partition into the free space.

Battery life has taken a gentle stroll along the path to virtue compared to the previous model. The capacity may be the same at 42Wh, but the i5 model lasted for 7hrs 10mins in our battery run-down test, compared to just 5hrs 50mins for the old Ryzen 5 machine. That’s still not a great result, but a boost in performance is always welcome.

Huawei hasn’t taken any massive leaps forward with the new D15, but the small steps it has taken are sufficient to keep it very near the top of our recommended list of affordable laptops for another year, even if the price has gone up and the display hasn’t been given the upgrade it sorely needed.

The odd niggle remains, of course, like the ludicrous positioning of the webcam and the lack of any form of keyboard backlighting, but taken in the round the MateBook D15 is still a solid, smart, competent machine at a good price. What’s the word I’m looking for? Oh, yes: decent.