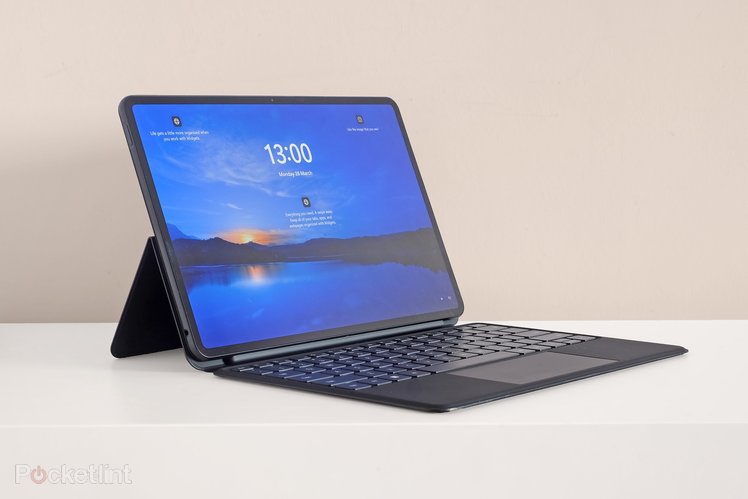 The Huawei MateBook E aims to do the lot.

A tablet that turns into a laptop and runs Windows 11, the MateBook E is essentially Huawei’s answer to the Microsoft Surface Pro 8 – and, to a lesser extent, 2-in-1 wannabes like the iPad Pro.

The hybrid laptop comes in two flavours – the entry-point Intel Core i3 option that comes with 128GB of storage, and our review unit, which is the Intel Core i5 model.

In certain regions, there’s also the Intel Core i7 version to consider, though this does naturally cost a little more.

Whichever you opt for, though, the question is the same: does Huawei find the right blend between a laptop and a tablet, or is this an experience filled with compromise?

We’ve been living with the MateBook E in order to find out.

All hybrids sit somewhere along the tablet-to-laptop spectrum. The Huawei MateBook E sits at the extreme of the tablet end – even more so than the Microsoft Surface Pro 8.

Its screen section, the tablet, weighs 711g, according to our scales. This is slightly heavier than an iPad Pro, but you’d need a set of scales to notice. 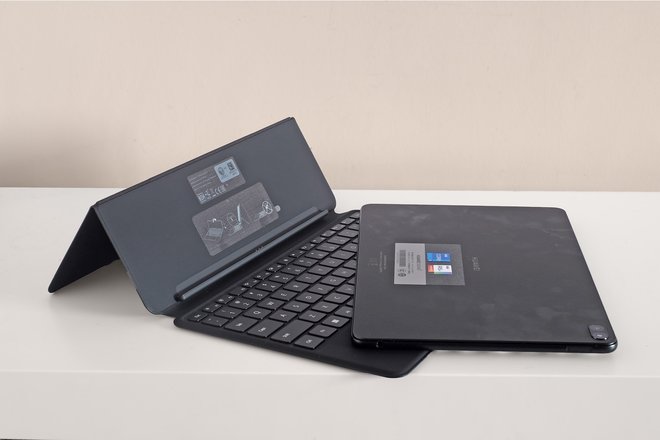 Hand someone a MateBook E and they’d probably be surprised – and possibly horrified – to see Windows 11 pop up when they turn the thing on. This is the key Huawei MateBook E charm.

It is ridiculously compact for what is effectively a full Windows computer. The most impressive part is that Huawei even fits a fan inside this guy, too, with little air in/out grilles on the top side of the tablet.

If you’re tempted to use the Huawei MateBook E in the bath – something we’ve done with countless tablets – perhaps don’t. Get water in these ports, and it may be game over for this hybrid.

Like Huawei’s recent ‘normal’ tablets, the MateBook E does not use any metal or glass in the casing. The back and sides are plastic, but their rigidity is just as good as any style-first design.

Its rear has a pleasant, soft-touch finish, but is a fingerprint terror. The soft-touch coating is also not very tough; we’ve managed to graze part of it despite keeping it at home 24/7. Treat this one kindly.

The Huawei MateBook E gets a lot more interesting when you add the case. When closed up with the tablet section inside, it looks like a standard folio design, but is home to a full-size keyboard and a trackpad.

Once held in place with the case’s magnets, the Huawei MateBook E starts to feel just as much of a laptop as the Microsoft Surface Pro 8 does. Huawei’s special sauce is found around the back, though. 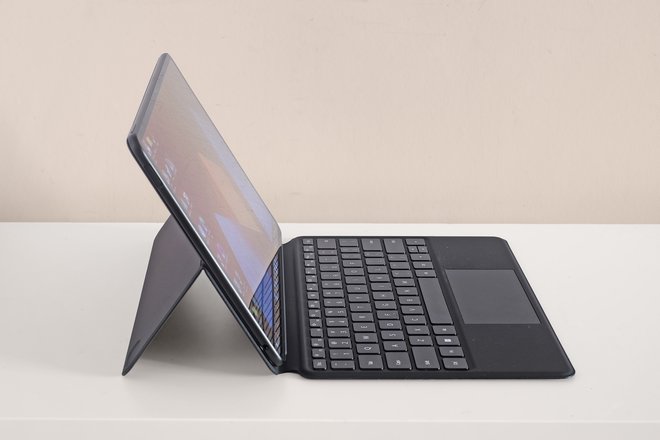 Where Microsoft uses a kickstand built into the screen part, the Huawei MateBook E’s case has an invisible hinge in the rear flap. When you first bend over the back half to form a stand, it’ll feel like you’re at risk of snapping the case in half. However, this is actually a miniature design miracle – the surprisingly strong, wafer-thin hinged stand has no trouble holding the display up at a whole host of different angles.

We don’t know how Huawei has managed this, but it works.

Eat that, then, Microsoft? Well, not quite. We started using the Huawei MateBook E as our main work PC and quickly found a few little issues with the keyboard half of the case.

It is nowhere near as stiff as Microsoft’s Surface Pro Type Cover. If you try to work on an uneven surface, you may find the bending of the keyboard depresses the touchpad clicker without you even touching it. We did. It happened quite a lot. 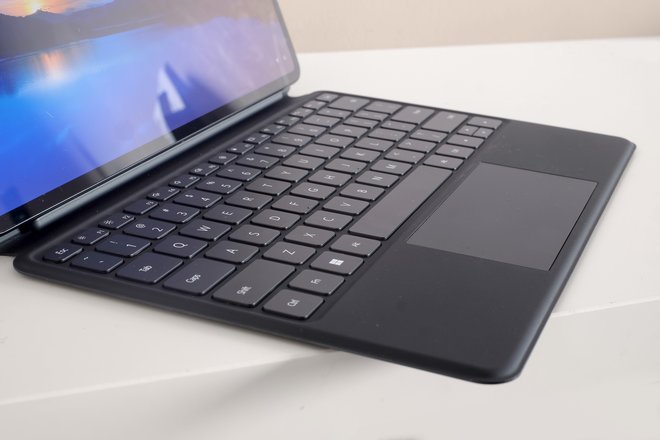 The Huawei MateBook E keyboard also has no backlight, and the touchpad is nowhere near as good as Microsoft’s. Where the Microsoft Type Cover pad is a miniature version of a top-end laptop, with an ultra-smooth glass surface, this is a basic, plastic affair that just doesn’t feel as good. The Huawei keyboard also doesn’t slant up at an angle for more comfortable typing. It’s flat or detached – that’s it.

This is yet more proof of why the Microsoft Type Cover is worth north of three figures, much as it causes us pain every time we add it to our cart when working out how much the latest Microsoft hybrid really costs.

The Huawei MateBook E keyboard isn’t bad, though. Its keys have enough travel and resistance for comfy typing, and, as a complete package, it’s clearly a league above the average tablet accessory. That hinge, as we say, deserves some credit.

So far, the Microsoft Surface Pro 8 has the edge for people who want to use their hybrid as a laptop on the reg. However, the benefits of Huawei’s tablet-led focus are very present when you start to look at the screen. 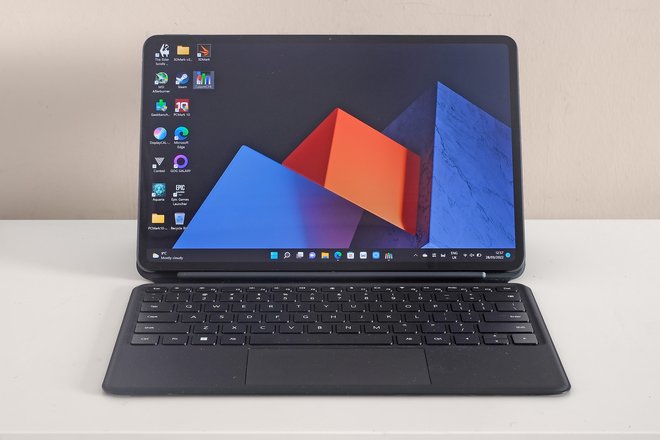 The obvious one is contrast. OLEDs have emissive pixels, meaning they can effectively be switched off when displaying black content to provide flawless black depth. Even the iPad Pro’s mini LED tech can’t match this.

The Huawei MateBook E’s colour depth is also sensational. These days, the big tech companies talk about fulfilling the DCI P3 colour standard – the current benchmark for high-end consumer tech. This screen sails beyond that and maxes out the even richer Adobe RGB standard.

We are not sure we’ve ever seen a hybrid tablet with colour as deep as the Huawei MateBook E’s. We’d also love some more control over the display calibration, and an option to cool it down a bit, but most will probably just bask in those colours.

Brightness of 420 nits is decent for a tablet. Huawei says there’s a high brightness mode that heads up to 600 nits, too, but we couldn’t get this to engage despite blasting the Huawei MateBook E with LED lights and putting it in direct sunlight. It’s possible, then, it needs to be plugged into the mains to work.

Huawei’s MateBook E runs full Windows 11 and has an Intel Core i5 CPU, 16GB RAM and a 512GB SSD. This sounds like an amazing spec for something this thin and light, with it appearing to match a fairly high-end laptop. Sadly, there’s more to it.

The Huawei MateBook E uses the Intel Core i5-1130G7 processor. It’s an Intel variant with hugely restricted power use, and one made for devices that either can’t shift a lot of heat or need to conserve battery life. Both of these apply to the MateBook E. 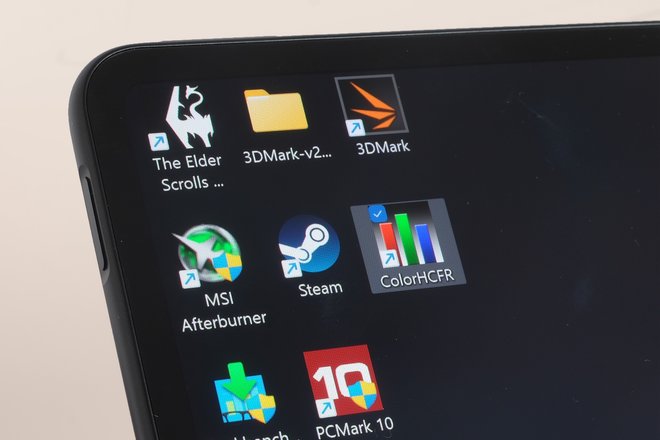 Unfortunately, this also means you miss out on all the key generational benefits of Intel’s 11th Gen processors. And they are absolutely present in the Microsoft Surface Pro 8.

Gaming was the one that disappointed us the most. Intel’s 11th Gen laptop processors introduced us to Intel Xe graphics; a little marvel of a graphics chipset that suddenly meant we could play games like Control, Skyrim Special Edition and The Witcher 3 when on the go. Intel’s integrated graphics used to suck and then, suddenly, they really didn’t.

The MateBook E’s Intel Core i5-1130G7 does have Intel Xe graphics, but the whole system is so power-constrained that its gaming advancements evaporate. Sure, you can still play Skyrim at 1200p resolution and Low settings, and see frame rates above 30fps. However, more recent titles like Control are and The Witcher 3 are unplayable unless you can put up with 20-odd fps frame rates and dips into the teens and below.

We looked a little further into why. The window in which the MateBook E can use the CPU’s turbo mode seems to last no more than a second or so, after which it settles down at around 12W of power use. This is actually less than the Intel Core i5-1130G7 is capable of, showing Huawei had to further rein the processor in to match the hardware. 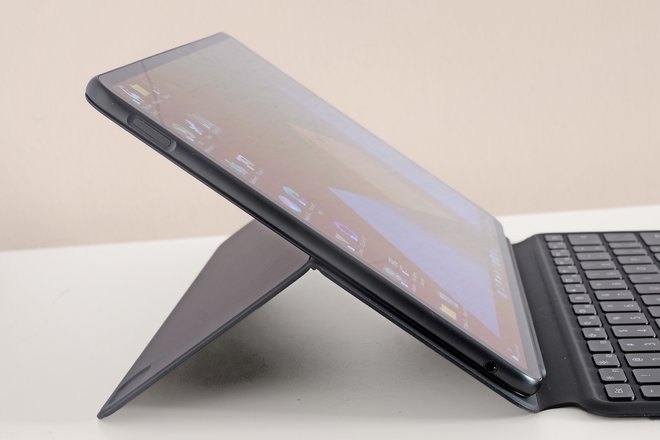 Meanwhile, the Surface Pro 8 we have in is happy to coast along drawing 21-22W. Talk of watts is nerdy stuff, we get it, but it’s also a very clear way to back up our take that the 16GB RAM of the higher-end Huawei MateBook E is actually a bit of a smokescreen.

On paper, it sounds powerful, but you shouldn’t expect the Huawei MateBook E to handle much more than the basics. It’s fab for web browsing, simple productivity app use and even some Photoshop image editing. But you shouldn’t buy one if you want to edit videos, play games or create music using a pro-grade app like Reason.

The Microsoft Surface Pro 8 is going to be much better for those jobs (even if it still wouldn’t be our choice). CPU power is much lower than the iPad Pro’s and is actually quite similar to that of the base iPad.

It also makes us question whether it’s a good idea for anyone to buy the top-end version of the Huawei MateBook E. The much cheaper Core i3 version is likely to perform similarly with simple jobs, making its limited 128GB storage the main issue.

When doing something more taxing than writing documents with the Huawei MateBook E, you’ll likely start to hear the internal fan spinning. It generates little noise, but the sound is quite obvious, as it is higher in pitch than the fan of a proper laptop. It’s also simply unusual to hear fans in something that looks like an Android tablet.

So, the Huawei MateBook E is not as powerful as one might hope. Still, though, that battery-sipping style has to lead to great battery life, right?

It doesn’t. Streaming video from YouTube with the Huawei MateBook E lasts around four and a half hours – far shorter than the Surface Pro 8’s battery life and utterly rubbish among more traditional tablets. 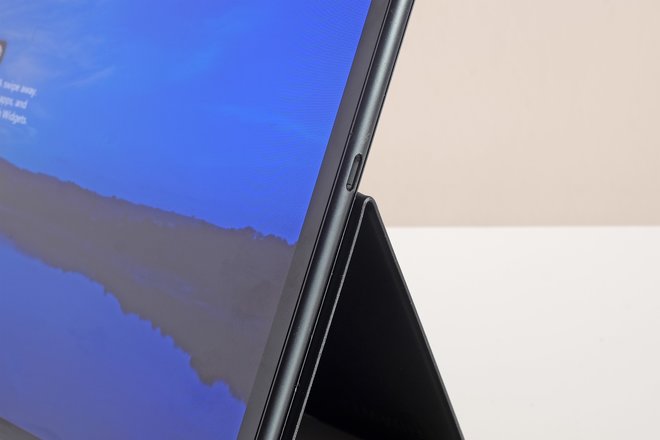 Charging is also a pain if you use the Huawei MateBook E as a laptop because it only has one connector, a USB-C. This means you can’t plug anything else in while it’s on charge unless you get a USB-C dock with power passthrough.

It is more proof that the Huawei MateBook E design was approached more like a tablet with accessories, rather than a true laptop-tablet hybrid.

Let’s not end this review on a downer, though. There’s still some good stuff to talk about.

The Huawei MateBook E has a much better webcam than the vast majority of laptops, with its 8MP camera and image quality comparable with that of a Surface Pro 8. Its rear 13MP camera is pretty poor, but we’ve ended up ignoring it 99% of the time. 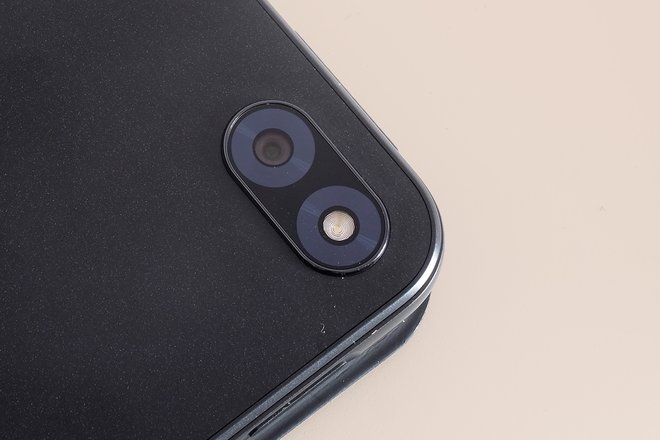 This tablet also has monster speakers that are liable to rip your head off if you accidentally start playing something at max volume.

While the treble and upper mids can be a little abrasive with certain content when the volume is high, the sheer scale of the Huawei MateBook E’s audio impresses, as does the weight of the bass. These speakers make those of the average 3kg gaming laptop seem pretty pathetic.