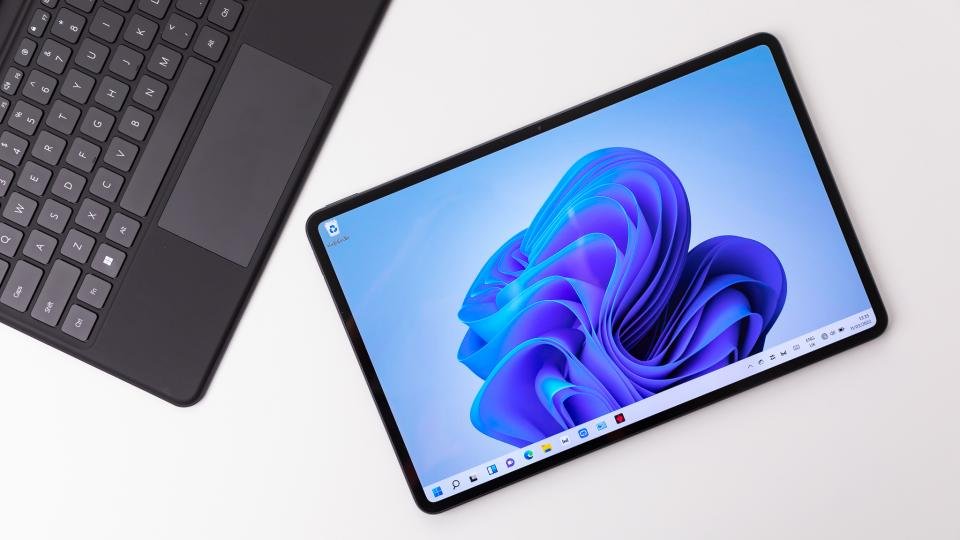 Ah, the Windows tablet, a horse for which nobody has even been able to describe the ideal course. Want to do some real work? Buy a proper laptop. Want to create stuff? Get an iPad. Want something cheap to watch Netflix on? Buy an Android tablet. This is why Windows tablets, other than Microsoft’s Surface Pro range, have never really taken off and it’s this problem Huawei’s new Windows 11 tablet, the MateBook E, has to solve if it’s to gain any sort of commercial traction.

Huawei MateBook E review: What you need to know

However, Huawei has clearly given the question of what people want from a Windows tablet some serious thought when designing the latest MateBook E (you can read our review of the 2017 model here).

Its 12.6in, 16:10 2,560 x 1,600 OLED screen is big enough to accommodate real work but small enough to keep the device nice and portable. The keyboard works well for typing but also makes a great cover to protect the tablet in transit. More to the point, it also comes bundled free of charge with the pricier Core i5 model. 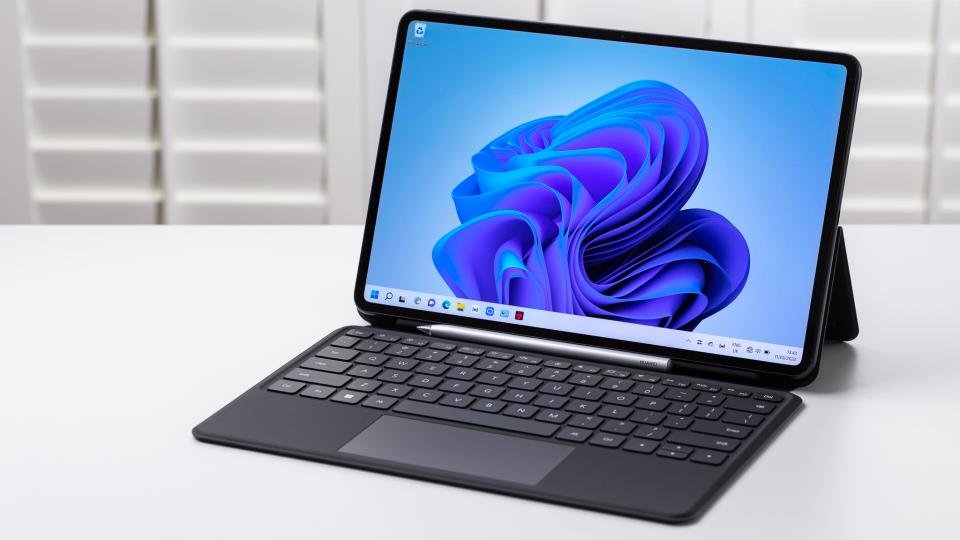 And the internal components are reasonably up to date, too, in the form of 11th Gen Intel Core i3 or Core i5 processors and SSD storage. The speakers, microphones and cameras are similarly high-spec, making the MateBook E an all-round thoroughbred and the only Windows device, and perhaps even the only tablet, a lot of users will ever need.

The MateBook E only comes in one flavour in the UK (there are Core i3 and i7 versions available in China) and this comes with an 11th Gen Core i5-1130G7, 16GB of RAM and 512GB of SSD storage for £999. Unusually, that includes the keyboard cover, making it better value than the equivalent Surface Pro 8.

Microsoft’s recently updated Surface Pro 8 is bigger than the MateBook, has an extra USB-C port and a slightly larger, higher resolution display. Prices start at £949 but add the keyboard and go for 16GB of RAM and the price jumps to £1,300.

The cheapest way into ownership of a Windows tablet is the Microsoft Surface Go 3 but for God’s sake don’t opt for the cheapest Pentium Gold model; it’s unusably underpowered. The 10th generation Core i3 version won’t win any awards for speed but it will at least do the basics at a less glacial pace and comes with a 128GB SSD rather than 64GB of eMMC. For £505 it’s fair, comes with a decent 10.5in screen and has good speakers and cameras. Again, though, you have to pay extra to get a keyboard with it.

HP’s Elite Folio is another rival, although it uses the ARM-based Qualcomm Snapdragon 8cx processor. With a form factor not a million miles away from the MateBook E, the Elite Folio is a clever bit of design and the 17-hour plus battery life is outstanding. However, there are still issues with software compatibility – there’s still no native ARM version of Chrome for Windows – and at £1,200 it’s far from cheap.

If you’re not set on a Windows machine then you could try iPadOS on Apple’s iPad Pro. This superb machine is almost the default choice if you want a powerful tablet for work as well as play. Starting at £960 (not including a keyboard or pen), the 12.9in iPad Pro with 128GB storage iPad Pro packs a stunning Mini-LED display and impressive battery life.

Physically, the new MateBook E is a rather anonymous affair. Were it not for the Huawei name on the back, you’d have no idea who the maker was. The edges and corners are all nicely rounded, so holding it is perfectly comfortable. And, at 7.9mm, it’s thinner than Microsoft’s Surface Pro 8 (9.3mm) and thicker than Apple’s 12.9inch iPad Pro (6.4mm). 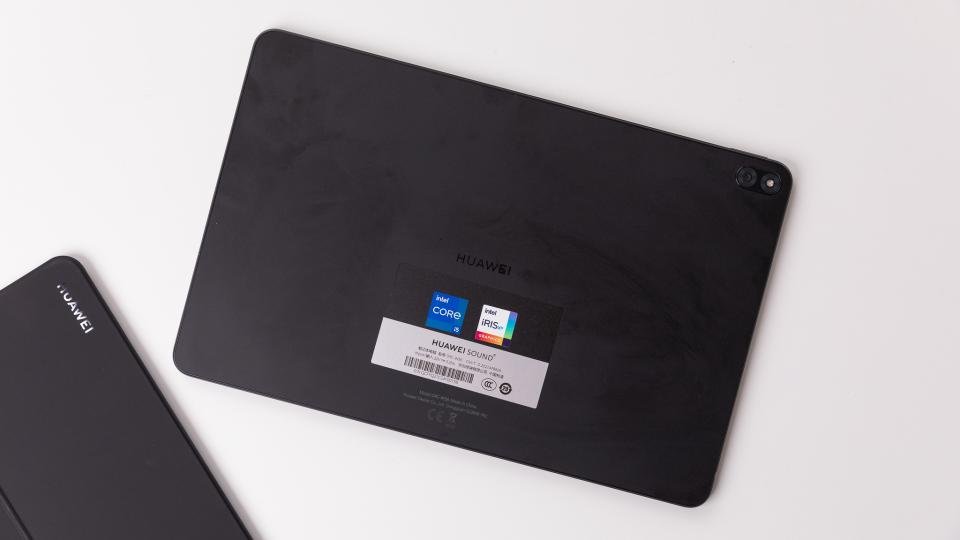 At 709g it again sits somewhere between the 1.17kg Surface tablet and the 682g iPad while the keyboard adds a furter 444g to the weight, doubling the thickness. The tablet’s magnesium alloy frame renders the whole assembly entirely solid and its glass fibre back feels warm and pleasant to the touch. The uniform 7mm bezels surrounding the display are a wee bit wider than those around the iPad Pro 12.9’s display but a 1mm difference is veering on the irrelevant. 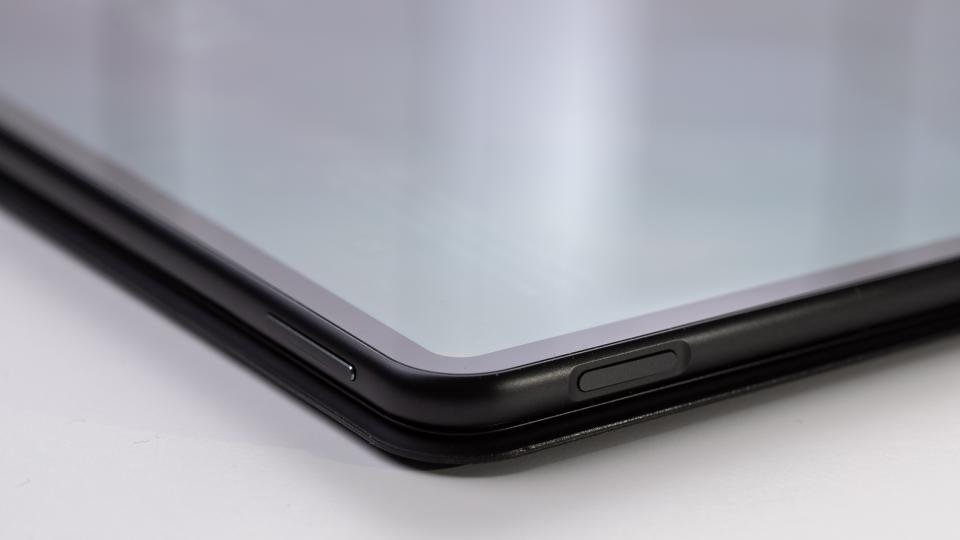 Ports and controls are minimal, as you might expect on a product this slim and light. Indeed, the only connectors are a Thunderbolt 4 USB-C port on the right-hand side and a 3.5mm audio jack on the lower left, while the only external controls are a fingerprint-enabled power button on the left and a volume rocker just around the corner from it on the top edge. 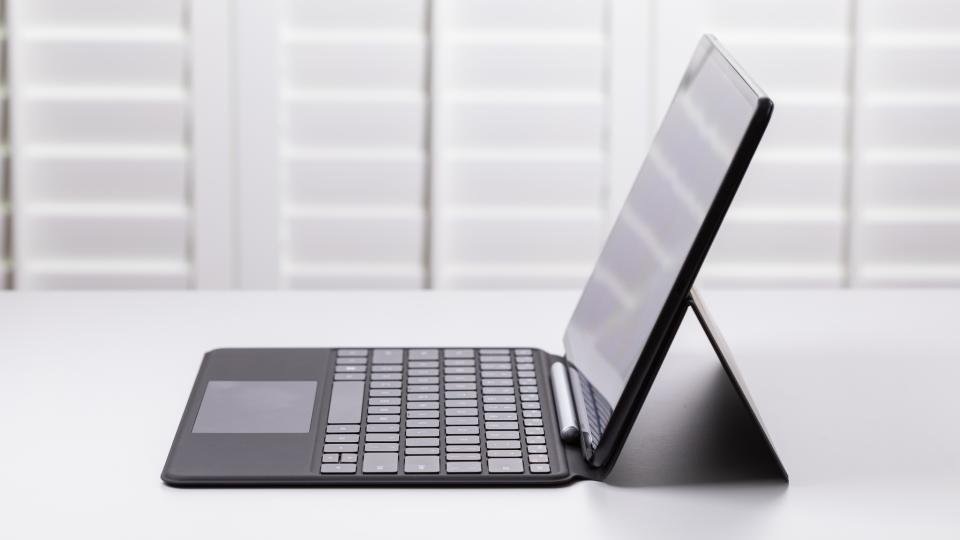 A second USB-C port would have been a worthwhile addition given there isn’t a separate charging port and the narrow fingerprint reader isn’t ideal. Too often, I found I’d pressed it slightly askew necessitating a second tap to unlock.

Alas, there’s no memory card slot or cellular data option, either; all you get is Wi-Fi 6 and Bluetooth, both of which are handled by an Intel AX201 Wi-Fi 6 card.

The bundled Smart Magnetic Keyboard is a simple three-panel design that attaches to the rear of the MateBook E and protects both the front and rear of the tablet. When you want to use it like a laptop, you pull out part of the rear cover which acts as a stand – supporting the tablet at any angle between 110 and 160 degrees – and flip down the front cover to reveal the keyboard. 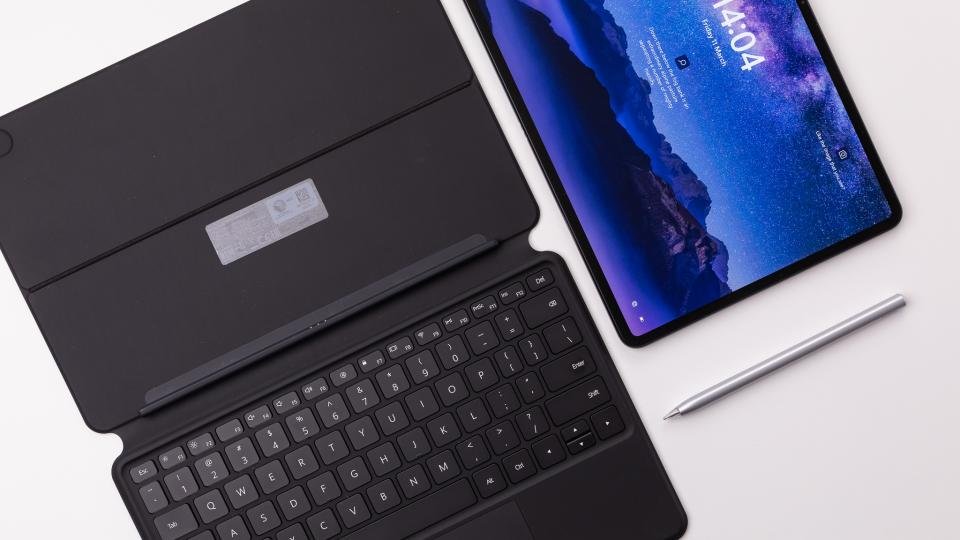 The keyboard provides a comfortable enough typing experience with keys that have a decent 1.3mm of travel, and the 115 x 55mm touchpad has no bad habits. The quality of the click-action puts some proper laptops to shame. The only negative is that the keyboard doesn’t have a backlight; if you desperately want that, you’ll need to shell out for Huawei’s optional, and yet to be released, Glide Keyboard. 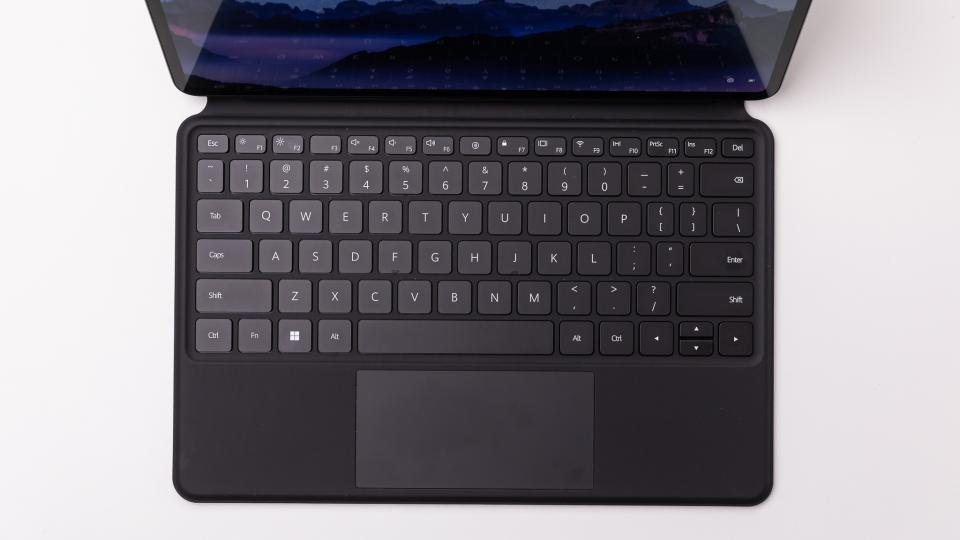 The optional second-generation M-Pencil stylus boasts 2ms latency, 4,096 pressure levels, magnetic attachment to the tablet and wireless charging and is every bit as good as its Microsoft equivalent. The new platinum-coated nib offers less resistance on the screen than the old model and the shape has been subtly changed to make it easier to hold. At £99 it’s pricey, but since the display is MPP compatible, you should be able to use a cheaper third-party device with no trouble. The Renaisser Raphael 520C is one such example, costs only £36 and also offers 4,096 levels of pressure sensitivity. 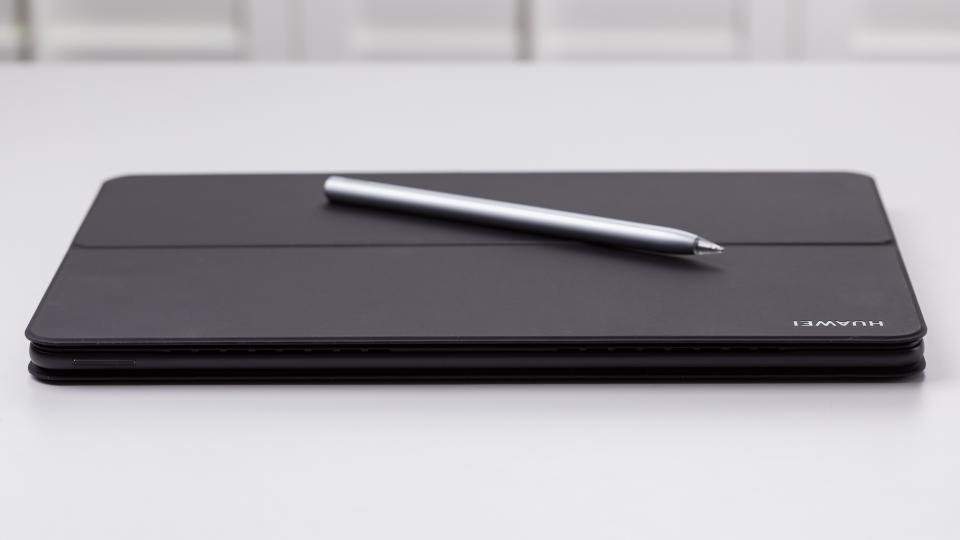 The tablet’s 8MP webcam can shoot video up to a maximum of 1080p at 60fps, which puts it significantly ahead of most laptops on the market while the rear 12.6MP camera not only has a usable flash but can also record video at 4K and 30fps. The webcam isn’t quite as sharp as that fitted to Microsoft’s Surface Pro 8 but it’s not a million miles off, while the rear camera is surprisingly capable, even in less-than-perfect lighting conditions. An array of four microphones and some trick noise cancelling algorithms ensure that you sound as good as you look on video calls. 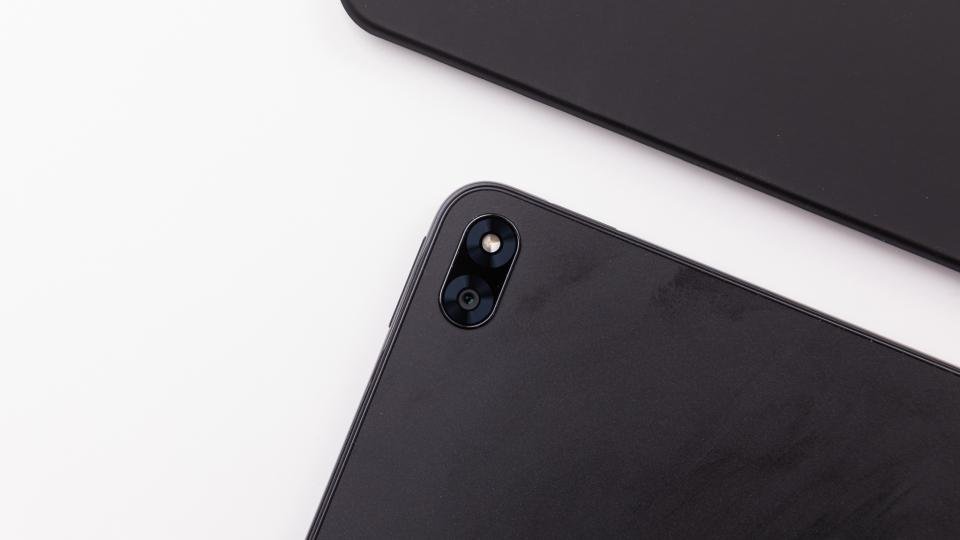 The OLED display that takes up 90% of the MateBook E’s front is the first of its type in a Huawei laptop and is a solid maiden effort. The combination of a 12.6in diagonal and 2,560 x 1,600 resolution results in pixel density of 240ppi, which isn’t as high as the Surface Pro 8 (266ppi) or the iPad Pro 12.9in (264ppi) but difference is small enough that you’d struggle to detect it with the naked eye. 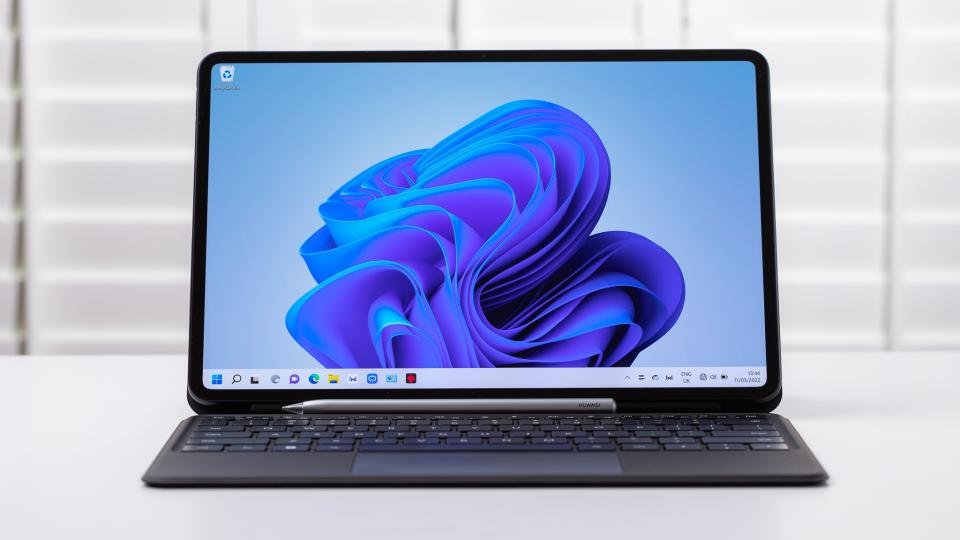 Huawei says the maximum brightness of this screen can reach 600cd/m2 but that’s only when the ambient light detector senses direct sunlight and engages High Brightness Mode. You can’t manually engage HBM. Under normal conditions, the brightness maxes out at a measured 423cd/m2, slightly higher than Huawei’s claimed figure of 400cd/m2. Being OLED, the contrast ratio is infinite.

Huawei has covered all the colour bases. Tuned to the DCI-P3 colour space, the display recorded gamut coverage of 99% and gamut volume of 123% (for the sRGB colour space the numbers were 100% and 173.6% respectively). The Delta E colour accuracy for the P3 colour space was a very impressive 1.1, although this did climb to 2.4 when I switched the screen to the sRGB colour mode using Huawei’s display manager.

The four-speaker sound system does a sterling job, producing a loud and open soundscape with a decent amount of bass and good high-end definition. Huawei claims a peak volume of 80.1dB which compares to the 79.8dB I measured. I’ll forgive the discrepancy.

The first thing to point out here is that the quad-core Core i5-1130G7 processor in the MateBook runs with a TDP of 9W compared to Intel’s quoted maximum of 15W. Squeezing Core processors into tablets always raises thermal issues and the new Huawei is no different, despite its efficient and near-silent fan.

That said, the Core i5 chipset certainly has the performance to get through general productivity tasks pretty sharpish and, thanks to there being 16GB of dual-channel RAM, multitasking never slowed it down, just as long as none of the tasks were graphically taxing and thus beyond its Intel Iris Xe integrated GPU.

If you’re wondering why I’m talking about an 11th generation Intel chip rather than a spiffy new Alder Lake 12th gen, the MateBook E was initially launched in China late last year before Intel’s latest silicon hit the market.

The Expert Reviews in-house media benchmark returned a score of 79, which is comfortably above the point where you can expect interface lag, juddering spreadsheets or delays while swapping between multiple browser tabs.

The Microsoft Surface Pro 8 with its Core i7 chip scored a healthier 134 but the MateBook E’s performance isn’t noticeably slower when undertaking basic productivity tasks. The GeekBench 5 CPU test tells a similar tale; the Core i5 MateBook E will get the job done but without winning medals for speed.

It probably won’t surprise you to discover that you won’t be doing any serious gaming on the MateBook E. It managed to run DiRT Showdown at 57fps at 720p and Metro Last Light Redux at 35fps at 1080p, which tells us that anything other than a bit of casual mobile gaming is well outside its comfort zone.

The general zippiness of the MateBook E is helped by the fast but indeterminate brand 512GB PCIe 3.0 SSD, which recorded sequential read and write speeds of 2,900MB/ssec and 2,260MB/sec respectively. Those are very respectable numbers and considerably faster than the Kioxia-made 256GB SSD inside the Surface Pro 8. Of course, this being a Huawei, the SSD is divided into a 119GB Windows partition and a 337GB Data partition, which makes no sense whatsoever.

As with most Windows tablets, battery life is not the strongest card in the MateBook E’s hand. Our usual video rundown test drained the 42Wh battery in 6hrs 49mins, which compares well with the Surface Pro 8 at 7hrs 11mins from a 51.1Wh battery but poorly to the Apple iPad Pro 12.9in, which kept going for 11hrs 35mins with a 40.9Wh battery. The HP Elite Folio leaves them all in the dust at over 17 hours.

The MateBook E is the perfect Windows tablet: a device with enough performance to easily perform productivity tasks, a display big enough to enjoy media on and a good bundled keyboard. Much the same can of course be said of Microsoft’s Surface Pro 8 but that is bigger and heavier and will set you back £300 more once you pay the extra for the keyboard cover.

The mediocre battery life and solitary USB-C port do count against it but these are small concerns for such a device. Otherwise, it’s a fantastic 2-in-1 and the most balanced Windows tablet on the market.