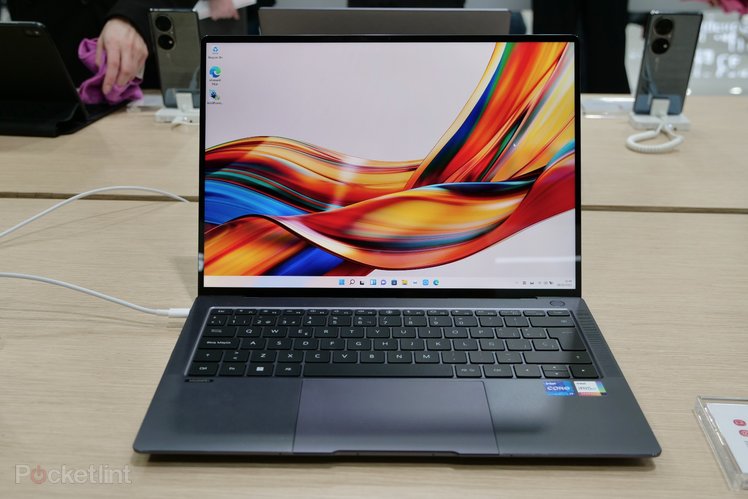 Over the past few years, Huawei’s been developing its range of premium Windows laptops. Things have really kicked up a notch over the past 12 months though. With interest dropping in its smartphones, it’s been hard at work expanding its ecosystem of other devices.

At MWC 2022 in Barcelona, Huawei introduced two new Windows-powered machines. One of those is the high-end MateBook X Pro, refreshed for 2022 with a new design, new trackpad and a new display.

It’s safe to say one of Huawei’s biggest priorities for the MateBook X Pro was to make it as slim and sleek as possible. The notebook is incredibly thin, measuring around 5.5mm at its thinnest point. This is enabled by a tapering wedge-shaped design, with the thickest point still being a relatively skinny 15.5mm. 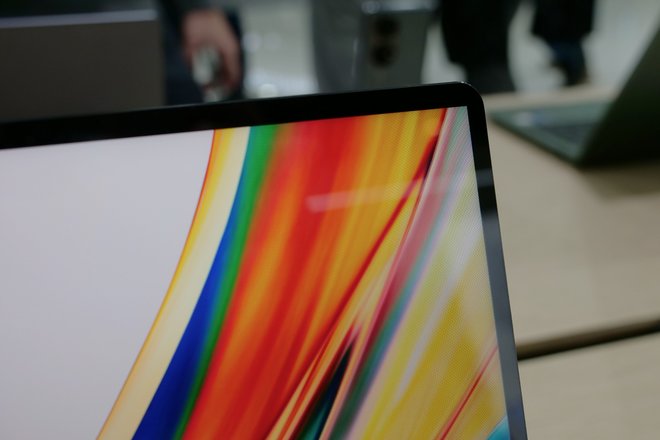 The casing is manufactured from anodised aluminium, which coats the entire body of the machine, and gives it a high end, luxurious appearance. In person, it’s a genuinely lovely thing to look at, and to touch. It’s available in Space Grey, but we also saw a version of the machine in a stunning soft green colour.

Like the rest of the machine, the bezels around the display are super skinny as well, and that means the screen completely dominates that area of the laptop. It’s really immersive (but more on that later).

Being a laptop going for that minimal, stylish look, the MateBook X Pro doesn’t have a tonne of port options. Instead, Huawei equipped it with four USB Type-C ports, each capable of accepting charge. 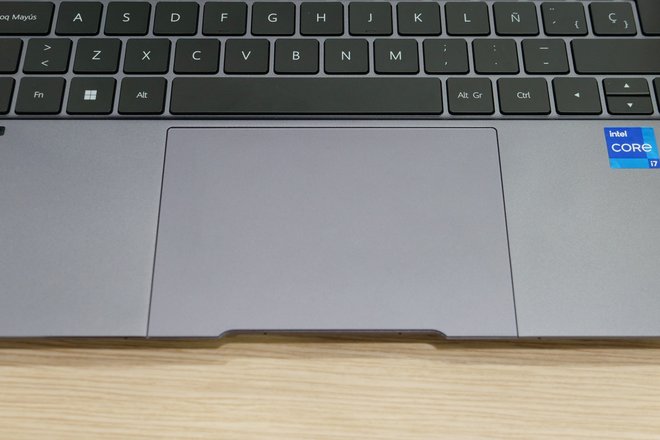 One other addition, is the fingerprint sensor built into the body of the laptop – above the keyboard – which also doubles as a power button. The keyboard itself is designed to be a pleasure to type on too, with 1.3mm of key travel.

We had a quick bash on it, and it certainly seemed like one we’d take no time to get up to speed on, and one with keys which require very little force to press. It has a massive redesigned trackpad too, which pushes all the way to the front edge of the laptop.

It’s not the design that makes the trackpad different this year though, it’s the functionality. Huawei’s added in some handy gesture controls, like the ability to swipe up and down the left or right side to adjust volume and brightness. It also has a Huawei phone feature: double knock to screenshot.

It’s safe to say, Huawei’s latest laptop screen isn’t a conventional format. But that’s a good thing. It’s a 3:2 ratio 14.2-inch display, which means it’s big, but also useful for lots of things beyond watching videos. It gives you that feel of having a bit more space for the stuff between toolbars and for split-screen multitasking with two windows side-by-side. 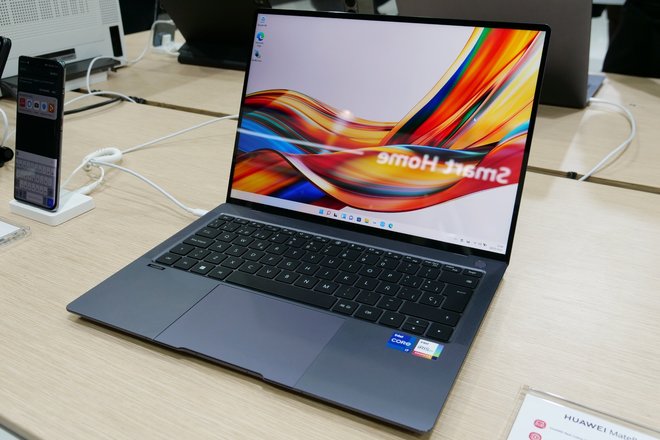 From first impressions alone, it looks like a genuinely fantastic panel. It’s vibrant and colour rich, and didn’t seem too oversaturated. Like a lot of high end smartphone screens, it supports over 1 billion colours for rich colour appearance as well as up to 90Hz refresh rates.

It has a glossy finish, which means it does appear to be a little reflective, but we’ll need more time with it to determine whether or not that’s an issue. What is interesting, is that it also supports multi-touch up to 10 points. That literally means you can touch the screen with all ten of your fingers and thumbs if you really wanted to.

From a software standpoint, it runs Windows 11 Home, but is also one of the first devices to support Huawei’s so-called Super Device effort. 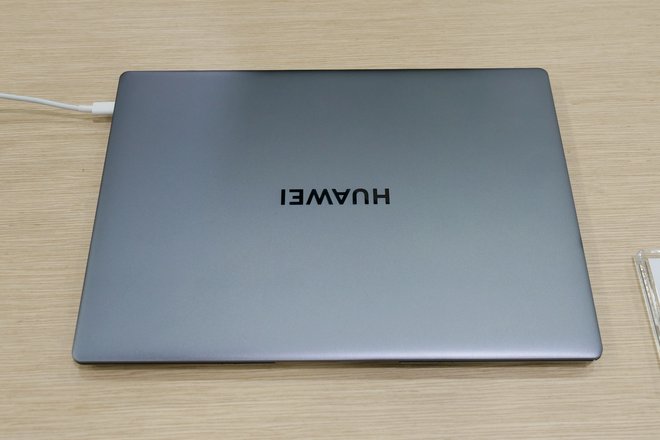 This is effectively away to seamlessly collaborate with other Huawei devices, like monitors, earphones, smartphones and tablets. The idea being, you can simply drag and drop on the relevant graphic, and start controlling that device. What’s more, Huawei’s opening up support for mobile apps through App Gallery on these latest Windows machines, giving you more apps to play with.

With just a brief hands-on, we obviously can’t tell what the laptop is like to use day-in and day-out, but there should be enough power in here to keep most people happy. With the 11th generation Intel Core i7 processor at the helm, plus 16GB RAM and 1TB of speedy NVMe storage, it should play the part just fine. 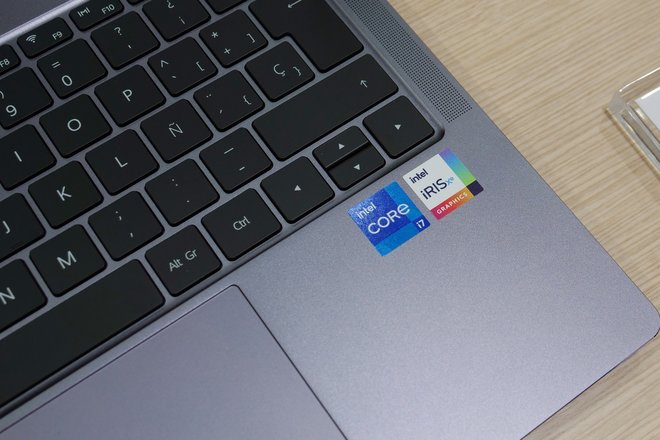 This isn’t a game for gamers or high-end video and animation creators – that’s evident by the lack of dedicated GPU – but for most tasks, it should be great. And it should run relatively quietly too. Huawei upgraded the internal cooling system with much more efficient shark fin fans and a larger vapour chamber than the previous MateBook X Pro.

What’s more, it doesn’t require a massive external power brick to charge quickly. It uses a 90W SuperCharge adapter – also compatible with Huawei’s smartphones – and can top up the internal 60Whr battery quickly.

To round off the experience of the MateBook X Pro (2022), there are a couple of enhancements to audio and communication too. For instance, Huawei has moved the webcam back to where it should be: in the top bezel of the display, not in a pop-up button on the keyboard. Despite that, it’s still only 720p resolution, which seems low in this day and age.

However, from an audio standpoint. It shouldn’t disappoint at all. There are four microphones dotted around the body, designed to help get rid of ambient noise when you’re in video or voice calls. 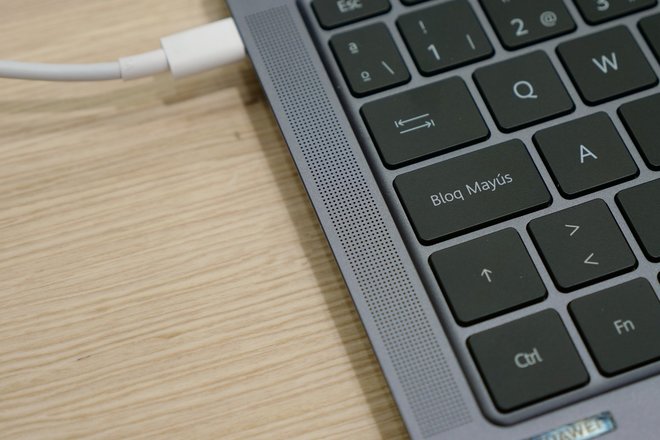 Plus, when you do want to use it for listening to music or watching movies, you get rich, bass-filled audio delivered by a new 6-speaker system that includes woofers for those low notes.