You are here: Home / Technology News / Mobile / Huawei P30 Lite review: A well-priced beauty at a fraction of the cost Roughly half the price of Huawei’s flagship P-series phones, the P30 Lite looks just as good but lacks key features

It’s not much of a saving, but if you’ve been eyeing up the Huawei P30 Lite, then now might be the time to buy. Usually priced at £200, you can currently pick one up for £180. Its lack of Google support moving forward is a bit of a kicker, but at this new low price, it’s a much easier pill to swallow.Currys PC WorldWas £200Now £180Buy Now

As we rapidly approach the midpoint of the year, Huawei’s smartphone offering has begun to expand exponentially. We’ve already seen a wide range of handsets from the Chinese manufacturer over the past several months, but few of these have dipped far enough below a four-figured asking price that they’ve gained any sort of recommendation for lighter wallets. Thankfully, this isn’t a problem with Huawei’s P30 Lite.

The curious thing about the P30 Lite is that Huawei made no mention of its well-priced flagship at the big P30 launch event. It snuck under the radar quite unexpectedly, although perhaps Huawei didn’t want to shine too much of a harsh light on how much cash its – albeit rather impressive – duo of flagship smartphones will inevitably leech from your wallet. Huawei P30 Lite review: What you need to know

Still, that’s precisely why Huawei’s P30 Lite exists. If you don’t quite have the mortgage-inducing sums of cash to splurge on its latest and greatest handsets, the P30 Lite offers a similar sort of experience at half the price. There are a few cutbacks in key areas, though. Crucially, while they might look similar, you’ll begin to see that these are fundamentally different phones when you peer under the bonnet. Rather than using the P30 and P30 Pro’s top-end Kirin 980 processor, the P30 Lite is instead fitted with a comparatively low-powered Kirin 710 chipset and only 4GB of RAM.

You’ll find a similar-looking triple camera arrangement on the rear of the phone, although the P30 Lite doesn’t benefit from the regular P30’s optical zoom capabilities, and its specifications are tweaked a little bit in order to bring the price down. Regardless, I still see this as a marvellously well-rounded package considering how much Huawei is charging, even if it doesn’t initially look quite as appealing as its siblings.

The P30 Lite’s cutbacks bring the price down to a far more palatable £329. That’s slightly cheaper than what the Mate 20’s “Lite” variant launched for late last year and is just under half the price of the P30. It also represents a significant total saving of £570 when compared with the beefed-up P30 Pro. That’s not to say that the P30 Lite offers unrivalled value for money, though. In fact, there are some slightly better-priced alternatives worth considering, such as Xiaomi’s Snapdragon 845-powered Pocophone F1, which is a flagship smartphone in almost every regard and costs £345. There’s also the Sony Xperia 10 Plus, with its intriguing 21:9 aspect ratio screen, while the Nokia 8.1 is a worthy adversary, too.

Thankfully, Huawei has made very few cutbacks with the P30 Lite’s overall design. It looks just as fanciful as ever, and while it lacks the iPhone-like silver tinted edges of its siblings, the 3D curved glass rear is comfortable to hold and the iridescent, colour-gradient finish is stunning. The back of the phone I was sent to review, for instance, nicely fades from an ocean blue to a dark, orchid purple.

I’m confident in saying that the P30 Lite looks equally as eye-catching as the rest of the P-series lineup and could easily be mistaken for a phone that costs maybe two, or even three, times the price. Although, as is often the case with these lavish-looking, glossy slabs of aluminium, the phone does pick up smudges rather easily. The triple camera array also manages to poke out far enough that the P30 Lite doesn’t sit particularly well on a flat surface. Likewise, the P30 Lite doesn’t include one of Huawei’s fancy in-display fingerprint readers for secure unlocking. Instead, there’s a clumsily-placed fingerprint sensor on the back of the phone, although you can still enable the speedy facial unlock if you prefer. The rest of the phone’s particulars all remain in the right places, however. The power button and volume rocker can be found on the right edge, with a USB Type-C port, speaker grill and 3.5mm headphone jack sitting at the bottom.

Sadly, the P30 Lite isn’t coated in Gorilla Glass and lacks any form of officially-rated dust and waterproofing, so it won’t hold up quite so well against the elements. That said, there is a pre-fitted screen protector, which should allow for a little bit of protection against scratches and short drops.

Another point of divergence between Huawei’s handsets is the screen. Like its stablemates, the P30 Lite includes a nifty, circular drop notch that eats its way into the top of the display, as well as skinny screen-bordering bezels on the sides and bottom of the phone. But, unlike its stablemates, the 6.15in, 2,312 x 1,080 resolution screen uses an LCD panel rather than fancy OLED tech. It’s certainly not a bad screen for the price – Apple has only recently adopted OLED for its high-end iPhones – but this results in a black that doesn’t look quite as inky, while a slightly weaker contrast is also on the cards.

Technically speaking, the P30 Lite’s screen could be better. On the phone’s “normal” display profile, the P30 Lite did manage to cover 93% of the sRGB colour gamut, although it isn’t very colour accurate. You can choose the “vivid” colour mode if you prefer, although this is a little bit too oversaturated for my tastes. A recorded contrast ratio of 910:1 isn’t the sharpest either, although it is bright enough for sunny conditions with a peak luminance of 416cd/m².

The P30 Lite is powered by Huawei’s own low-powered Kirin 710 mobile processor; a step down from the nippy Kirin 980 chip found in both the regular P30 and P30 Pro. This octa-core CPU is built using a larger, 12nm fabrication process, and includes four cores clocked at 2.2GHz with a further four cores clocked at 1.7GHz. It works with 4GB of RAM for multitasking and 128GB of internal storage, which can be expanded via microSD.

As you might expect, the P30 Lite isn’t capable of the same sort of blisteringly fast speeds as its pricier siblings, although it’s certainly no slouch. The phone’s performance is snappy, with a Geekbench 4 single and multi-core benchmark result of 1,534 and 5,469 respectively. Comparatively speaking, that’s a much better score than Sony’s similarly priced Xperia 10 Plus and is very close to the sort of experience you can expect from the Nokia 8.1.

Gaming isn’t the P30 Lite’s strong suit. Despite Huawei’s marketing-driven waffle about enhanced gaming performance, the embedded Mali-G51 GPU isn’t really up to snuff and struggles to play some of the latest games on the Google Play Store at a decent frame rate. You won’t find any issues with older, simpler titles but don’t expect premium visual quality and silky smooth motion.

Which leads me to the P30 Lite’s unimpressive battery life. In our in-house video rundown battery test, where brightness is set to 170cd/m² and data connections are disabled, the phone only lasted 10hrs 19mins before needing a recharge. That’s by far the least stamina of the new P bunch, with the regular P30 lasting over eight hours longer.

Where things begin to get more interesting is in the P30 Lite’s photographic capabilities. At a time when dual camera arrangements on this end of the price scale are as common as 18:9 screens and USB Type-C charging, the P30 Lite is equipped with a triple camera arrangement on the rear, just like the regular P30. 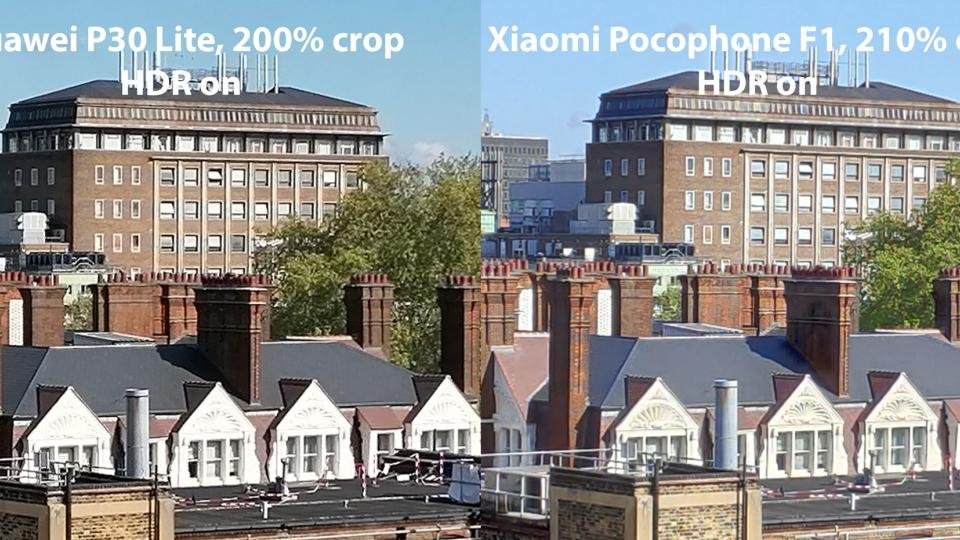 The quality of the P30 Lite’s images is actually rather good. It might not be a scratch on the P30’s output, but, generally speaking, images are filled with detail, colours are accurately represented, and there doesn’t seem to be too much visual noise when used in low-light environments.

The phone’s auto shooting mode, on the other hand, has an annoying tendency to overexpose most images. This is a problem we keep seeing in Huawei’s camera software and, annoying as it is, it isn’t something a little drag of the exposure slider can’t fix. And, as with Huawei’s other smartphones, there’s a long list of shooting modes at your disposal, including time-lapse, night and portrait modes.

Video resolution is limited to 1080p, although you can choose to shoot at 60fps or in 18.7:9 aspect ratio. Footage can also be recorded in the H.265 video compression format, which is the same encoding format used by Apple’s new iPhones. This means that 1080p/60fps files occupy roughly half the space they used to on the phone’s storage.

Disappointingly, Huawei’s P30 Lite is a bit of a mixed bag. If you look past its lavish looks and triple camera array, you’ll find a phone that doesn’t quite match up against its rivals, even if it does represent a significant saving on its P-series stablemates.

But the biggest problem for the P30 Lite is that the Xiaomi Pocophone F1 is even better and costs just a little bit more. That’s not necessarily Huawei’s fault per se, but there’s no denying that Xiaomi has been storming through the mid-priced market in recent months. Although the P30 Lite is a decent enough phone in its own right, I know where I’d rather spend my money.