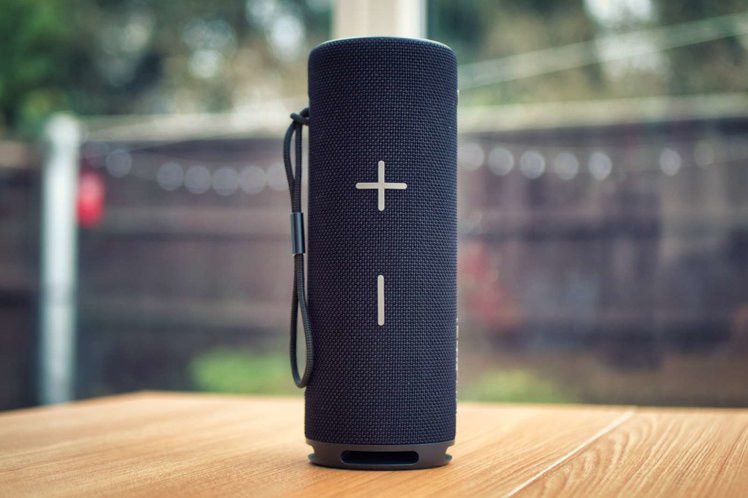 Like the Huawei Sound and Sound X speakers that we’ve reviewed previously, the Huawei Sound Joy is co-engineered with Devialet, a renowned French audio manufacturer. This time, though, it comes in a handy portable form-factor that’s just a tad taller than a standard can of beer.

Huawei’s previous speakers were a little unusual, being wired home speakers but offering little in the way of smart features. The Sound Joy, however, makes a lot more sense with its built-in battery, but can it deliver Devialet sound quality on the go?

The shape of the Sound Joy means it can easily be slipped into a bottle pocket on a backpack or even a bicycle’s bottle holder. It’s not especially heavy either, but it has enough mass to give the speaker a feeling of quality without becoming cumbersome to travel with. The attached strap can be secured around your wrist or clipped onto a bag with ease and is a nice inclusion. 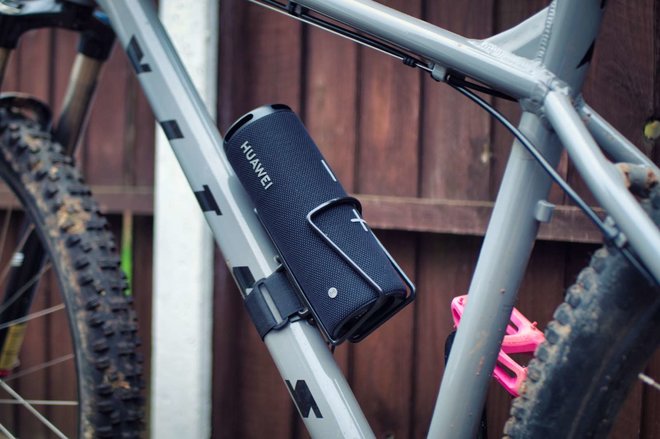 The speaker is IP67 certified, so it won’t be fazed by harsh weather and can withstand submersion in up to a metre of water. Huawei says the woven fabric outer provides “robust, rugged protection” – but this is something we’re not so sure about. The fabric looks great and feels lovely on the hand, but it doesn’t scream ‘durability’ to us and we can imagine it becoming frayed with hard use.

The speaker has passive radiators on the top and bottom (or both sides, depending on the orientation) that give a satisfying and pronounced wobble along with any bass line. These look fantastic, too.

Up top, around the rim, is a colourful LED ring. This can glow along to the music – which is a cool effect – but it’s functional too, as the ring displays the volume level, battery charge level and even the progress during a firmware update. 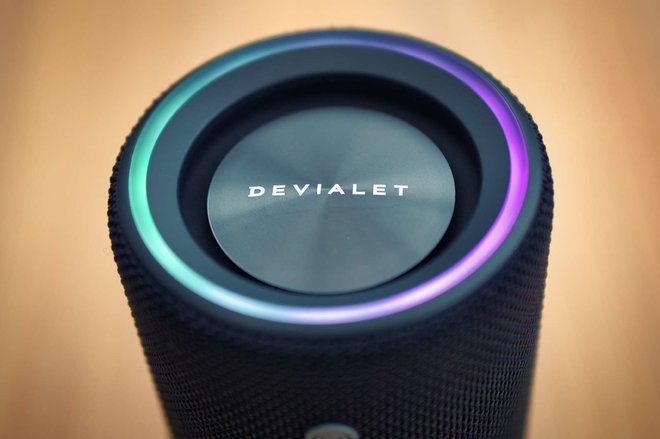 The Sound Joy features large rubberised volume control buttons that give a fairly satisfying click when pressed. The NFC chip is located by a small logo of the same rubbery material. A soft-touch plastic strip along the back of the device is home to the majority of the buttons and the speakers’ single USB-C port.

The buttons are backlit with white LEDs, making the speaker easy to use in low-light conditions. The same can’t be said for the volume controls, but their size and prominence mean you’ll be very unlikely to struggle with locating them.

If you have two Huawei Sound Joy speakers then they can be paired in stereo with a dedicated button, or by physically shaking the devices. We only had one speaker in for testing, so, unfortunately, weren’t able to try this out. It’s a nice idea though, especially that physical pairing action. 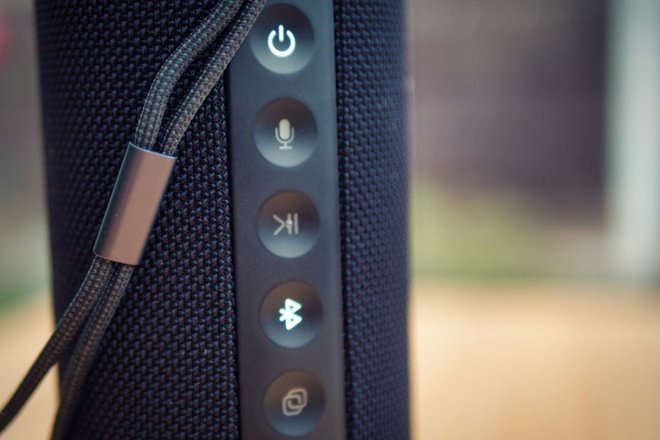 The speaker can be used in either horizontal or vertical orientation. It has tiny rubber feet that do a surprisingly good job of preventing it from rolling when placed on its side – even when there’s big bass thumping out.

When first turning on the Huawei Sound Joy, you are greeted with a chime followed by a deep bass sweep. We were immediately struck by the low-frequency capabilities of such a small speaker. This thing can really rumble. The passive radiators give a satisfying wobble too, the exaggerated movement being a treat to not only hear and feel – but look at too. 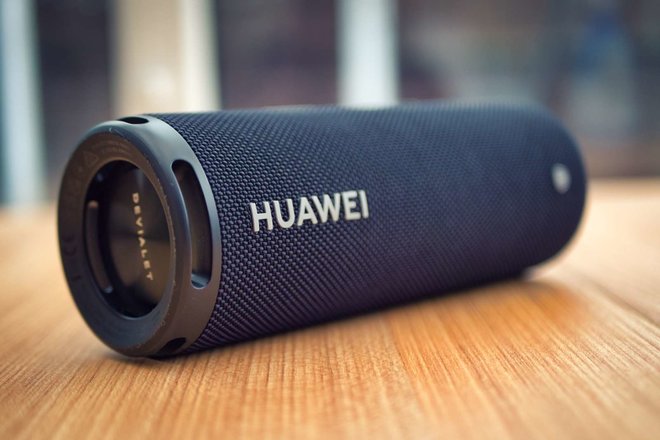 Pairing is incredibly easy thanks to automatic discovery. After turning the device on, our Windows 10 PC automatically pinged a notification that a nearby device was available for pairing and after one click we were ready to crank the tunes. The process was just as easy with our Google Pixel 5, which we just tapped on the NFC logo for instant switching.

The Sound Joy can be configured in Huawei’s AI Life app, this was relatively easy on the Pixel but involved some unusual side-loading malarkey. Essentially, you download the app as normal from the Play Store – but when you open it the app requires an update in the form of a separate app from Huawei’s servers. It’s nothing difficult but adds an extra layer of faff that you won’t find from competitors.

Unfortunately, iPhone users are out of luck and have no supported app. It’s not the end of the world as there’s not a huge amount going on in the app, but it does mean that Apple users won’t get to enjoy the full functionality of the speaker’s LED ring – as the music reactive lighting effects are disabled by default. 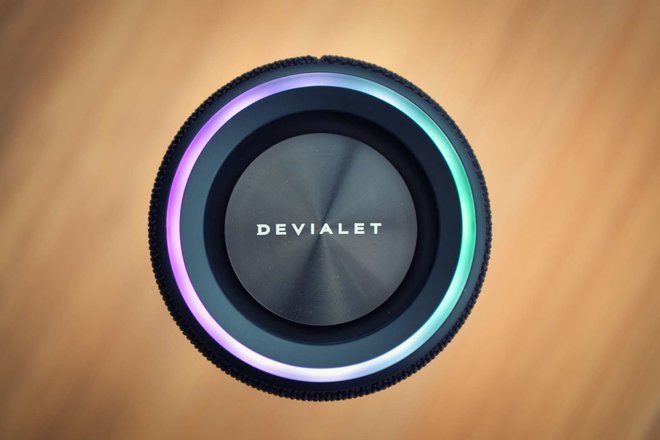 The Huawei Sound Joy has a very pleasing sound signature that sounds like it should be coming from a speaker twice the size. There is a bias toward the low-end, giving a warm punchy sound whilst retaining lots of detail in the highs.

Interestingly, we found that at very high volumes the vocals became unpleasantly sharp, but at normal listening volumes they sound just great. So don’t crank that dial too hard, otherwise things can become shrill.

We also noticed that the surface the speaker is placed on has quite a pronounced effect on the audio quality, especially when used in a vertical orientation. This is probably due to the downward-firing passive radiator and how bass will then resonate from surrounding surfaces. We found the sound to be most pleasing on a dense surface like a kitchen countertop. 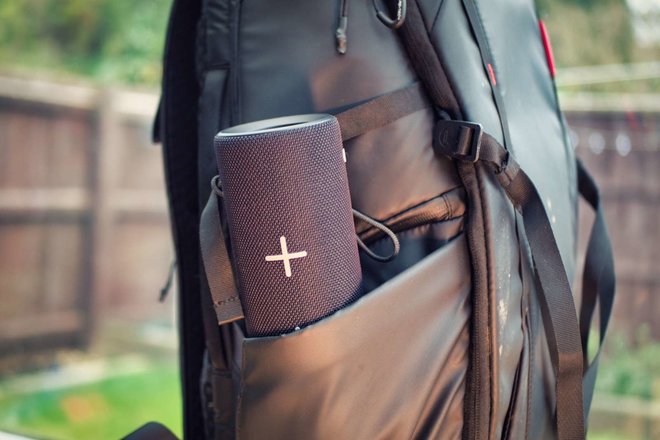 This thing can get absurdly loud too, so it’s an ideal companion for outdoor gatherings or a day at the beach. At home, you’ll rarely find yourself going past that halfway mark on the volume dial.

Battery life is great too, thanks to its built-in 8800mAh cell. Huawei advertises up to 26 hours of playback – and that seems pretty accurate in our experience. The Sound Joy supports fast-charging too, so with the right charger you can get an hour of playback from just a 10-minute charge (note: there’s no plug included in the box, just the cable).