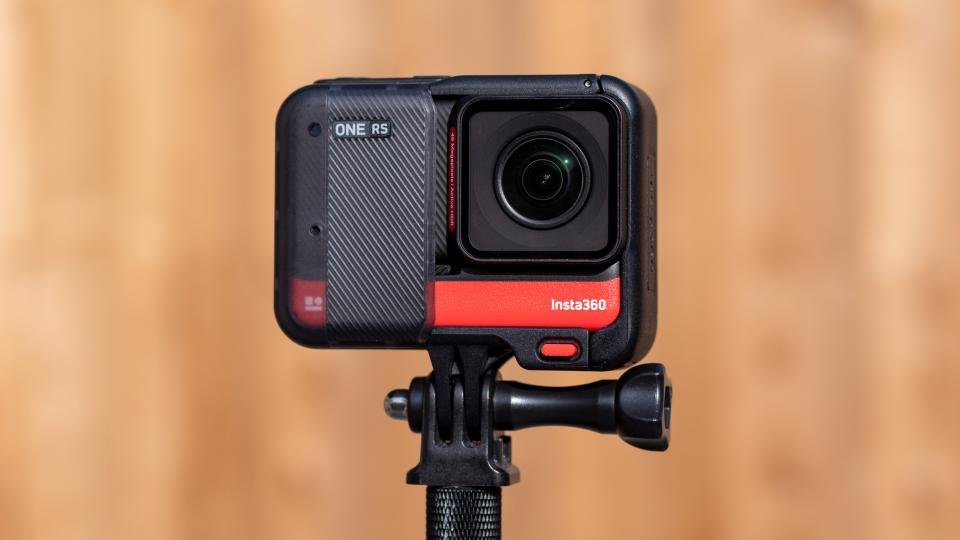 The Insta360 One RS is a big upgrade on its predecessor and a lot of fun, but isn’t the last word in image quality

When the Insta360 One RS’ predecessor appeared back in January 2020, I was instantly impressed with the concept. Its modular design allowed for it to switch between a regular 4K action camera and 360 camera, removing the need to buy two separate devices.

This new model takes that recipe and refines it significantly, improving the overall design and the performance of the camera’s “core module” and its 4K lens ‘mod’ with better image and audio quality and improved video stabilisation.

Insta360 review: What do you get for the money?

As before, all of these clip securely together – a bit like action-camera Lego – and slide into a cage, which has two mounting prongs on its underside. This allows the camera to be attached anywhere a GoPro-style mount will fit: your helmet, bicycle handlebars or surfboard, for instance. 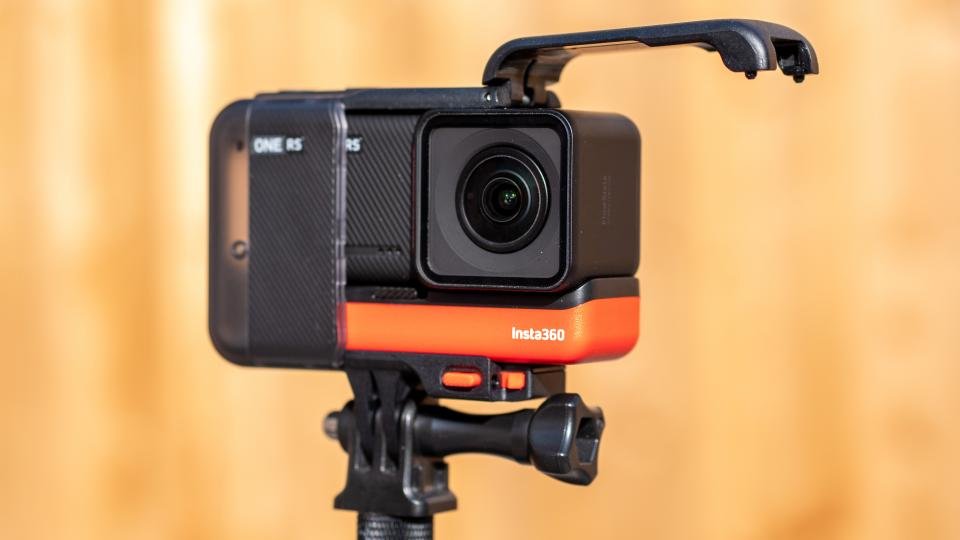 The entire unit is IPX8 water resistant (to 16ft or 4.88m), and, impressively, the new camera core is also backwards compatible with previous lens mods. So, if you bought the twin kit back in 2020 but fancy upgrading, you only need to purchase the 4K kit, since your old 360 lens will still work. Likewise, the new core will work with the 1-in mod.

So, what’s actually new? Well, the most obvious upgrade is to the mounting cage, which is much neater and easier to handle than before. Once you’ve assembled the camera, it slides into the cage sideways and the end hinges down and latches closed. To release it, simply press a pair of buttons on either side and the camera slides back out.

This is a huge improvement. The old cage felt flimsy and left the shutter and power buttons awkwardly recessed. The new one feels more robust, grips the camera firmly and securely and the buttons are much easier to reach as well. 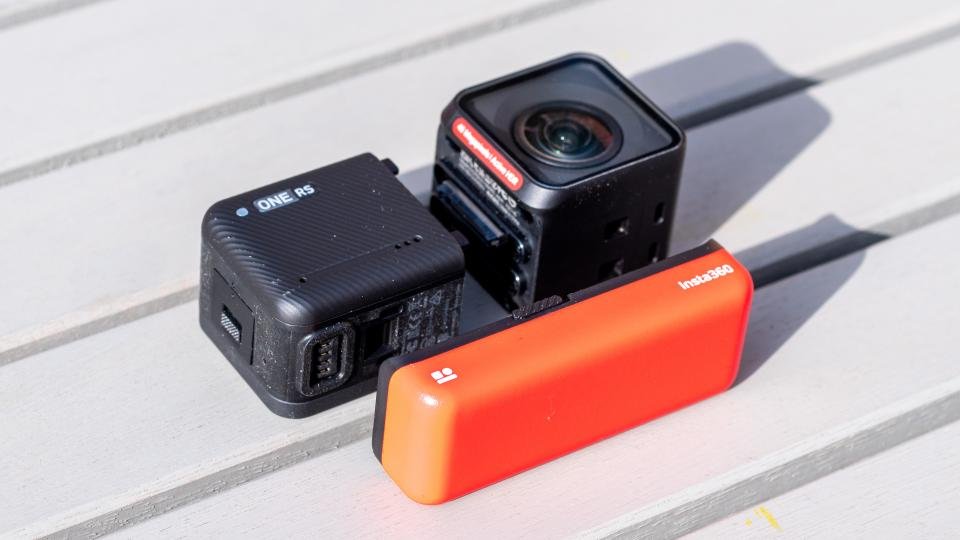 Other key improvements include an additional microphone on the core unit, bringing the total count to three, a bigger battery with 21% more capacity, plus the ability to add Insta360’s proprietary FlowState in the camera. A recent update means the Insta360 One R can also do this, but it only offers one level of stabilisation in-camera where the RS offers three: low, medium and high.

There’s more, too. The new 4K Boost Lens comes with a larger 1/2in, 48MP sensor and the ability to record video up to 6K in resolution. There’s improved Wi-Fi as well, so clips transfer to your phone faster than before. 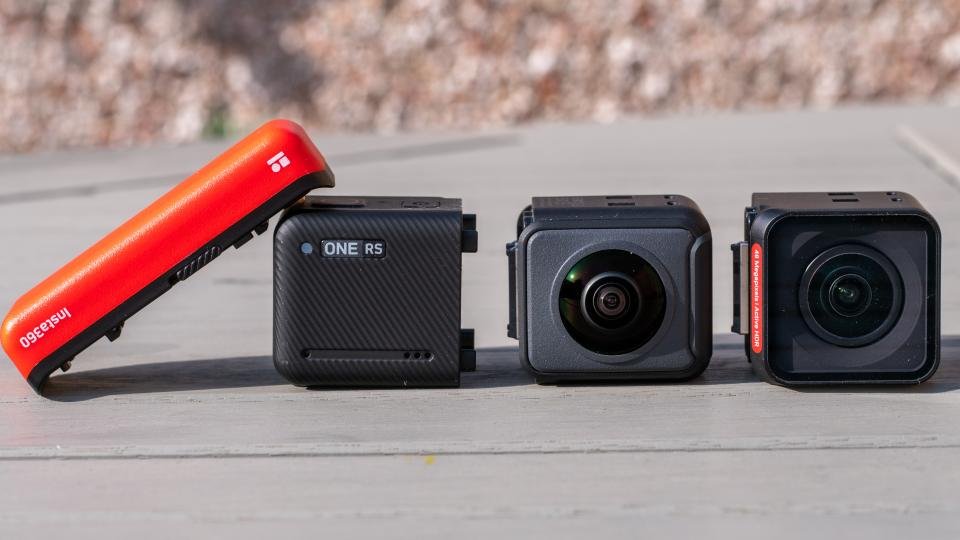 You also get the option to add 45-degree and 360-degree horizon-levelling to all lens mods. This isn’t applied in-camera like FlowState stabilisation can be – you need to pull footage into the mobile or desktop apps first and then process them in post – but it’s an improvement over what’s on offer from the GoPro Hero 10 Black, which only offers 45-degree levelling as standard, albeit in-camera. Unfortunately, to get full 360-degree horizon levelling, you’ll have to purchase the Max Lens mod at an extra cost of £90.

Obviously, the main appeal of the Insta360 One RS is that it’s modular and you only need one system to capture regular flat and 360-degree imagery. You pay a bit of a premium for it, but the twin lens kit is far cheaper than buying, say, a Hero10 Black and GoPro Max together at around £900.

And you don’t have to sacrifice that much when it comes to overall image quality and features, either. Both the new 4K Boost Lens and the 360-degree lens produce crisp, vivid footage and the microphone is decent, too. The former is a big upgrade in image quality terms over the One R, producing cleaner, brighter and sharper footage.

As for video formats, there’s the usual proliferation of confusing options to choose from. But the headlines are that you can record at up to 60fps in 4K resolution or up to 30fps in 6K (6,016 x 2,560), while the 360 lens records at up to 5.7k at 30fps. As with most other 360 action cameras, you can output your captured footage in full 360-degrees (though you’ll need a compatible player to view the files) or “reframe” it and output at 1080p. Both of the lenses record at a video bit rate of up to 100Mbits/sec, which is on a par with GoPro’s highest bit rates.

Those aren’t the only modes you have available to you, however. A quick swipe through the menu system reveals a whole swathe of others to play around with. For video recording you have Active HDR, timelapse, TimeShift (hyperlapse), slow motion, loop recording and starlapse, while for photography you have burst, interval capture, night, and HDR. Photos can also be captured in DNG raw format for editing in Lightroom or similar software. 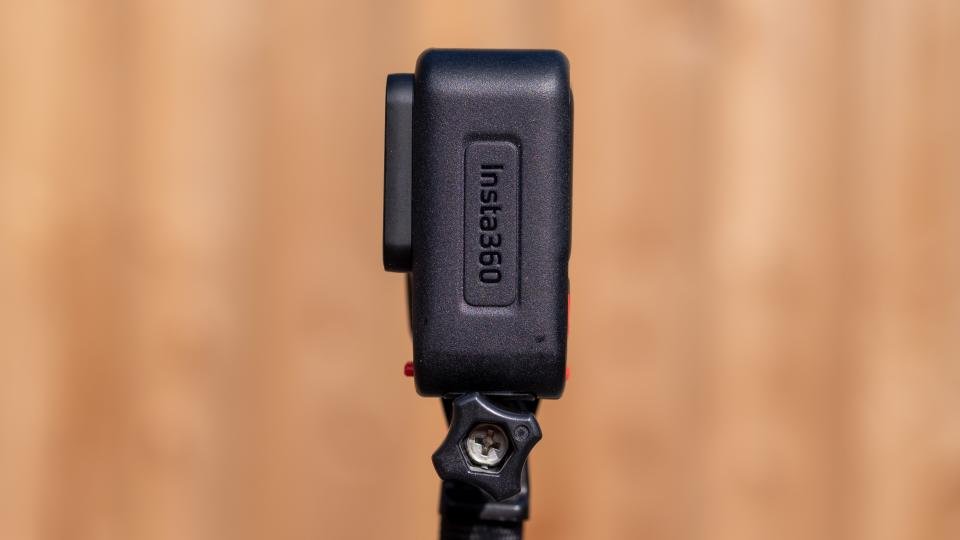 You have three different colour modes to choose from – vivid, standard and log for professional grading in post – three different levels of in-camera stabilisation, and you can even pair your AirPods with the camera to monitor audio levels and use your voice to start and stop recording.

And battery life is decent, matching the GoPro Hero10 Black at 76 minutes while shooting 4K 60fps footage. Finally, I haven’t, so far, experienced any of the instability or performance issues with the One RS at launch as I did with the One R a couple of years back. Insta360 has clearly learned its lesson on that front; the One RS already feels pretty sorted.

READ NEXT: These are the best action cameras to buy today

Insta360 One RS: What could it do better?

There are some caveats, however, and the most obvious one is that the One RS can’t quite match the GoPro Hero10 for either image or audio quality. Footage from the GoPro Hero10 Black looks cleaner and less grainy and the stabilisation performs better in low light.

Plus, the One RS simply isn’t as capable when it comes to recording modes. It might be able to hit 6K resolution at 25fps and 4K at 60fps, but the GoPro can do 5.3K at 60fps and 4K at 120fps. And while you can apply flowstate stabilisation to the One RS’ 6K footage in post this isn’t as effective as GoPro’s Hypersmooth 4.0 is on its 5.3K footage.

There are other shortcomings, too, and the first is the app’s inability to apply horizon levelling to clips that have been stabilised in-camera. If you think you might want to level any of your clips, make sure you use the camera’s “Post” stabilisation mode when capturing the clips.

Insta360 One RS review: Should you buy one?

Despite the niggles, the Insta360 One RS is a significant upgrade on its predecessor, combining plenty of new features and improved image quality with a redesign that genuinely improves usability.

If you want the ultimate in image quality, the GoPro Hero10 Black is still king of the hill but, if you fancy trying out 360 recording and don’t want to spend big on a whole camera dedicated to the format, the Insta360 One RS has a lot going for it.