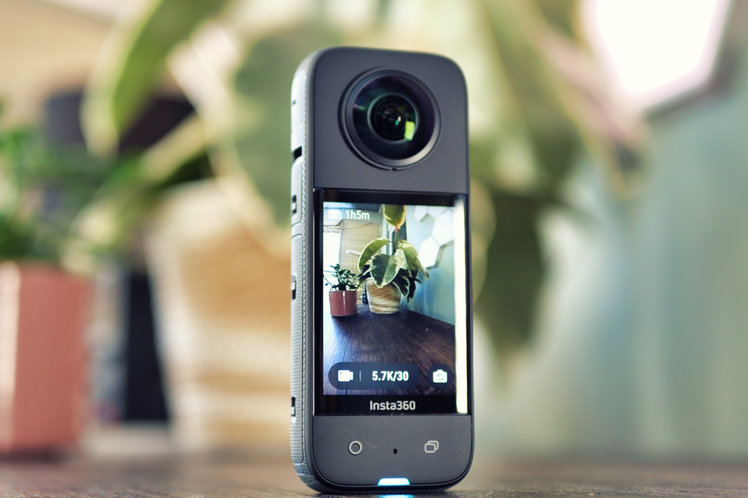 Insta360 has had a busy year, introducing multiple modular options to its One RS family as well as the Link webcam, which surprised us recently. Now, though, it’s time for one of its most popular 360 cameras to get an update.

The Insta360 X3 is the successor to the best-selling One X2, but, for this model, the company has decided to change things up and remove “One” from the branding. It makes sense, considering the brand’s modular offerings also fall under the One moniker, maybe going forward it will refer to those modular devices exclusively.

Despite the name change, the camera’s heritage is plain to see, and it retains the same practical candy bar form factor as previous generations. Elsewhere, there are plenty of changes to be found, so, let’s take a look and see what the latest 360 camera brings to the table.

The most immediately noticeable change is the presence of a sizable touchscreen display, which replaces the circular display seen on the One X2. While the quirky circular display certainly had some charm, this more traditional rectangular display is infinitely easier to use. 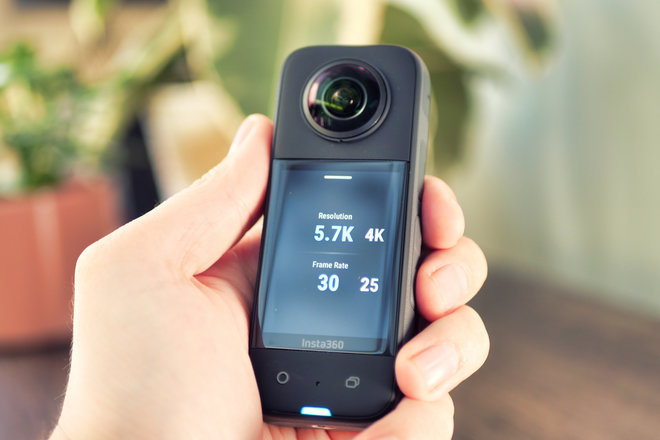 This new screen gives the device a somewhat nostalgic look that reminds us of the chunky phones of the early 2000s. Of course, the bulbous lenses protruding on either side quickly dispel that illusion, as does the rear of the device, which very much resembles its predecessor.

The Insta360 X3 has four buttons, two on the side and two underneath the display. On the side, there’s a power button and a quick menu button. The quick menu allows you to access custom preset modes and is an excellent way to quickly switch between your favourite shooting options. Under the display is a record button and a lens selection button. Tapping the lens button switches between full 360 capture and single lens capture on either the outer or inner camera.

There’s a tripod thread on the base which allows for compatibility with a huge range of accessories, and it can also be easily adapted to work with GoPro-style mounts. On the opposite side to the buttons, you’ll find a water-sealed flap that protects the USB-C port, along with a removable 1800mAh battery that fills a significant portion of the camera’s frame. 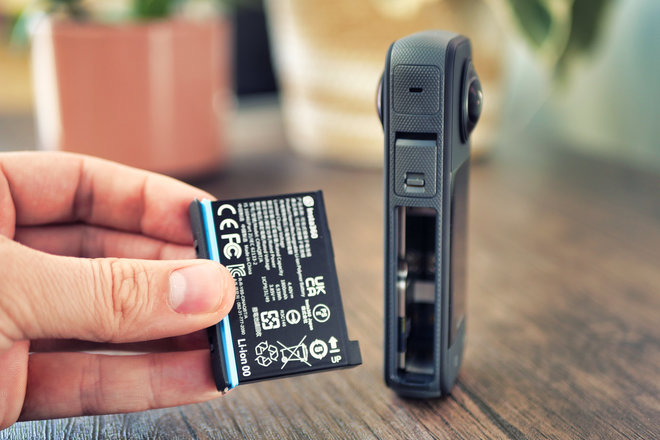 To access the microSD card slot, you first have to remove the battery, which is a little odd. In practice, though, it’s a fairly quick and easy process. The only downside to this design is that you definitely won’t be hot-swapping cards, you’ll need to power down the camera before the process.

The Insta360 X3 uses the same excellent software as its other cameras, and we think it’s a strong selling point for all of the brand’s offerings. It’s easy enough for just about anyone to get to grips with, so long as they have a sufficiently powerful phone or computer. If you’re on the more advanced end of the spectrum, Insta360’s plugin for Adobe Premiere Pro allows you to edit straight in the NLE. 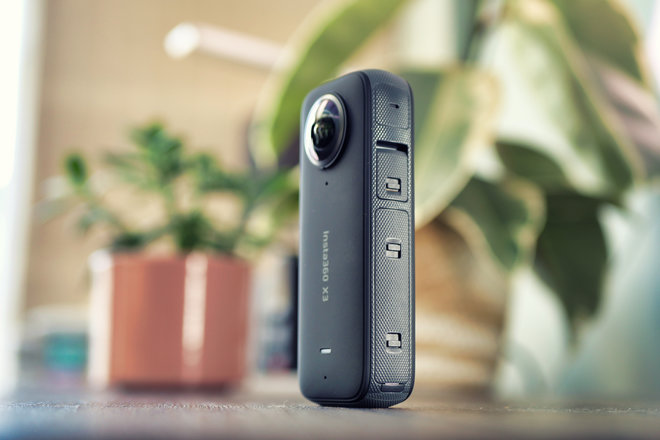 Just as we found with the Insta360 One RS, AI features like DeepTrack take lots of the hassle out of reframing your videos. Plus, you can create some epic effects by using one of Insta360’s ShotLab templates, which offer everything from smooth-flowing hyper-lapse creations to trippy cloning and mirroring effects.

New on the X3 is something called Me Mode, this allows you to create an invisible selfie stick video that’s automatically saved as a video file, rather than having to reframe a 360 video to get the same effect. It’s a clever way of utilising both lenses while shooting in a traditional video format, but you do have to be careful with the framing. We can imagine it being useful if you’re in a hurry, or low on storage space, but for the majority of cases, we were better served by the flexibility that real 360 video offers. 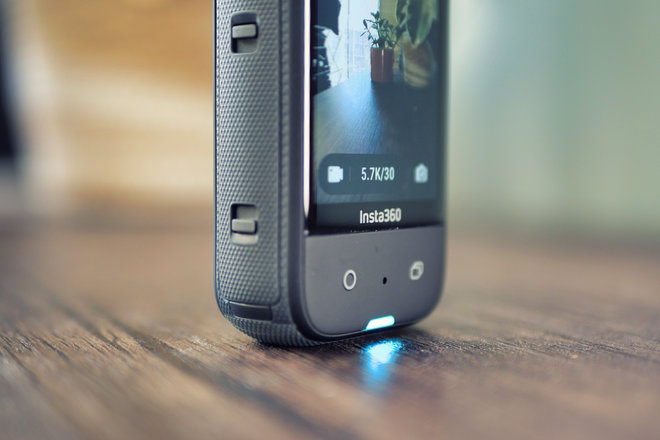 The biggest difference in image quality comes from the new 1/2-inch sensor, which is slightly larger than the 1/2.3-inch sensor used in the One RS, One X2 and GoPro Max. We would have liked to see a resolution increase, as the X3 still offers 5.7K 360 recording, and that means reframed output maxes out at 1080p. 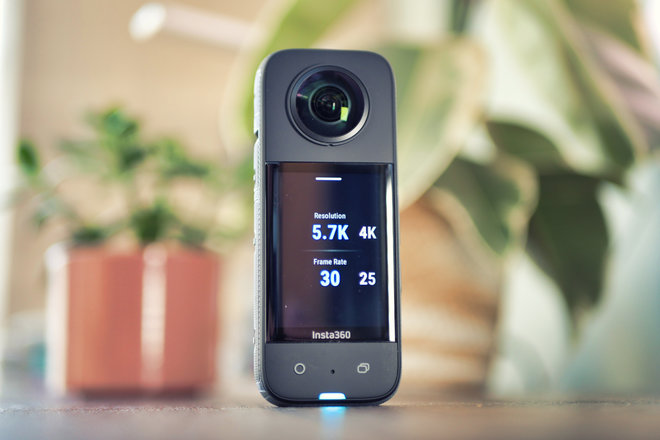 We’ve been stuck at this resolution for years with consumer-grade 360 cams, and it has us wondering who will be the first manufacturer to bump it up. Of course, higher resolutions will also make editing more challenging, so this might just be the sweet spot, for now.

Unfortunately, we didn’t have the One X2 on hand for direct comparison, but we were able to test the X3 alongside the One RS, which has almost identical specs.

In daylight, both cameras perform well, there are differences in the image but it’s hard to definitively say that one is better than the other. We found that the X3 offered slightly more dynamic range, but it also seemed to suffer from more graininess in dark areas. The One RS has more vivid colours, particularly the greens, whereas the X3 looked more natural with a tendency toward warmer tones. Stitching is much better with the X3, thanks to its narrower chassis.

When it comes to still images and timelapses, the X3 is miles ahead. We tend to shoot more video with 360 cameras, so it isn’t our highest priority, but if you’re a real estate photographer, for example, the jump to 72MP will be invaluable. The same goes for frequent timelapse shooters, who will benefit greatly from the added resolution when it comes to reframing.

There’s a new 360 Active HDR video mode which is a definite improvement on the HDR video mode offered by the One RS. However, it didn’t add as much dynamic range as we were hoping and looks a lot less natural than the standard video modes. In certain lighting conditions, we can imagine it being useful, but we wouldn’t use it as our primary shooting mode.

We tested the cameras side-by-side in extremely low-light conditions, and it was here that the new sensor revealed some of its magic. The video from the X3 was more detailed throughout the scene, produced more accurate colours and captured highlights well. Conversely, the One RS blew out the highlights completely and the rest of the image was severely muddied.