Intel’s 10th Generation Xeon W-10885M flagship processor for mobile workstation platforms has once again been spotted along with its specifications and benchmarks. The CPU was last spotted back in March but the latest leak from Rogame unveils the full specs of Intel’s 10th Gen Xeon W family.

Intel is planning to launch a range of 10th Gen Xeon W SKUs in its 10th Gen Comet Lake family. So far, we have received information about the flagship Xeon W-10885M and the Xeon W-10855M. The processors will feature a range of workstation enhancements such as support for ECC Memory, the Intel vPro Platform Eligibility, Intel Stable Image Platform Program, and Intel Trusted Execution tech. Some of these features are essential from mobile-based workstation platforms and that’s where the Xeon lineup comes in.

The Intel Xeon W-10885M will feature 8 cores and 16 threads. The base clock is reported at 2.4 GHz while the boost clock is reported at 5.3 GHz. The CPU will feature 16 MB of L3 cache and is likely to retain the 45W (cTDP-up 65W) of its Core i9 (10980HK) brother. Since the specs of both Intel Xeon & Core CPUs are pretty much the same, we should also expect similar performance. 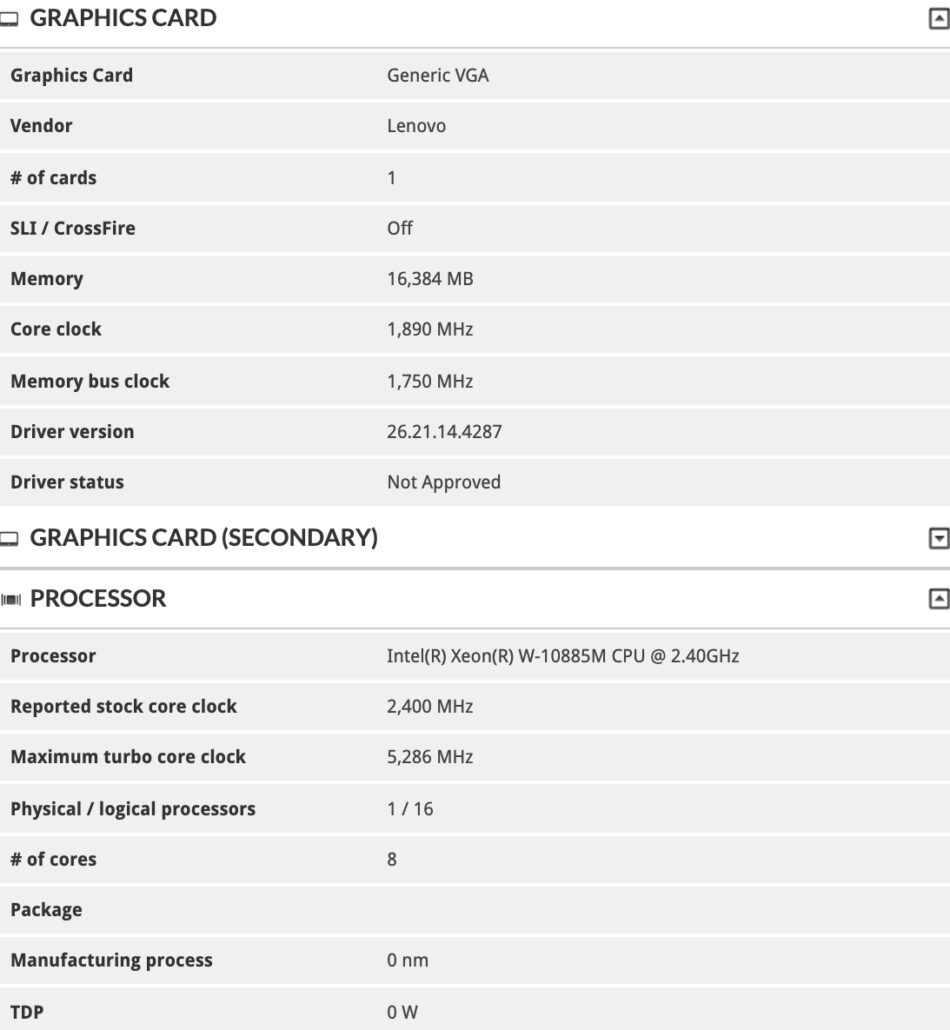 The other part is the Xeon W-10855M which features 12 MB of cache, hence confirming that it is a 6 core and 12 thread chip. This CPU comes with a boost clock of up to 5.1 GHz which should also be similar to its Core-based i7-10750H sibling and will also feature a 45W TDP design.

Coming to the benchmarks, the CPU scores 21,687 points in the 3DMark Firestrike Physics and 9145 points in the 3DMark Time Spy CPU tests. These results put the Intel Xeon W-10885M as slightly faster than the AMD Ryzen 9 4900HS which is AMD’s flagship Renoir mobility processor. Now in terms of competition, the Intel Xeon W mobility chips face no threat from AMD considering that Ryzen Pro series doesn’t currently have high-performance options or ECC memory support.

The Intel Xeon W mobility lineup is additionally coupled with NVIDIA’s Quadro RTX discrete graphics cards which make them a more compelling option for workstation users who are always on the go. NVIDIA’s Quadro RTX Mobile GPUs scale all the way up to the TU102 SKU and feature up to 24 GB of GDDR6 memory, making them the perfect solution for the fastest mobile workstation platforms.

Once again, expect a range of solutions from top OEM vendors such as Dell, HP, Lenovo featuring Intel’s Xeon W ‘Comet Lake’ Mobility CPUs alongside powerful NVIDIA Quadro RTX discrete mobile graphics cards, making the laptops some of the powerful configurations for workstation users to be available this year.