for this first generation, would officially compete with the 6700 XT from AMD and RTX 3070 from Nvidia.

Coming straight from the leaker greymon55, slides concerning the Alchesmist graphics cards of Intel would be in the nature and would come to confirm the performances of the cards compared to AMD and Nvidia (the 6700 XT and the RTX 3070).

According to the slide, a GPU model Alchemist with a TDP of 175-225W would compete directly with the RX 6700 XT from AMD and the RTX 3070 from Nvidia. This would strongly resemble a card with 32 Xe cores (or 512 EU), the most powerful version of this generation.

Performances that correspond to the old rumors that there were in the last months. Intel would come with a GPU competitive on the mid-range, both in terms of performance and consumption in view of its TDP.

A mobile Alchemist GPU with 32 Xe-core on Geekbench

After the graphics cards desktopgraphics cards, there are of course the mobile graphics cards, which should have the same number of Xe-core as their variants desktop while the competition does not use its best chips (Navi 22 for AMD and GA104 for Nvidia).

It is the turn of a mobile GPU Alchemist mobile GPU to show itself on Geekbench in test on a Tiger Lake platform. 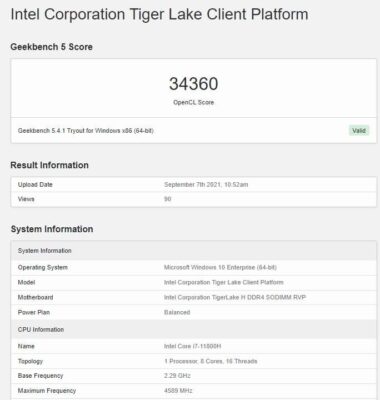 Unfortunately, these scores cannot indicate reliable performance against the competition at the moment, as it is slower on this test than an RX 570.