Today Intel is announcing updates to most of their SSD product lines. Their products based on 3D NAND are being updated to use Intel’s 144-layer QLC and TLC NAND. On the Optane side of the business, we have detailed specifications for the first product to use second-generation 3D XPoint memory, and an updated Optane Memory caching solution for client PCs. Intel has also revealed the code name for their third-generation Optane persistent memory modules, which will be launching along Sapphire Rapids Xeon processors.

Some of these products have already started shipping and are officially launching this month, while others are merely being announced today and will be launching in 2021, with full specifications and pricing disclosed closer to launch. 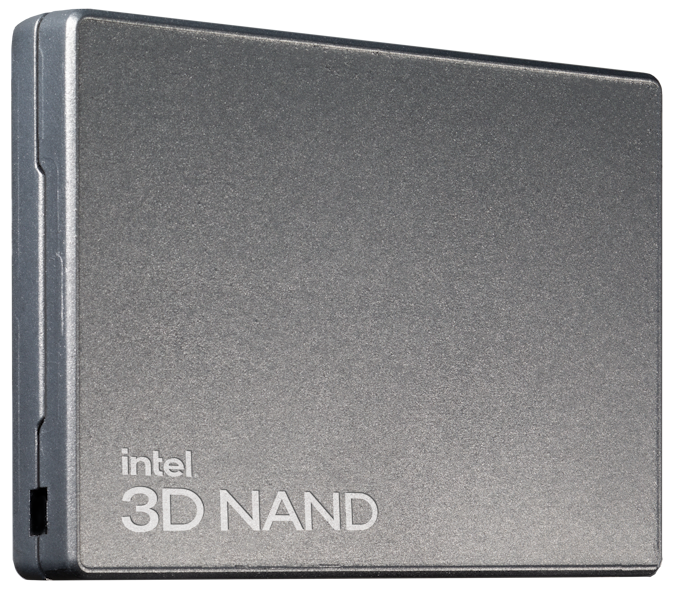 The first two SSD announcements are updates to Intel’s datacenter SSDs using 3D NAND. The new D7-P5510 uses 144L 3D TLC NAND and is the successor to the D7-P5500 which uses 96L TLC. Since the P5500 was an OEM-only product rather than widely distributed through the channel, the P5510 will also serve as the successor to the P4510 for the portion of the customer base. Intel has not announced a 144L replacement for the D7-P5600, the higher-overprovisioning counterpart to the P5500. 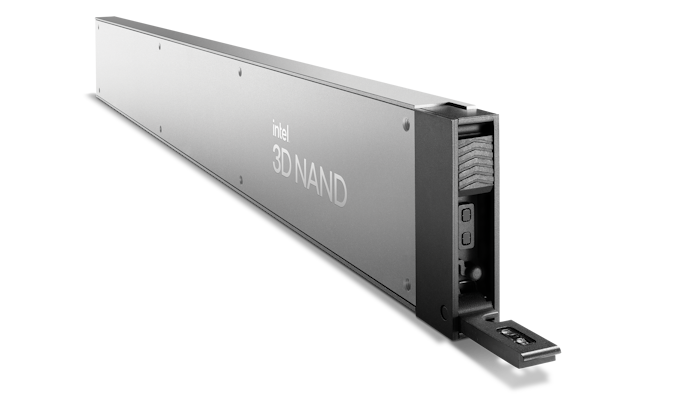 Using Intel’s 144L QLC NAND is the new D5-P5316 SSDs in 15.36 TB and 30.72 TB capacities in either U.2 or E1.L form factors. The E1.L version allows Intel to achieve the original goal of the “Ruler” form factor by enabling 1PB of storage in a 1U server. Since the P5316 is replacing the older P4326 (64L QLC and PCIe gen3), it’s a much more substantial upgrade over its predecessor than the TLC-based P5510 is. Aside from the introduction of Intel’s third-generation enterprise NVMe SSD controller to their QLC product line, the most important change the P5316 brings is a major shift in how the Flash Translation Layer works. The P5316 enables a 16x reduction in DRAM by changing the SSD’s Flash Translation Layer to work with a granularity of 64kB rather than 4kB. We’ve seen a few other enterprise SSDs make this kind of change, such as Western Digital’s Ultrastar DC SN340, which uses a 32kB FTL granularity. The DRAM savings of a more coarse-grained FTL help make high-capacity SSDs more affordable, but at the expense of severely harming performance and increasing write amplification for small block size random writes. The general trend in the industry is to adopt NVMe Zoned Namespaces for such drives, preventing random writes entirely rather than relying on host software to be careful about issuing small-block IOs. However, Intel doesn’t seem to be ready to adopt this approach yet.

Both the TLC-based P5510 and QLC-based P5316 use the same controller platform as Intel’s other P5000-series SSDs announced earlier this year. Those drives introduced Intel’s third-generation enterprise NVMe SSD controller, their first supporting PCIe 4.0. The new 144L drives don’t really push performance or feature set any further, but will be more widely available and should be cheaper than the 96L drives. The TLC-based P5510 has already been sampled to customers for qualification and will be shipping for revenue by the end of this year. The QLC-based P5316 is sampling and will be available in the first half of 2021.

Moving on to the consumer SSD business, Intel will be introducing the 670p QLC NVMe SSD in the first quarter of 2021. This follows in the footsteps of the 660p and 665p with another update to newer 3D QLC NAND, and also brings a SSD controller update to this product line. However, it is still only a PCIe gen3 product. Intel will be reintroducing the 512GB capacity that was missing from the 665p, but they are not yet adding capacities beyond 2TB. Detailed performance specs and pricing will be shared closer to the 670p’s launch.

Intel is making an adjustment to the dynamically-sized SLC caching behavior with the new 670p. While the maximum and minimum SLC cache sizes are not changing, Intel has managed to improve the cache size that will be available for a partially-filled drive: A half-full 670p will still have almost the maximum SLC cache size available, and the minimum cache size will not be reached until the drive is over 85% full. This probably won’t change anything for simple benchmarks that write continuously until the cache runs out and performance drops, but it will help real-world usage where writes come in bursts. 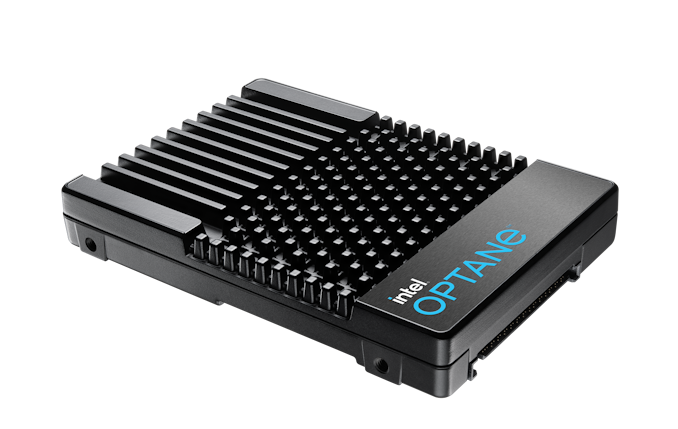 Intel’s long-awaited second-generation Optane enterprise SSD, codenamed Alder Stream, is finally shipping as the P5800X. This is the first product to use second-generation 3D XPoint memory, and it also features an updated controller to support PCIe 4.0. The P5800X pushes the limits of the performance available from a PCIe 4.0 x4 interface with sequential reads, random reads and random writes all supported at more or less line speed, and sequential writes only a bit slower at 6.2 GB/s. And while 1.5M IOPS for either random reads or random writes is already very impressive, the P5800X can even hit 1.8M IOPS on a 70/30 mix—only possible because PCIe is a full-duplex interface. Intel has also made optimizations for single-sector 512-byte random reads, which can hit 4.6M IOPS. (Flash-based SSDs are usually not able to offer any higher IOPS for 512B reads than 4kB reads, and many actually have substantially lower performance for small block IO.) 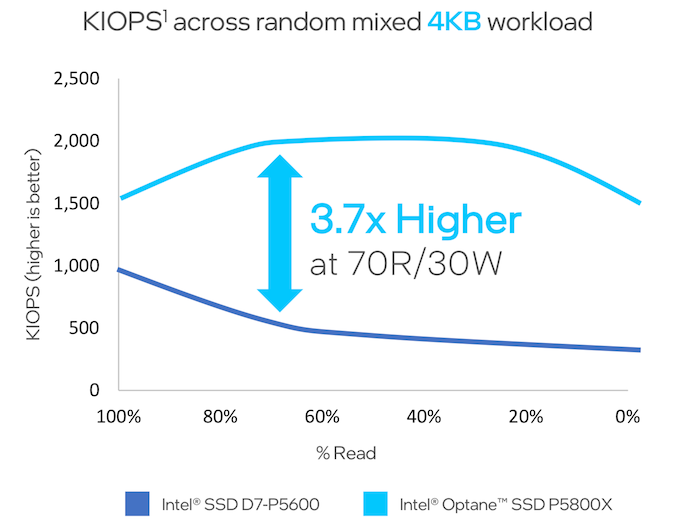 The client/consumer focused portion of Intel’s Optane product family has shrunk considerably. They’re no longer doing Optane M.2 SSDs for use as primary storage or cache drives, and there’s been no mention yet of an enthusiast-oriented derivative of the P5800X to replace the Optane SSD 900P and 905P (though if Intel plans such a product, they are unlikely to announce it until they have delivered a desktop platform supporting PCIe 4.0). The only client Optane product Intel has been talking about lately is the Optane Memory H10 hybrid drive consisting of a QLC NVMe SSD and an Optane SSD on the same M.2 card. A successor is now on the way: the Optane Memory H20 is planned for Q2 2021, incorporating updates on the QLC side that likely mirror the 670p’s updates, and a new controller on the Optane half of the drive. The H20 will still be a PCIe gen3 solution, so we will probably continue to see performance of the NAND side constrained by only having access to two of the four PCIe lanes. Intel is also bumping up the platform requirements: an 11th-generation Core U-series mobile processor and 500-series chipset, and Intel RST driver version 18.1 or later. When the H10 launched, Intel had laid the groundwork for support on their desktop platforms, but this effort was dropped when the H10 became an OEM-only product. The H20 is a mobile-focused OEM-only part from the outset, so the platform compatibility requirements aren’t as much of an issue as they would be for a retail SSD.

The Optane Memory H20 will be available with 512GB or 1TB of QLC NAND flash memory, each paired with 32GB of 3D XPoint memory.

Intel’s Optane Persistent Memory products (3D XPoint in a DIMM form factor) are currently on the second generation 200 series Barlow Pass supported by Cooper Lake and upcoming Ice Lake Xeon platforms. The 200 series Optane Persistent Memory modules still use first-generation 3D XPoint memory. Intel has now disclosed that the next generation on the roadmap is codenamed Crow Pass, which will likely be branded as the 300 series. The Crow Pass modules will be launched for use with Intel’s Sapphire Rapids Xeon processors. Those are expected to use DDR5 memory, so Crow Pass will be a major update to the interface for Optane Persistent Memory. Crow Pass should also bring second-generation 3D XPoint memory to the DIMM form factor, so altogether this is likely to be a much more significant update than the relatively minor improvements brought by the 200 series. 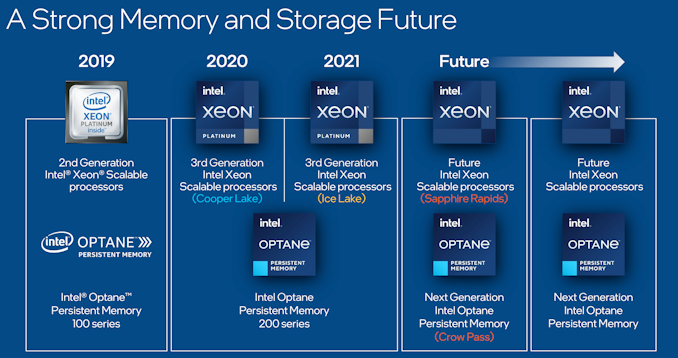