The next NUC from Intel with Alder Lake and DG2

Shared on the Chinese social network Weibo (via 9550pro), a slide of the upcoming 12th generation NUC for Enthusiast has been shared with all the information about the PC. 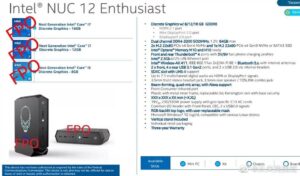 This 12th generation as indicated, will use the Alder Lake hybrid processors with 2 i7 processors and one i5 and will be coupled with discrete graphics cards (presumably DG2) featuring 8GB of vram up to 16GB.

The Enthusiast version will use up to 64GB of DDR4-3200 in dual channel and PCIE 4.0 support for two M2 SSDs, thus potentially leaving DDR5 and PCIE 5.0 support for a future NUC 12 Extreme.

Furthermore, this NUC will use the latest standards, such as Wi-Fi 6E and Thunderbolt 4. Unfortunately, the most important information about this product, namely the size and volume of the computer, is not available, but the shape would indicate a compact format in line with previous generations.

No date or price has been mentioned, but with the release of the Alder Lake processors for the end of the year, the release of its NUCs could come quickly after (CES?).