A tech publication on Facebook (ITCooker via Videocardz) has leaked the first testing of an Intel PCIe 4.0 bus. The platform being tested is the upcoming Intel Rocket Lake which is scheduled for release in 2021. PCIe 4.0 SSDs are going to provide a significant uplift in storage performance and will likely be necessary for games that feature asset streaming. The benchmark itself was done using Seagate’s FireCuda PCIE 4.0 drive and an 11th gen CPU coupled with a Z490 motherboard.

Intel Rocket Lake S gets tested with a PCIe 4.0 NVME SSD drive and an RX 5700 XT

The leak appears to stem from Taiwan and they claimed they had access to a “next-generation” CPU which they tested on a Z490 motherboard. Considering the only next-generation CPU that will work with a Z490 is Rocket Lake, its not really hard to guess what they used. The screenshots provided show that CPUZ is not able to properly read the samples which means they were likely using early Engineering Samples. Since Rocket Lake S fits just fine on the LGA 1200 socket, customers with Z490 motherboards will have a clear upgrade path when the SKUs land in 2021. 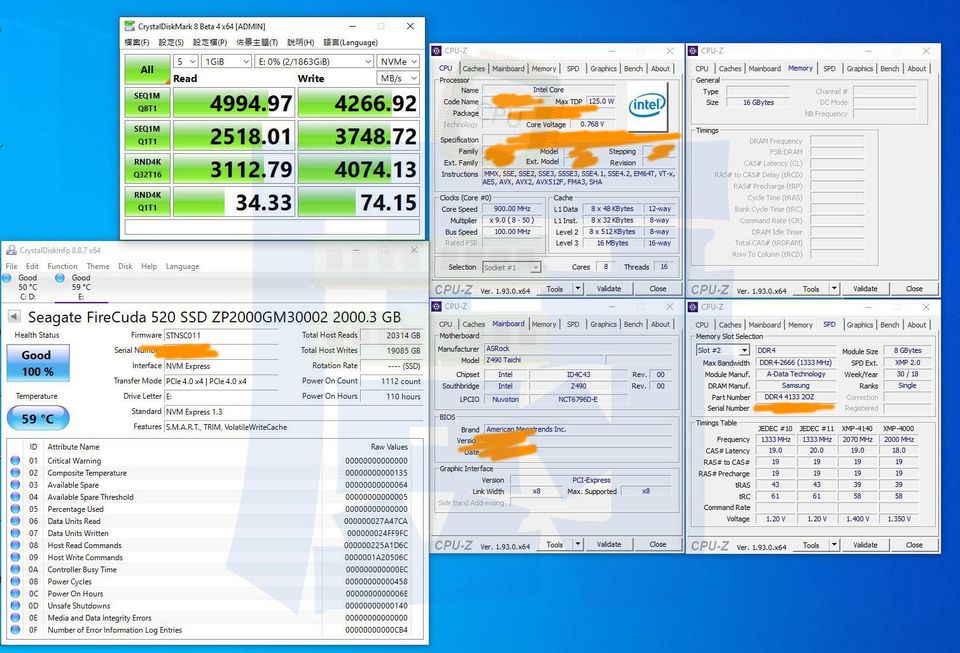 The CrystalDiskMark shown had a ready speed of 5GB/s and a write speed of 4.2 GB/s (sequential) which is only possible on a PCIe 4.0 bus. This also means that you are going to see storage devices that greatly exceed this (for cheap) very soon and just in time for the next-gen console launch. Coupled with tech like RTX IO, blazing fast SSDs are going to be a major upgrade point for consumers. The RX 5700 XT GPU was stress tested with Furmark and GPUz shoed PCIe 4.0 active in x16 mode as well.

RKL-S is based on the 14nm process, but unlike older generations, it will feature a revamped architecture (Willow Cove), PCIe 4.0 support and Xe graphics. Think of it as a backport of the advanced architecture reserved for 10nm to 14nm so the company can maximally utilize its foundry capacity. Since it is based on the 14nm process, a leaked benchmark (Geekbench via _rogame) indicates that it will be able to boost up to 5.0 GHz (which is typical for the highly mature process right now) allowing for a best of both worlds situation where a new architecture is able to hit the ground running (speaking from a clock speed perspective) because of the highly mature node.

Backporting is a usually a double-edged sword because if 10nm isn’t able to sufficiently compete in terms of power efficiency gains, the loss in clock speed from shifting to the infant 10nm process (when it happens) could result in reduced performance from the bar that Rocket Lake is going to set when it launches. In the meantime, however, this is great news for enthusiasts because RKL is going to be the first major new architecture in a very long time. Early benchmarks of the platform were spotted over at Geekbench and they are expected to come to market sometime in late 2020 or possibly by early 2021.

A 5.0 GHz boost clock combined with a major new architecture should offer the best possible combination for a performance upgrade for Intel customers (although at the cost of similar TDP) in a very long time and I am personally really excited to see how this performs. Backporting could also turn out to be Intel’s saving grace as it misstepped on 10nm and now again on 7nm. 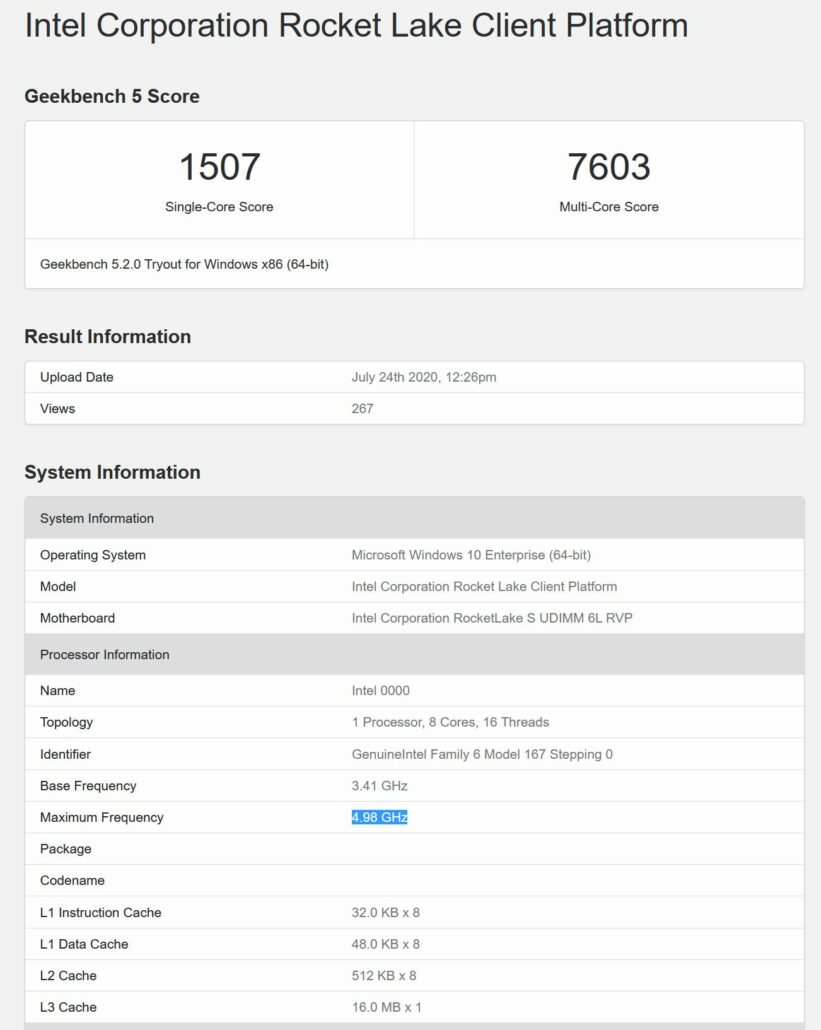 Rocket Lake-S will be housed on 500-series motherboards and will have features that are characteristic of a major architectural change. Willow Cove itself is going to result in massive IPC uplifts and considering this is based on the 14nm process – it will be able to sustain the high clock speeds that were the saving grace of Intel’s current generation of processors. The result is a platform that is significantly faster (think Nehalem to Sandy Bridge) than the generation it succeeds and could even put the hurt to its upcoming 10nm family if the clock rates don’t improve enough.

It features 12bit AV1, HEVC and E2E compression along with the new Xe graphics architecture – which should make pretty much all of these processors ship with entry-level gaming capability. New overclocking capabilities will also be included (Intel will want to boast its clocks if this is going to be the last generation on 14nm). PCIe 4.0 is also finally included along with increased DDR4 support natively. 20 total CPU PCIe 4.0 lanes are included with Intel Rocket Lake S although the chipset on the motherboard should add quite a few more. It is not confirmed at this point where the PCH PCIe lanes will be PCIe 4.0 as well.

Discrete Intel Thunderbolt 4 (USB4 compliant) is also included – which should also significant IO speedup (think faster-attached storage as well as external dGPU enclosures). All in all, this is shaping up to be a solid upgrade over Intel’s existing lineup. The only thing that might raise some eyebrows is the fact that Intel SGX security appears to have been removed. I am sure Intel must have had a very good reason to do this but in the wake of the tons of security vulnerabilities, the company has fallen prey to, all eyes of security enthusiasts and corporate clients will be on features like these.