The latest Intel Sapphire Rapids-SP Xeon CPU with 56 Golden Cove cores has been unearthed by Yuuki_ans. This chip is still an engineering sample but comes with much higher power numbers than the ones we have previously talked about.

Intel Sapphire Rapids-SP Xeon CPU with 56 cores has been spotted in the latest leak by Yuuki_ans.

As for the clock speeds, the Intel Sapphire Rapids-SP Xeon CPU was running at a base clock speed of 1.9 GHz and a boost clock speed of 3.3 GHz. The CPU has a maximum single-core boost clock of 3.7 GHz. The power figures are where things get insane as the processor running on the Socket E (LGA 4677) motherboard has a base TDP of 350W (PL1) and a maximum turbo power rating (PL2) rated at an insane 420W. But that’s not all, the actual CPU (BIOS-enforced) power limit is reported at 764W which could be with AVX-512 enabled. 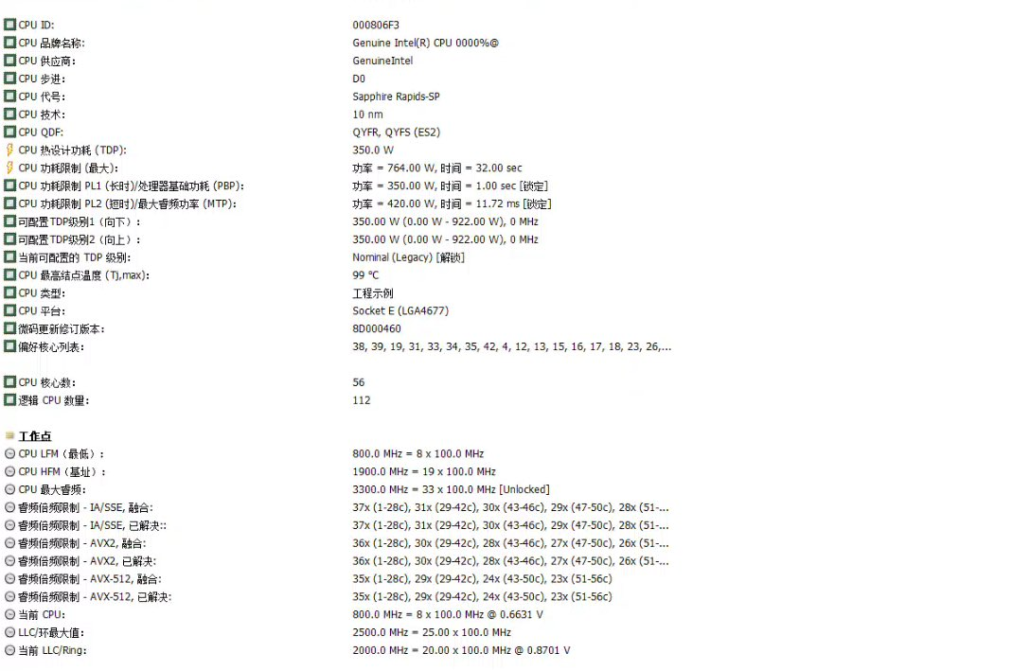 As for how well the chip was operating, the Intel Sapphire Rapids-SP Xeon CPU can be seen running at 99C though we don’t know what sort of cooling was used to test this chip. Bear in mind that load was not applied to the chip. While early performance benchmarks look decent enough against AMD EPYC Milan, the CPU will launch at a time when Genoa will be at its prime, and based on the power numbers here, things aren’t looking great for Intel in the efficiency department. We know that the final samples will retain the power limits but they might offer better thermal & power management than the engineering samples. But whether or not that’s enough to tackle AMD’s EPYC lineup will remain to be seen.