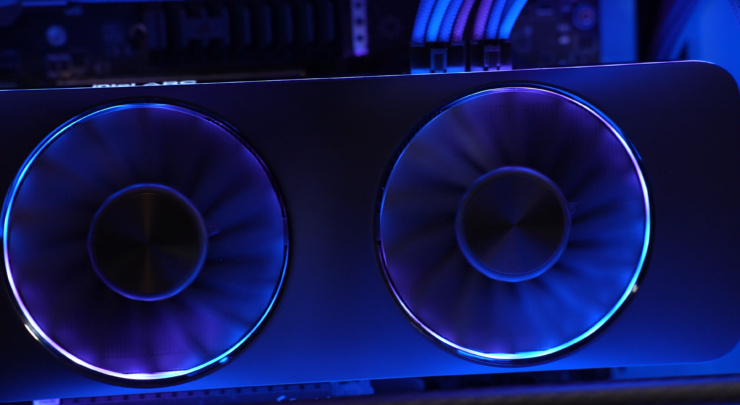 Intel’s Arc A770, the flagship Alchemist graphics card based on the DG2 GPU architecture, has been premiered during the “Gamer Days” event.

The Intel “Gamer Days” event is going to last till September 4th and not only is Intel showcasing their latest hardware for gamers but also giving away tons of prizes through various streams & social networks. During their ongoing stream at Twitch, Intel let streamers, Robeytech and Cobalt Streak, assemble PC featuring their latest and great hardware including the Arc A770 graphics card.

The final specifications of the PC include:

The final PC that was assembled looked gorgeous as ever but the component that stood out the most was definitely the Intel Arc A770 Limited Edition graphics card with its gorgeous shroud that comes coated in an all-black color scheme with hints of silver and a beautiful accent light strip that encircles the shroud and features diffused RGB lighting. The “Intel Arc” logo on the side also has built-in LED illumination.

We also get a first look at the official Intel Arc A770 Limited Edition graphics card packaging in a video from the stream that was clipped by user JustBettor. The full video can be seen here. The LE model will come in a package that is centered around the Blue theme and open up like any standard package. The card can be seen seated over the foam while a small “Let’s Play” manual guide is placed within the top cover.

The Intel Arc 7 lineup is going to utilize the flagship ACM-G10 GPU and we already know about the mobility variants which include the Arc A770M and the Arc A730M. Similarly, the Arc A770 is one of the top-end variants for desktop PCs that is equipped with the full ACM-G10 configuration, utilizing 32 Xe-Cores for 4096 ALUs, and 32 ray tracing units.

In terms of clocks, the GPU should operate at a peak boost of 2.4 GHz which is always going to be higher than its advertised engine clock speed. At 2400 MHz, the GPU should be able to deliver close to 20 TFLOPs of FP32 horsepower.

The card also features 16 GB of GDDR6 memory across a 256-bit bus interface. The GPU is supplied power through an 8+6 pin connector configuration which maxes out at 300W though the actual TGP/TBP should be lower than that around the 250W range. The demo showed the card running at around 190W.

As for performance, we should expect the Arc A770 to land in between the NVIDIA RTX 3060 Ti & the RTX 3070 considering the Arc A750 is up to 17% faster than the RTX 3060. We recently got a demo with the Arc A770 running several AAA games with raytracing and XeSS enabled. More on that here.

But that’s not all, Intel has commissioned several modders with an Arc A770 graphics card to make a PC around its core theme. Some modders have already shown us their talents as can be seen in the videos posted below:


Blue team has also switched gears to the max for its Arc marketing with the Arc Truck already being tested for gaming with several gamers trying out the latest Arc graphics cards.

Great event testing out our gaming truck in Hillsboro. Great teamwork across orgs and those who just wanted to help get this event ready. Next stop #PAXWest #IntelArc pic.twitter.com/QCxvGv9Cev

Intel has stated that they will share more details such as price, performance, and availability before the products go on sale so expect more information in the coming weeks. The launch of high-end Intel Arc discrete graphics cards is scheduled for next month.

What are your thoughts of Intel’s Arc graphics cards so far?