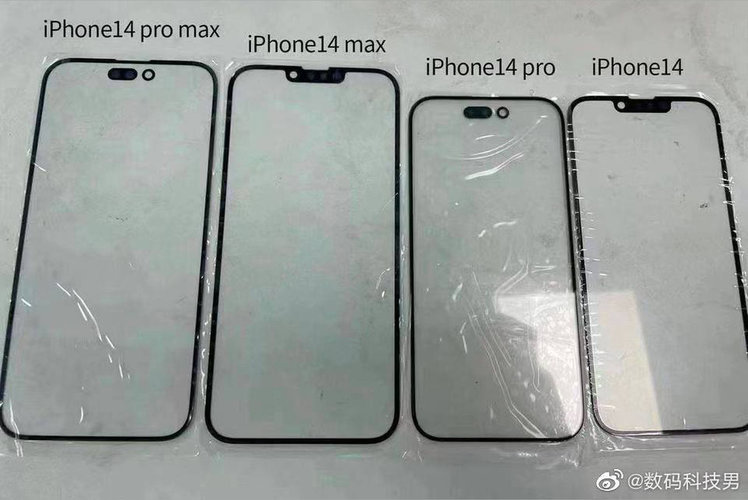 Apple’s next iPhone, presumably the iPhone 14 series, is already widely rumoured. The Pro models are expected to feature new displays with a pill-shaped cutout and a hole for the Face ID sensors and front camera. Now, a real-world image of the new phones has surfaced online.

Front glass panels for all four iPhone 14 models have appeared on the Chinese social media website Weibo (via @SaranByte on Twitter and reported by 9to5Mac). The leaked image reveals not only the pill-and-hole design for the iPhone 14 Pro and iPhone 14 Pro Max but also thinner bezels and a taller aspect ratio for those handsets. The image also shows that the standard iPhone 14 and iPhone 14 Max models will have the same notch as iPhone 13 models. Keep in mind this leaked image is not confirmed, but it lines up with previous leaks we’ve tracked so far.

iPhone 14 front panels have leaked on Weibo – here are the changes to note:
1) thinner bezels on the Pro models, as reported by other sources
2) aspect ratio is also slightly different on the Pros (19.5:9 to 20:9); this corroborates with 9to5Mac’s report regarding taller displays pic.twitter.com/UtqNcBB9aP

Other rumoured iPhone 14 Pro features include a 48-megapixel rear camera and an improved front camera with autofocus, and more. See Pocket-lint’s guide on the upcoming iPhone 14 for more rumours.

Apple typically releases its new flagship iPhone models in September and normally on the second Tuesday of the month. That’s been the pattern for a number of years – at least it has been if you ignore 2020. Assuming Apple continues with this strategy, it is possible the iPhone 14 and iPhone 14 Max will be announced on 13 September 2022. If we are right, we’d expect pre-orders to open for the iPhone 14 models on the Friday following their announcement, which would be 16 September, with availability then likely to be 23 September 2022. Remember, this is just guesswork for now though.

Of course, nothing is confirmed as yet, nor will it be for several months, but that would be the date we would pencil in the diary for now.