AMD isn’t wrong for reducing laptop performance for better battery life, but the industry needs to be more honest about the practice.

There are few examples as inspiring as AMD when it comes to tech media — a formerly written-off company is now making a powerful comeback, taking on the lumbering old Intel. AMD seemingly can do no wrong as the underdog. Not only is it a great tale, but it is also good for the industry, thanks to increased competition.

But putting aside the hyperbolic fanbases from both camps, AMD does have some odd behavior found in laptops. I’m not sure it’s the wrong approach, but it’s a very different one from Intel’s.

The issue at hand is a significant reduction in performance across the board — CPU, GPU, and even the SSD — when using the laptop’s battery compared to being plugged into a wall. It is something I’ve talked about with Surface Laptop 4, found in the ASUS ROG Zephyrus G14, and now the new Razer Blade 14. Intel systems, by comparison, don’t do this at all.

Who is right, and does it even matter? Let’s talk about it.

AMD Ryzen Mobile and the “throttling” of performance 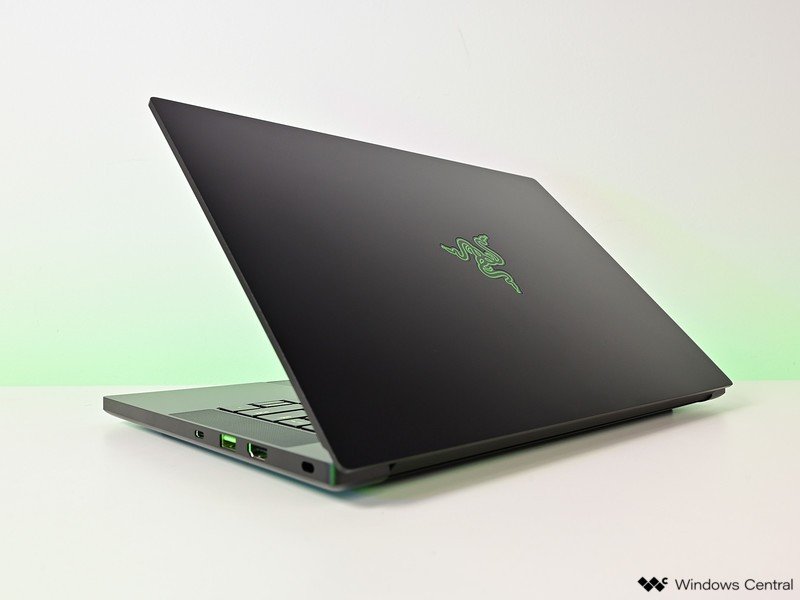 When plugged into a wall for power (AC), modern AMD laptops are powerful machines, obliterating most Intel laptops thanks to their multi-core advantage (Intel still pulls ahead on single-core performance, for what it’s worth). AMD is so good that it can rival Apple’s M1 on Cinebench, even passing it on multi-core performance.

AMD laptops also get commendable battery life. It is not mind-blowingly good, but it often competes with or approaches Intel’s Evo-certified laptops. And from that perspective, the narrative is AMD laptops get much better performance and excellent battery life, so why go with Intel? 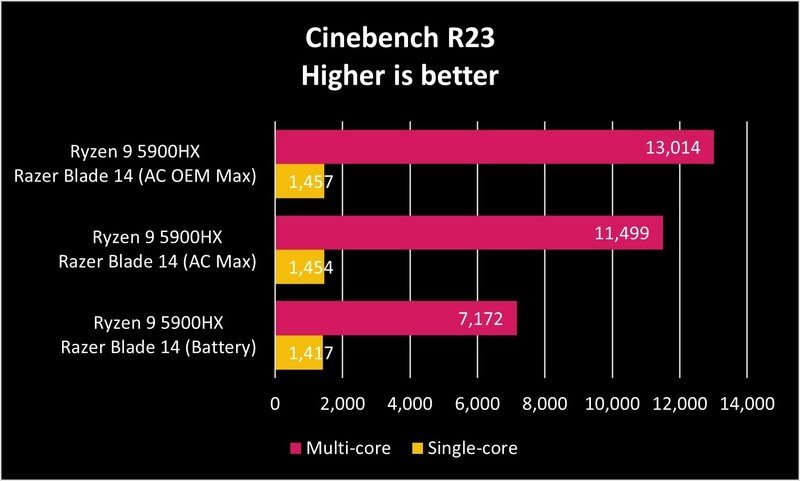 The trouble I have with that narrative is many AMD laptops achieve their battery life because, when not on AC, the performance of the CPU, GPU, and even the SSD is dramatically slowed down. I tried to illuminate this issue in my Surface Laptop 4 review: An Intel Surface Laptop 3 beats a newer AMD Surface Laptop 4 when both are on battery yet they get the same amount of battery life. Bring the Core i7 Surface Laptop 4 into the picture, and it obliterates the AMD one when away from the charger yet manages analogous battery life. 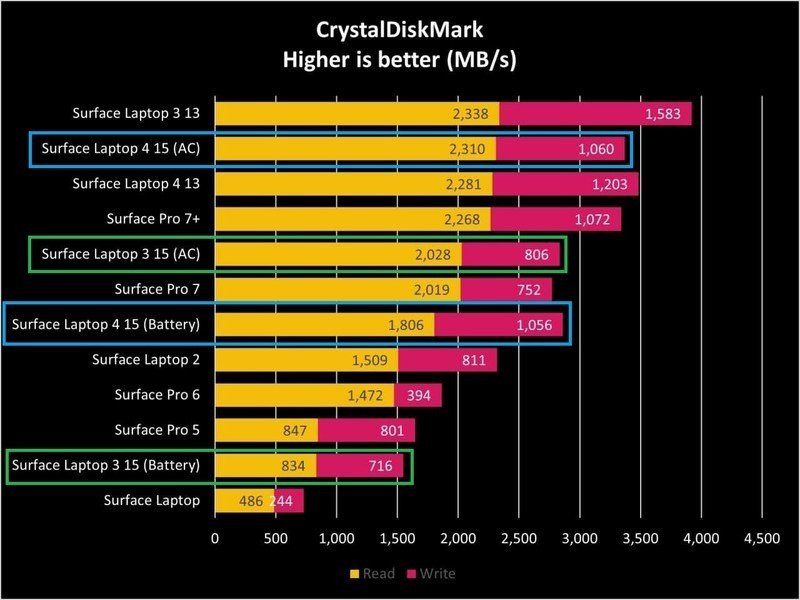 Reduced SSD speeds on AC vs. DC for Surface Laptops with AMD.

On the Razer Blade 14, these drops were even more significant. On 3DMark’s Time Spy Extreme, frames per second (FPS) drop from 33 FPS to just 11 in one graphics test. In another, 29 FPS to just 9 FPS when switching from AC to DC. The SSD drops from a very respectable 3,562MB/s sequential read to just 1,811 MB/s – nearly halving storage performance.

Razer does let you set some “extreme” settings in its Synapse software to push the Blade 14, but it only applies to AC, not when on battery. And that’s how you can summarize the Blade 14: It’s bonkers powerful on AC, but on battery, it’s simply OK at best, disappointing at worst.

As to why this happens, it is clear AMD would like to prolong battery life, which is an admirable goal. Razer confirmed the SSD performance drop is due to PSPP (PCIe Speed Power Policy) set by AMD and is not something it can control. I assume something similar is happening with the CPU and GPU, too.

But Is AMD wrong? 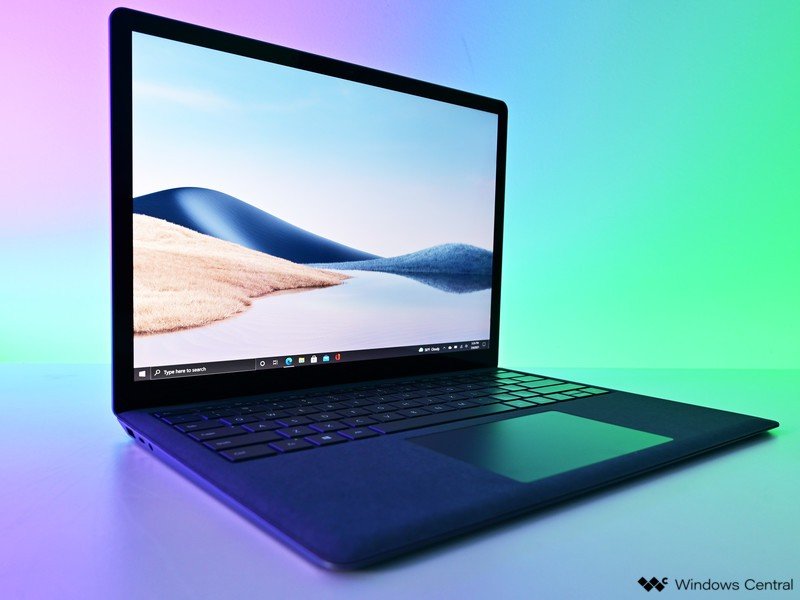 Surface Laptop 4 with Intel Core i7.

AMD is trying to find a balance between performance and battery life, and its strategy makes sense when you think about how people use laptops. I’ve known quite a few video editors in my career, and they all worked plugged-in, which is likely the same for gamers. When you want to do serious work, you find a power outlet. I think that assumption is valid for most users.

I believe that defense dwindles on Surface Laptop 4, where users are more about productivity than heavy lifting — should their performance be cut when launching Excel or running a web browser? I do not see the upside there.

To be clear, when using something like the AMD Surface Laptop 4 on DC, it never felt sluggish. And that may be the point. The Razer Blade 14 is a bit more complicated, as one owner let me know he is returning it precisely because of the degraded performance:

On my Razer Blade 14 performance is so bad on battery that at times Windows will become entirely unresponsive. It’s obvious this was done on AMD’s part so that they can try and claim the battery crown, but what good is great battery life if the laptop isn’t enjoyable to use?

Intel takes a differing approach to modern computing. Newer 10th and 11th Gen laptops barely budge in performance regardless of the power state (AC or DC). Intel prioritizes short bursts of performance, so when you launch an app or open the lid, the laptop is instantly responsive (AMD, meanwhile, has a “10-second delay” to ramp up). Intel does this while also getting impressive battery life, especially when the laptop meets Evo requirements.

However, I do think there are two issues with AMD that need to be addressed: 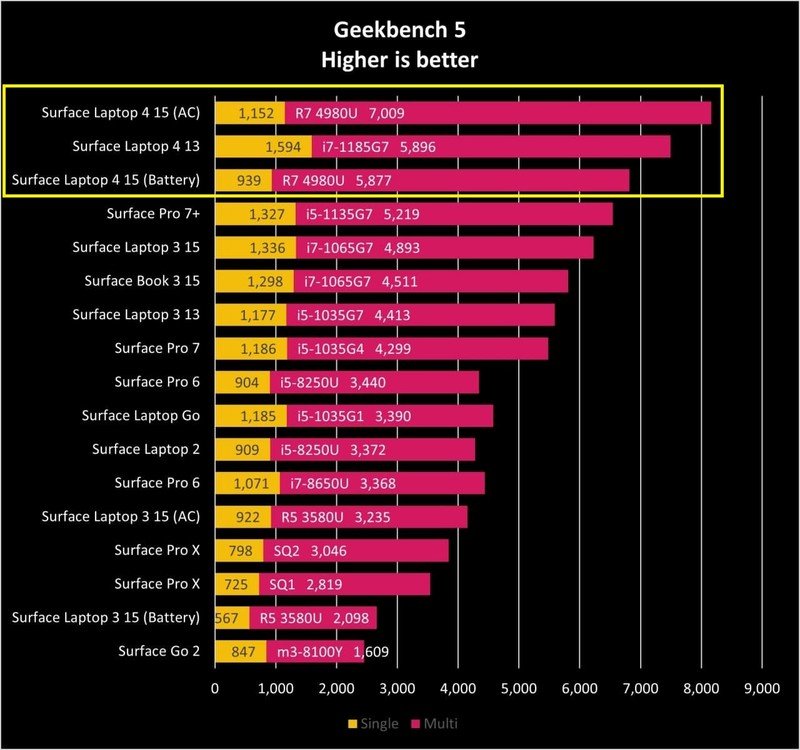 Which is Surface Laptop 4 is faster? It depends.

The first one is on laptop makers to be honest about how these chips work. Most reviewers plug in the laptop, set it to max performance, run some benchmarks and call it a day. It is rare to run a suite of benchmarks on battery because, historically, there has been a negligible difference. But that has changed now with AMD.

The second item is more baffling. Microsoft built a robust slider mechanism into Windows 10 for controlling battery and performance. “Battery saver” reduces performance and dims the screen. “Recommended” tries to balance everything for most users. “Better performance” favors the CPU and GPU, and “Best performance” lets everything fly. Microsoft wants you to pick the power mode you need at the moment.

But, while Windows has this system in place, some AMD laptops do not follow it, at least not like Intel. Set your Blade 14 to “Best performance,” and your processor and SSD will slightly increase performance, but to a degree that is still miles behind “Best performance” when on AC. Want to flick a switch to get the same performance on AC as on DC? Sorry, it does not exist.

All of this feels off for me. At the very least, AMD should let users push the system as hard as it can, battery life be damned.

Why is AMD given a pass on this? 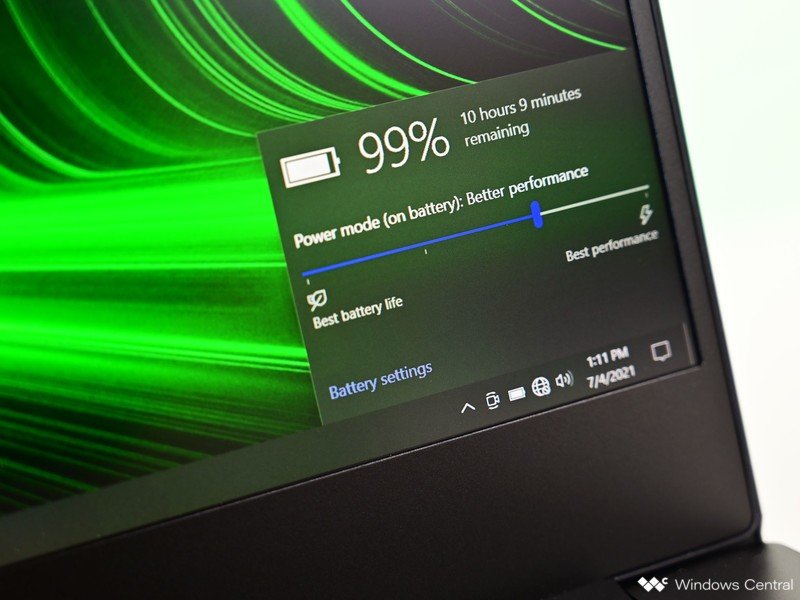 I’m sympathetic to AMD’s goals here, but I am also surprised its strategy is not a bigger deal.
This week, we got this headline: “OnePlus limits app performance on OnePlus 9 and 9 Pro to improve battery life,” which is causing quite a stir. Sound familiar? Sure, there are some differences, but when was the last time you fully expected your laptop to drop by 40% in performance when not plugged in? Did I miss something where this became normal?

Turning the tables, imagine if Intel was bragging about the improved battery life in its processors only to have it revealed that it achieves this by nearly halving system performance — even the SSD! — when not plugged in. AMD fans would be frothing about how stupid Intel was, tech headlines would be trashing the company, and it would be a PR nightmare with Intel being accused of cheating. But when AMD does it, it is no big deal. Go team red?

PCWorld did an excellent analysis of the topic providing a ton of data. It takes the same even-handed attitude as I am trying to do here — as I said, I get why AMD is taking this approach.

But as a reviewer, my problem is this adds a new wrinkle in explaining system performance, which is already highly complicated. Do we now need to report a laptop’s performance both on AC and DC? Will audiences understand why setting to max performance is not max performance if you are not plugged into the wall? And does anyone even care?

AMD vs. Intel is not black vs. white

So, who is better: Intel or AMD? It is a rhetorical question, as both companies are doing some exceptional work in the processor space. What is also becoming clear is AMD is forging its own path on how it thinks laptops should operate, and it differs from Intel. That is all fine.

While I am not against the idea of reducing system performance to increase battery life, I am not sure why AMD needs to ignore the system performance slider found in Windows 10 to get there. It all feels a bit too hidden from the consumer. I am also unclear on why laptop makers are not more forthcoming about these performance drops, although that seems self-explanatory – it does not look good, even if the intention behind it is.

In the end, the market will likely sort this out, and that is where you come into the picture. Do you think AMD’s approach is the right one? Does it impact your thoughts on buying a new laptop? Should we even bother talking about DC performance differences in notebooks? Should Intel cut its performance on DC, too?

Let me know what you think.