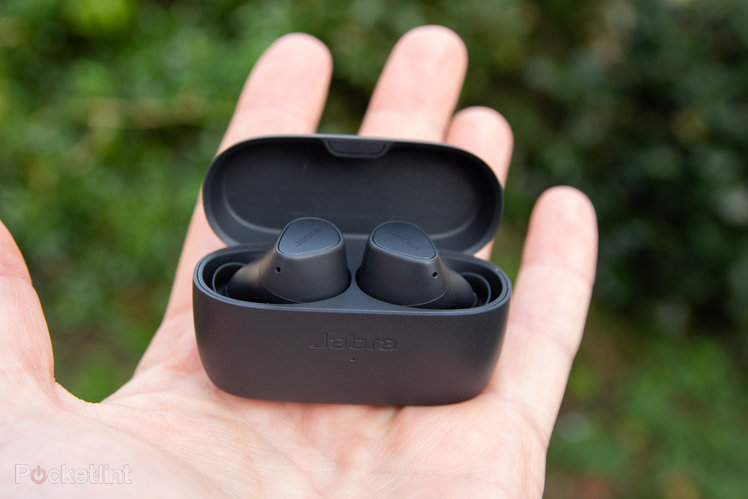 Jabra has built up quite the reputation over recent years for its true wireless headphones. While its Elite category has offered arguably best-in-class performance, that name now finds its way to a lower class of headphone.

The Elite 3 are positioned lower than previous Jabra headphones, stripping down the features for an attractive price point. But what do you actually get and does it make best sense at this price point?

The Jabra Elite 3 come in a charging case that’s essentially the same shape as previous high-end headphones, but a little more compact. That’s because these ‘buds are a little smaller than previous Jabra offerings, so they take up less space. 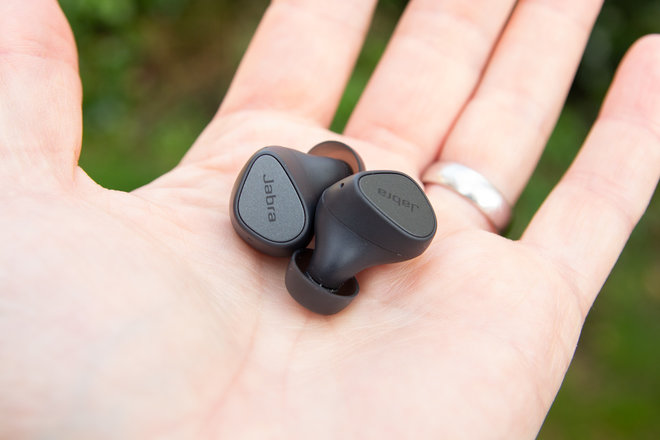 The earbuds from the inside are a similar shape to Jabra’s other ‘buds, but taper down to a smaller overall area for the external face. There’s a button on each, which makes up the entire flat surface on the exterior and is used for control.

There are three EarGels – we’ll just call those what they are: tips – so you can choose the size to get the best fit within your ear. There are no hooks or fins or other devices to attempt to get these ‘buds to stay in place – you just pick the right size tip and push into place.

In our experience, the Elite 3 stay put, but they do stick with a round EarGel rather than oval one we saw on the Elite 85t earbuds – the latter which we found to provide a slightly better overall fit. But, as this is at the affordable end of the spectrum, that’s to be expected.

The IP55 rating is welcomed, as it means that it doesn’t matter if you get caught in the rain or sweat into these headphones – and that means you don’t have to worry about how or where you wear them.

The lid to the charging case on our review sample had a little rattle to it – the hinge perhaps being a little loose – but on a set of headphones at the affordable end of the spectrum, you can’t complain about this too much.

When you first open the Elite 3 they are easy to connect to your phone via Bluetooth as they’re instantly in pairing mode. Some phones will detect them automatically using Google Fast Pair, others might require searching via the Bluetooth menu to pair as a new device.

At a basic level, that’s all you need to do – and with minimal features on these headphones, you might feel you don’t need the Jabra Sound+ app. This app manages firmware updates, so is useful on that front, but it also means you can pick from the preset sound profiles to adapt the sound slightly to your preference – but there’s no custom equalisation. 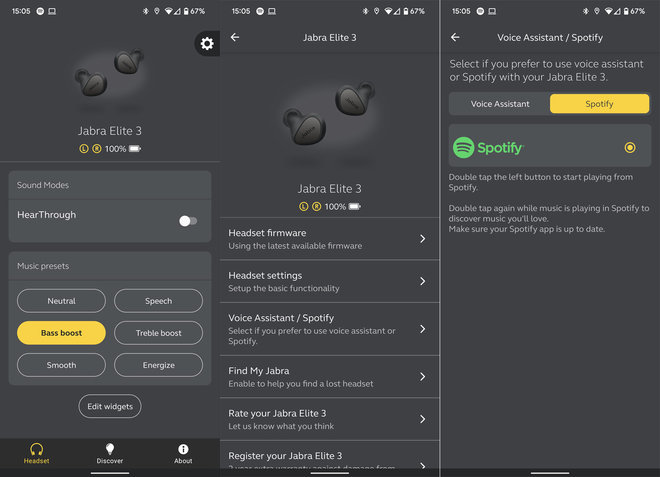 The buttons on the Elite 3 offer a range of functions. The left-hand one will allow you to switch on the HearThrough function, allowing ambient sounds in to reduce the feeling of isolation or help you keep track of what’s happening around you – which some people prefer when moving through busy places.

There’s no active noise-cancellation (ANC) technology on these headphones, so the alternative to HearThrough is just “off”. In addition to controlling this through the left button, the Jabra Sound+ app can also turn this setting on and off, while Android users will also get a section in the notifications area allowing quick switching of modes.

A double-press of the left button can be set to launch Google Assistant, Siri or Alexa (if you have the app installed on your Android phone and set as your default voice assistant), while Android devices can opt to change this to trigger Spotify playback, which is a nice one-touch function – one of the first devices to appear with Spotify Tap. 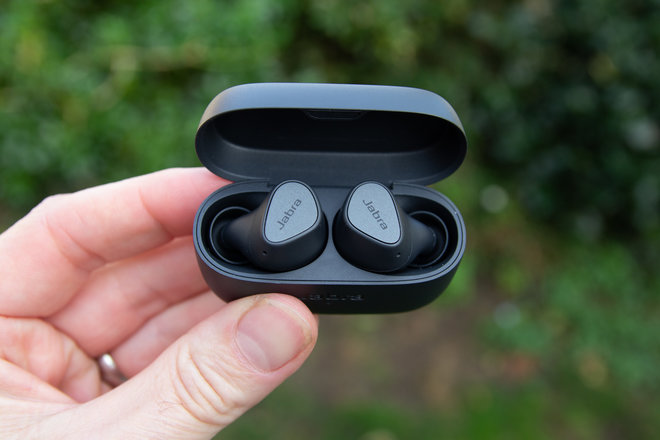 The right-hand button offers multifunctions on presses – play/pause, skip, back. In addition, a press-and-hold of the buttons will change the volume – it’s up on the right and down on the left – which is a useful feature.

These controls are easy to master and, given the affordable positioning of the Elite 3, the omission of ANC isn’t surprising. But ANC is arguably Jabra’s biggest selling point – if you want it, you’ll have to opt for something like the Elite 7 Active.

The other thing that Jabra has removed is the voice feedback that you get on more advanced headsets – instead you get confirmatory beeps instead, which isn’t as useful because you basically don’t know what’s happening. 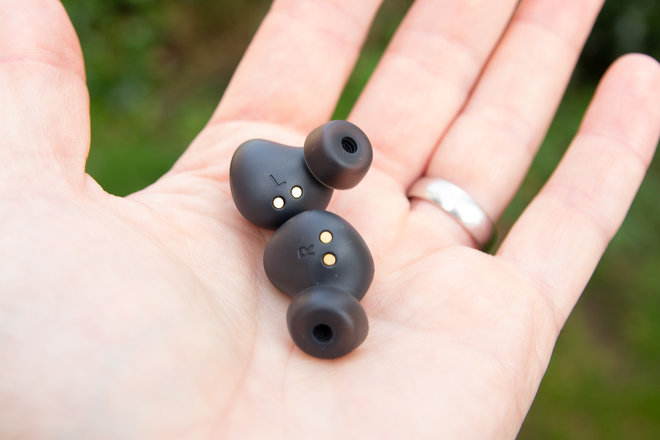 But on the whole, it’s a solid set of controls, allowing easy control of music playback without having to fish your phone out of your pocket. With that Spotify option, Android users get a better experience than iPhone users.

Getting the best sound out of these headphones is perhaps a little more difficult than with Jabra’s other headsets. Having used the Elite 75t and 85t models extensively, we find that the Elite 3 need a little more careful positioning to get them sounding the best.

If the positioning isn’t quite right, you’ll find that they’re not as bassy or as rich in sound – and the isolation of exterior noise isn’t so good – so give them a wiggle to make sure they’re performing as they should. 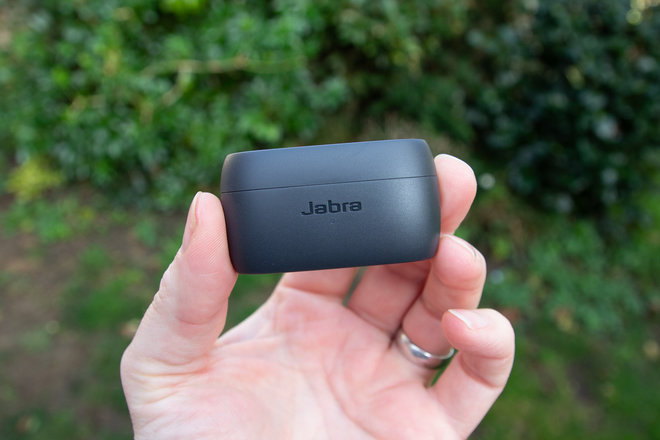 There are 6mm drivers in the Elite 3 and the performance is good for the price, but with the lack of custom equaliser there’s not a huge amount you can do to adjust the profile to your liking.

You’re reliant on physical isolation to reduce background sound, which very much depends on the fit that you achieve with the headphones. Get that right and they will sound pretty good though. For risk of sounding like a broken record: certainly at this price point.

Calls can be a little noisy, however, with callers reporting that they could hear background noise. The headphones also allow in external noise, which can be a little overwhelming, making it hard to hear the caller on the other end of the line.

The HearThrough function can be useful, but doesn’t just let in external noise, it seems to amplify some elements so can be rather hissy. Walking along a road with HearThrough turned on sounds like each car is powered by steam – it’s not just ambient sound, it’s boosted in some parts of the range which makes the world sound a little odd. So, really, we’re not sure the feature is needed. 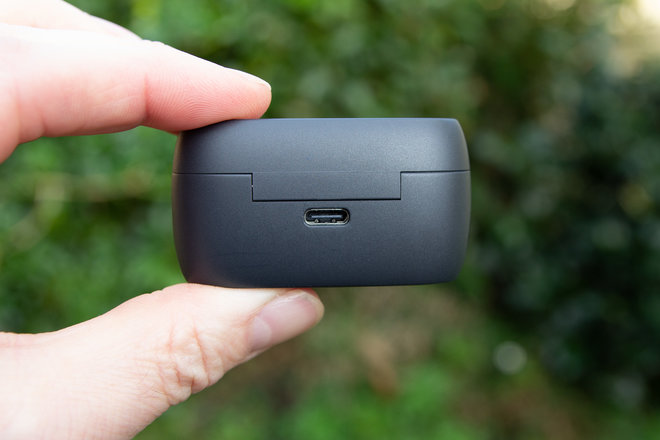 We have found the connection to be entirely solid across a range of different devices that we have tested these headphones with.