TWS (truly wireless) earbuds category has gained popularity in recent years and that’s because of their unique form factor, better features, and affordability. Gone are those days when we had to spend half our time untangling the wired earphones or shell out a crock of gold to get a good pair of TWS earbuds.

While some of the premium wireless Bluetooth earbuds were explicitly designed for elite devices (cough! I just choked on a chunk of Apple), the scenario has changed drastically, courtesy of some renowned brands’ humble effort who stepped in to offer a span-new category of wireless earbuds with advanced audio technology at a reasonable price. 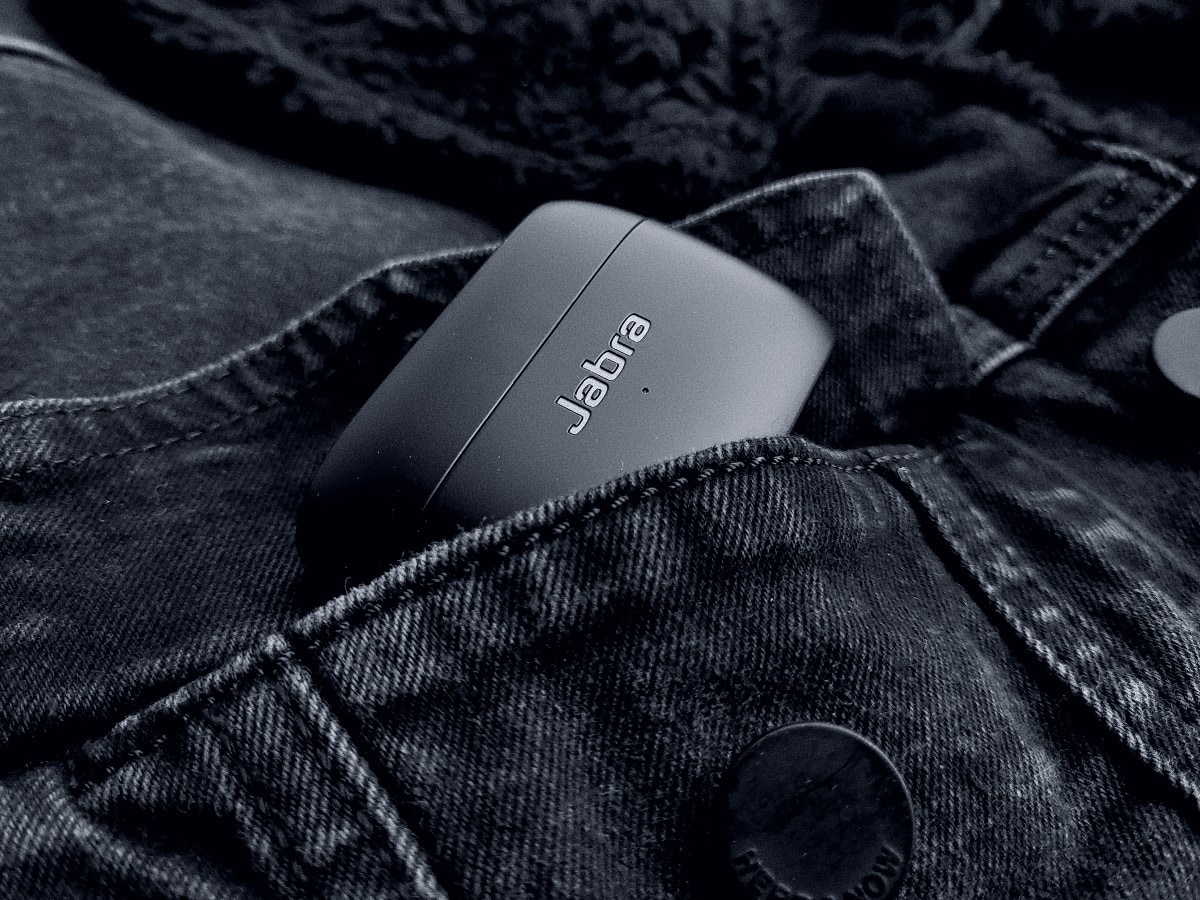 Jabra is one such brand that has managed to seize a top spot in the TWS earbuds category. The Danish brand has a long history of creating good audio products with Jabra Elite Sport being the company’s first wireless earbuds. The newest member of the Elite series is the Jabra Elite 85t true wireless earbuds that were launched for Rs 18,999.

The earbuds follow the footsteps of its older sibling, but this time around Jabra has made some significant tweaks internally on its new pair of earbuds. The new Jabra 85t sport larger 12mm drivers, six-microphone technology, and the long-awaited active noise cancelation (ANC) feature. While all these aspects look enticing on paper, the question here arises is whether it is sensible to spend a substantial amount of money on this new pair of Jabra earbuds. Let’s find out.

The Danish audio brand has made some tweaks to its new Jabra Elite 85t TWS earbuds design. Jabra says that they have implemented a semi-open design which means you don’t have to force the silicone tips inside the ear. The oval-shaped silicon Ear Gel tips are said to provide a secure fit to the ear canal and serve the purpose of ANC. Each earbud gets a physical button with the Jabra logo inscribed in it. 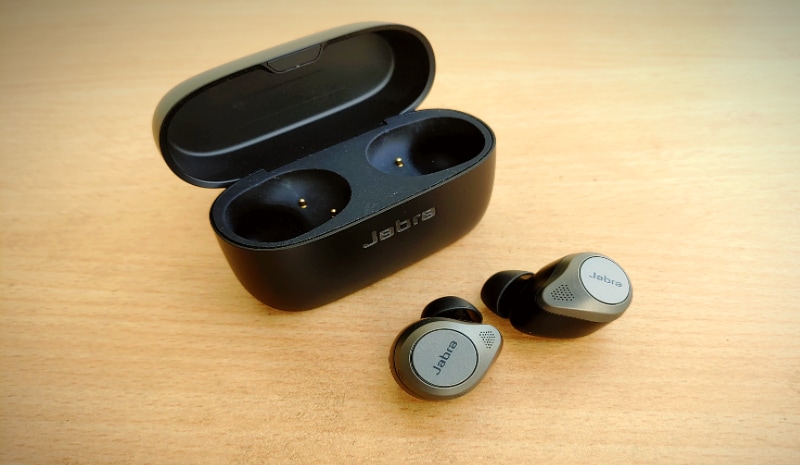 Each earbud gets a physical button with the Jabra logo inscribed in it. The buttons offer single, double, and triple press functionality to control playback, ANC, or activate voice assistant (Siri, Alexa, Google Assistant) on your phone. The controls can be readjusted in the Jabra Sound+ app. While all the aspects look good on paper, I personally didn’t find the earbuds as comfortable as I expected them to be. Besides, pressing the button to accept a call or while changing the soundtrack did hurt my ear. 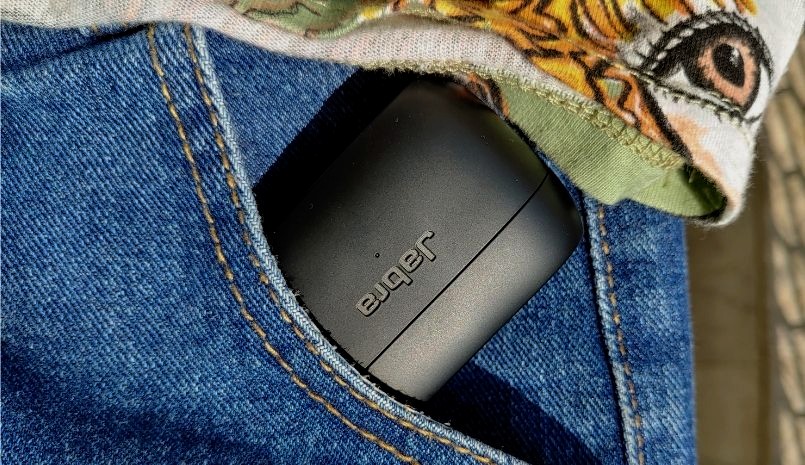 Although Elite 85t looks quite similar to the previous Elite 75t earbuds, the new earbuds are a bit bulky and protruded. The bulkiness is no doubt meant to accommodate the advanced ANC technology, but I could feel the weight after prolonged use and at times I felt like holding a tiny box in my ear.

Putting the quibble aside, Jabra Elite 85t offers enriched audio quality with good dynamic range and frequency response. The large 12mm drivers pump up the bass, and I could feel the oomph while tuning to some of my favourite soundtracks. The earbuds don’t support aptX, but Jabra has used higher quality AAC format to provide an immersive audio experience. That said, the Elite 85t offers a well-balanced soundstage and deeper bass. The earbuds are pleasant to listen and I didn’t find any distortion even while playing songs at high volume. 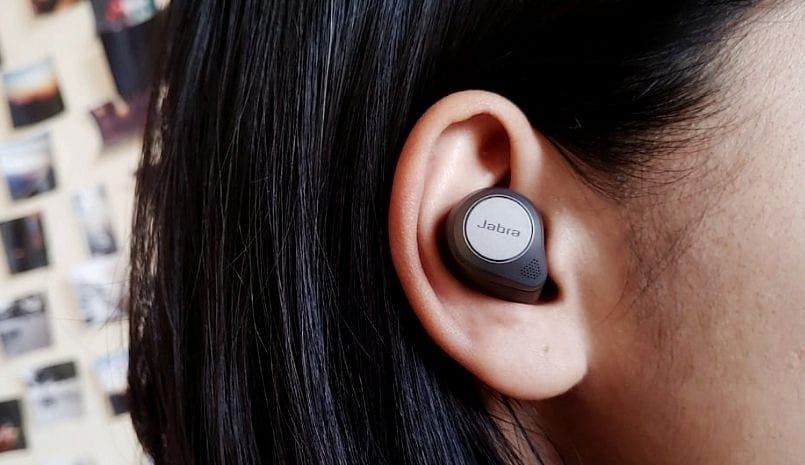 Listening to Closer by ElderbrookI was amazed by vocal clarity and booming bass playing simultaneously in the background. The songs Thrown Down by Fleetwood Mac, and Wicked Game by Chris Isaak, Take Cover by Mr.Big sound detailed with the strumming of the guitar, drumbeats relayed distinctly. The earbuds give you balanced lows and excellent mids. While the highs are on par with mid-range TWS, the earbuds can handle different music genres quite well.

The active noise cancellation feature is as impressive as its booming bass. The ANC be reconfigured in the Jabra Sound+ app by toggling the slider. There’s a transparency mode (aka HearThrough) that enables you to hear the sound of the surroundings.

In case you are jogging or commuting in a Metro this feature can come in handy. Speaking of noise-canceling, the advanced ANC quite effectively cuts off the ambient noise. During the testing period, I could barely hear what my colleague was speaking even though he was few meters away. There are five levels of noise cancellation that you can toggle around in the Sound+ app.

The Jabra Elite 85t has six microphone technology (three on each bud, two on the outside, and one on the inside) out of which four are used for noise cancellation. While testing, the recipient on the other end could hear me clearly even with all the hustle and bustle at the station.

To make the best out of Elite Jabra 85t, it is recommended to download the Jabra Sound+ app. The app allows you to customise equalizer, select preferred noise cancellation, adjust ANC with a slider. It offers five EQ presets as well. The Moments option available in the app allows you to select between My Moment, Commute, and Focus. You can customise each option and adjust the noise cancellation effect either on Active Noise Cancellation/HearThrough mode. 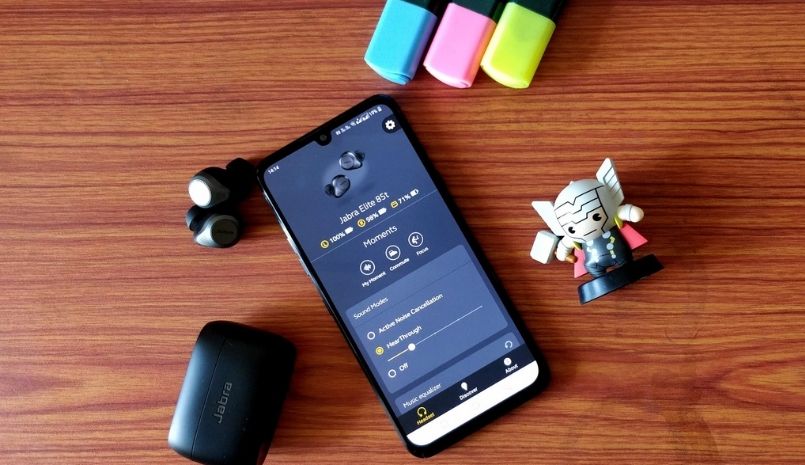 Speaking of connectivity, pairing the earbuds with my Android device was a breeze. Throughout my usage, the connection was fairly stable. It comes with multipoint Bluetooth pairing that allows connecting two devices simultaneously. The right bud does all the major handling (audio or taking calls), while the left bud only transmits the audio on the other end. That said, Bluetooth multipoint switching is a convenient option especially when you are listening to favourite soundtrack and need to take a conference call in the middle.

During my usage, the earbuds lasted close to five hours with active noise cancellation on. With ANC turned off, the battery lasts six and a half hours. The plastic magnetic case amp up fully within three hours via USB-C. The charging case comes with Qi wireless charging support as well. 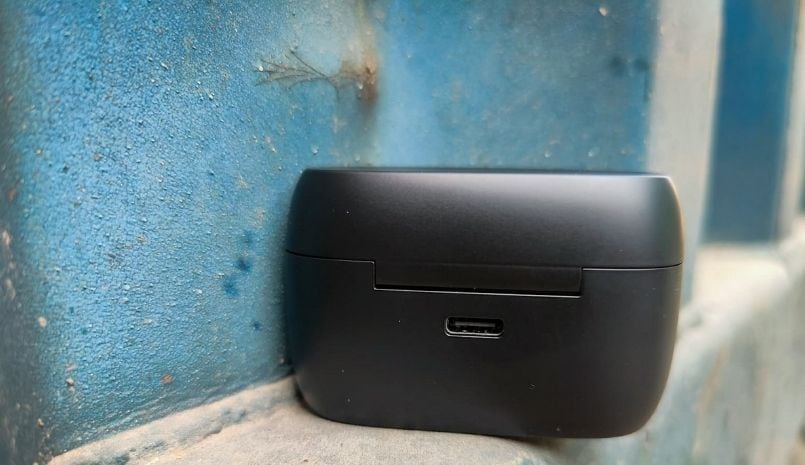 Jabra Elite 85t is a good pair of TWS earbuds that offers stellar performance, but the question comes down to whether you should pick these earbuds or not. Well, if you are a frequent commuter who prefers listening to your favorite playlist without any ambient disturbance, Jabra Elite 85t can be the perfect pick, courtesy of its effective noise cancellation feature, vibrant profile, and deep bass reproduction.

The pocketable charging case is easy to carry, and the magnets strongly hold the earbuds. The only caveat that I found is its bulkiness and protrusion a little out of the ear. But that is subjective given you may not have baby-size ears like me. In a nutshell, if you are looking for slightly less expensive TWS earbuds (unlike Apple Airpods Pro or Sennheiser Momentum True Wireless 2) with the best noise-canceling feature and good sound quality, you won’t regret buying Jabra’s new Elite 85t earbuds.