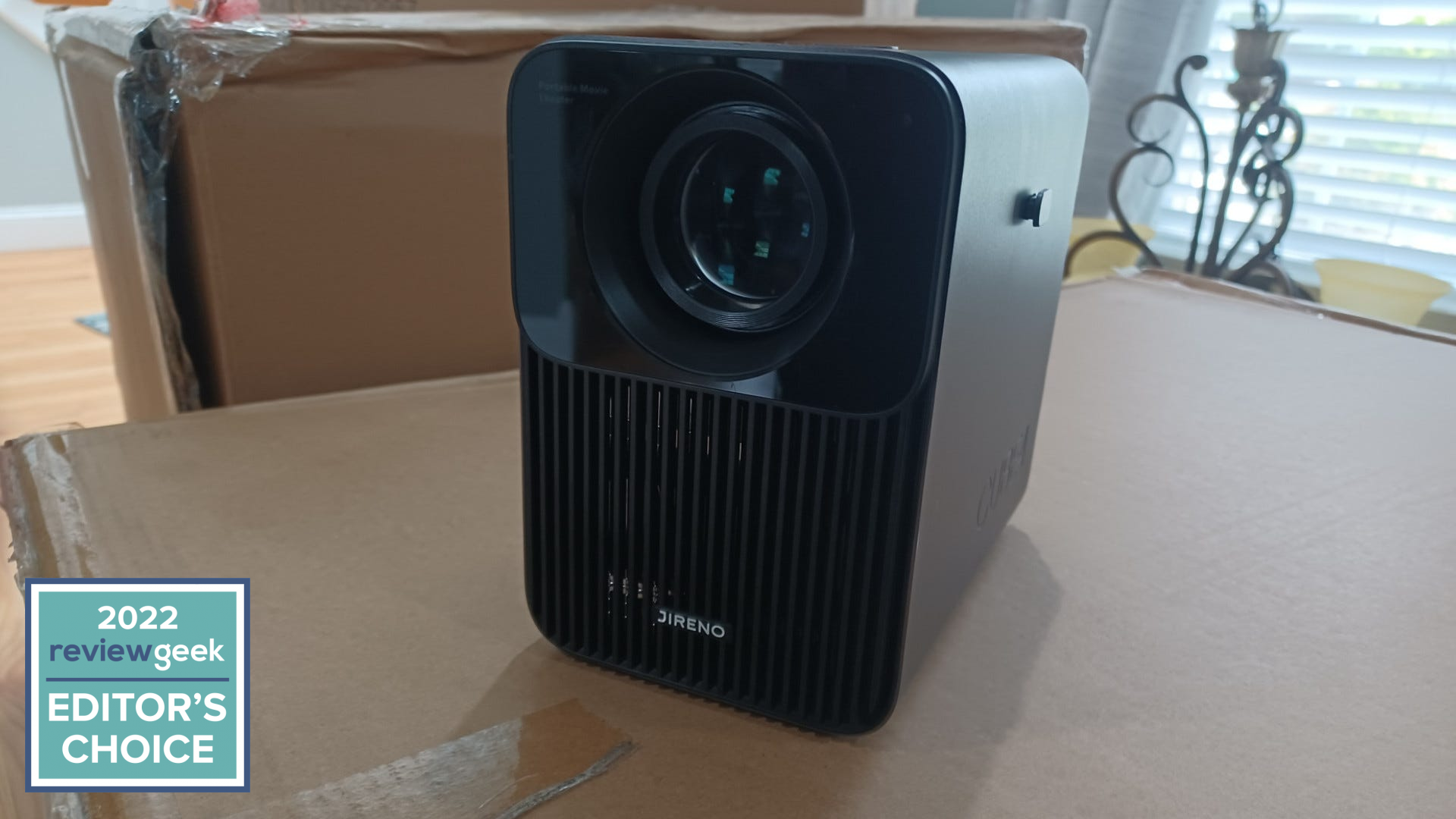 The JIRENO CUBE 4 is a powerhouse of a projector that is well worth the price of admission. With its 1080p FHD Resolution, Full 4K Decoding, dual 5-watt speakers, and built-in Android TV, the JIRENO CUBE4 has everything you want in a portable projector. The only problem: it’s not that portable.

Wrapped in an aluminum case, the JIRENO CUBE4 feels sturdy. Like most projectors, the CUBE4 is a little cumbersome. Weighing in at about five pounds, picking it up feels like holding a toaster. The only grips are an attachable set of leather bands used as a handle. The strap went on just fine, and it’s more than capable of supporting the projector’s weight. I carried and hung it up around the house with no issues.

At the top of the box sits its power button; it’s a little hard to notice at first, but you won’t lose sight of it afterward. The mount is nicely tucked away on the CUBE4’s underside.

This projector hits the minimalist aesthetic pretty well; all of its features are low-profile and flush with the casing.

The projector’s lens sits above a fan on the front-facing side, with a secondary fan located at the back of the projector. The fans are quiet enough—movie and TV show audio drowned them out almost all of the time. Still, there were a few occasions when the movie quieted down and I could hear both fans spinning on the other side of the room.

The JIRENO CUBE4’s input ports are found along the projector’s rear side, supporting DC, USB, HDMI, USB-type C, and a 3.5mm audio jack. It also features Bluetooth 5.0 and Dual-band WiFi (2.4GHz and 5GHz) connectivity—all of these provide alternative ways to operate the device. It’s a nice spread but ultimately to be expected in today’s age of projectors.

JIRENO advertises functionality with PCs, phones, tablets, Google Chromecast, and cameras; it all works as intended with no major drops in connection to be found.

This projector fits anywhere you could toss some books, but it does require a power outlet and it’s not water-resistant. The Cube’s portability is advertised as one of its significant draw factors, so worrying about rain is a little bit of a damper.

The JIRENO CUBE4 is still very much a projector, which are not well known for being portable. The CUBE4 is certainly smaller than most, but it’s a noticeable 5-pounds in weight and around 7-inches in length and height. I could carry the CUBE4 in a backpack or duffel bag, but it’s far too big to comfortably fit in most purses or messenger bags. This isn’t much of an issue if you’re driving the projector where it needs to go, but it’s heavy enough to weigh down your bag while you walk.

You definitely won’t want to carry this around like you would a tablet or laptop. The lack of an internal battery kills a lot of the possibilities that would make this a truly great portable projector. If you want to use the JIRENO CUBE4 away from home, you need to be going somewhere with a large enough wall, a power source, and a way to get it there.

It’s certainly a step above most machines in the field, but these are enough clauses to make me second guess portability as a major selling point of this projector.

The JIRENO CUBE4 produces an impressive 500 ANSI lumens with its LCD lens, which converts to around 200 LED lumens. I tested it against white drywall at all times of day, and honestly, the picture quality is great. While I wouldn’t use this projector outside in broad daylight, the image looks sharp in most settings. Brightness tends to smooth out the picture, but the lens’ quality and autofocus do a decent job of making the most out of a bad situation.

The Cube 4 hits a display resolution of 1920x1080p and can, according to Jireno, project a screen size of up to 200-inches. Those measurements come with a caveat; after a certain point, the image quality starts to noticeably dip. It starts getting muddy at around 100-inches but remains perfectly watchable for the entire advertised distance. It only bugged me whenever I got close to the projection. It’s perfectly fine for outdoor viewing.

As mentioned before, the CUBE4 has dual 5-Watt speakers with customized diaphragms designed to make the sort of big echo you’d get in a movie theater. It certainly succeeds at simulating a more expansive room, but ultimately, it is still just a single source of audio. The actual sound quality isn’t bad at all, only ever getting distorted in scenes with polluted soundscapes—and even then, it wasn’t by much.

Thankfully, the Jireno Cube 4 supports external playback devices through Bluetooth and its 3.5mm audio jack. I don’t consider it necessary to use because the built-in speakers are perfectly fine; they just “simulate” larger spaces instead of actually being placed in one.

This is where the Jireno Cube’s minimalistic design frustrated me. Every function on the projector, aside from activation, is handled via an external input device. Upsettingly, the remote control it comes with is battery-powered and challenging to open. A clear down arrow on the remote’s rear side implies a slide, but there are no grooves or clips. I wound up using a knife to open the remote, which might have been an issue with the specific version I was sent, but it left a bitter taste in my mouth.

I don’t know why the CUBE4 doesn’t have other buttons; there’s plenty of blank real estate it could use without cluttering the design. If you have a model without a remote, you have to use a USB device like a mouse to control it.

Once set up, you’ll get access to the CUBE4’s built-in Android TV. As you may expect, it has all of the applications and games you’d find on a TV, like Netflix, Amazon Prime Video, and Google Play Movies & TV.

It does use an older version of Android TV OS, but it works just fine all the same and comes with the ability to install other Android apps. The Jireno Cube 4’s Am Logic T972 chip proved strong enough to handle everything I wanted to do, and its 2GB of RAM and 16GB of storage were more than enough to keep things running smoothly.

Should You Buy the JIRENO CUBE4?

The JIRENO CUBE4 is undoubtedly a respectable pick for a projector. It does everything I want a projector to do, and my frustrations were quickly remedied. Features like diffuse reflection and 6D auto-correction open up many surfaces to being a viable screen for a show. Not to mention, those dual 5-Watt speakers are punchy with enough bass to fill a room. With that said, if you’re looking for the single most portable projector on the market, this isn’t quite it.

At $299 on release, I’d consider it well worth the price, especially for social events or impromptu movie nights.