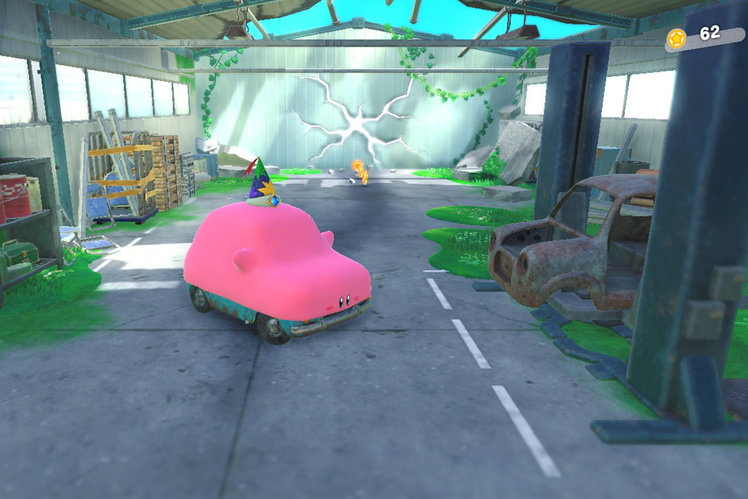 It’s been a long, long time coming, but Kirby finally has a fully 3D game from top to bottom, something that’s so surprisingly overdue that you might think it already happened without you realising.

This really is it, though: Kirby and the Forgotten Land is the 3D platformer the series has been waiting for – and we think it’s a great update for the little pink guy. The result is an excellent and inventive family-friendly platformer.

Forgotten Land appears to use a very similar game engine to that of Super Mario Odyssey, meaning it brings plenty of visual flair, variety and mechanics to the table.

As the game opens, Kirby and other denizens of his homeworld are sucked into another dimension, one that looks a lot like a cartoonishly colourful post-apocalyptic landscape.

Kirby quickly sees a bunch of his friends and Waddle Dees getting kidnapped, and that’s all the motivation or explanation needed for you to set off through a series of levels to find and free them all.

In the first world, comprising a few levels and some side challenges, you get to explore abandoned shopping malls, parks and rooftops, all with delightful touches and varied environments, and the game keeps throwing in amusing post-apocalyptic themes like these.

You’ll trudge through sand-storming deserts, navigate frozen cities and explore long-abandoned theme parks, each one with a fun sense of photorealism to the environment, contrasting with the cartoonish inhabitants. 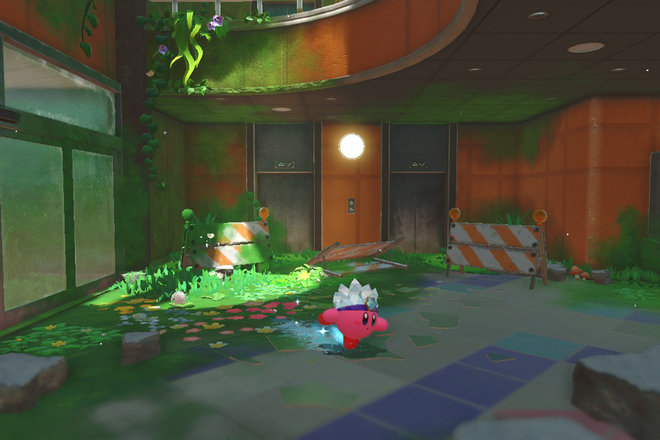 It’s also worth highlighting the superb soundtrack, which zips and bounces along wonderfully with old-school themes that sound simply excellent.

That Kirby’s come along so soon after Elden Ring feels almost providential – we’ve been able to use it as the most shocking contrast when FromSoft’s game is too stressful, and that sense of chilled-out fun is surely going to attract plenty of people.

Again, it’s worth underlining that this is the first time Kirby’s been in a fully 3D game of his own (we don’t count Kirby 64: The Crystal Shards), and the transition feels impressively seamless.

All present and correct are a litany of Kirby classics, including suction powers, the ability to copy your enemies’ own moves by inhaling them, and his familiar bobbing floaty jumps. 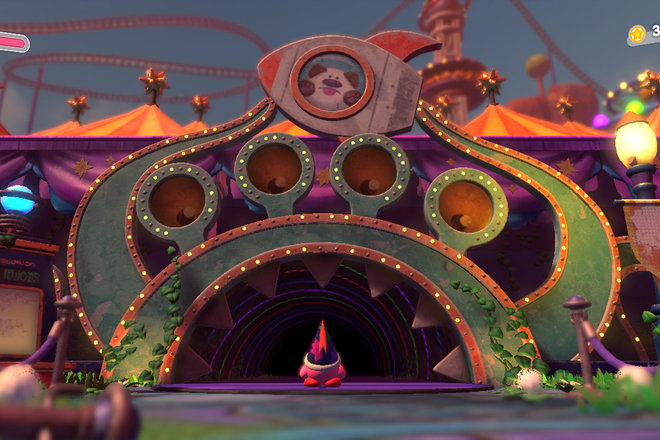 Whether you’re swallowing huge items and taking on their properties, using classic powers like sword slashes and bomb-chucking, or just moving around as Kirby’s default pink self, there’s a really nice look about everything.

However, this time you’ll do all of the action on three-dimensional stages and from a variety of camera angles. You’ll move from right to left a lot of the time, but be behind Kirby just as often, and occasionally run toward the camera, all of it working naturally.

That feels a bit like something we’d write about a Nintendo 64 game, but hey – it’s still true now. The fun in Forgotten Land comes in trying out new copy abilities (even if they’re not new to the series) and seeing what you can get up to with them. 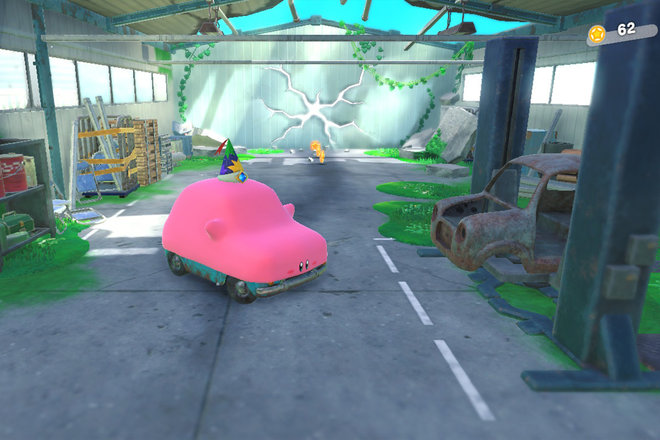 In particular, there’s a new mechanic called Big Mouthful mode, which is effectively where Kirby takes control of something too big for him to swallow entirely. The visuals of this are without exception hilarious, with Kirby stretched around a range of impractical objects.

You’ll get to take on the shape of a car (as pictured above), a staircase to access higher areas, a giant traffic cone to divebomb enemies from above, even a vending machine to pelt foes with ejected drinks cans. Each one has felt amusing and fun to control, and the game continues to offer up new options as you progress.

Between the normal copy abilities and these moments of madness, the game’s similarities to Super Mario Odyssey really are striking, given how that title let Mario possess items and animals alike. Also just like that game, the sheer visual flavour of each transformation is quietly hilarious, with Kirby’s little face centred around some massive object each time. 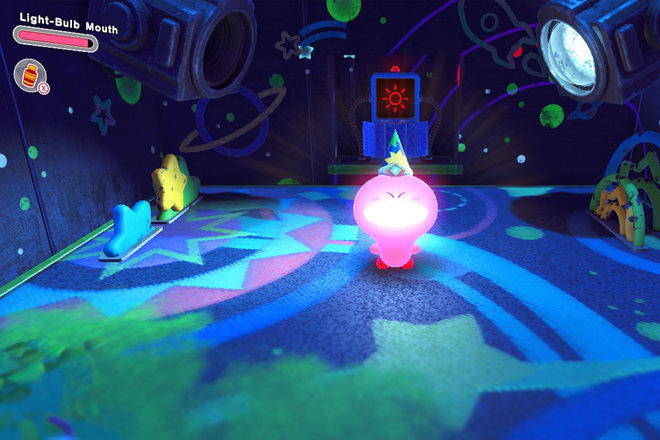 That’s a great precedent to try to live up to, but the comparison doesn’t stretch too far since the levels in Forgotten Land are far more linear than Odyssey and very rarely open into more open-ended areas. But we still think it holds water.

Where it falls down slightly is in Kirby’s own move-set, which is far more limited and less fluid than Mario’s runs and jumps. Still, you can get into a nice flow state and for all of Odyssey’s family-friendly appeal, we think Kirby is a game that even younger players will be able to get to grips with and enjoy, thanks to simpler level layouts and more forgiving difficulty settings. 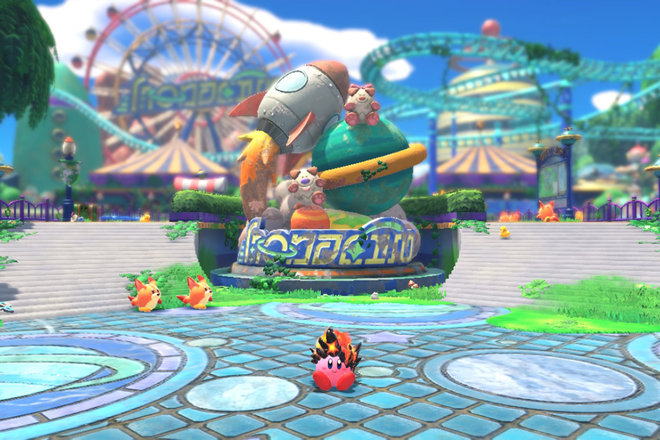 For the first time in the series, there’s a new difficulty option, too, called Wild Mode – it’s not so much a harder mode, but more so offers the “normal” option that Kirby normally misses. It raises the challenge slightly and makes enemies a little bit more durable.

This is the mode we’ve been playing on throughout, and while we still think for older gamers the game won’t be a real challenge at any stage, even if you’re trying to ace the optional puzzles and races, it does stop it from becoming boring.

Similarly, a new system that lets you upgrade your copy abilities when you earn enough stars and find the right blueprint is a good way to encourage exploration – and some of the upgraded powers are a huge amount more useful than their basic equivalents, too.

You quickly unlock a hub area where you can buy these upgrades, and it also plays hosts to a few optional minigames, none of which are likely to hold your attention too long, but the general sense of added value is a fairly persuasive one compared to thinner releases that the series has known in recent years.