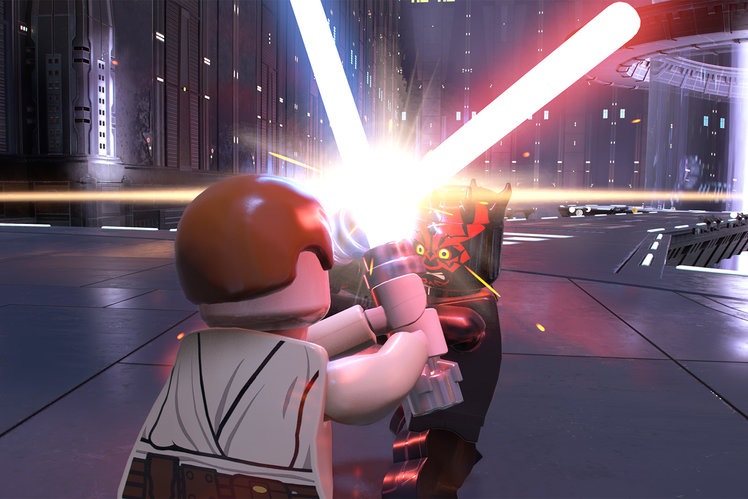 TT Games has been making Lego platformers for the last 17 years, starting with Lego Star Wars: The Video Game for PS2 and the original Xbox. Since then, it has produced numerous additional Star Wars episodes as full-fledged titles across multiple platforms, plus an extraordinary wealth of similar platformers based on other licences – Batman, DC Comics, Marvel, Harry Potter, to name just a few.

However, with so many games of a similar ilk released – over 25, in fact – the format and gameplay mechanics couldn’t help but feel overused. A reboot and rethink was long overdue, to be honest.

Now that’s exactly what we’ve got. And, what better way to kick off a new era of Lego platform games than by going right back to the beginning – hence, Lego Star Wars: The Skywalker Saga.

Not only does it give TT Games an opportunity to debut its new 3D platform engine, but we finally get Lego Star Wars games set on The Last Jedi and The Rise of Skywalker.

That’s because, as with the movies, The Skywalker Saga encompasses all three film trilogies we’ve been treated to so far. We get nine episodes in total, each running for an impressive four to six hours of gameplay (if you zip through them), and, as is the norm with Lego games, there is plenty of replay value thanks to secrets you can only unlock on a revisit. 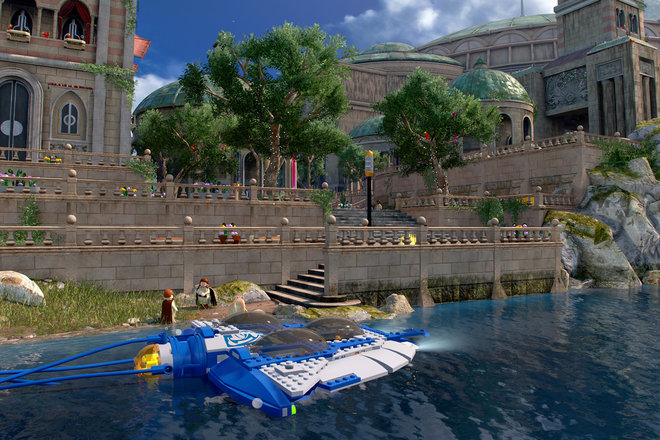 Impressively, you get to choose which trilogy you want to start with. From the beginning, you get the choice of kicking off the action with A Phantom Menace, A New Hope, or The Force Awakens. Completing each will unlock the next episodes in their respective trilogy.

Each episode also unlocks different planets and locations as you complete the story missions, which you can again revisit to grab collectables unavailable to you first time around. They are largely broken up into scenes and regions, with an open world type of feel to many of them. You can explore as much as you like too, as the story mission points give you an option to continue or not, so you can complete side puzzles, etc, before progressing.

As with most of the other Lego titles from TT Games, Skywalker Saga unlocks new characters as you complete missions, which can be necessary not only to complete puzzles in missions but some that were impossible at the time in previous areas. An astromech droid, such as R2-D2 is needed for a bonus puzzle Jar-Jar Binks’ homeland under Lake Paonga, for example, but you don’t have access to him until later in the game.

There are also starships to collect this time around, and special bricks that add an all-new element to this kind of Lego game – character progression.

As well as visual enhancements and a new third-person, over-the-shoulder perspective to the play, character traits can be improved through upgrades in this reimagined Lego outing.

Throughout the game there are Kyber bricks to collect, that can be traded for new overall abilities that affect all playable characters, but some for each type, such as Jedi abilities for the likes of Obi-Wan Kenobi and Luke, or Dark Side abilities for Darth Vader, Darth Maul and Kylo Ren. 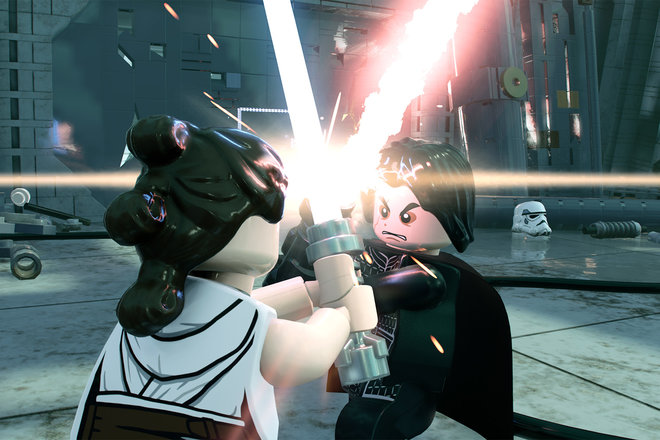 Upgrades also have three levels apiece, so will take a lot of Kyber bricks to fill to their maximum. Thankfully, there are stacks of them to collect throughout the game – some easy to find, others more difficult. And, as many of them cannot be gathered by the story characters you are given, the game encourages you to replay areas even before you’ve finished each episode, in order to give yourself a better chance.

In all honesty, Lego games have never been particularly tough as they are aimed at a wide age group. You can make this one a bit harder though, by turning off automatic health recovery, although you still respawn each time you die anyway and all you really lose are studs you’ve collected.

Still, that can be devastating enough if you’re trying to complete every objective in the game, so there is some peril involved regardless.

Combat, both on the ground and in space, has been greatly improved. While there is still plenty of button mashing to be had, there is a new combo system that is of particular benefit to Jedi characters. You can string together combinations of moves, that include different types of attacks, plus use Force push powers to give skirmishes more fluidity than ever before.

Of course, this is a Lego game so it doesn’t result in a Soulsborne experience, but it’s nice to have more options to keep things interesting. 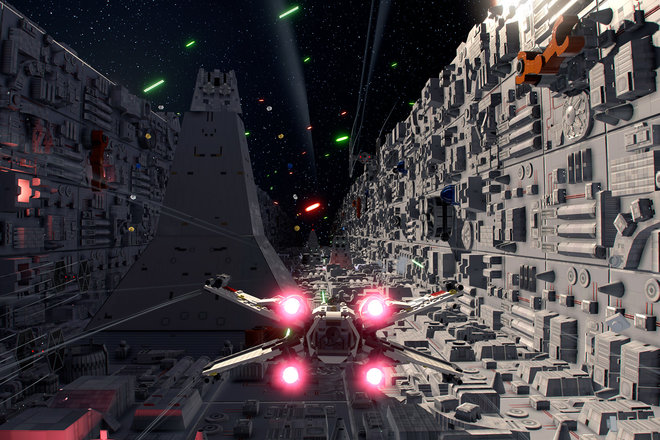 Gunplay is improved too, with a cover system now important during firefights and directional shooting. It’s more intuitive and interactive for sure, with set pieces feeling more like a Star Wars game than a Lego one of yesteryear. Then there are space battles, with dogfights and ship control being similar to the likes of Star Wars: Squadrons, albeit greatly simplified.

Certainly, there is plenty to do in The Skywalker Saga way beyond the puzzles and platforming we’ve come to expect from the series, and that’s greatly to the game’s benefit. Plus, thanks to co-op play, family and friends can get in on the action too.

Perhaps most impressive of all is the new graphical presentation. We’ve mentioned the new perspective, which opens up the visual world of Star Wars, but the assets are all given a glossy touch up that look particularly great on the current-gen consoles.

We tested the game on PlayStation 5 primarily and some areas look particularly spectacular. The beginning of A New Hope is stunning, with the Empire’s assault on Leia’s starfighter resplendent with beautiful, shining interior surfaces and reflections aplenty. Lego characters and bricks too are wonderfully rendered. 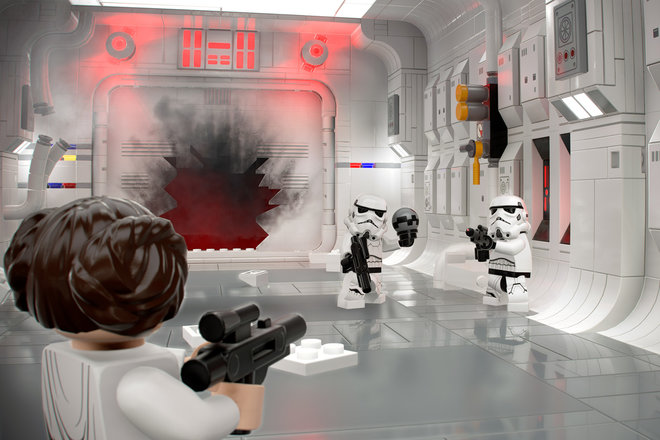 The game has the option to target 60 frames-per-second on PS5 and Xbox Series X/S or to set it at 30fps for a sharper experience. We much favoured the 60fps mode though, which is super smooth and seemingly more responsive. We’re not entirely sure if the resolution drops to cater for the higher frame rate, but it looks great either way.

As for the audio, the score is naturally excellent – this is Star Wars, after all – although there were times during our review build that some of the voice acting was recorded or captured in low bitrates. It sounds as if there’s a mix of voices grabbed from the actual movie soundtracks and some close impersonations of the original cast, but in the former case the sound quality can be at odds with the rest of the excellent audio work.

We do caveat this with the fact we played an early review build, so maybe that’s improved in a day one patch or the like.

Our only other quibble centres on the subject matter itself. We have seen the Star Wars stories retold so many times that it might just be our own tired indifference, but the humour doesn’t seem to be as punchy this time around. Lego games have often made us laugh out loud in the past, but we found the vast majority of cutscenes in this outing just mildly amusing.

That said, we’re pretty sure a younger audience will love the slapstick sight gags and silliness of it all.