If you’re looking for mainstream gaming, the Lenovo Legion 5i Pro definitely seems to cover all of the bases. Not only does it have powerful internals, but it’s got a 16:10 165-240Hz variable refresh rate display. That makes it great for gaming, but with the aspect ratio and the QHD+ resolution, it’s also great for work.

It comes with Lenovo’s TrueStrike keyboard, which is fast, and also feels soft to touch. If you’re looking for something that you can play games on at home and also bring to work, this is a great option.

Of course, if you’re playing in tournaments, this isn’t exactly designed for you, and you probably already know that. 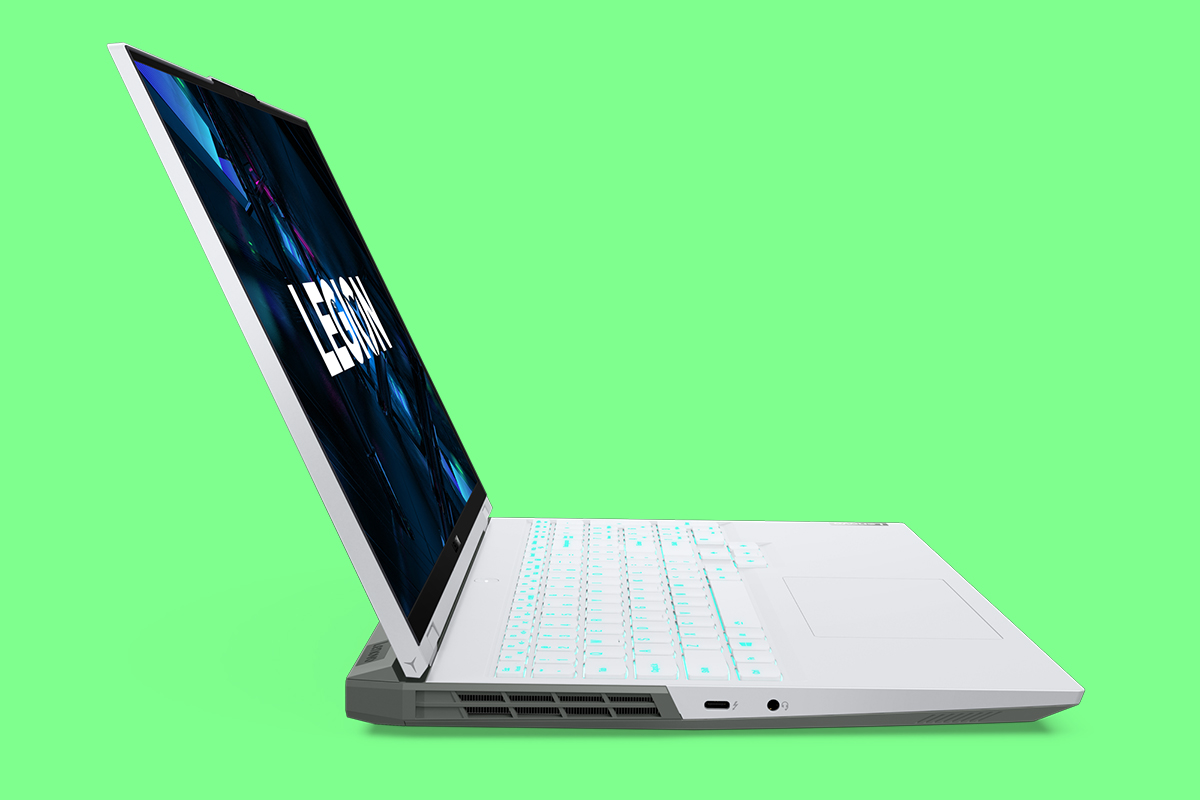 Lenovo’s Legion 5i Pro has a 16:10 165Hz VRR display, powerful internals, and more for an excellent mainstream gaming experience.

The Lenovo Legion 5i Pro, along with the AMD-powered Legion 5 Pro, was announced back in January at CES. It was supposed to start shipping a month later, but here we are and there are no listings to be found. Lenovo tells me that we should be seeing it any day now, but if you want an Intel-powered model, you’ll have to go 11th-gen for now.

The AMD-powered one uses Ryzen 6000, while the Intel-powered model uses 12th-gen ‘Alder Lake’, so whichever one you choose, it’s the latest generation. For graphics, you can get it with up to an Nvidia GeForce RTX 3070 Ti.

The design of Lenovo’s Legion laptops really hasn’t changed too much since the products second generation; however, this one is a bit different. Lenovo called this design “aggressive” in its reviewer’s guide. I don’t feel that way, but it is more aggress than what we’ve been seeing from Lenovo’s Legion line over the past few years.

The original line of Legion laptops – the Legion Y520, Y720, and Y920 (it was the only 9-series Legion, so it gets a mention) – was very flamboyant. If you brought one of those into a room, it was clearly a gaming laptop. The second generation brought a major redesign, with a flat top, fewer bright colors, and in general, it was just more subtle. The whole idea was that you’d be able to play games at home, but still be comfortable bringing it into work in the morning. 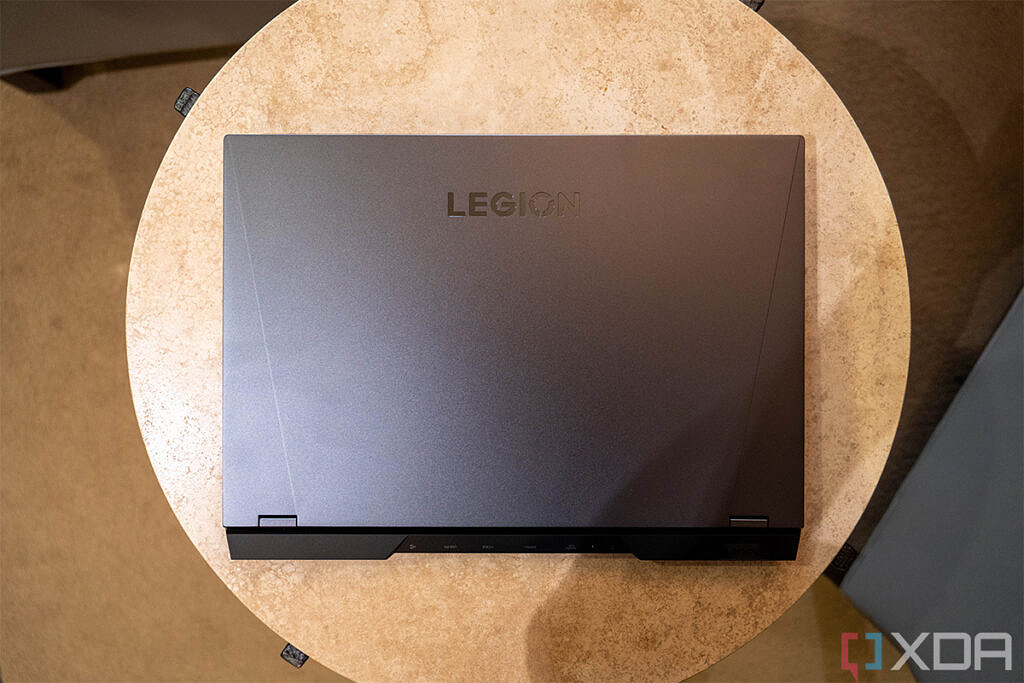 The Lenovo Legion 5i Pro brings back just a touch of that gamer-focused design. There are diagonal lines along the lid – which make the games faster, obviously – and a centered Legion logo. On the Legion 7 series, that logo sits in the corner. 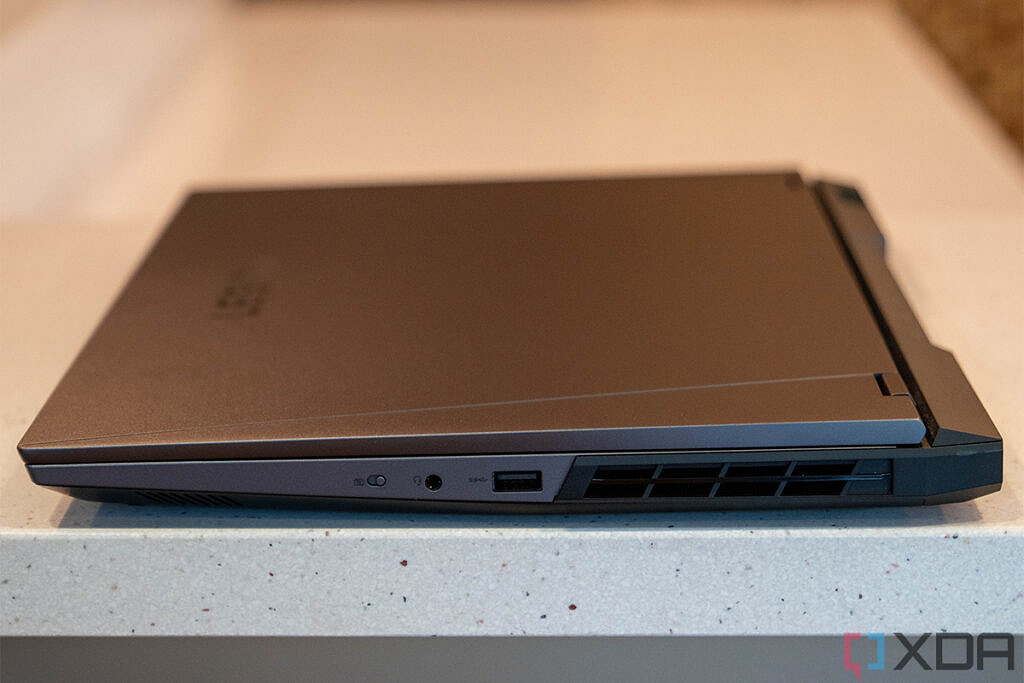 As for ports, there are lots of those. On the right side, there’s a USB Type-A port, a 3.5mm audio jack, and a camera shutter toggle. This USB port is where you’ll plug in peripherals that aren’t used as frequently. Also, the camera guard switch disconnects the camera internally, so there’s no actual physical indicator that it’s on. You’ll see an icon when you flip the switch, but that’s it. At some point, you will undoubtedly go to troubleshoot some issue where Zoom or something can’t find your camera, and you’ll realize that switch has been flipped. 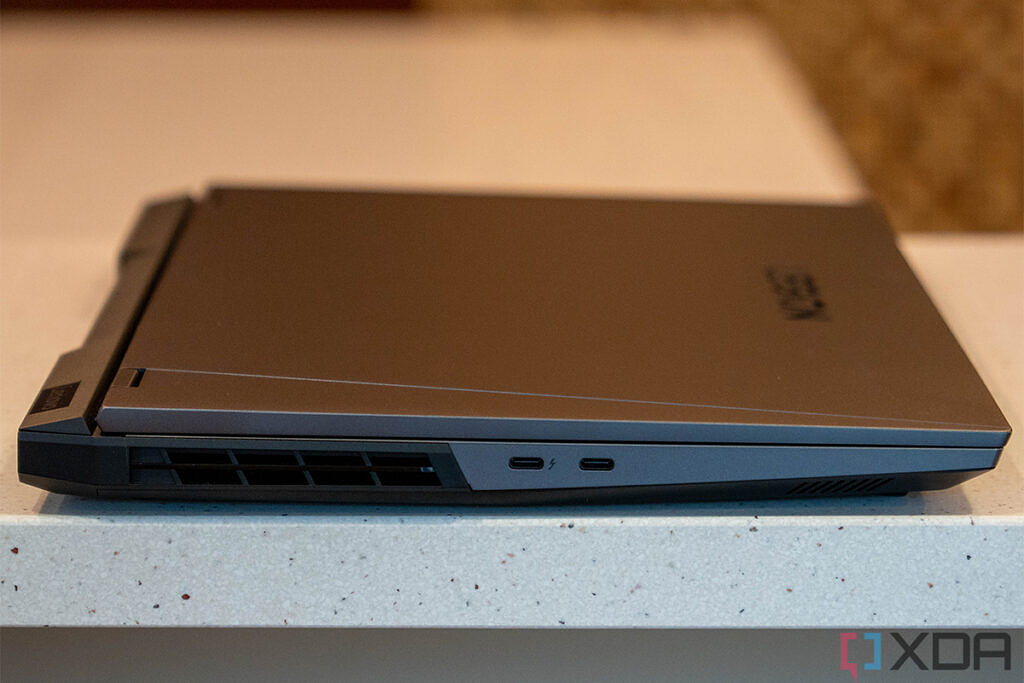 On the left side, there are two USB Type-C ports, one of which is Thunderbolt 4 and one of which is USB 3.2 Gen 2. As always, I’m not a fan of ports that look the same but provide different functionality, especially since they’re on the same side. I suppose you won’t be plugging in an external graphics card or anything, although you might want dual monitors. 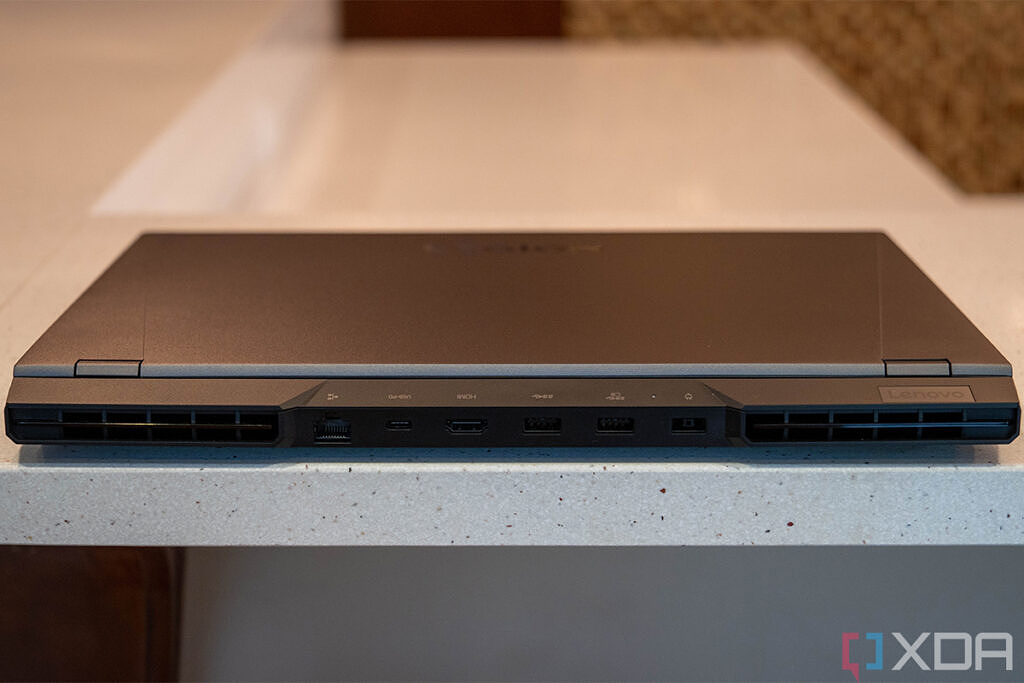 The rear side of the laptop is where most of the ports are located. They’re located there for cable management purposes, and you can use them for the things you’ll have plugged in all the time, like power, HDMI, and Ethernet. You’ll also find two more USB Type-A ports, and another USB Type-C port. The USB-C port actually supports power delivery, so you can use it to charge the laptop, albeit very slowly.

You’ll notice that the fans are in the corners, so they can blow air out through both the sides and the back. It’s a little design trick to blow out twice as much air. Lenovo also says that its ColdFront 4.0 cooling system is quieter, with fans that have 40% thinner blades. It can also push the CPU and GPU to higher levels using a dual-burn feature. And if that’s not enough, you can hit Fn + Q to toggle between performance, quiet, and balanced modes.

One of the cool things that we’re seeing from the gaming laptop market is higher resolution displays with high refresh rates. It used to be that if you wanted more than 60Hz, you had to compromise and get 1080p resolution. Indeed, I often say that competitive gaming is ugly, sacrificing everything in favor of frame rates. But luckily, QHD 165Hz panels are becoming more common, and the Lenovo Legion 5i Pro has a 16-inch 165-240Hz variable refresh rate screen. 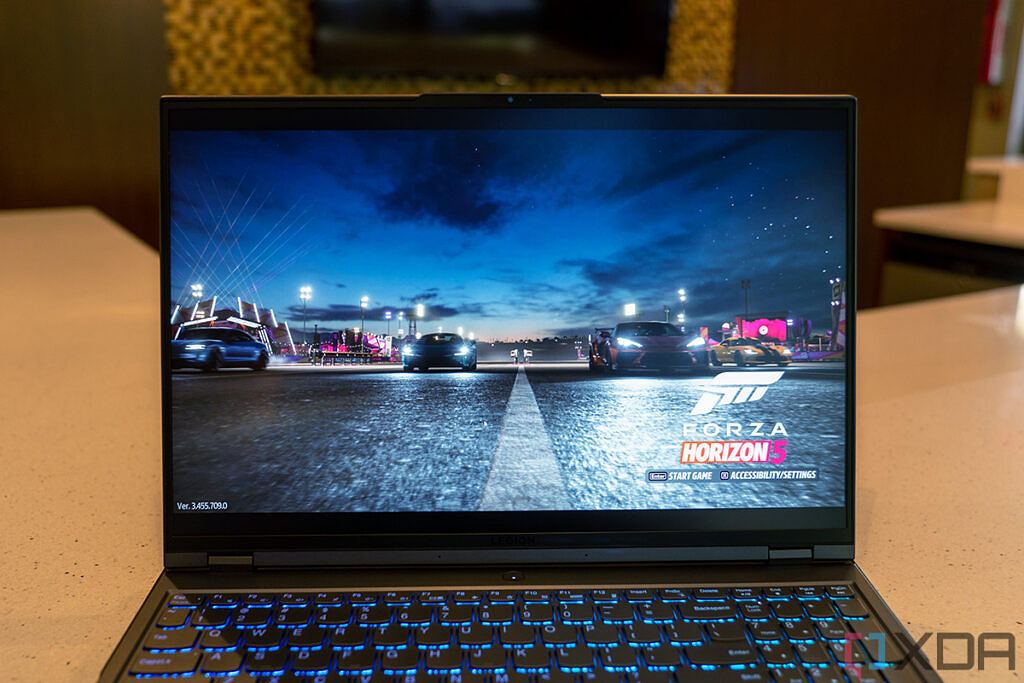 Naturally, the higher refresh rate gives you an edge in gaming, thanks to smoother animations. It absolutely gets you a few milliseconds over your opponent.

I’m going to guess that you still care about color gamut on a machine like this. Like I said, competitive gaming is ugly, but for a Legion 5-series type device, you probably still care about the screen at least being somewhat pretty. It supports 99% sRGB, 72% NTSC, 77% Adobe RGB, and 77% P3. It’s pretty average for a premium display.

It maxed out at 520.9 nits, exceeding the 500 nits that’s promised by Lenovo. The contrast ratio is 1,310:1, which isn’t quite as high as I’d like. With the numbers that we’re seeing here, this is definitely fine for a mainstream gaming laptop. If you’re buying it as a creator laptop, you might want to go with something that has a wider color gamut and a higher contrast ratio.

The webcam is located in the top bezel, using Lenovo’s reverse notch design. Unfortunately, the webcam is still 720p in an age where 1080p is quickly becoming the standard.

I really like the keyboards that Lenovo uses on its Legion laptops, which are called TrueStrike. They’re made for a softer landing, but also with snappy input. To me, that means a lot. With quick input, that makes it great for gaming, but at the same time, the softer landing makes it more comfortable and it even makes it quieter, something I appreciate when I’m writing articles. 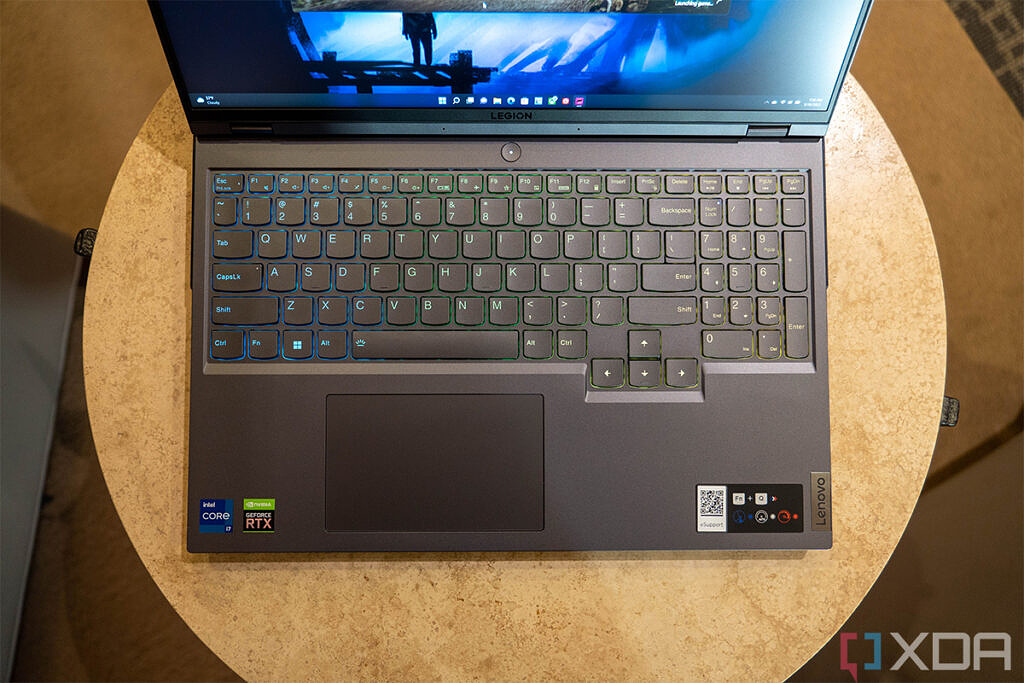 As you can see, it also comes with a full number-pad, which is great if that’s what you’re into. There’s also four-zone RGB lighting. Like I mentioned earlier, Lenovo reserves a lot of its RGB lighting for the Legion 7-series, so if you want per-key RGB lighting, that’s where you’ll need to go. 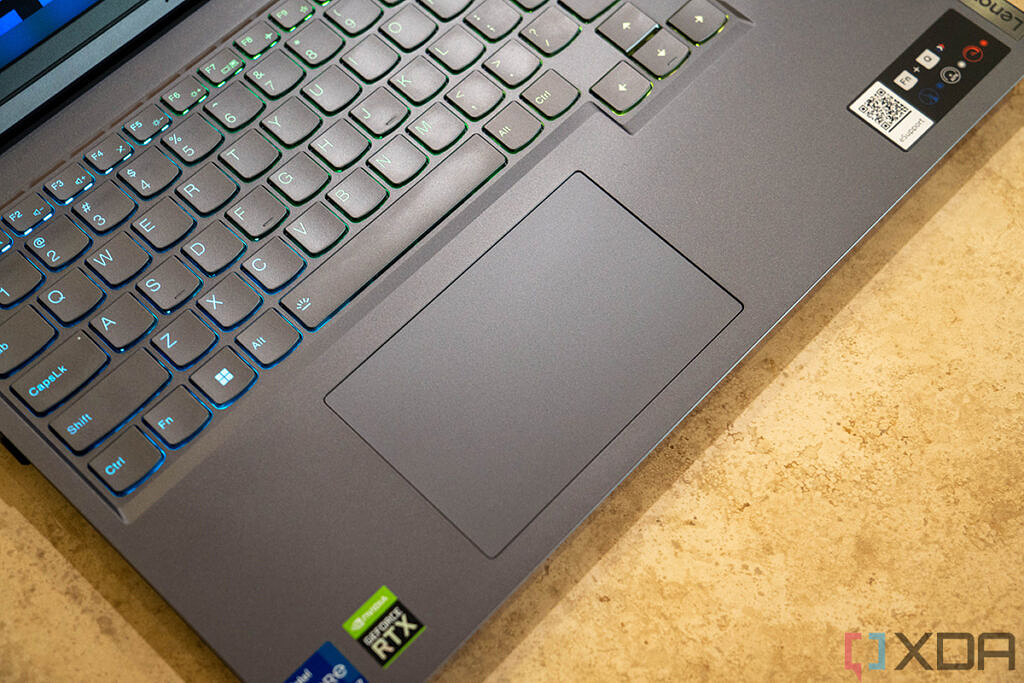 The touchpad has been enlarged. Lenovo isn’t doing physical buttons anymore, a feature that seems to be going away on laptop. I’d still prefer it to be larger, of course, making use of all of the available real estate.

Performance: It’s everything you can expect from a laptop 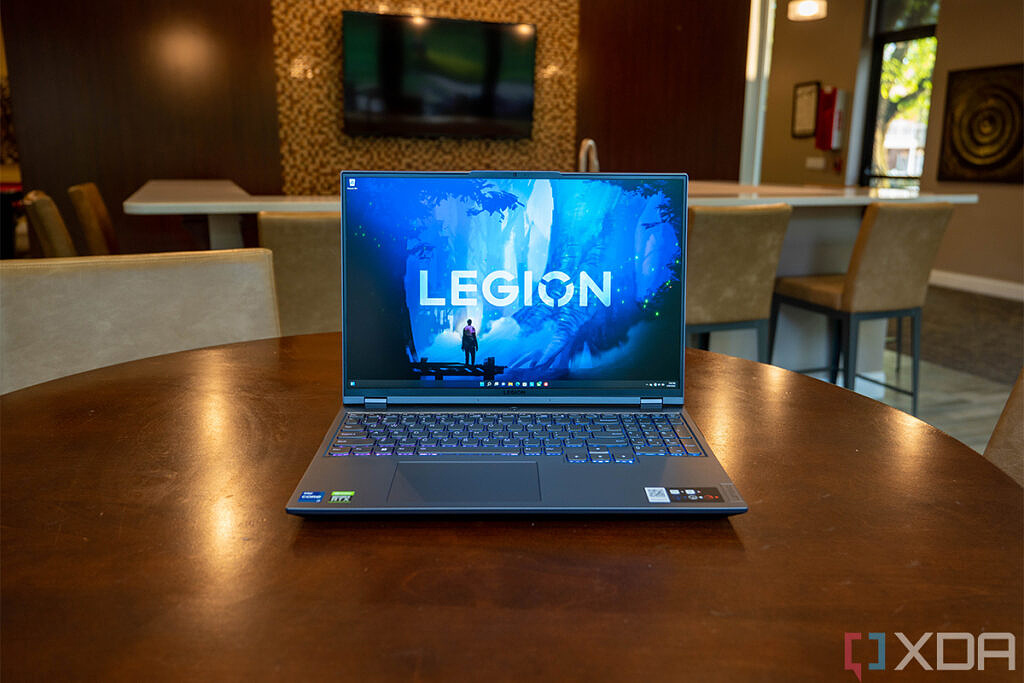 This model comes with a Core i7-12700H and a GeForce RTX 3070 Ti. While it’s definitely a solid configuration, it’s still mainstream. If you want to go heavy on being competitive, you’ll want an RTX 3080 or 3080 Ti. But as I’ve mentioned at other points in this review, at that point, you should look toward a higher tier of gaming laptop.

For benchmarks, I used PCMark 10, 3DMark, Geekbench, Cinebench, and VRMark. I compared it to last year’s AMD-powered model, along with a specced out MSI Raider GE76 from this year’s lineup.

I only tested the AMD model for last year’s, and for a comparable configuration, I’m surprised that the difference between the two is as narrow as it is. Of course, AMD processors are notorious for dropping performance when not connected to power. And of course, if you look to go super premium, the MSI Raider is about as specced out as it gets.

Based on the 3DMark tests, this PC should be able to achieve the following frame rates.

Battery life was about what you’d expect. I set the power slider to balanced and set the refresh rate to 60Hz, but still, the best I could do was three hours and 52 minutes. At worst, I got exactly two hours. This wasn’t while gaming or anything like that. It was just working. Naturally, I’d expect that you’d be plugged into power for gaming.

Obviously, the Lenovo Legion 5i Pro isn’t for everyone. If it was, it would be the only product that Lenovo makes.

You should buy the Lenovo Legion 5i Pro if:

You should not buy the Lenovo Legion 5i Pro if: