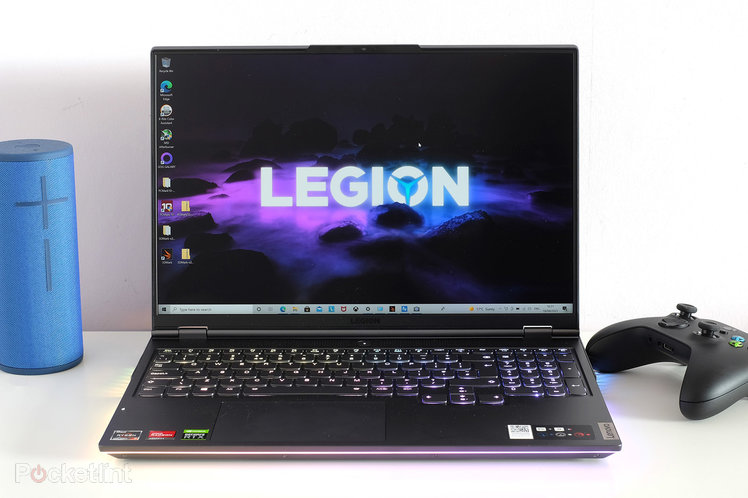 The Lenovo Legion 7 is a killer gaming laptop. It uses only the best components, including up to a powerful Ryzen 9 CPU and Nvidia RTX 3080 graphics card, and squeezes incredible performance from the latter.

It’s a ‘no cuts’ kind of laptop. That means you get an (almost) all-metal casing, high refresh rate screen, and neat touches like a textured glass touchpad, customisable lighting, and even speakers with a spoonful of bass.

We’ll cut to the chase: the Lenovo Legion 7 is great. However, we do think the Lenovo Legion 5 Pro is the sweet spot for most buyers, especially when the top-end Legion 7 is just so pricey – at well over two grand – but if you’ve got deep pockets and want better than great then it’s a sound option.

The Lenovo Legion 7 is a gaming laptop chameleon. One minute it can come across as a sensible workstation. There’s no giant light-up insignia on the back. The grey metal of the lid and keyboard surround are unassuming. Even the sensible font used on the keys will help avoid the rolled eyes of flatmates and co-workers. 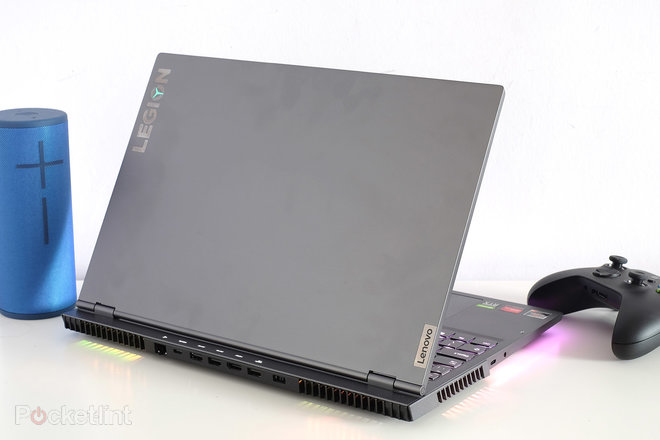 However, press a button and the conference centre becomes a wedding reception. The Lenovo Legion 7 has per-key keyboard lighting and a strip of LEDs that runs across the sides of the laptop, including the chunky heat vents.

You can choose from a whole stack of colours and animations using a preinstalled app, and programme your own. We found this part of the Lenovo Legion 7 a bit unintuitive, but it is at least easy enough to get the LEDs to display a consistent, single colour.

The look is more customisable than even the Legion 5 Pro offers. The 7 can therefore become even more of a wallflower, and embrace the RGB-lit style of gaming hardware in a way the step-down alternative just can’t.

However, the Lenovo Legion 7 is a heavy laptop, not the kind of computer we’d want to carry around every day in a rucksack. However, the footprint is manageable. Just look at the screen: there are no big borders on any side. And while the back extends a bit thanks to additional heat sinks and vents, there’s no way we’d choose to remove these. 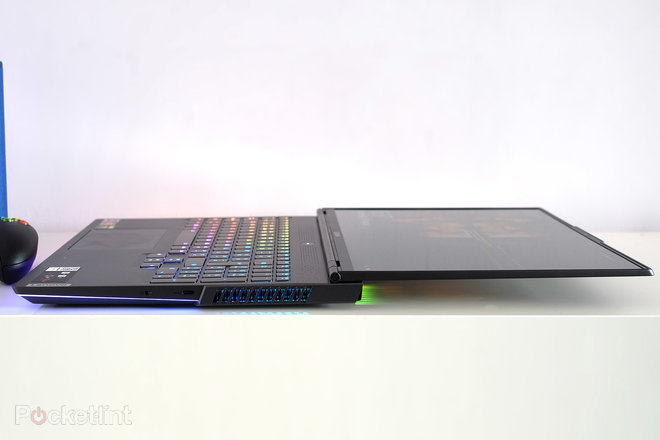 Its design is more flexible is another sense, though: the Legion 7’s display can fold back to 180 degrees, no the limited 130-odd degrees still common among gaming laptops. We’re not sure this is a must-have feature in a gaming laptop, mind, but it may be handy if you’re more interested in something you can use in work meetings too, where sharing what’s on-screen (in person, not over Twitch) may be essential.

The Lenovo Legion 7 seems to have the same screen we rated so highly in the Legion 5 Pro. It is not, as you might have guessed from the name, a 17-inch panel though. This is a 16-inch laptop, with a 165Hz refresh rate LCD panel.

It’s a class act in most respects, but its brightness stands out the most. This thing goes up to 500 nits. That is frankly much more than you’d want in a dimly lit room, but is perfect if you want a punchy looking image without drawing the curtains.

Colour is strong too, and that high refresh rate is an essential part of making the most of the powerful hardware on-board. It can correctly display frame rates of up to 165fps, where the average laptop screen still taps out beyond 60fps. 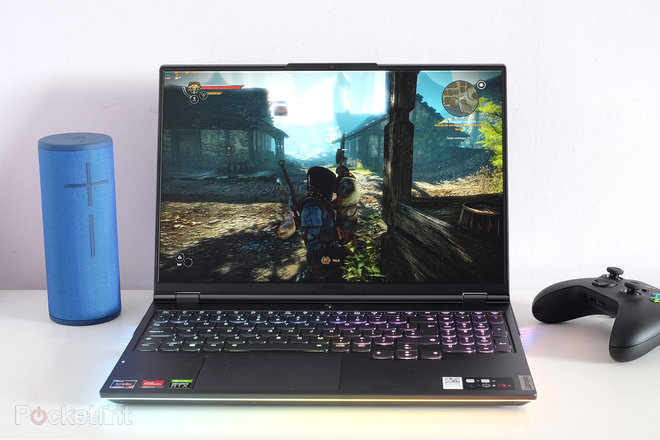 There’s one slight issue: black levels. This panel seems designed for high peak brightness over an ultra-deep black floor, and we find its raised blacks somewhat noticeable in a darker room. You can also clearly see the backlight shining through when you look at the Lenovo Legion 7 display from a severe angle.

While this isn’t a great issue in practice, because you’re likely to view the thing dead-on 95 per cent of the time, it’s a reminder that the laptop screen of our dreams is still an OLED or a Mini-LED, as seen in the latest iPad Pro 12.9. However, there are still extremely rare in laptops. Trusty old standard LCD is still the obvious choice if you want a high refresh rate panel, and this one more than does the job well in 2021.

The Lenovo Legion 7 also supports high dynamic range (HDR), via the VESA400 standard. However, despite the decent peak brightness you’re just not going to get brilliant HDR images from a screen with a somewhat elevated black floor. Again, some context is needed here. No gaming laptop has a screen particularly well-suited to HDR at the moment, and the “VESA DisplayHDR 400” standard is a bottom-rung HDR standard anyway.

The Lenovo Legion 7 has a crisp keyboard with a NUM pad to the side. It offers good feedback and a fast feel, but we can’t help but notice it is a little shallow compared to some of the other top-end gaming laptops. That includes the Legion 5 Pro, which has much deeper keys. We prefer the cheaper model for typing and, perhaps to a lesser extent, playing games. So if this key trimming was necessary to shave a few millimetres off the case thickness, we don’t think it was worth it. 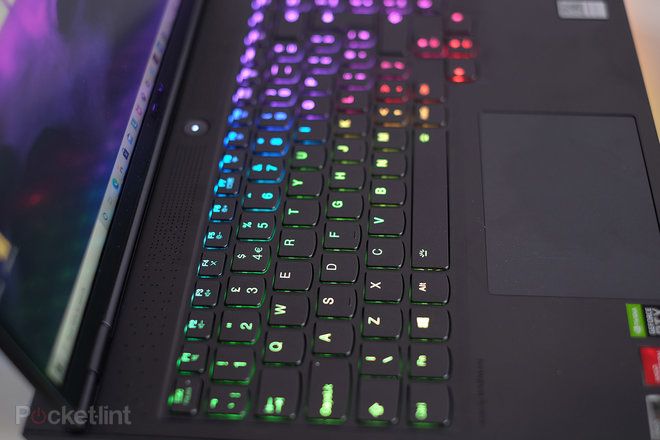 However, it does have the per-key lighting system you miss out on in the Legion 5 Pro. The software it uses is way more involved than the average too. We’re still learning how it fully works, but the on/off keyboard shortcut doesn’t just turn lighting on or off, but shifts through a series of presets.

This makes creating and using wildly different settings for games and apps less clunky. You can do the usual RGB wild stuff, like having a lighting effects that react to sound playing, and have light rings that spread out from pressed keys like water rippling away from a droplet in a still pond.

The Lenovo Legion 7 mostly has a great keyboard, we just wish the action were a bit deeper.

There’s a much less controversial upgrade to the touchpad. The Legion 7 has a textured glass pad, which feels much smoother than the Legion 5 Pro’s plastic one. This is a significant benefit for work use, but we would always choose to use a plug-in mouse for gaming. 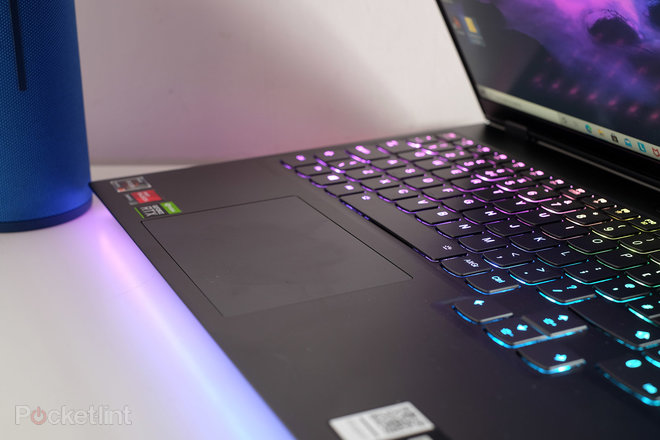 And not just because most gamers think touchpads are universally awful for play. The Lenovo Legion 7’s pad is substantially offset to the left of the surround because of the NUM pad, and it puts your arms in a much less comfortable position. We’d also suggest modifying the pad’s behaviour in Windows 10 to avoid accidental ‘right button’ presses, if you’re not accustomed to one of these leftwards-nudged pads.

The Lenovo Legion 7 is a superb performer – and not just because it has top-quality hardware inside. But let’s start with the roll-call. 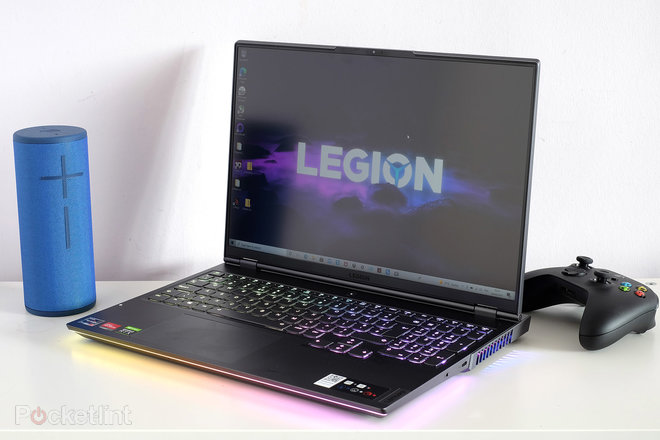 When we saw this thing had an RTX 3080, we were almost a little worried. This is an extremely powerful graphics card, and the Lenovo Legion 7 really isn’t all that thick by design. Could it really keep up without lowering the GPU’s power or making the laptop’s metal frame uncomfortably hot?

The real-world experience is almost bafflingly good. Not only can the Legion 7 feed the graphics card 160W of power, maxing out the potential of this laptop variant, we are seriously impressed by how little fan noise it generates under pressure.

The Lenovo Legion 7 only creates a fraction of the noise of the slimmer Acer Triton 300 SE, for example. And that is when using the Legion’s ‘Performance’ profile that enables the fans go wild in order to tease the most frames per second possible out of your games. 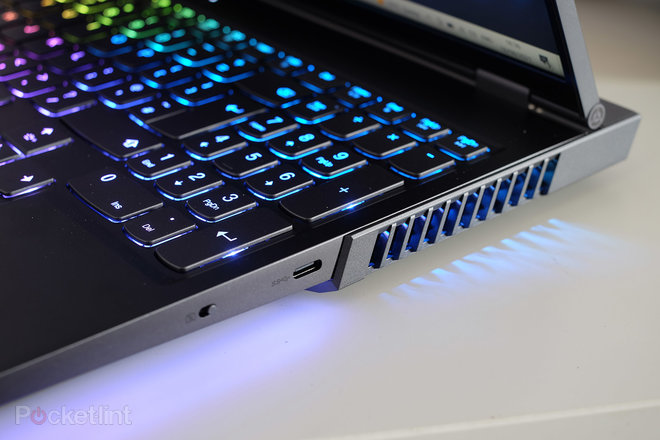 Whatever fan system Lenovo uses here, it works. Putting a hand to the outlets you can feel a healthy flow of warm air, while avoiding distracting higher-pitch noise or rotations-per-minute yo-yo’ing that also draws your attention to the fans. It seems to be a better fan system than the Legion 5 Pro’s – and that one impressed us too.

The Lenovo Legion 7 is a gaming laptop that can play pretty much anything, at its native 1600p resolution – if with a little help from performance-boosting features like DLSS. It has a great graphics card, and a great implementation of that card from Lenovo. The company really has nailed these latest Legion laptops.

However, you should bear in mind the increase in performance over laptops one step down is fairly expensive. You’re looking at a 15-20 per cent boost in frame rates over the Nvidia RTX 3070, which is available in much cheaper laptops like – you already know what’s coming – the Legion 5 Pro. 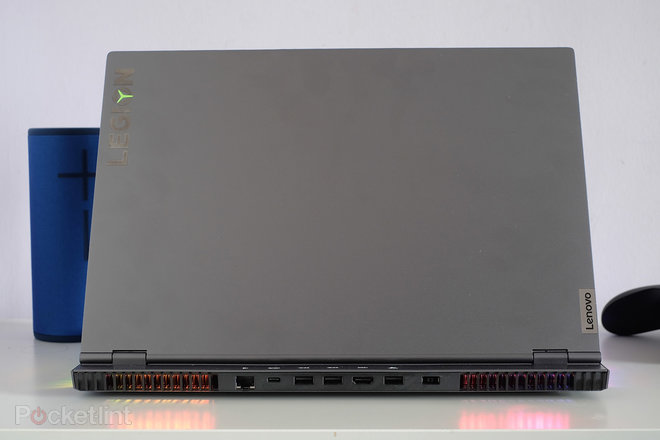 There is another upgrade here, though. The Lenovo Legion 7 has speakers with at least a hint of bass. Some much thinner lifestyle laptops still have far better speakers than those seen here, but the Legion 7’s remain a cut above the gaming laptop average.

We do find the area right in front of your face/head sounds quite empty, though. It’s as if the sound field is lacking a central channel because the speaker array is more concerned with pushing audio out to the right and left extremes to make it appear wider and more immersive. You can tweak this a bit with the Lenovo Legion 7’s Nahimic sound processing software, but it seems to be a fundamental part of the speaker arrangement, with none of the sound coming up through the keyboard.

The Lenovo Legion 7 has an 80Wh battery. While this is a higher capacity than many ultra-portable laptops that need to last a long time, we’re still a way off the 99Wh used by companies that want to max-out battery size (anything more and you wouldn’t be allowed to take such a device onto an aircraft). 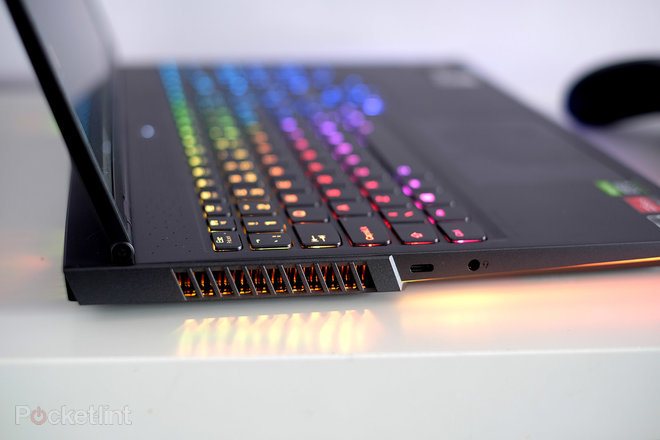 According to our testing you should not expect the Legion 7 to last more than five hours. It was almost dead on that duration when playing a video stream in its battery saver mode. This is a way below Lenovo’s eight hour claim.

Battery life just isn’t a top consideration of the Lenovo Legion 7. But performance is. Which also means the Lenovo Legion 7 needs a hefty power brick, further adding to the weight if you plan on taking this laptop anywhere. Granted, it’s reasonably slim ‘brick’, but weighs an additional 866g.

Even the Lenovo’s connections layout is designed for a semi-permanent desktop-style setup. Most of the connectors are arranged along the back, and their icons light up so you won’t necessarily need to turn the laptop around when trying to plug something in. Neat.

A full-size HDMI 2.1 connector, Ethernet port, a USB-C, and three USB-As are lined up along the rear, alongside the power connector. Only one USB-C port sits on each side, and there’s a headphone jack on the right. This layout is intended to let you keep your workspace nice ‘n’ tidy. 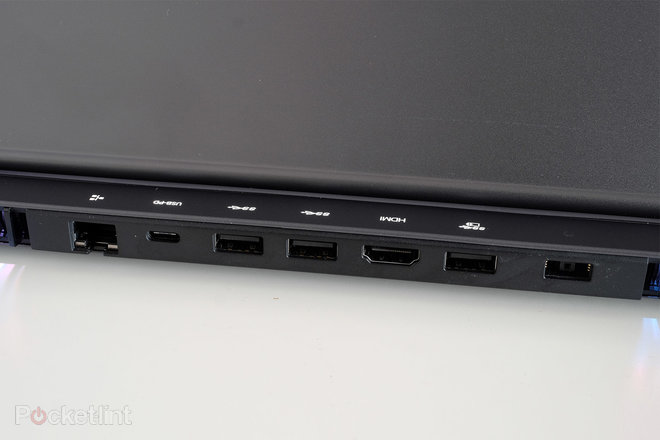 None of the USB-Cs are Thunderbolt 4 connectors. You can get this standard in the Legion 7i, the Intel version, but when it costs even more money with the top-end Intel Core i9 CPU, we think this AMD variant is the better buy.