In a world where a smartphone is charging on every nightstand, the humble alarm clock is a bit of an antique. Or is it? Lenovo certainly doesn’t think so with its now second attempt at a smart clock that’s part smart speaker. The first one, the Smart Clock Essential, came with Google Assistant. The sequel makes the switch to Amazon’s Alexa voice assistant.

That makes it less of a proper sequel, more like a spin-off. If you own and love the original and you use Google Assistant, you don’t necessarily want to get this one. And you don’t need to, either. Despite an updated design, the two devices remain simplistically similar. But if you prefer Alexa over Google Assistant, as I do, it becomes a more attractive proposition.

The obvious use case is in the bedroom, a modern take on the classic alarm clock. But in essence, this is an Amazon Echo at heart, albeit made by Lenovo. So you can use it anywhere you like, and for more than just telling the time. 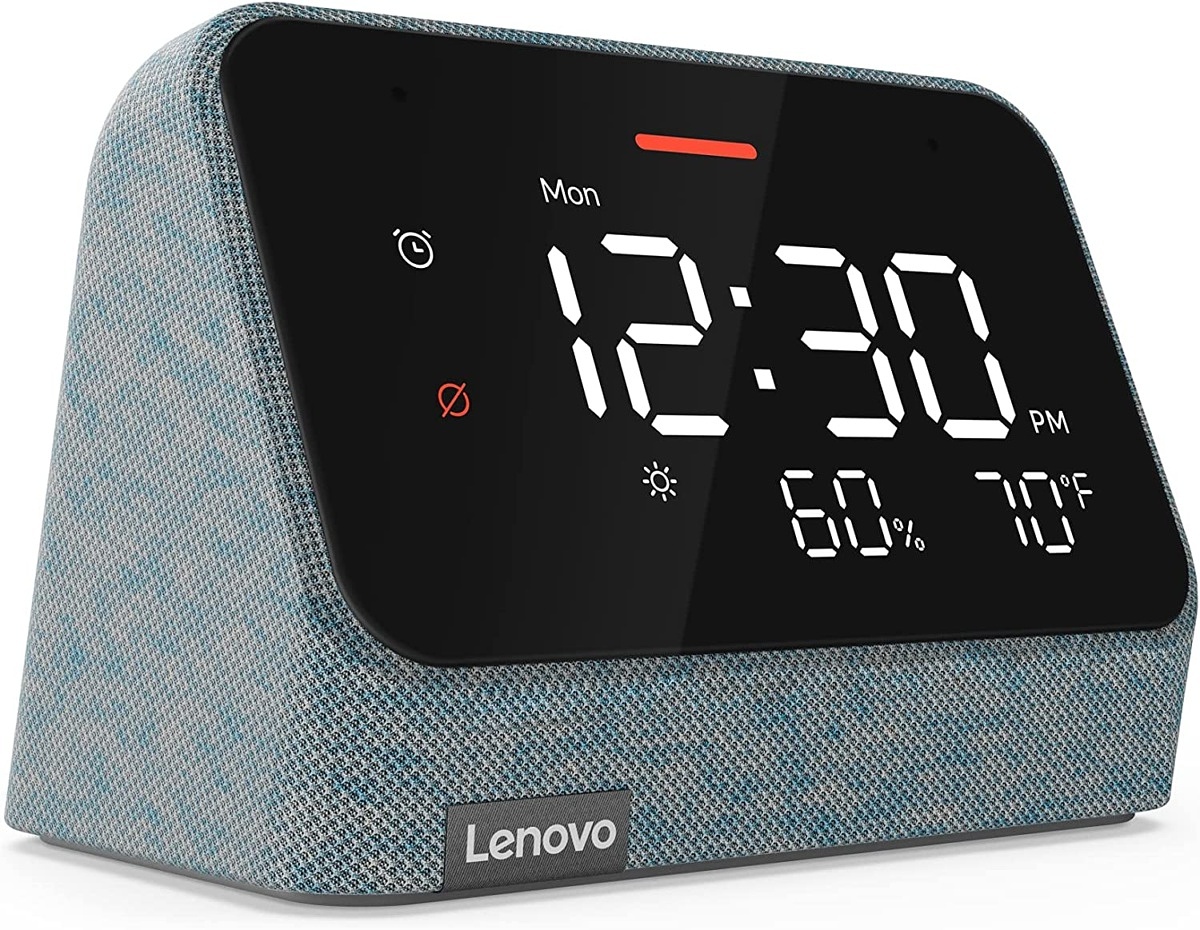 A modern take on a traditional alarm clock with the added power of Alexa. And no camera so it’s perfect for the bedroom.

About this review: This review was written using a Smart Clock Essential with Alexa provided by Lenovo. At no point has Lenovo had any input on the content of this article.

The Lenovo Smart Clock Essential with Alexa is available to purchase now from Lenovo directly and other third parties such as Amazon. The regular price is $69.99, though there are frequent deals that have taken as much as $25 off that.

It comes in two colors; Misty Blue and Clay Red. 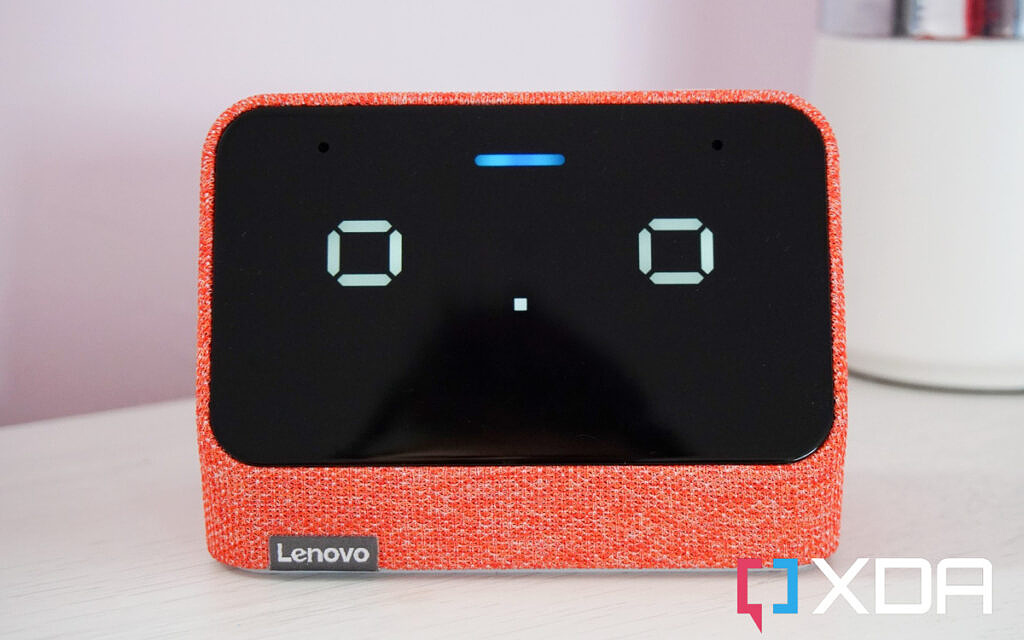 I bought and lived with the original Lenovo Smart Clock Essential. It was great. Exactly the type of smart device I’d been looking for to put on my nightstand. The key to that was not having a camera or a full display. I wanted to be able to see the time through half-open 6.30 a.m. eyes, play music, and ask the usual basic smart speaker questions. For me, the only drawback was a preference for Alexa. As a result, rather than using two assistants in the same house, I ended up replacing it with the Amazon Echo Dot with Clock. As a nightstand device, I like the Echo Dot less than I like the Lenovo Smart Clock Essential.

The best part of this new Smart Clock Essential is that all the good bits remain. All the reasons you would choose it to go on your nightstand are still here. The clock is large and easily legible through sleepy eyes. There’s no camera, the physical controls are easy to feel around for and it doesn’t have a touch screen. It’s simple. And thankfully Lenovo kept that simplicity. 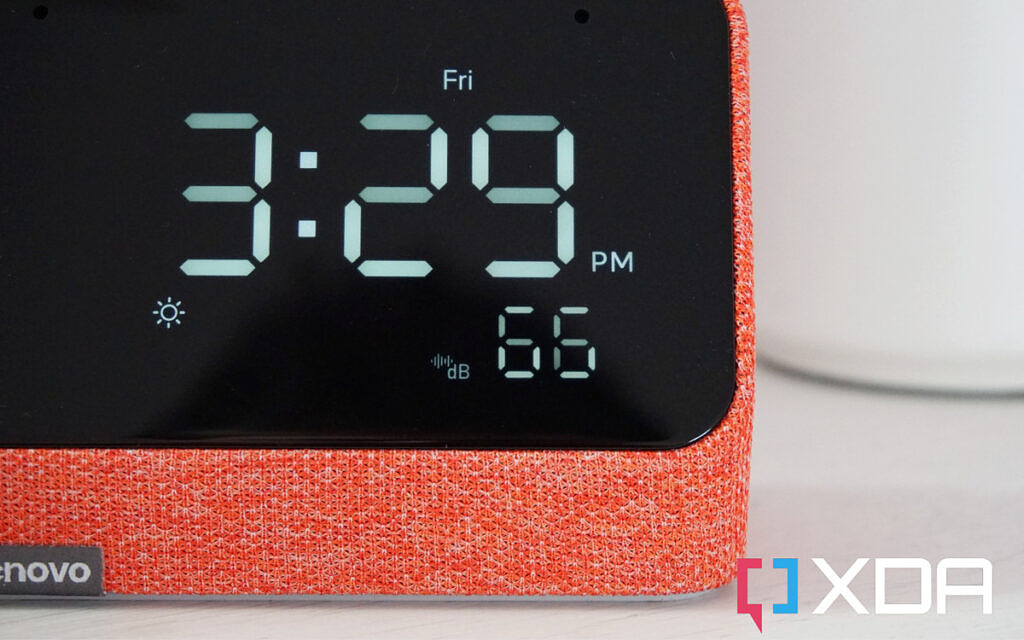 Despite not having a full-touch display, the Smart Clock Essential is a little more advanced than the clock-toting Echo Dot. You get a little more glanceable information, including the current weather conditions temperature, and humidity, saving one more morning question for Alexa. It even has a rudimentary decibel meter. The display also has an auto-dim feature, so at night you’re not going to be lighting up your bedroom. In this version, that display is trimmed with a redesigned housing that makes it a little bigger than the old model, but hardly large. It’s still going to take up less room on your nightstand than an Echo Show 5 or a Google Nest Hub. It comes in two colors, blue or red, trimmed in fabric.

The hardware controls all live along the top edge and it’s the usual fare. You get hardware volume controls, an action button to trigger Alexa, and an alarm button. This is an important feature retained from the original model, after all, it’s an alarm clock. You can use your phone or you can use the button. And silencing the alarm with your voice works just the same as on any Amazon Echo. The only hardware control not on the top is the mute switch, which is awkwardly placed on the back by the power input. You won’t accidentally activate it, at least, but you can’t just roll over and tap it. 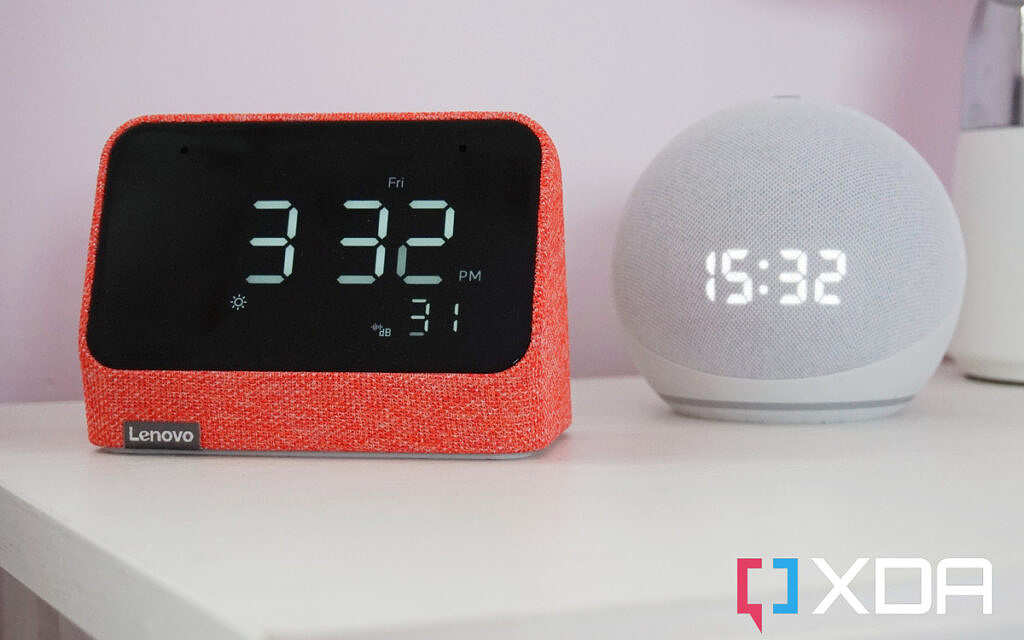 The sound quality is good, though if you’ve used the latest generation Echo Dot you might be a little disappointed. For what it is though it’s not bad and certainly loud enough to wake you up with your favorite tunes. Being an Alexa device, it has the same setup process using the Alexa app as an Amazon Echo and most of the same benefits. The setup isn’t quite as seamless, and it’s not made immediately obvious that you have to choose “clock” not speaker. It’s also a little disappointing that some of the custom Amazon Alexa alarms, like The Grand Tour, aren’t made available to the Smart Clock Essential.

There’s also no audio output on the Smart Clock Essential with Alexa. It’s not a deal-breaker for the type of device this is meant to be, but it isn’t an option to add some smarts to an existing home audio setup.

Who should buy the Lenovo Smart Clock Essential with Alexa 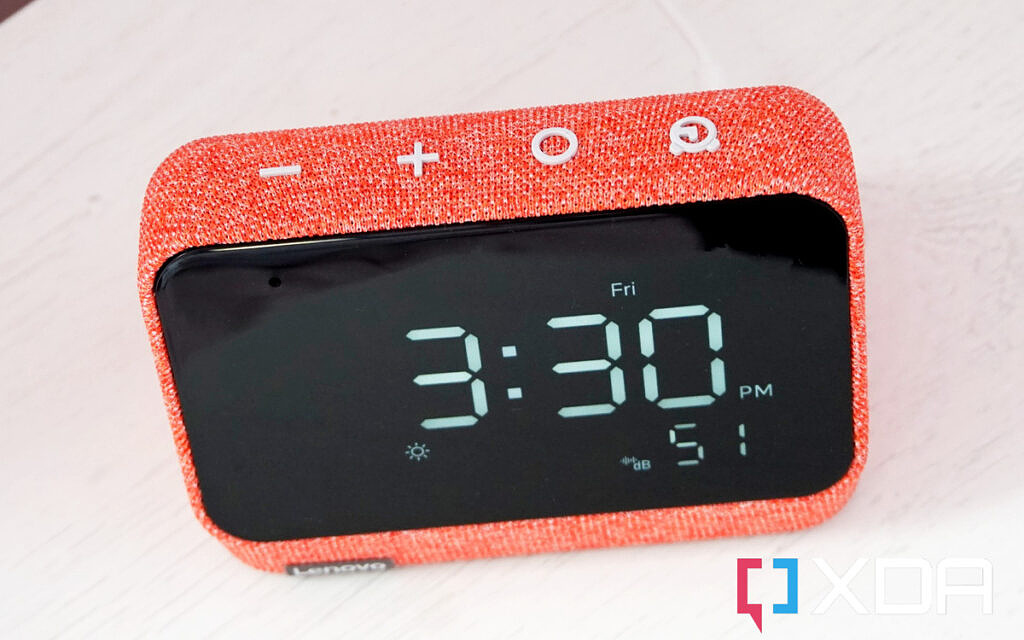 The Lenovo Smart Clock Essential with Alexa is a simple device and a solid alternative to the Amazon Echo Dot with Clock. As a device for a nightstand or even an office desk, somewhere you genuinely want a glanceable clock, it’s the better choice. The display gives you the essential information without becoming a distraction.

If better quality sound is important then the Lenovo falls behind a little, but it’s hardly a huge difference. Both have an excellent range on their microphones, too. And of course, if you prefer Alexa over Google Assistant, this is the one to get over Lenovo’s other model.

It’s a device that at first glance you might not get too excited for, but that does it a disservice. As an affordable smart speaker, it’s most excellent, especially if you’ve been looking for that perfect nightstand device that doesn’t have a camera.

The post Lenovo Smart Clock Essential with Alexa Review: The best smart speaker to put at the side of your bed appeared first on XDA.