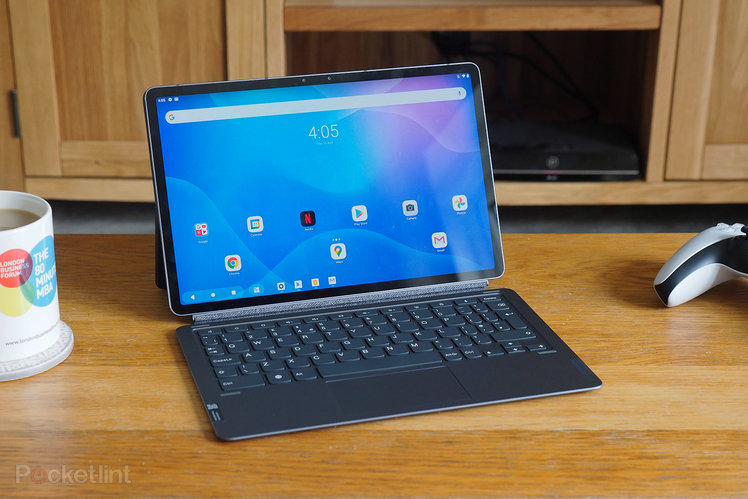 It’s rare to see a premium Android tablet launch, as the sector has largely slumped – or, at least, is pretty much owned by Apple’s iPad range – but Lenovo is fighting back with the arrival of its Tab P11 Pro.

This 11.5-inch tablet sits in the mid-to-upper section of the market, delivering a bright OLED panel, but also the versatility to add keyboard and stylus pen accessories to make for a more productive platform.

But with Android’s generally limited optimisation for tablets, can Lenovo’s Tab P11 Pro hit all the right notes as a tablet and more?

How you see the Tab P11 Pro may depend on how you wish to use it. Just a slate for watching Netflix and such like? No dramas, this is a quality option. As a laptop alternative? Well, you’ll need to invest in the additional keyboard accessory, adding a little to the expense, but still hitting a price point that’s likely in and around Chromebook territory. 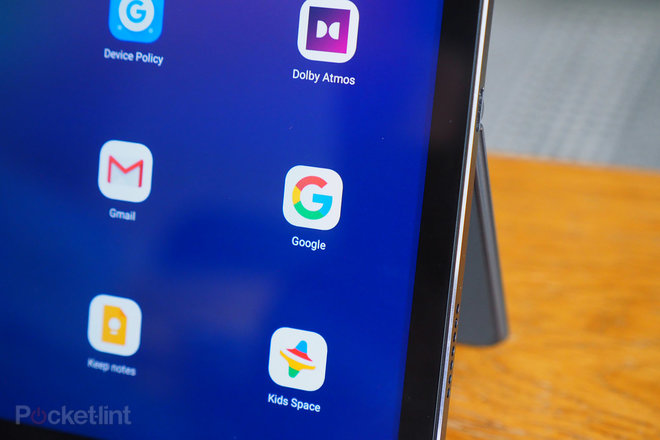 An 11.5-incher as your main screen ensures an uprated view compared to, say, a mobile phone; it’s also smaller than most 13.3-inch laptops and therefore more portable – albeit not quite comparable, given its Android software core (it’s just not as in-depth as Windows, nor as app rich, while it’s not even as word processing adept as a Chromebook alternative).

But as screens go this 11.5-inch panel is decent thanks to its OLED technology. This means each pixel self-illuminates – and it’s Full HD+, or “2K” if you prefer that term – so you don’t get any edge illumination or haloing around subjects. It’s just deep blacks, rich peak whites, and a very capable colour palette to fill in the gaps too. 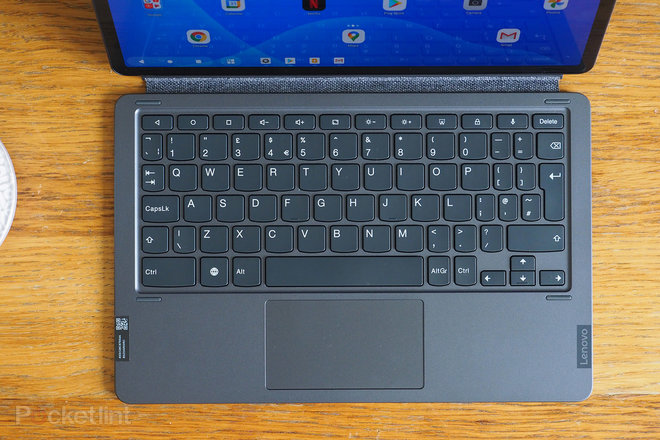 We’ve actually found the Tab P11 Pro really useful as a second screen for watching online press conferences while typing away on our laptop. An unusual use-case, sure, but each to their own scenario.

If you were to use this slate as an option for on-the-go streaming then it’s well appointed for the task. Available in either Wi-Fi only or Wi-Fi and 4G/LTE options, the ability in the latter to add in a SIM card means you could live-stream while on the move. That could be handy for all manner of use-cases, even for the kids in the back of a car on a long journey (if you’ve not been wise enough to pre-download for offline viewing). 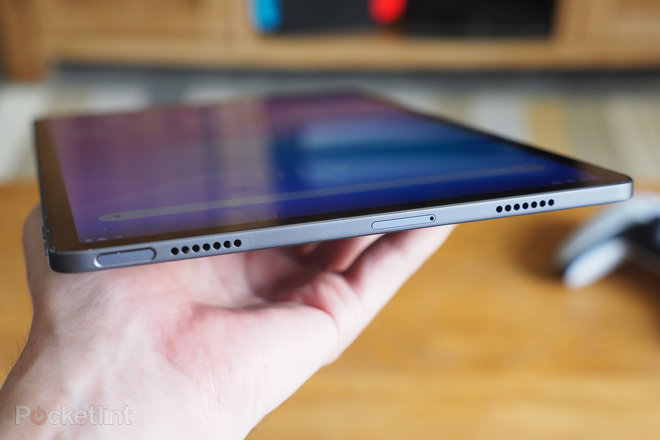 It’s a slim build tablet, too, at just 6.9mm it’s actually a slither thinner than many modern flagship smartphones. The build is rigid thanks to a aluminium frame, and well finished too, here shown in its “Slate Grey” finish.

The only oddity we find with the design is the positioning of the buttons. They’re to the upper left, which we’re sure left-handed folk will find a rare treat, but we’ve just found downright odd. Even the volume up and down buttons seem like they’re reversed. And the power button – which has the fingerprint scanner embedded within for quick login (although face unlock is the wiser option) – is tucked around the corner in a position that we find unusually awkward. 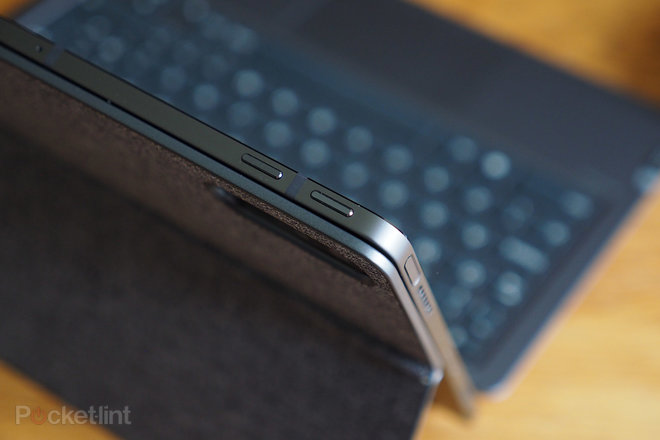 On the back the Tab P11 Pro boasts a “Dolby Vision Atmos” logo (they’ve started combining the Dolby Vision and Dolby Atmos terms then, eh?) and “sound by JBL”. At first we shrugged off these symbols, but Lenovo’s tablet is solid when it comes to audio – the quad speakers are loud and clear, projecting audio away in assured fashion. Enough to annoy anyone in public we’re sure, but also spot on for, let’s say, a bit of hotel box-set bingeing while on staycation.

At this point you’ll realise we’ve been addressing simple tasks: browsing, watching Netflix and the like. Android is pretty good at that, as it doesn’t really need to do much else. Problem is, when it comes to productivity, the larger-scale of a tablet screen still isn’t well handled by Google’s software. Even portrait and landscape auto-rotation messes with the layout.

This isn’t entirely Lenovo’s fault: Google still needs to put the work in to get Android up to tablet/laptop-replacement levels. Because it’s just not there right now.

As a slight workaround the likes of Productivity Mode go for a more Windows-like layout, complete with taskbar presenting open apps, but with the keyboard accessory attached there’s just not got the correct kind of engagement about it – largely because the little trackpad has a weird ‘float’ sensation about it that’s harder to control than the norm, and the ‘board itself has a hollow feeling that’s not especially great to type on.

But there’s the positive spin to look at: the backplate – which comes included with the keyboard and clips over the rear of the tablet – has a great multi-adjustable stand that suceeds in laptop-a-like transformation rather well. It could be a bit more rigid though. And if you’re typing with the keyboard flat on a solid surface, such as a desk, it’s not too bad – although that “hollow” sensation is hard to shake, meaning it just doesn’t quite hold up as that kind of device for us. 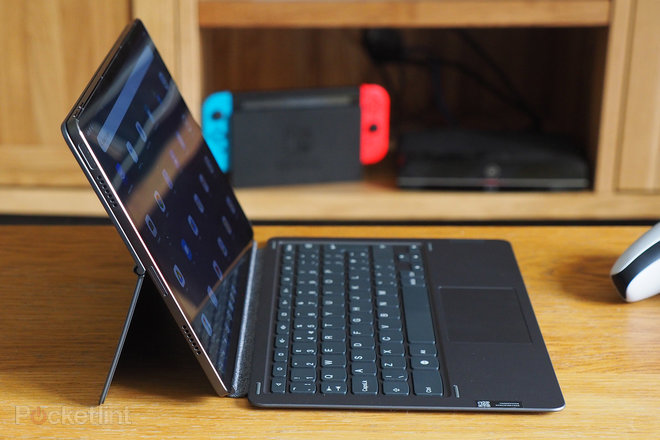 In terms of capability the Qualcomm Snapdragon 730G platform on board is the mid-to-high tier processor in the chip-maker’s range, so if you think of the P11 Pro like a giant phone then it delivers strongly. You can play Android games no problems. Navigation is swift. Connectivity is, again, much like a mobile phone.

That chipset also plays pretty nicely with the 8600mAh battery on board. Keep in mind that a flagship phone typically has a 4,500mAh battery, the extra almost 50 per cent on offer here is good enough to negate that extra screen real-estate’s illumination. Longevity is slightly different for a tablet for the simple fact you’re more likely to be engaged in longer periods of screen time that with off-and-on use like with a phone, but we’ve been getting around 12 hours of streaming before the Tab P11 Pro’s battery is under threat of calling it a day. That’s pretty good going.