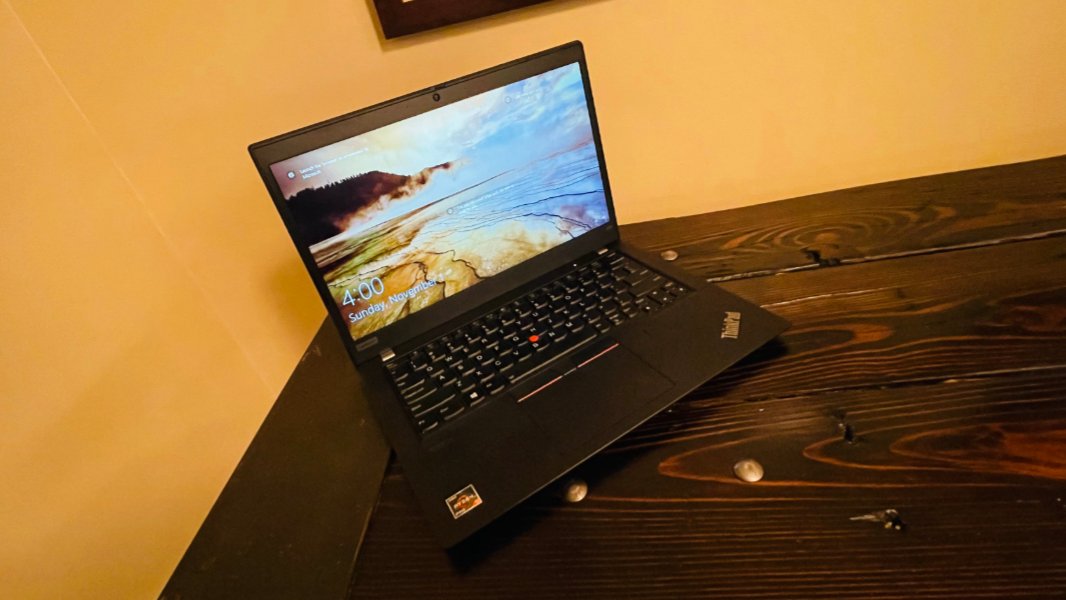 For all the terribleness of this pandemic year, 2020 has had its share of positives, too. Key among them is an industry-wide embrace of less expensive personal technology products that deliver great value. We see it in smartphones like the Apple iPhone SE and Google Pixel 4a/5 handsets. We see it in smart speakers like the Google Nest Audio. And now, thanks in large part to AMD finally getting its act together, we are seeing it in PCs, too.

In an earlier review, I described the AMD-based HP Envy x360 13 as the best portable PC you can buy for less than $1000. That was certainly true when I wrote that at the height of summer, but it’s fall now, and the HP predictably has some competition.

Key among that competition is Lenovo, which is bringing its vaunted ThinkPad X series down-market courtesy of the fantastic AMD Ryzen 4000-series chipsets. And yes, that means these laptops are significantly less expensive than the 14-inch X1 Carbon series, while delivering on much of what makes those laptops—and other ThinkPads—so special. That said, Lenovo also made some concessions to arrive at a starting price under—well under—$1000.

If you’re at all familiar with the ThinkPad family of products, you know the drill: ThinkPad is all about a perfect blend of form and functionality, with an admitted emphasis on the latter. That said, I really like the all-business ThinkPad design, which I feel is classic and timeless. 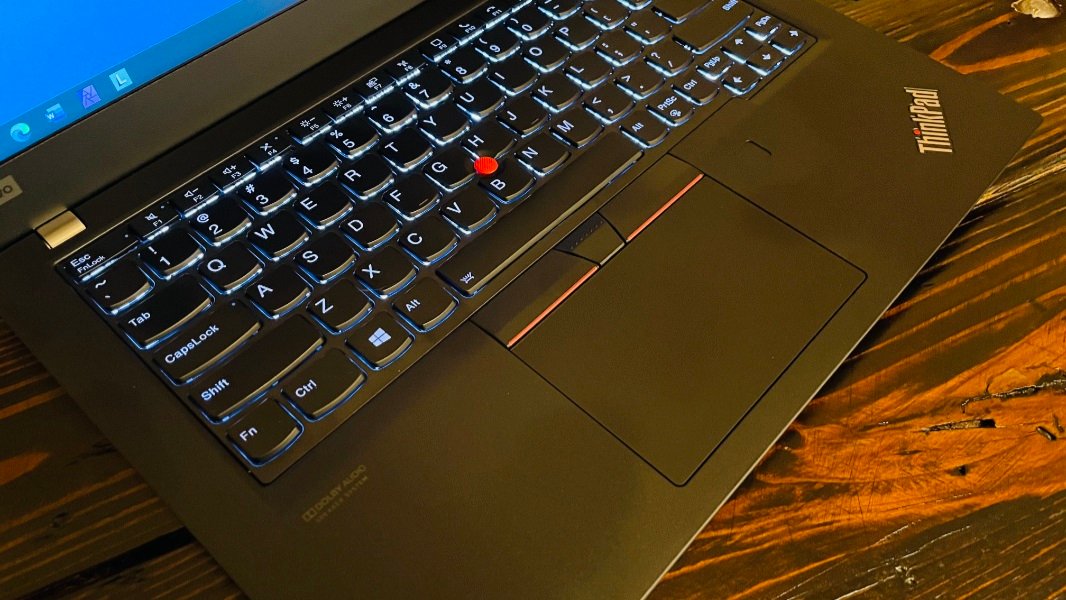 The X13 earns its X by using the same carbon fiber and magnesium alloy materials found in the more expensive X1 series, and it of course includes the vaunted, scalloped keyboard and dual-pointer system that fans expect as well. I’d be hard-pressed to tell at a glance that this wasn’t an X1 but for one unfortunate misstep: The 13.3-inch display is floating in incongruously large bezels on all sides. They’re so big, I’m curious why it doesn’t just have a 14-inch display. So there’s your first concession to price.

The display on the review unit is, fortunately, serviceable: It’s a 13.3-inch Full HD (1920 x 1080) multi-touch panel that outputs a decent 500 nits of brightness. But be forewarned: The entry-level X13 model actually ships with a 1366 x 768 display that would have been unacceptable several years ago let alone here in 2020. I don’t know what Lenovo is thinking there, and I’m surprised there isn’t at least a 1440p option of some kind. Let’s chalk both up to concession number two on price. 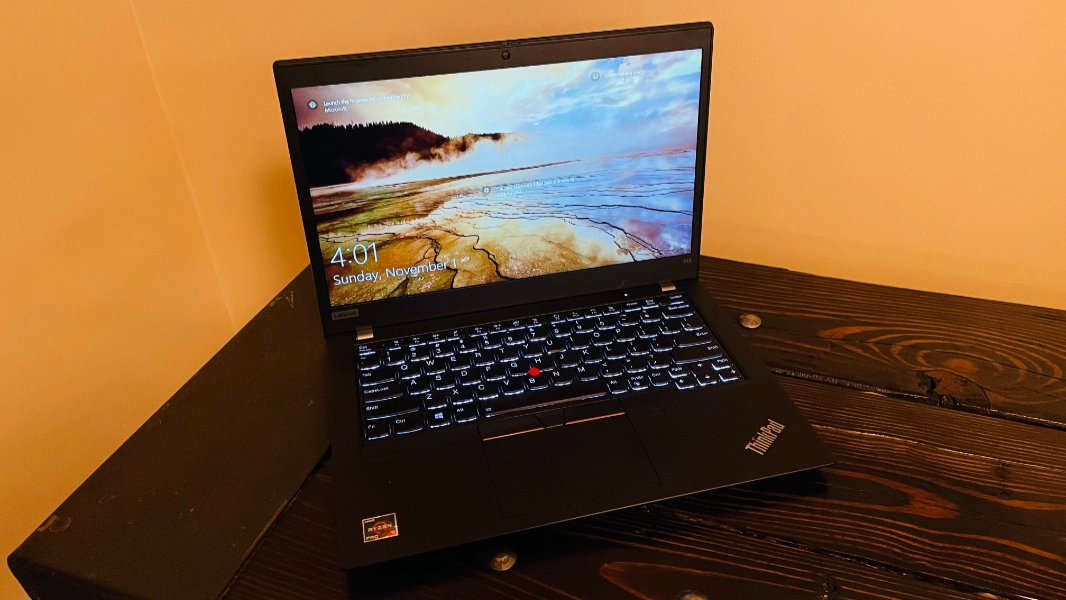 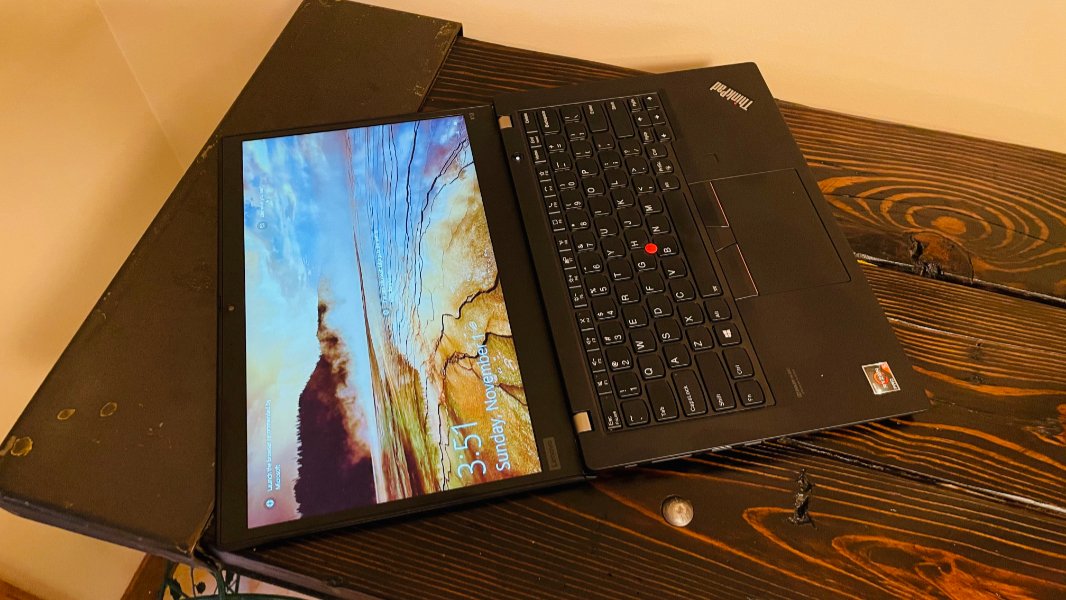 The Lenovo ThinkPad X13 comes in both AMD and Intel variants, and the AMD versions are less expensive and, I think, the better choices. There are three possibilities: The 4-core Ryzen 3 Pro 4450U found in the base model, the 6-core Ryzen 5 Pro 4650U in the review unit, and the even better 8-core Ryzen 7 Pro 4750U, which can be found in the higher-end configurations.

Based on my experiences with the Ryzen 5 4500U-based HP Envy x360 13 and this PC, I’d say that the middle of AMD’s processor lineup is the sweet spot. (And the “Pro” in the chipsets’ names indicates that they are designed for business-class PCs like ThinkPad, by the way.) Here, it’s paired with 8 GB of RAM and 256 GB of fast PCIe NVMe-based SSD storage, which is probably perfect for most needs. (I’d personally opt for 16 GB of RAM, but I’m overcompensating.)

Thanks to the six-core AMD Ryzen 5 Pro 4650U and Radeon integrated graphics, the X13 provides plenty of performance for traditional productivity work, including the light photo editing I do as part of my day job. Noise and heat are minimal, but both are in evidence during certain tasks, like application and system updates and even video playback. Both are tied to the heat vent on the right side of the machine, which can get quite hot if you’re pushing the system.

The ThinkPad X13 includes both Wi-Fi 6 (802.11ax) and Bluetooth, but there’s no cellular connectivity option.

On the X13’s left side, you’ll find two USB-C ports, an Ethernet expansion port (which is used with one of those USB-C ports for ThinkPad-branded docks), a full-sized USB 3.2 port, an HDMI video-out port, and a combo headphone/mic jack. 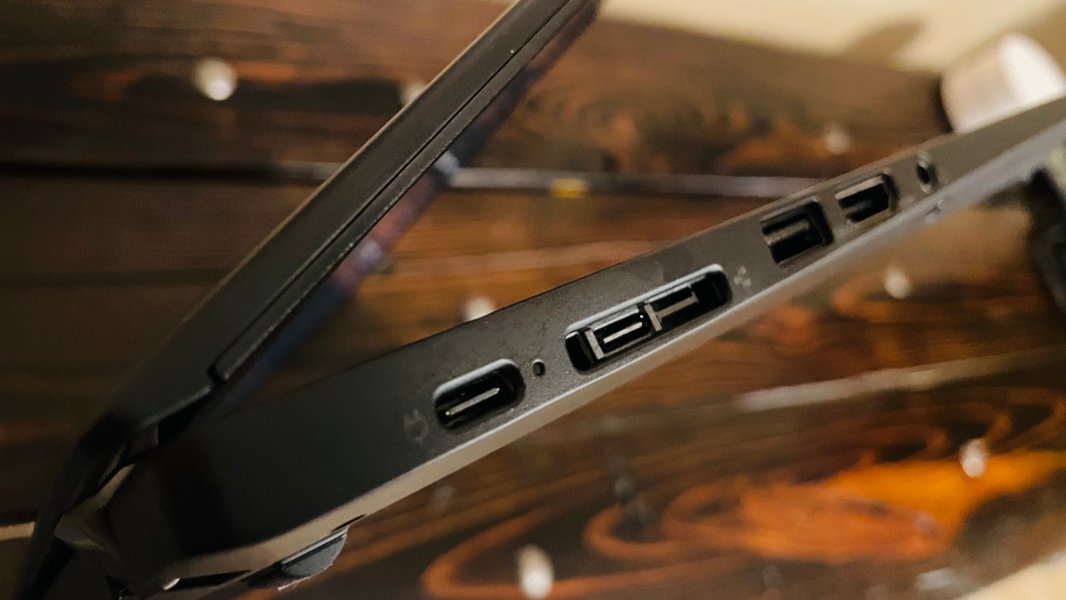 On the right, you’ll find a Kensington lock slot and a second full-sized USB 3.2 port next to the large heat vent and, towards the front, and smart-card reader for commercial customers. 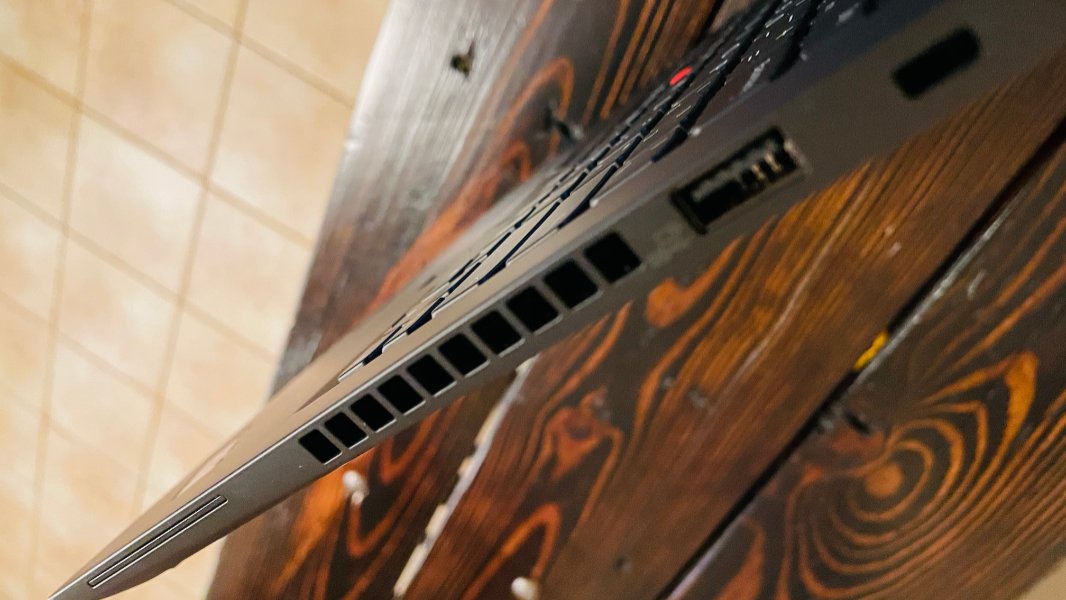 It’s well hidden, but Lenovo also includes a microSD card slot on the top end of the X13’s keyboard deck. You can only access it if the display is fully open (laying flat). 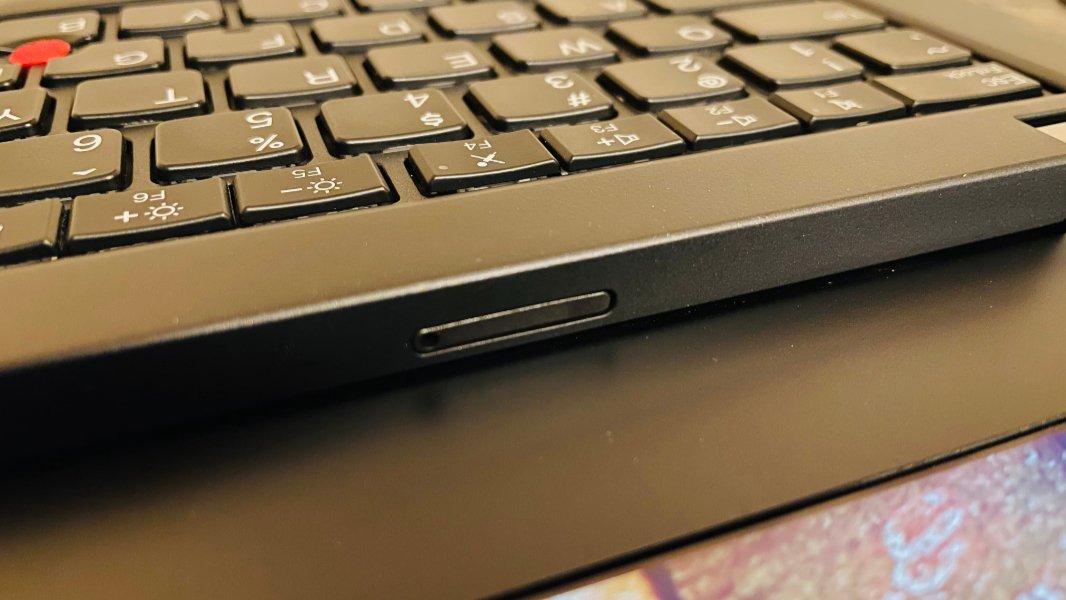 And yes, the X13 is powered via USB-C. Lenovo bundles one of its standard 65-watt chargers with the machine. 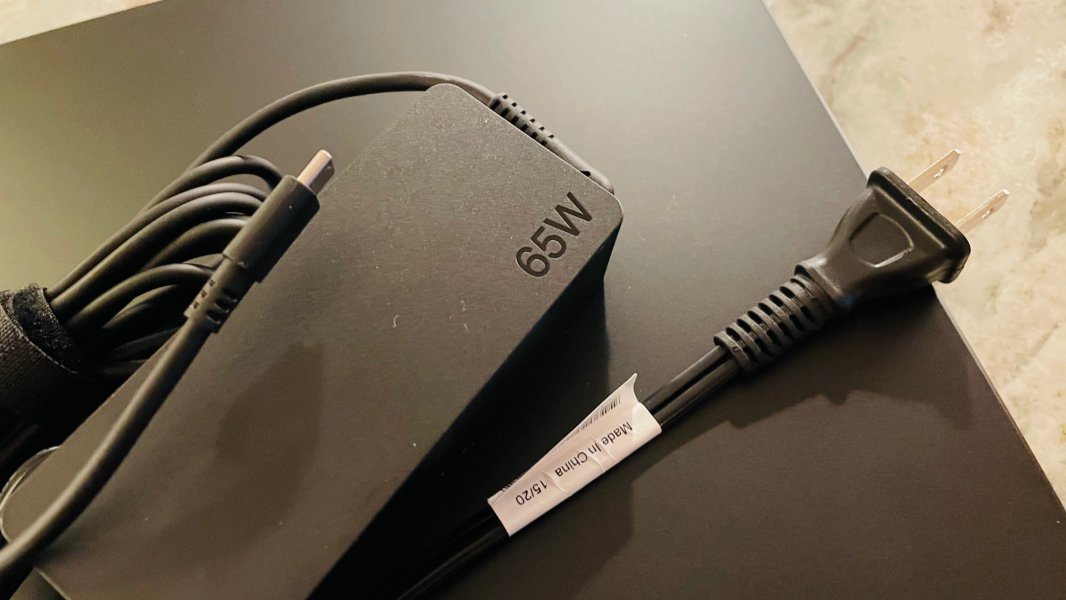 ThinkPads are world-renowned for the quality of their typing experience, and the X13 delivers exactly what one should expect, with scalloped, backlit, and mostly full-sized keys. But there are some weirdnesses here. 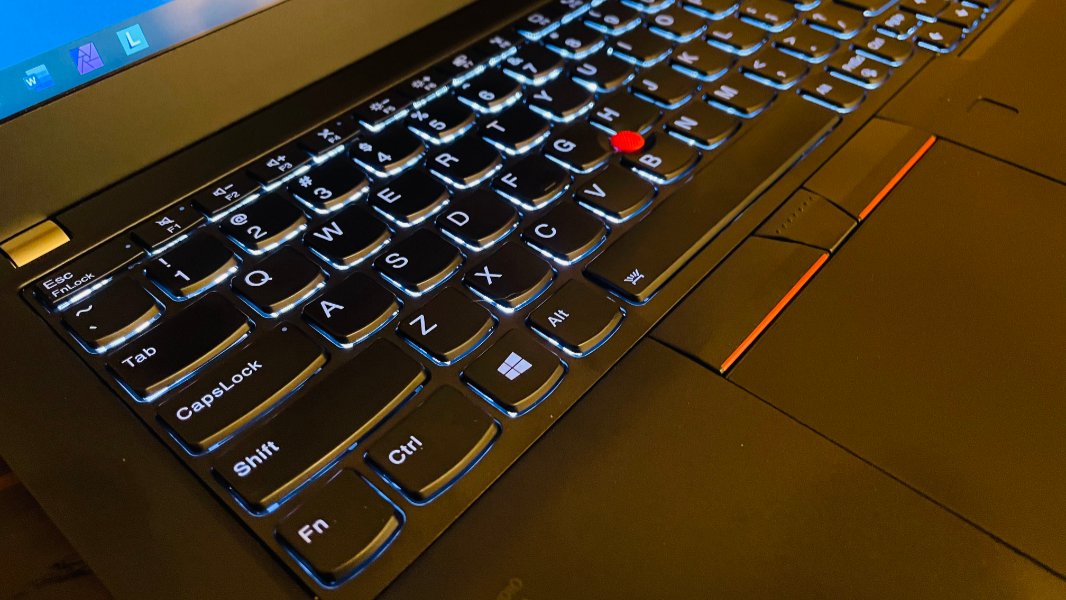 Lenovo inexplicably continues to reverse the position of its Fn and Ctrl keys, a problem that can only be fixed by visiting the BIOS. 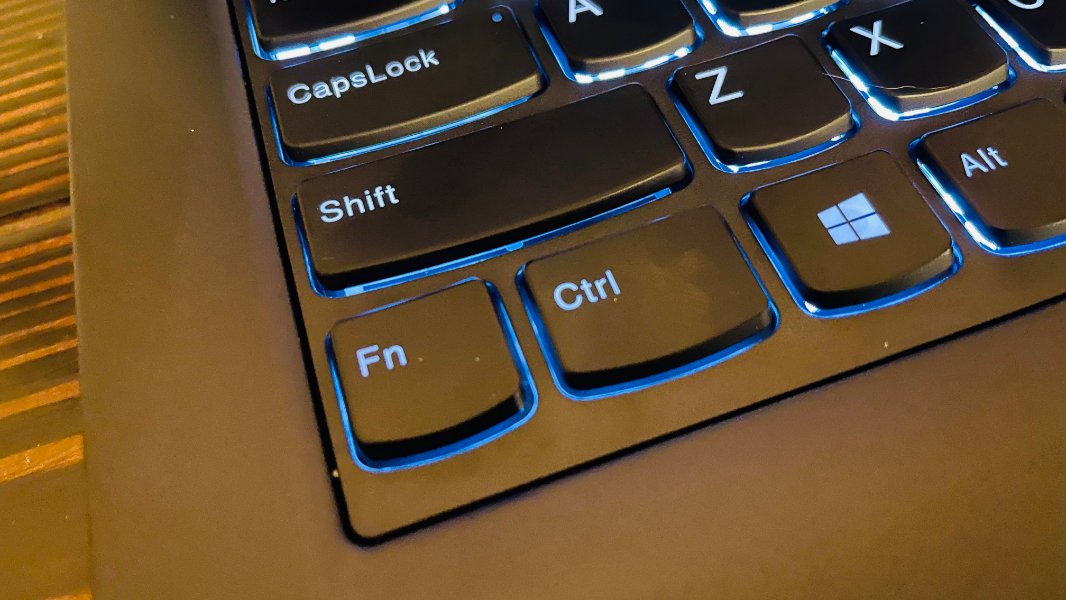 And some of the keys in the bottom right—like the arrow keys, PgUp, PgDn, right Alt and Ctrl, and PrtScn are curiously small. Given all the extra room in the deck—there’s about 3/4 of an inch of dead space on either side of the keyboard—I’m surprised by these concessions. 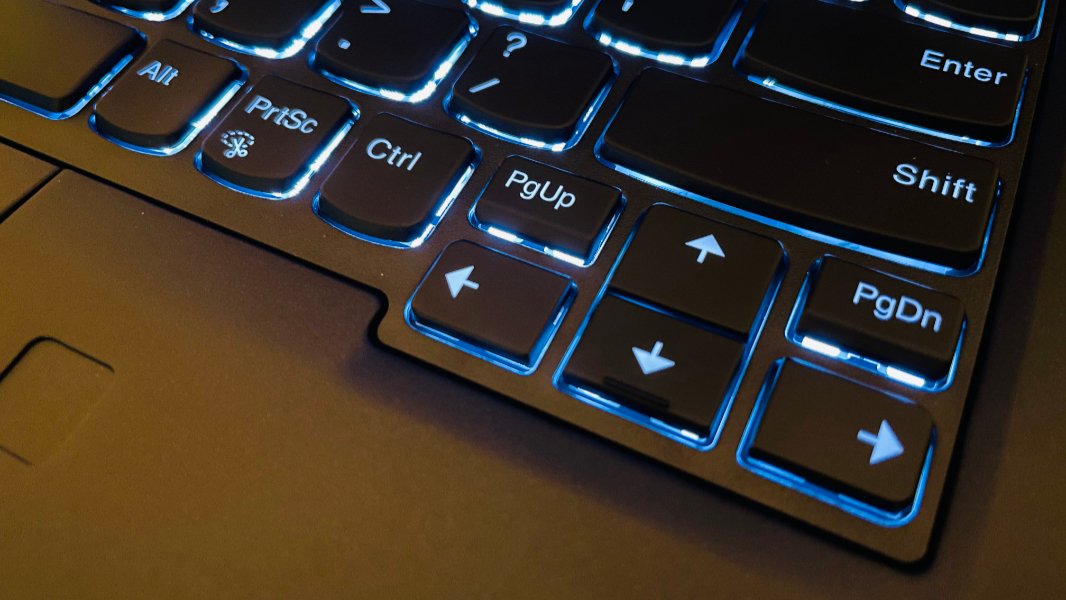 The dual-pointing system, however, is top-notch, with both a glorious TrackPoint nubbin between the G, H, and B keys and an excellent and perfectly-sized glass touchpad. 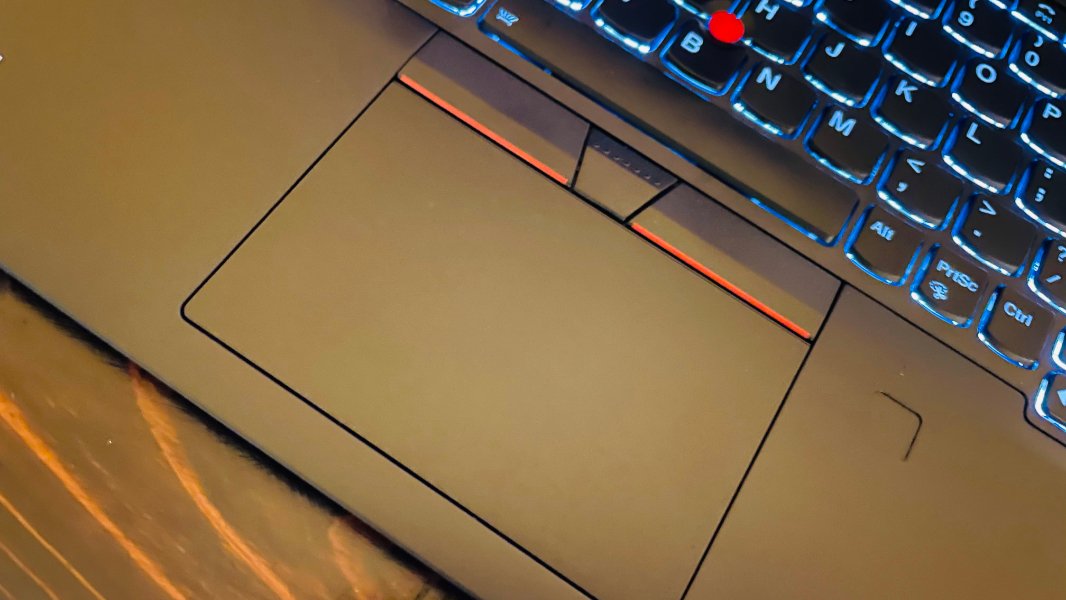 The ThinkPad X13 has dual, down-firing stereo speakers powered by Dolby Audio, and I like that it can be configured to dynamically tune itself for different types of content instead of relying on just manual controls. Sound is surprisingly loud and clear, and as is so often the case, I found myself getting lost in the music-filled fight scenes in Atomic Blond during testing. Just make sure the machine is sitting on a hard surface like a bed or other soft surface could muffle the sound (and add some heat issues). 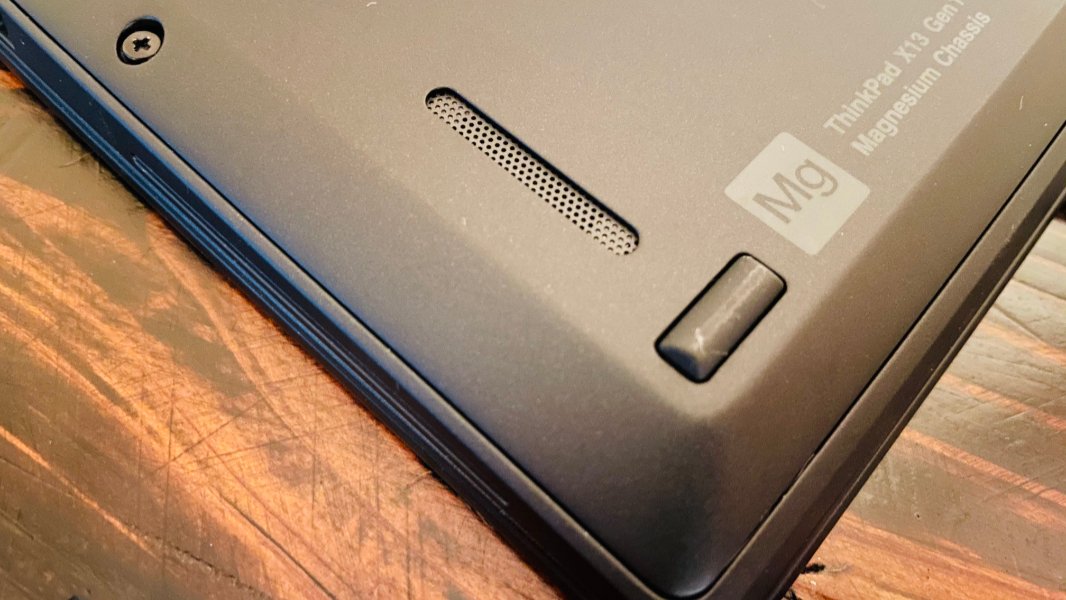 Lenovo always provides fast and reliable and Windows Hello-compatible fingerprint readers on its ThinkPads, and the X13 is no different, though I’d prefer a location other than the wrist rest.

There’s no facial recognition, however, and the webcam is only 720p and is pretty lousy, another concession to price. At least there’s a (manual) privacy shutter, called ThinkShutter, of course.

At 2.8 pounds, the ThinkPad X13 is reasonably light—I’m looking for under 3 pounds in the Ultraportable category—and its 12.3 x 8.6 x 0.69-inch form factor would slip easily into any bag. I assume. I didn’t travel with it, unfortunately. 2020 and all.

Battery life has been decent: I’m seeing between 7 and 8 hours of real-world battery life. Whatever real-world is these days, of course.

At a time when other PC makers have been slipping more and more crapware onto their PCs—yes, even their premium PCs—Lenovo has wisely held the line, and the X13 ships with exactly zero superfluous extra applications. Over whatever Microsoft ships in Windows 10 Pro, that is.

By the way, the Intel configurations cost hundreds more, and the base Intel version uses a dual-core Core-i3 chip. Ugh. (At least it supports Thunderbolt 3.)

The ThinkPad X13 is a tremendous value, assuming you skip over the entry-level model and its old-fashioned display. As reviewed, this $1000 ThinkPad provides most of what I love about Lenovo’s more expensive X1-series laptops, but at a much lower price. From the business-class ThinkPad design to the solid AMD performance to the classic ThinkPad typing experience and dual-pointer system, the X13 really delivers. And while there are some downsides—like the big bezels and some keyboard weirdisms—the list price really helps me get by them.

The ThinkPad X13 is highly recommended. It’s the right PC for 2020, a year when virtually everything else has gone wrong.