For those seeking a slim and lightweight laptop, the Lenovo Yoga series has been one of the best recommendations sitting with a price tag of less than Rs 1 lakh. The Slim series, in particular, has impressed consumers with its stylish yet portable design, paired with reliable performance. For this year, Lenovo has updated the Yoga Slim 7 series with the 10th Gen Intel Core processors with slightly revised prices.

The Apple MacBook Air has long set a benchmark for a slim and light laptop design in the industry for years. Windows laptops have taken time to catch up and the Lenovo Yoga Slim 7i is a testament to this fact. This is an incredibly thin laptop carrying the classic clamshell design. The 14-inch footprint ensures this slips into backpacks and tight spaces in my cupboard without any fuss. 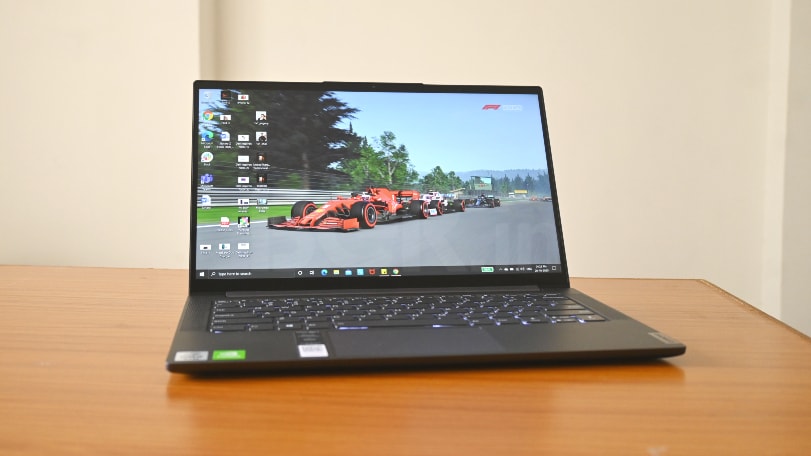 The chassis is made of Aluminum almost entirely, save for the bottom plate that is made of plastic. The lid carries the Yoga and Lenovo logos tastefully, adding a touch of class to the design. The edges are flat and slim but they hold all the necessary ports you seek from a laptop. You get a USB 3.2 Type-C port, another Type-C port, two USB 3.2 Type-A ports, a stereo audio/microphone combo jack, and a micro SD card slot. For wireless connectivity, there’s Wi-Fi 5 along with Bluetooth 5.0 on board.

Open the lid and you are greeted by a well-appointed handsome interior. There’s a Numpad-excluding QWERTY keyboard with large keycaps and white backlighting. This is accompanied by a fairly large trackpad, given the compact dimensions of the laptop. There are two speakers to either side of the keyboard while the power button sits on the side with the ports. 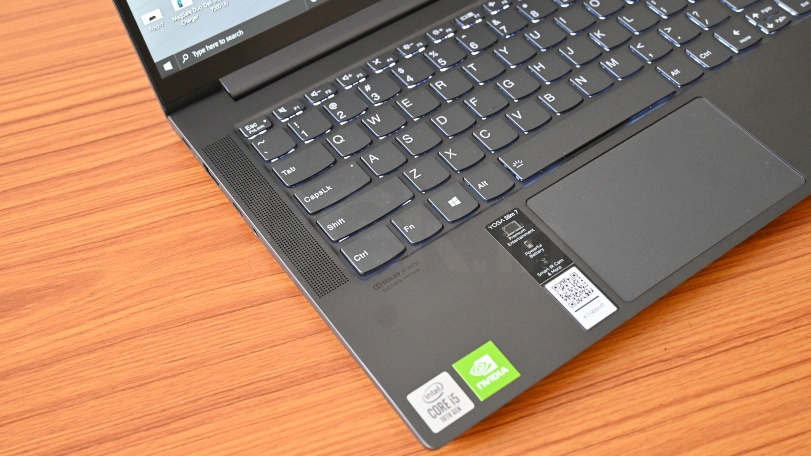 The display is covered in glass instead of matte plastic – it looks good for sure but is susceptible to scratches and smudges over time. The lid itself sticks to the deck firmly with magnetic attachments baked-in. There’s an HD webcam on the top accompanied by a host of IR sensors. These sensors provide a facial recognition-based verification system (a kind of Face ID). The hinge allows you to flex the lid in an angle of 180-degrees.

Despite packing all that tech in a metal body, the Yoga Slim 7i weighs 1.4Kg. This is light by all standards. I was able to carry it around my house with just one hand.

The Yoga Slim 7i features a 14-inch 1080p IPS LCD display. Lenovo does not mention the color gamut of the panel but it seems like it has 75 percent of the RGB color gamut. The display renders images in bright and vibrant colors. Whether I was working on my documents, editing photos, or watching YouTube videos, this display did not pose any issue with the colors.

Brightness is limited to 300 nits and indoors, that’s more than enough for anything. However, the glossy surface makes for disturbing reflections while working outdoors. The narrow bezels all around the display make for an immersive experience.

As I mentioned earlier, the Lenovo Yoga Slim 7i features the latest 10th Gen Intel Core i5-1035G1 processor clocked at 1GHz. This is a low-power variant of the Core i5 and is aimed at light tasks such as typing documents, managing a few applications and Chrome tabs, and causal photo editing. On my unit, this is paired with 8GB RAM, 512GB PCIe SSD storage, and an NVIDIA GeForce MX350 GPU. There’s a free copy of Windows 10 Home bundled with the laptop. 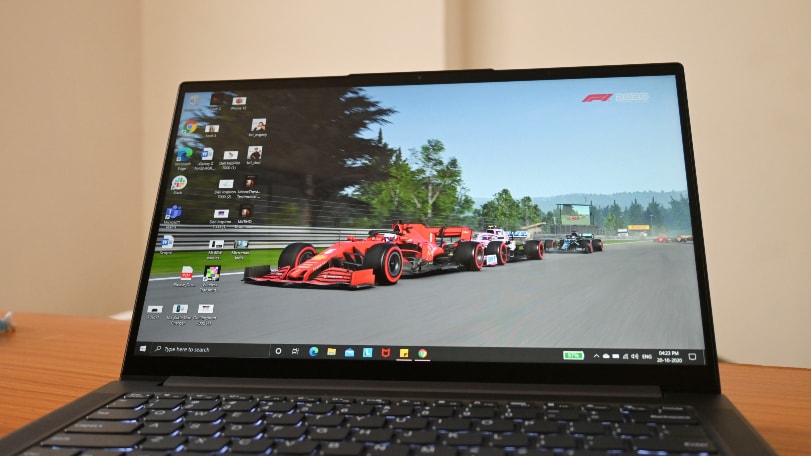 These specifications do not represent a powerhouse of a laptop but the Yoga Slim 7i isn’t trying to be one. This is a laptop you are supposed to use for your office work and then, carry on with basic entertainment needs. I wrote my daily news stories along with the reviews, including this one, on the Yoga 7i. All while writing on Google Docs, I always had at least 7-8 tabs opened simultaneously catering to my work needs. The Yoga Sim 7i did not bat an eyelid and kept performing as intended. I noticed no lags or stutters while shuffling applications or tabs. The 512GB storage isn’t enough in my opinion in the long run. You will need an external HDD for storing bigger files and movies.

Thanks to the MX350 GPU, I was able to do casual photo editing tasks on the Slim 7i easily. Content creators could also edit videos on this one, although it would take a lot of time to process 4K clips. You can even play a few basic games such as Fortnite and PUBG Lite on this laptop but beware of the temperatures. Given the slim dimensions of this laptop, it heats up quite easily and the metal body transmits a lot of that to your palms. HWInfo kept showing an average temperature of 90-degrees Celsius in demanding situations. 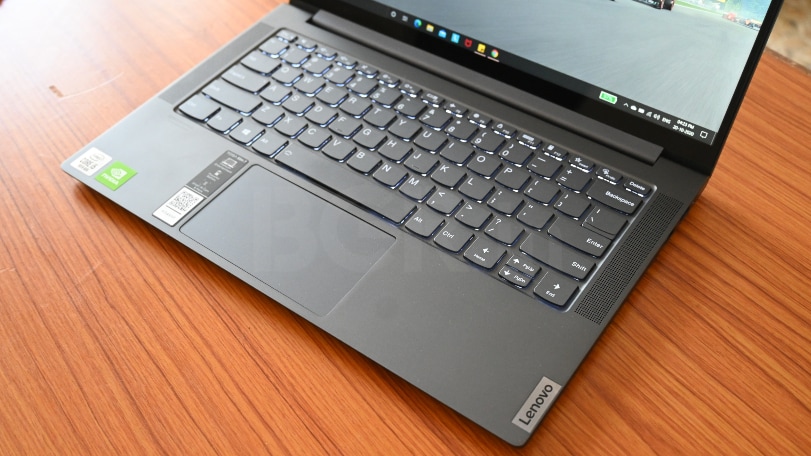 One of the key elements in all-rounder ultrabooks is the keyboard. The one on the Yoga Slim 7i is a good one with large keycaps. The key travel isn’t a lot but the feedback from them is satisfying. The spaced-out layout helped prevent mistyping to a large extent. I would have preferred larger arrow keys, though. The trackpad is highly responsive and works fairly well with all the Windows 10 trackpad gestures.

Those large speaker vents on either side of the keyboard aren’t just for show. Lenovo has stuffed nice and loud sounding speakers on this compact laptop. These have an output rated at just 2W but the performance on these is impressive. The speakers have decent levels of bass and clear highs. This setup will still lose out to a Bluetooth speaker in terms of overall quality but it works. In my small bedroom, it gets plenty loud for a small group of people catching on a movie. 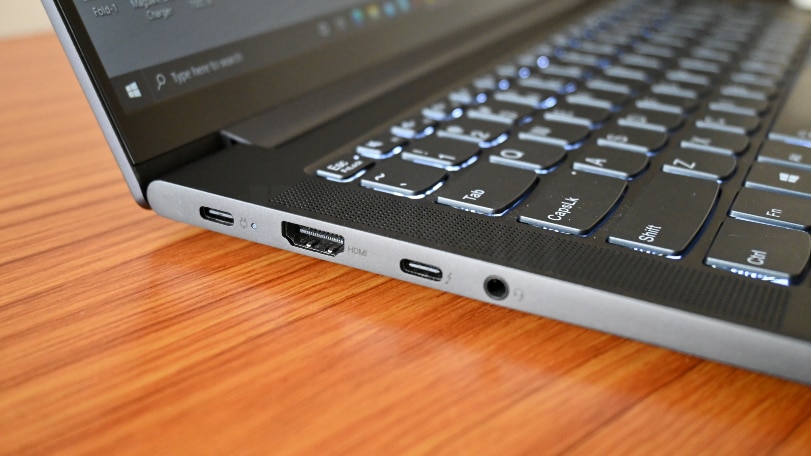 Another feature that caught my attention was the IR sensor-based Windows Hello recognition. As soon as you sit in front of the laptop, the ambient sensors light up the display and trigger the camera for facial recognition. The whole process takes at most a second, thereby removing the need for manually putting in the password or PIN. The webcam quality is bad even in well-lit rooms, though.

Lenovo uses a 60.7Wh battery in the Yoga Slim 7i and while it rates it for 14 hours, I was able to max out the laptop on a daily basis at 8 hours. Do note that I kept the laptop connected to the Wi-Fi network all the time, with Google Chrome, Slack, and Microsoft Teams running simultaneously. On a day with heavier workloads, the Yoga Slim 7i could last on an average of six hours. This is still decent for all the work-from-home needs but once the world opens up, you need to carry the power adapter around. 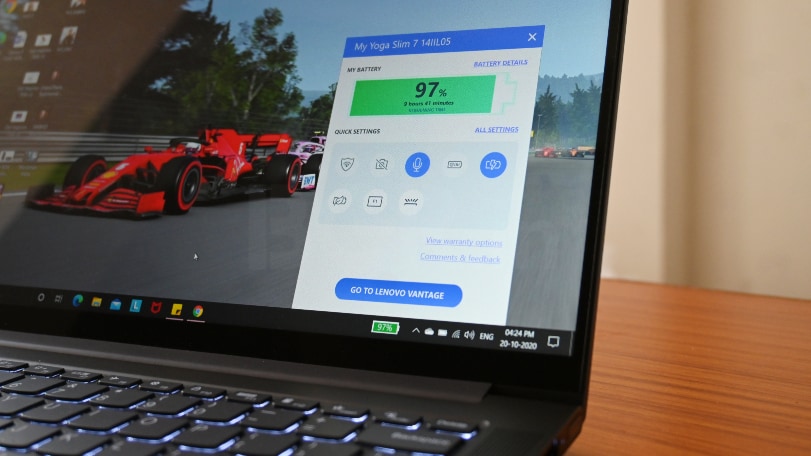 Thankfully, it does not take much time to fully recharge the battery from 20 percent or lower. With the supplied 65W charging adapter, the Yoga Slim 7i takes close to 40 minutes to fill up 50 percent of the battery while using it. Reaching the 100 percent mark takes close to 1.5 hours in total. With the USB-C charging port, you can keep it running on the mains as well. I used the 65W Warp Charge adapter from OnePlus at times for charging as well as running the laptop.

Lenovo Yoga Slim 7i: Should you buy it?

At a time when laptops have become one of the dearest household possessions, the Lenovo Yoga Slim 7i comes across as a great work-table companion. Surely, it is slightly expensive for a Windows laptop meant for home needs and light office work. That said, compared to the entry-level 10th Gen Core-i5 laptops, the Yoga Slim 7i runs longer without the charger and is comfortable for typing long documents at a stretch. Even when you are in the mood to play, the Yoga Slim 7i with its vivid display and loudspeakers is just right for binge-watching movies and shows. Not to forget, it looks great and is built to last years without throwing up tantrums. The Core i5 variant with the NVIDIA MX350 GPU was more than enough for moderate photo editing tasks. However, if you want to edit 4K videos, you should take a look at gaming laptops for similar prices, equipped with NVIDIA GTX 1050 graphics or higher. Additionally, you will need to invest in external storage, given the limited 512GB onboard SSD.

On the whole, however, the Lenovo Yoga Slim 7i is just right for most users as an all-rounder laptop.