LG has announced the full 2022 lineup of gram laptops for international markets, a few weeks after their launch in South Korea. The 2022 LG gram lineup includes a total of seven devices, including four clamshell laptops, two convertibles, and the new gram +view portable monitor.

The new LG gram laptops are all powered by Intel’s 12th-generation Core processors ranging from a Core i3 to a Core i7. While the global announcement doesn’t mention what series these processors are from, we can assume they’re from the P-series just like in Korea. That means they have a higher 28W TDP compared to last year’s models, thus promising even better performance. Additionally, they come with new LPDDR5 RAM and fast PCI)e Gen 4 storage, so you should get fantastic performance across the board.

For the first time, LG is also giving you the option to add a discrete GPU in some of the models. Specifically, the LG gram 17 and gram 16 can be configured with an optional NVIDIA GeForce RTX 2050, giving a boost to the graphics performance, which might be helpful for some creative workloads or for gaming. Models with a discrete GPU also have a larger 90Wh battery, as opposed to the 80Whr battery of the standard models.

One big upgrade all the laptops have this year is the webcam, which is now a Full HD sensor complete with IR support for Windows Hello. That’s standard across the lineup, and it’s a very welcome change.

Of course, the laptops still live up to their namesake, with the gram 14 being the lightest at 999 grams. The other models are all heavier, saw you might expect. That’s especially true of the gram 17 and gram 16 with the discrete GPU added. Still, these are very lightweight machines, and even the heaviest gram 17 still weighs just 3.16lbs.

On the software side, the new laptops come with a couple of new apps, including Glance by Mirametrix – a feature that allows the display to be blurred or turned off when the user looks away from it, or for the laptop to lock entirely when the user moves away. Additionally, the laptops include PCmover Professional, a tool designed to help users move their data from their old PC to their new one with ease. 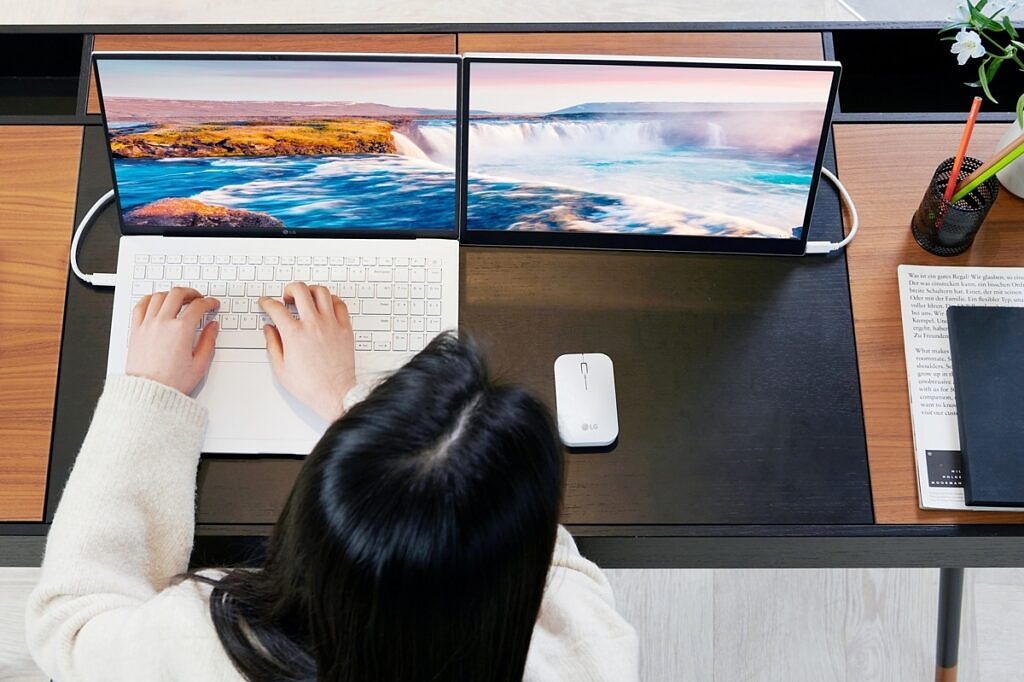 Aside from the laptops, we also have the new gram +view, which is a 16-inch portable monitor designed to mimic the display on the LG gram 16. That means it’s an IPS panel and it also has a 16:10 aspect ratio to help with multi-tasking. LG didn’t share detailed specs, but the monitor connects via USB Type-C, so it should be fairly easy to set up.

These products are set to start rolling out in the second quarter of the year (which we’re already in), starting with key markets in North America, Europe, and Asia. Pricing has yet to be announced.