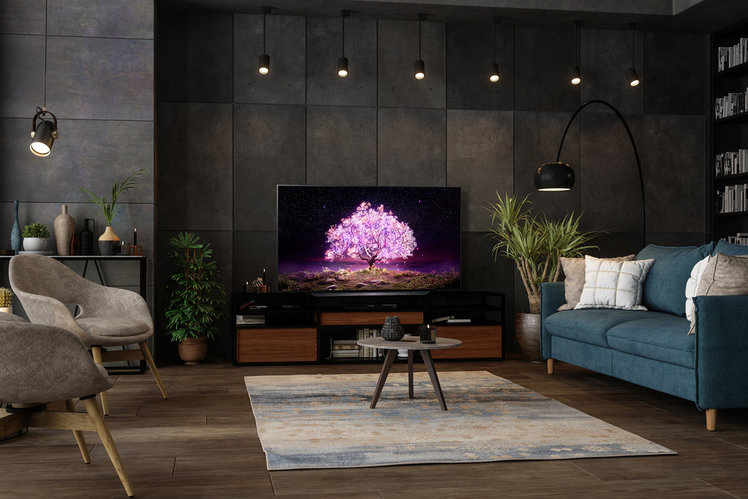 LG’s C Series of mid-range 4K OLED TVs has proved so popular that the Korean giant added the new brighter ‘Evo’ panel to the higher-end G1 in an attempt to differentiate the two ranges. The success of this tactic remains to be seen but, based on the new C1, LG could still find the majority of consumers going for this cheaper option.

The LG C1 is not only competitively priced, it’s also a superb performer thanks to the Alpha 9 Gen 4 processor with added artificial intelligence (AI) wizardry. Its webOS smart platform has been given a make-over to be more comprehensive than before, while the inclusion of Dolby Vision and Atmos, HDMI 2.1, and extensive gaming features rounds out an impressive package.

The LG C1 sports the same minimalist design as previous generations: there’s an almost bezel-less screen; an ultra-thin chassis that widens out at the bottom to accommodate the electronics, speakers and connections; and a stylish dark grey finish.

A solid base provides support at the rear, while the sloped stand at the front is also finished in dark grey and covers about three quarters of the panel width. This doesn’t just provide balance, it also effectively redirects the sound from the downward-firing speakers toward the viewer.

LG gets top marks for connectivity, with four HDMI 2.1 inputs that support eARC, 4K resolution at 120Hz, VRR, and ALLM – making the C1 a perfect companion for PlayStation 5 and Xbox Series X next-gen consoles. Other connections include tuners, a trio of USB ports, a digital optical audio output, Ethernet, plus Wi-Fi, Bluetooth 5.0 and AirPlay 2 wireless connectivity.

The Magic Remote has been given a cheeky makeover – but continues to cast its spell with a slimmed-down black controller design that’s very comfortable to hold. The pointer remains an intuitive method of navigating the webOS platform, and there are now direct buttons for all the main video streamers.

The LG C1 uses the latest 4K 10-bit OLED panel, and while it’s not as bright as the G1’s ‘Evo’ panel, the difference is surprisingly minimal. No OLED screen is every going to hit the peak brightness of a high-end LCD, but the deep blacks and pixel-level precision always impress. 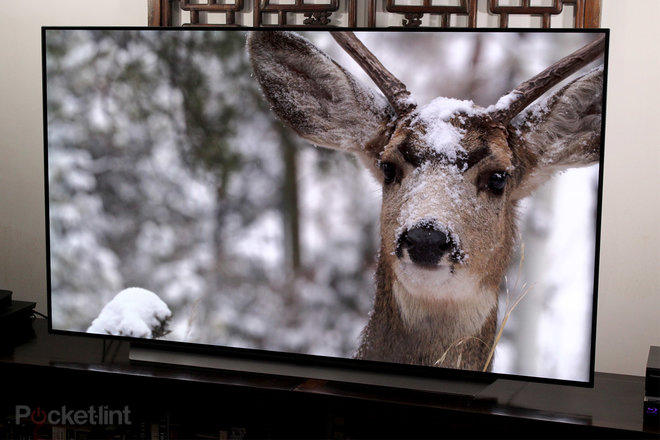 The self-emissive nature of OLED ensures a superior contrast performance, with inky blacks and exceptional shadow detail. Zack Snyder’s Justice League, for example, allows the C1 to render the movie’s dark and moody photography with remarkable precision and clarity.

The fourth-generation Alpha 9 processor continues to conjure up amazing images thanks to deep learning algorithms that analyse the content, establishing the genre and quality. It then optimises the images using sublime upscaling, sophisticated noise reduction, and other enhancement tools.

Screen uniformity is excellent, with no signs of banding, dirty screen effect, or colour tinting on the panel. It also handles reflections well, minimising light diffusion, while the very wide viewing angles ensure perfect pictures no matter where you’re sat in the room. 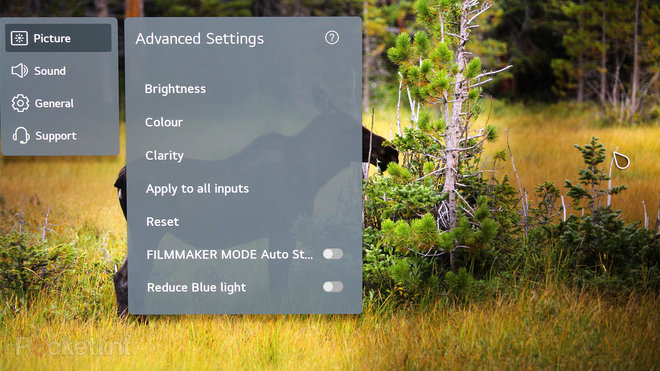 The TV ships in the default ‘Standard’ mode, which will probably suit most people with its bright and colourful images. However, those seeking a more accurate picture should select the Filmmaker Mode, which retains the content creator’s original artistic intent.

This mode also turns off the TruMotion settings, thus ensuring movies don’t look like a soap opera. While you’ll want to avoid motion smoothing with movies, the overall motion handling is good, and the various settings can prove very useful when it comes to fast-paced sports action.

The Blu-ray of Samsara features stunning photography that the C1 renders with natural colours, beautifully defined detail, and fantastic contrast ratios. In fact this high-quality disc is upscaled so well that you’ll almost swear it’s 4K rather than Full HD.

The new Alpha 9 Gen 4 chipset does an exceptional job with lower-resolution content, too, applying its AI-enhanced upscaling and image processing to a variety of sources. As a result Mare of Easttown still manages to look good, even on the Now app at a basic 720p (you can get it in Full HD, if you pay for the higher priced subscription booster package).

The C1 is equally as impressive when it comes to high dynamic range (HDR), and once again the Filmmaker Mode is your best bet for an accurate picture with HDR10 and HLG source material.

When it comes to Dolby Vision the Cinema mode is the most accurate, but might be too dark for daytime viewing. The Dolby Vision IQ mode (Cinema Home) addresses this by using a built-in sensor to adjust the picture brightness based on the ambient light and dynamic metadata.

OLED’s self-emissive nature results in a combination of deep blacks and pixel-precise highlights that produce staggering dynamic range. In addition, the near-black gradation is wonderfully refined, drawing every last detail out of the shadows in a dark film like Overlord.

The colour performance is fantastic, and reaches 99 per cent of the DCI-P3 colour space. This means you’re getting the full benefit of HDR’s wider colour gamut, and the results are often breathtaking. Inside Out‘s deliberately exaggerated colours are a chromatic feast for the eyes on 4K Blu-ray. 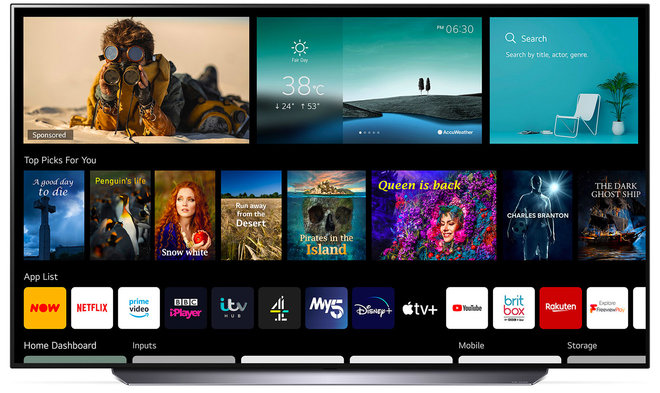 The dynamic tone mapping remains a valuable feature, allowing the C1 to get the most out of its OLED panel. Blade Runner 2049‘s bustling city streets are rendered with exacting detail in the shadows, while the bright neon punctuates the gloom with remarkable precision.

The LG C1 didn’t put a foot wrong during our testing, and our only real issues are the usual ones relating to OLED’s inherent limitations. The peak brightness can’t match an LCD TV, and an OLED struggles to light up the entire screen – so the snowy landscapes of The Revenant look good in terms of icy reflections, but lack a certain amount of overall impact. 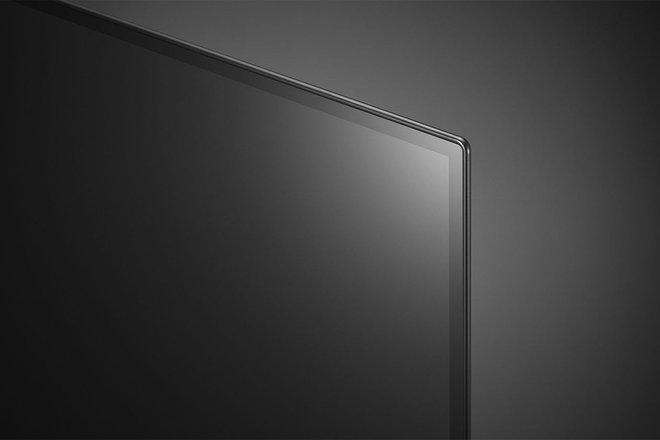 There’s also no support for HDR10+ here – the competing format to Dolby Vision that also uses dynamic metadata – but this is no great loss because HDR10+ has largely failed to gain any traction outside of Amazon Prime and a few 4K Blu-rays. Dolby Vision has become the dominant HDR format, especially on disc and with streamers like Netflix, Disney and Apple.

The LG C1 is a fantastic TV for gamers, thanks to support for 4K resolution at 120Hz with Variable Refresh Rate support – including Nvidia G-Sync and AMD Freesync. Gameplay is smooth and tear-free, while ALLM automatically switches the TV into the low-latency Game Optimiser mode when a console is detected. 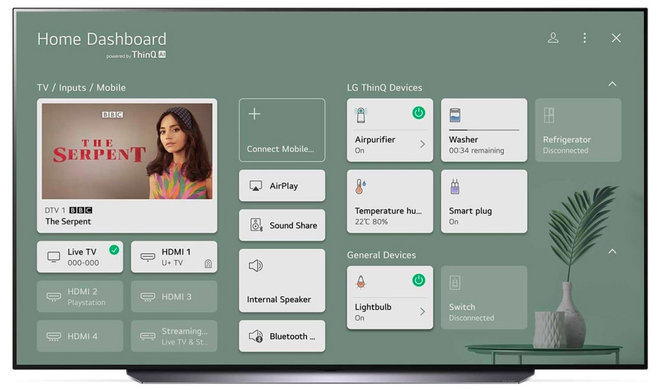 The response times in the game mode are exceptional, with an input lag of 12ms on a 60Hz signal, and an insanely fast 6ms on a 120Hz signal. New for this 2021 model is the Prevent Input Delay setting, which boosts the response for 60Hz games and reduces the input lag to below 10ms.

As a result gaming is fantastic fun, with fluid motion and detailed images. Whatever your preferred style of gaming the C1 is sure to please, and the risk of screen burn is minimal if you’re sensible, watch a variety of content, and don’t leave games paused for hours.

The LG C1 runs webOS 6.0. This iteration of the popular user interface drops the familiar launcher bar along the bottom of the screen, replacing it with a full-screen homepage with greater emphasis on curated content and programme recommendations. 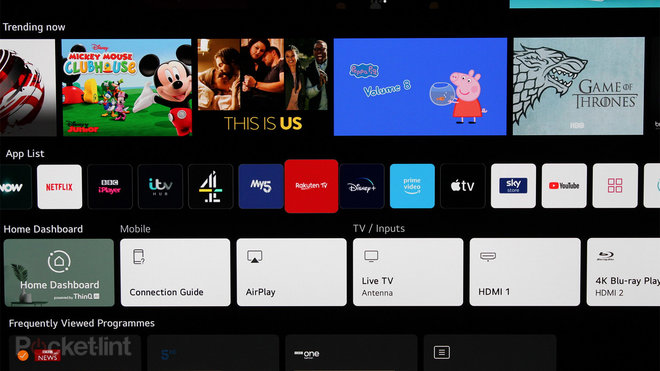 The choice of streaming apps is impressively comprehensive, and includes YouTube, Netflix, Amazon Prime, Disney+, Apple TV+, Now and Rakuten TV. Fans of the UK catch-up TV services will be glad to know that Freeview Play makes a welcome return this year.

The LG C1 manages to cram a 2.2-channel sound system and 40W of power inside its svelte chassis, and thanks to the sloped stand redirecting the audio from the downward-firing speakers, there’s a decent front soundstage with plenty of width and a degree of stereo separation. 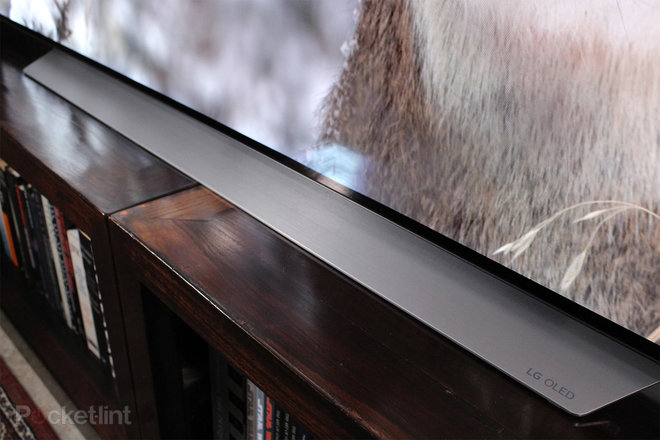 The sound can be tuned depending on whether the C1 is stand- or wall-mounted, and LG includes AI Acoustic Tuning to optimise the sound for specific environments. The are numerous sound modes, along with AI Sound Pro for upmixing the audio using psychoacoustic processing.

The C1 also supports Dolby Atmos decoding, giving the audio a greater sense of space and dimensionality. There’s sufficient volume and even a degree of bass delivery, but clearly if you want the best from your new OLED TV you should invest in a good-quality soundbar.