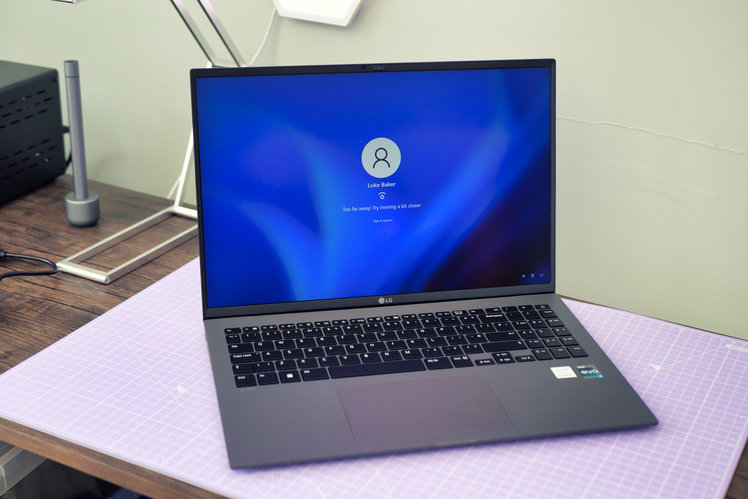 It’s a luxury to be able to take your work with you, setting up easily in a coffee shop or an airport to tick some things off your list. However, carrying around a big hefty laptop, and the backache and pit-stains that come along with doing so, are much less of a luxury. Being confined to a tiny display, isn’t all that conducive to productivity, either.

So, what’s that answer? Well, one possible solution is LG’s 16-inch Gram notebook. It’s lightweight, powerful and has plenty of screen real-estate for getting things done. On paper, it sounds like a remote worker’s dream device.

We’ve been putting it to the test to find out what it’s really like to live with, and how it stacks up to the competition.

The 2022 LG Gram 16 looks a lot like its predecessor, and that’s sensible, professional and just a bit boring. It basically looks and feels like most affordable Windows laptops, and priced as it is, it’s a little disappointing initially. However, when you pick it up, the difference is immediately apparent.

The Gram 16 weighs less than 1.2kg, and that’s a pretty remarkable feat, given its sizable 16-inch frame. It’s quite shocking how easily you can pick up such a large laptop with one hand. The flip side of that is the fact that the chassis feels a bit hollow and the screen can easily flex without applying much force at all. It’s a far cry from the dense solid feel of a MacBook Pro, but then, that weighs almost twice as much. 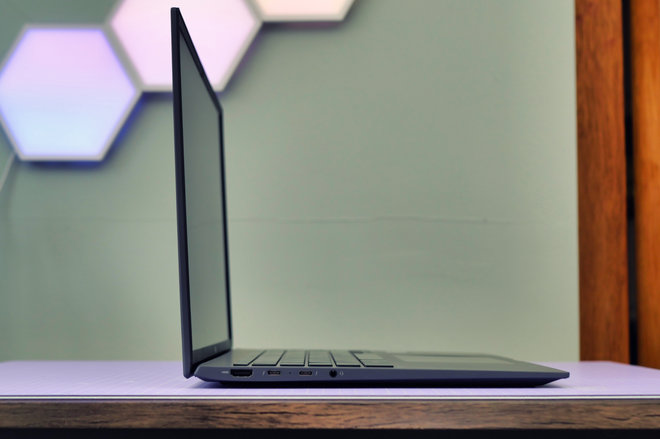 The overall look and feel don’t inspire confidence in durability, but on the contrary, the Gram has passed a seven-grade military durability test. It therefore shouldn’t have any trouble with a standard daily commute.

The chassis is made from magnesium-alloy and plastic, so it’s not as cool to the touch as its aluminium-based counterparts. There’s a grippy, soft-touch coating applied throughout, and this makes it very easy to handle without fear of it slipping, as well as feeling quite nice on the palm rest. Unfortunately, this coating is extremely prone to fingerprint smudges, and we found it near-impossible to keep the lid smear-free.

The keyboard is well-sized and we were typing at full speed within a matter of minutes. There’s a fair amount of key travel, given the slim chassis, and a full number pad, which is sure to delight those who spend their day tapping away at spreadsheets. We were pleasantly surprised at the lack of flex in the keyboard, too. The trackpad is similarly impressive, it’s massive, responsive and glides well. 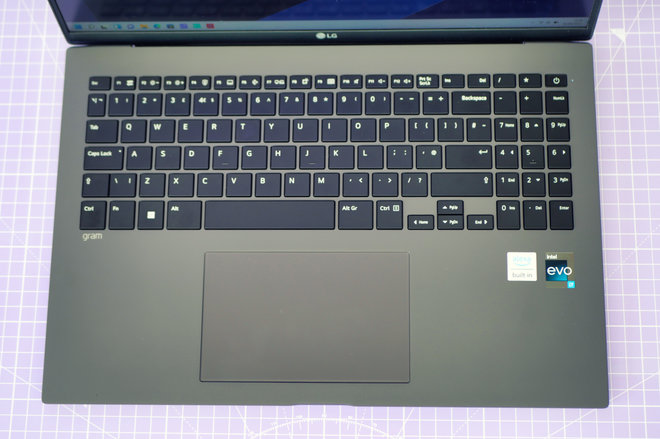 The array of ports on offer is another highlight, one side houses dual Thunderbolt 4 ports, HDMI 2.0 and a 3.5mm headphone socket. The other features dual USB Type-A ports and a microSD card reader. We’ve gotten used to ultrabooks with extremely limiting port selections, and this abundance of connectivity was refreshing to use.

Our test unit has a 16-inch IPS panel with a WQXGA resolution. It has a matte anti-glare finish, which is a huge improvement over the 2021 model’s glossy display, that often caused distracting distorted reflections.

It’s not a touchscreen display, and there’s no glass coating on the panel, presumably in the name of saving weight. This means it lacks rigidity, as we mentioned earlier, and it has a plastic trim around the screen which we didn’t find very attractive. The bezels are nice and thin, though, so you get a great screen-to-body ratio and the matte finish makes it much more suitable for use outdoors. 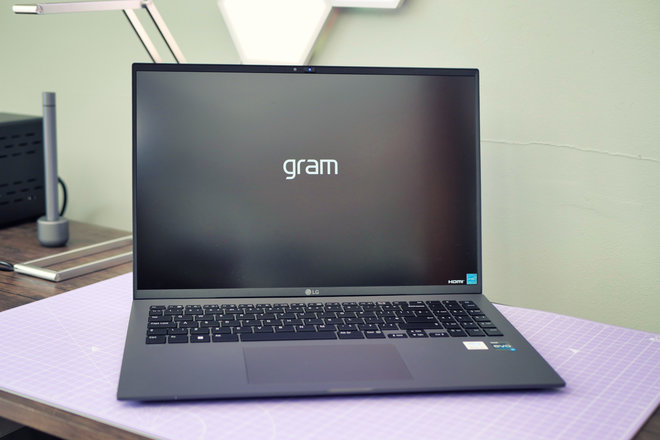 When it comes to the display’s performance, we don’t have much to complain about at all. The colour depth is superb, making it a viable option for graphic designers and video editors. It offers loads of detail, good contrast levels and juicy vibrant colours. The display is decently bright, too, and we didn’t struggle using it outdoors. The matte finish helps massively here, where glass-fronted displays tend to struggle out in the sunlight.

The speakers, on the other hand, aren’t the most impressive. They can achieve a decent volume, but there’s almost no low-end to speak of, and their downward firing orientation doesn’t help matters, either. Especially if you’re using it on your lap, or on a soft surface, it’s very easy to muffle the sound. 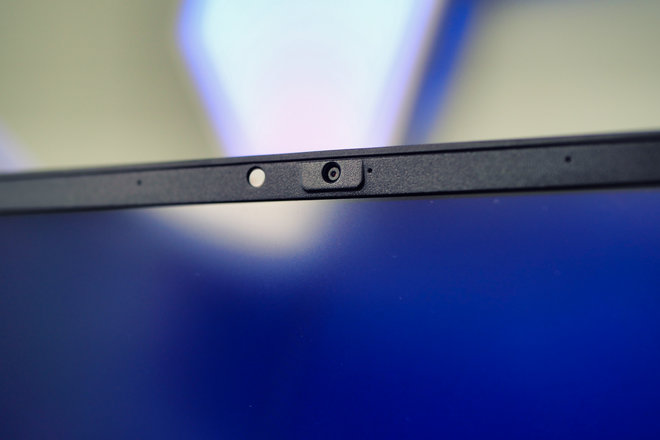 There’s a 1080p webcam that’s found in the top bezel. Its image quality is better than the 720p equivalent found on most laptops, but it’s unremarkable and struggles with back-lit scenarios. It does, however, have Windows Hello support, so you can log in with your face, as well as another pretty cool party trick using the LG Glance by Mirametrix app.

With the app open, the webcam can detect where you are looking, and you can use this to perform a wide range of functions. The most useful, for us, was switching windows between monitors using only your head. It also allows you to blur one screen while you are looking at the other, for the sake of privacy, and even be warned when someone is peeking over your shoulder. 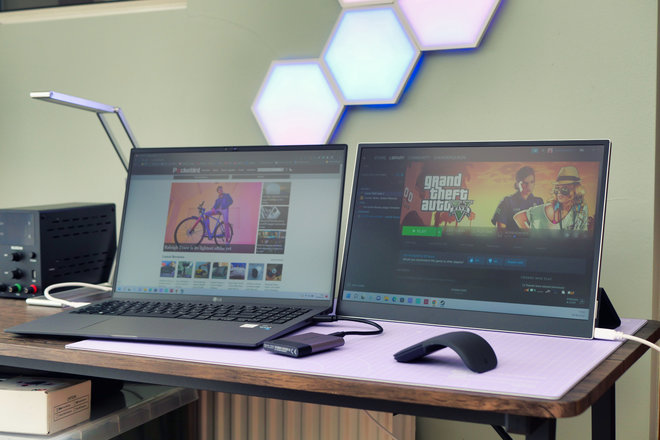 We were impressed by how well the glance features work, and how useful they can be. Another particular highlight for us was that it would pause a YouTube video if we walked away from the laptop, and can lock the screen in the same way. Handy stuff.

We put some hours in using the LG +View USB-C portable monitor as a secondary display. This can be purchased in a bundle with the laptop, or on its own as an optional upgrade. It’s a nice easy way to get some additional screen space, with a single cable connection and specs that are on par with the laptop’s built-in display. It’s fantastic for productivity, lightweight and definitely worth considering.

The LG Gram 16 is a snappy and responsive performer that had no trouble powering through our daily tasks. With endless chrome tabs open and very large files open in photoshop, it showed no signs of slowing and barely even ramped up the fans. In the majority of scenarios, it kept pace with the XPS 13 Plus and its massive 32GB of RAM, all while remaining cooler and quieter. 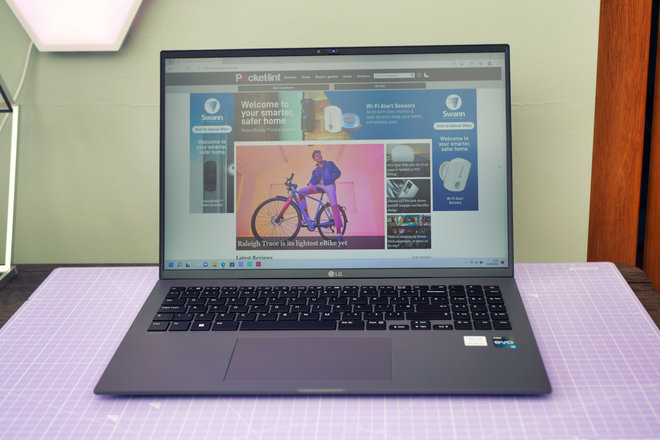 Of course, if you push it to the limit the laptop will heat up and those fans will ramp up more, but it never got uncomfortable to the touch, nor intrusively loud. We even managed some light gaming on the integrated Intel XE graphics. It’s not designed for this, so you’ll have to turn the settings down, but it handled CSGO providing good framerates at 1080p resolution. GTA V proved more of a challenge, and you’d need to drop the graphics down to sub 720p to get playable framerates.

The battery life is advertised as up to 20.5 hours, but in reality, you can expect about half of that, which is still impressive. Depending on what we were doing, it wasn’t uncommon to get through a work day on a single charge, which is all you can really ask for. Especially in something this lightweight. 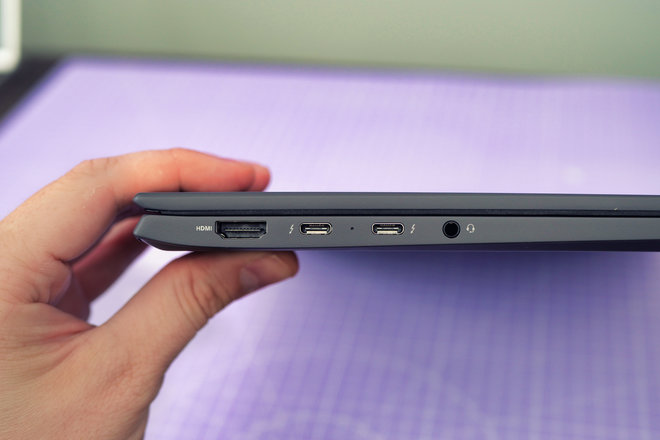 We were pleased to see USB-C charging, which is becoming a staple of modern ultrabooks. It means that one charger can power your phone, laptop, earbuds and other gadgets – making packing much less of a chore. The Gram 16 comes with a reasonably sized 65W charging brick in the box, but we tested with third-party 65W phone chargers, too, and it worked just as well.