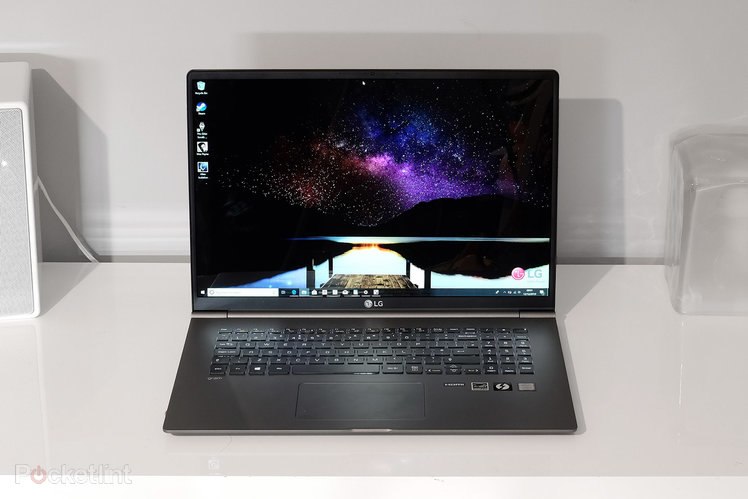 LG is probably not the first name that comes to mind when you think about laptops. But its Gram series is quite remarkable.

These are some of the lightest laptops in the world, have ultra-long battery life, and no obvious compromises in performance. And the LG Gram 17 takes this to a whole new level.

It’s a 17-inch laptop, nowadays pretty odd in itself. But it is perhaps the only 17-inch laptop we’d want to carry around, between cafes, office and airports, every day. It is mind bendingly light for this scale, and thanks to reasonably slim screen borders, should fit just fine in bags designed for 15.6-inch laptops.

LG has chosen a totally different route to innovation than Apple, Dell or Asus. And we kinda like it.

In case that all sounded too much like a preamble to a load more back-slapping, let’s start with one of the LG Gram 17’s most important bad bits: LG uses a magnesium alloy with bits of ‘nano carbon’ packed in, in order to keep this laptop light. Magnesium is strong, carbon is stiff. Go team. 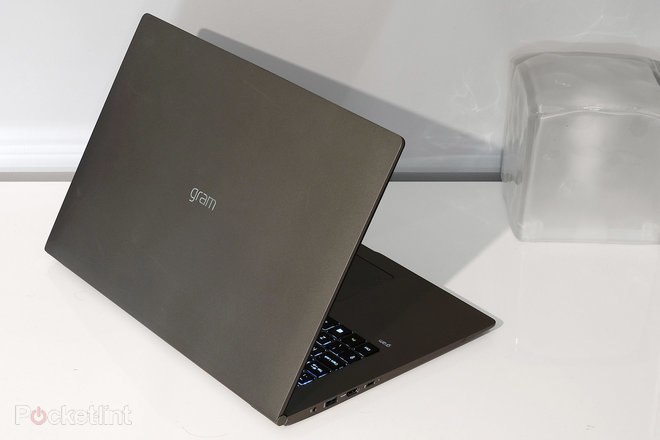 It’s a good combo, but we bet 90 per cent of you won’t exactly be bowled over by how it feels. If you put the finger sensation of plastic, paper and aluminium into a tactile cauldron and gave them a stir, you might end up with the LG Gram 17’s case.

Lots of people mistake magnesium for plastic at first touch, and this alloy is no different. The Gram 17’s lid and main panels flex more than the relatively thick aluminium of a MacBook Pro 16 too. If there’s a price for the low weight, it’s this.

However, there’s very little reason to even consider the LG Gram 17 if the ‘low weight, big screen’ thing is not a huge draw. And while the keyboard plate does flex a bit if you press it down very hard, it’s simply not an issue for normal use. This may not initially seem like a very well-made laptop, but it is one.

LG also waves bye-bye to the headache of adapters. This laptop doesn’t dump all traditional connectors as if we are all founders of Silicon Valley start-ups with PAs at our fingertips and AI assistants in our ears. It has three USB 3.0s, a Thunderbolt 3 USB-C, HDMI, microSD and a Kensington lock socket for the corporate crowd.

The LG Gram 17 is made for practicality from the ground up, and for frequent travellers like us, that’s a massive plus. 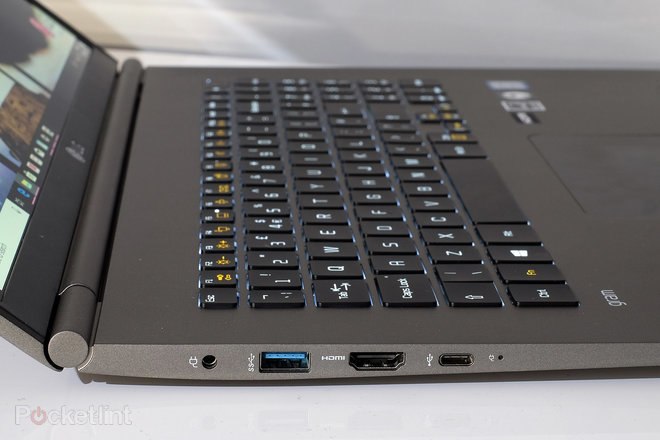 It is not a beauty as such, though. Its screen is not full-flat, with a lip around the edge, and its style is arguably basic rather than tastefully minimal.

LG’s keyboard font also has the faint air of a 90s hacker movie. But if that’s going to bother you for more than a day or so, suck up the extra grand (or more) and buy a MacBook Pro 16.

The LG Gram 17’s screen is really the main event, but there’s not much to say tech-wise here beyond what you already know. That being: it’s huge.

That’s a big benefit for everything from working on boring spreadsheets to playing games. We switched to the LG Gram 17 from the 13-inch MacBook Pro we usually work on, and it is a completely different feel. What we do most of the time – writing – doesn’t really justify a 17-inch experience; but for detailed image editing and music production it’s superb. 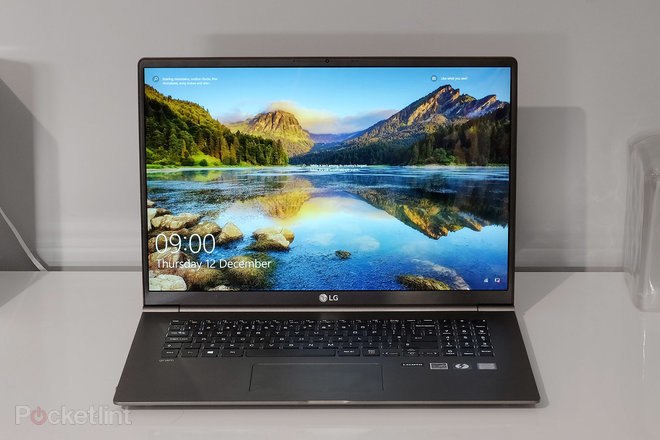 However, after reviewing a Currys PC World store’s worth of laptops over the last year or two, we’re still happy with every aspect of this LG screen. Colour, brightness, contrast and sharpness are all more than solid; in isolation you won’t notice it’s not quite MacBook levels.

The style of the screen once again shows the specificity of LG’s focus too. This is not a touchscreen, the hinge flips back around 140-degrees rather than full-flat 180-degrees. The LG Gram 17 isn’t a hybrid, it doesn’t have extra screens, and doesn’t make any ridiculous compromises for its ultra-low weight.

This is a glossy screen rather than the matte kind used in most 17-inch laptops, but this perhaps fits the XL lifestyle laptop angle better anyway. Glossy screens tend to look better than matte ones, but make reflections more obvious and distracting, which can be a pain when working outside or by a strong source of daylight.

The balance of style and seriousness extends to the keyboard and trackpad too. LG has taken a more traditional route than Apple, adding a NUM pad to the right of the standard keyboard layout. 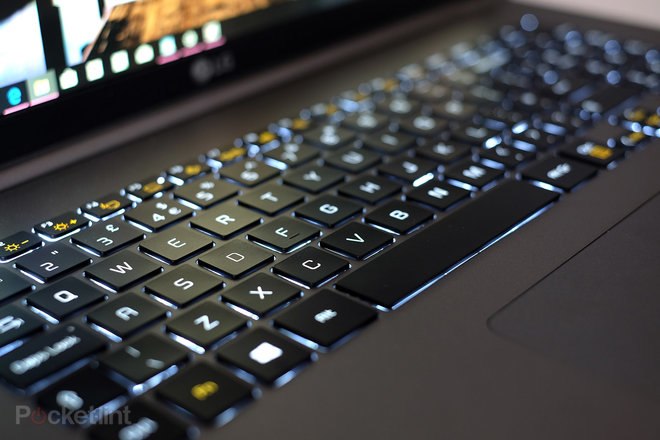 This shifts the standard keys slightly left of centre, which may cause a few typos in your first day or two. Get over that tiny hump and you’ll find the LG Gram 17’s keyboard satisfying. It has a deeper feel than the MacBook Pro 16, and while the keys let off some higher-pitch noises as you tap away, the actual key mechanism has a solid clonk to it.

You get all the usual secondary function keys, a more unusual “reader” mode that reduces the blue light output of the screen to make it easier on your eyes, while a 2-level backlight is handy for late-night working and flights.

There are few complaints to make about the trackpad too. It’s fairly large, has a lovely textured glass surface and doesn’t seem to have any major driver issues that might cause unexpected double clicks and other such bad behaviour. 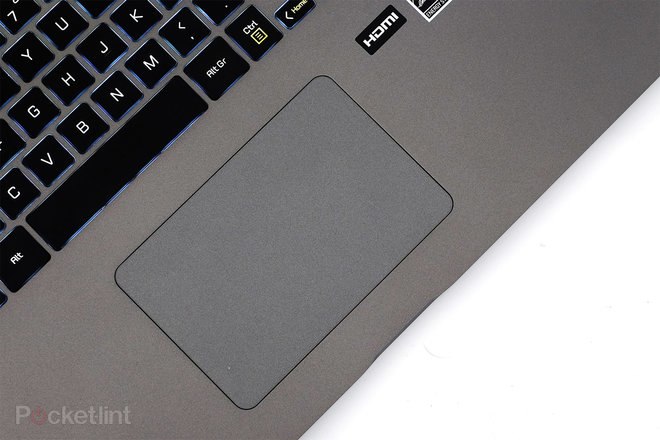 The LG Gram 17 feels like a serious 17-inch laptop when you work on it, which is an achievement in itself considering the low weight.

LG hasn’t sacrificed performance either, but the core specs do raise the question of timing. We first heard about the Gram 17 in December 2018. We’re reviewing it in December 2019, just days after LG quietly announced a version of it with a slightly larger battery and a 10th Generation CPU is coming.

Our Gram 17 has an 8th Gen U-series CPU, which are currently on their way out. It would be a much bigger problem if the Core i7-10510U it’s likely to be replaced by offered a massive increase to power. Early tests suggest that’s about 10 per cent faster, which means it’s unlikely to change too many lives. 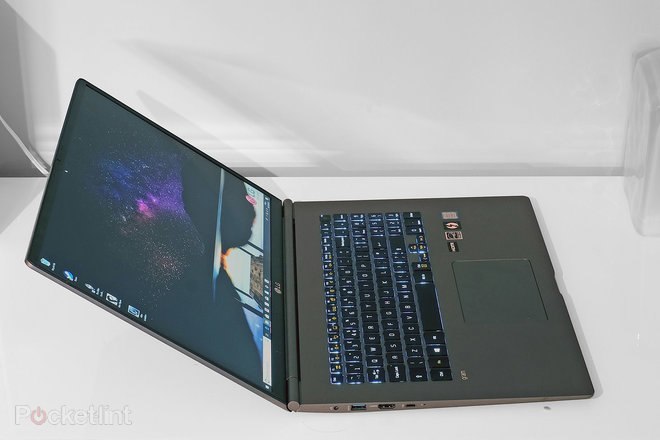 Our scoring for this laptop is based on going easy on LG for using an older CPU. And who knows how long you might have to wait for the 10th Gen version…

We don’t feel like we are missing out with the Gram 17’s Core i7-8565U processor. Windows 10 runs very well, and even though this is a lower-voltage CPU than those used by the MacBook Pro 16, there’s still enough power to edit video and run pro-level apps like Photoshop, Lightroom and Ableton. Our review model has 16GB RAM too, making it even better for such data-heavy apps.

You get this level of RAM and a 512GB SSD in the £1477 Gram 17. And this actually makes it seem fairly reasonably priced. It is similar to the 4K version of the Dell XPS 13.

Don’t get us wrong: the LG Gram 17 is not nearly as powerful as the MacBook Pro 16 or a 17-inch laptop like the Razer Blade Pro. It’s not a flat-out performance machine, but then it isn’t meant to be one.

The LG Gram 17’s huge screen also made us curious about gaming. We get no dedicated graphics card here, just the Intel UHD 620 GPU that is part of the main processor. So AAA console games at the native resolution are a bust. Alien: Isolation and Skyrim chug too much. But reduce the resolution to 1200p and drop the graphics settings to somewhere between ‘low’ and ‘medium’ and you can play both these titles well. 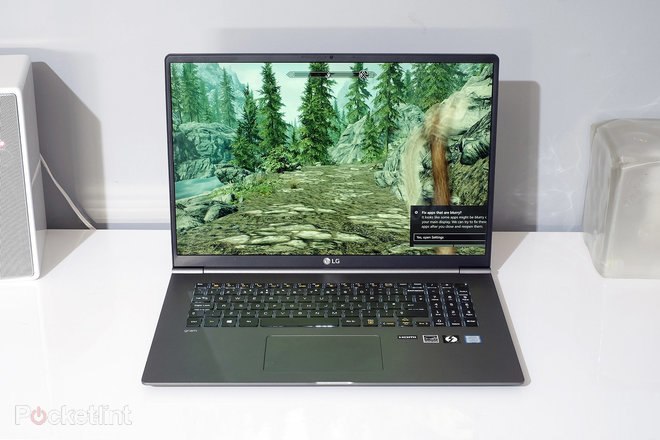 They look great on the Gram 17’s screen. It’s one of the benefits of being at the tail-end of a long console cycle: a non-gaming laptop like this can actually play some current-gen games well enough.

The LG Gram 17 even has passable speakers, a stereo pair with drivers to each side of the left/right underside curves. Mid-range substance is the highlight here, which gives people’s voices some weight. There’s no real bass and they aren’t even in the same universe as the MacBook Pro 16 speakers, but they do the job for the occasional TV episode or game.

LG makes big claims about the Gram 17’s battery life: 19.5 hours. However, this is based on pretty undemanding testing: 50 per cent performing basic office-like jobs via MobileMark 2014 and 50 per cent sitting around doing nothing.

The battery is of a reasonable size, though, at 72Wh. This is much smaller than the MacBook Pro 16’s 100Wh battery (the maximum allowable for transporting on planes), but as it has a lower voltage CPU, so this is not a like-for-like comparison. 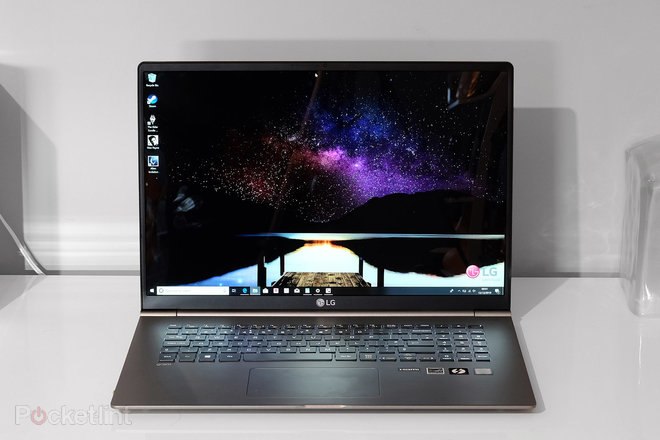 More testing was needed, so we used the LG Gram 17 as our work PC for a while and watched as the battery drained down. We got through an 7.5-hour day of writing and researching with some charge left in the tank.

One day after work we left it streaming video off YouTube at 50 per cent brightness. Some four hours and 40 minutes took half off the battery level, suggesting it’ll last around nine-and-a-bit hours in total. This is miles off LG’s own claims, and not as good as the LG Gram 15. But not being able to trust most manufacturers’ figures is nothing new.