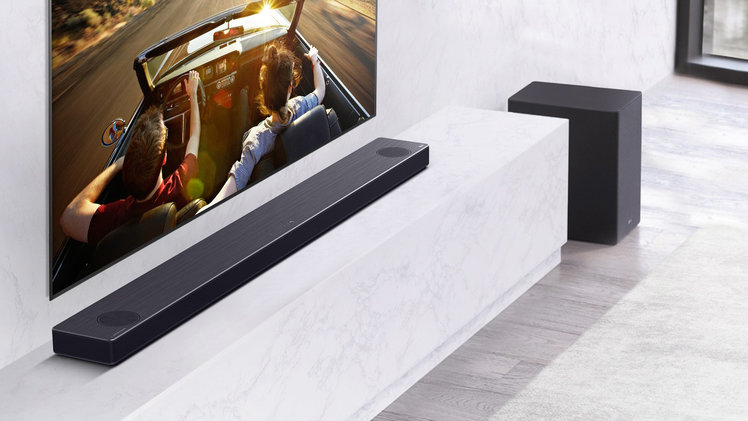 The SN11RG is LG’s flagship soundbar for 2020, upping the ante on the previous SL10YG by adding wireless rear speakers with built-in upward-firing drivers. As a result the new model can deliver a fully-immersive 7.1.4-channel system, putting it in a head-to-head battle with arch-rival Samsung’s HW-Q950T.

The LG SN11RG doesn’t deviate from last year’s aesthetic, with a sleek frame, curved edges, and low form-factor that shouldn’t block your screen.

This cabinet is fairly wide, making it better suited to TVs with panel sizes of at least 55-inches, but clearly it’s aimed at today’s bigger screen sizes. You can choose between placing the soundbar on a stand in front of your TV, or wall-mounting using the included template and dedicated brackets. 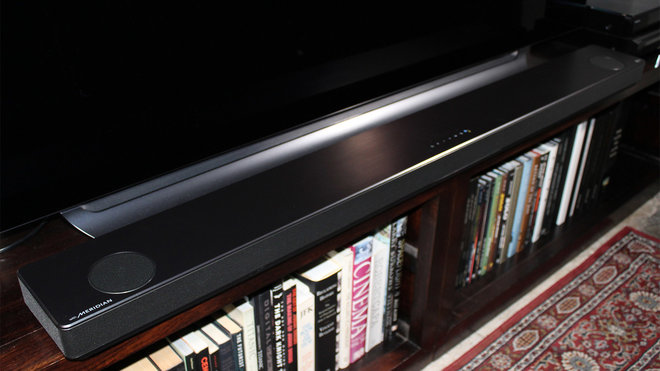 The overall appearance is minimalist, the build quality very good. There’s a moulded plastic chassis, with a black and dark grey colour scheme, and a brushed aluminium finish on top. There’s a full-length wrap-around perforated metal grille hiding the front- and side-firing speakers, and a pair of circular metal grilles on the top for the up-firers. There’s a five character display on the front right, with four LEDs beneath to indicate the status of Google Assistant.

The included wireless active subwoofer is composed of MDF, and has a finish that matches the main soundbar unit. It uses a 7-inch front-firing driver with a rear port, and should pair automatically when first turned on (although if not, there’s a button for manual pairing). While the sub connects wirelessly with the main unit, you will need to plug it into a power socket.

The wireless rear speakers are new for 2020, and include upward-firing drivers. Their cabinets are well-made and reasonably compact, with a finish that also matches the main soundbar unit. Each speaker comes with wall-mounting brackets (to use if necessary), and like the sub they need to be plugged into their own power sockets.

The LG SN11RG houses its connections in a recessed area on the underside, where you’ll find two HDMI inputs, an HDMI output with eARC, a USB port, and an optical digital audio input. There’s no Ethernet port, but in terms of wireless connections there’s a choice of built-in Wi-Fi and Bluetooth, plus there’s support for Chromecast – but no AirPlay. 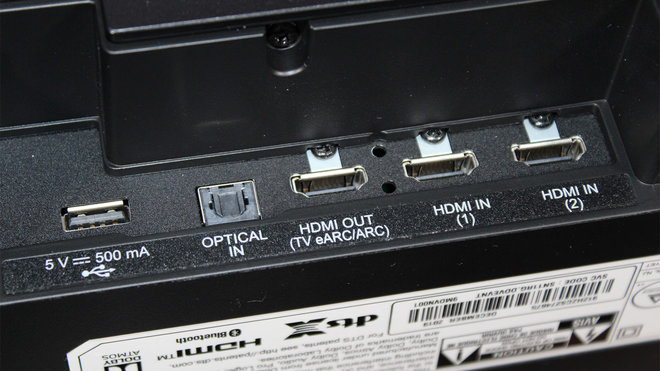 All the HDMI ports can pass 4K/60p and HDCP 2.3, plus there’s support for HDR10, HLG, and Dolby Vision. There’s not HDR10+ support – but this isn’t surprising given LG’s stance towards the format, although it is slightly annoying in a high-end soundbar. Two HDMI inputs is also a bit stingy, but the inclusion of eARC means you can send lossless audio back from a compatible TV.

There’s a wealth of control options, starting with touch-sensitive buttons on the soundbar itself. Located at the top and towards the centre of the main unit, these include power, function, volume up/down, play/pause, mute (the built-in far-field microphones), and Google Assistant.

The included remote is similar to its predecessor, with a few minor button changes. The layout remains sensible, but the diminutive dimensions make it annoyingly fiddly to use. There are large buttons for main operations like power, volume, function, and mute, along with smaller buttons underneath for less commonly used controls.

LG also offers a smartphone app (for both iOS and Android) which provides access to all the controls found on the remote and even a couple of extra ones: Dynamic Range Control, Auto Volume Leveller, and the new AI room correction feature. You’ll need to use the Google Home app to setup the Wi-Fi connection, and it also offers limited control. 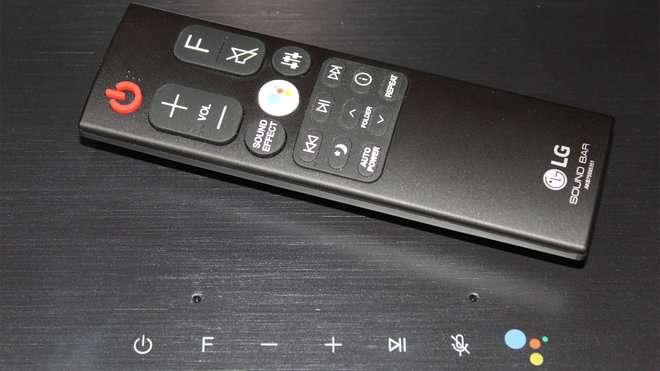 If all that wasn’t enough, those of you connecting via HDMI-CEC can use your TV’s zapper to change the volume, and thanks to built-in Google Assistant and a pair of far-field mics there’s also the option of limited voice control for those who prefer to take a hands-free stance.

Incredibly the LG SN11RG is even more feature-packed than its predecessors, with a list of specs that’s as long as your arm. It’s headlined by a fully-immersive 7.1.4-channel layout, composed of front-firing left and right speakers, a centre channel, side-firing width drivers, upward-firing front height channels, wireless rear speakers with up-firing drivers, and a wireless subwoofer. 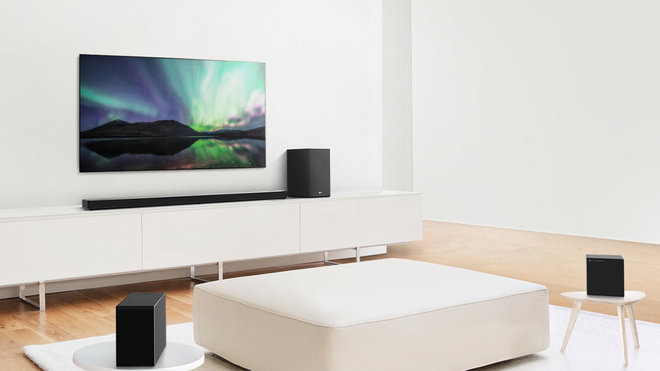 There’s plenty of power, with 50W of built-in amplification for each of the front, centre, side, rear and upward-firing speakers in the soundbar, plus 220W for the subwoofer – that’s a whopping 770W of grunt. That’s some serious muscle, ensuring this soundbar is capable of producing a room-filling soundstage.

Thanks to all these speakers, the SN11RG supports object-based audio in the form of Dolby Atmos and DTS:X, creating a genuinely immersive experience. It also supports all the other Dolby and DTS variants (with the exception of IMAX Enhanced DTS:X), along with LPCM. The soundbar is also able to use all its speakers to up-mix non-immersive content.

The SN11 sports a number of sound modes, including the newly updated AI Sound Pro, which on-the-fly analyses audio signals and optimises them accordingly. These’s also Standard, Music, Movie, and Bass Blast – which are all self-explanatory. Other settings include Night Mode, Dynamic Range Control, Auto Volume Leveller, and a User EQ.

The new AI room calibration feature uses the two mics built into the soundbar and various test tones to determine the layout of your room in only 15 seconds. It then configures itself accordingly, compensating for the room using algorithms designed to improve the overall sonic performance, and produce distortion-free audio. 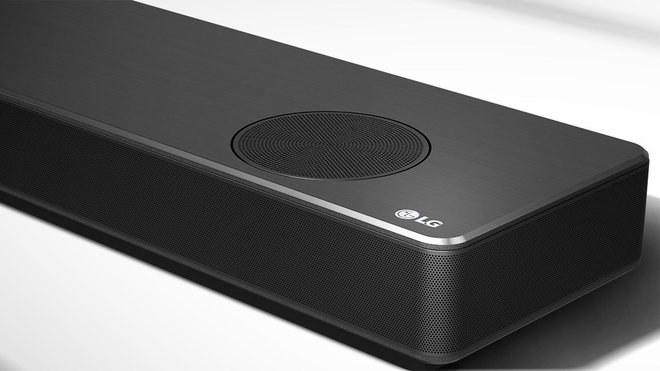 The built-in Google Assistant not only allows for voice control of the soundbar but also makes it easy to find information, play music and more by simply saying “Hey Google” or pressing the Google button on the main unit, controller or remote app. This engages the far-field microphones in the soundbar and, thanks to the built-in AI, you have a fully functioning smart speaker.

The LG SN11RG impresses right out of the gate, and the impact of the surround and rear height channels is immediate. The front-heavy delivery of the SL10YG is replaced by a bubble of sound that extends all around and above you. The difference is quite profound – it’s the sonic equivalent of comparing 2D and 3D versions of the same film.

The side-firers help give the front soundstage greater width, while the four up-firers bounce sounds off the ceiling to create the illusion of overhead channels. The effectiveness of the latter will depend on your ceiling – and the more reflective, the better. The dedicated centre speaker ensures dialogue remains clear and focused on the screen, while the rears add surround effects. Finally the subwoofer lays down a solid foundation of bass that underpins the entire soundstage. 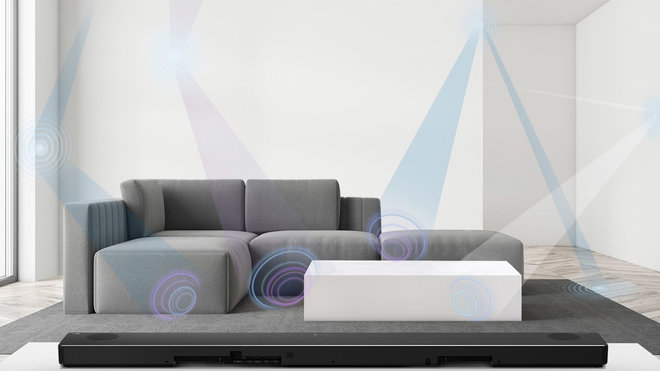 Bring all this together, power it with a shed-load of amplification and you’ve yourself a seriously good soundbar system. Whether you’re catching-up on your favourite TV show, watching a movie or listening to music, it’ll deliver the goods. There’s a warm and rich sound, combined with an energetic and boisterous delivery, resulting in a performance that’s hugely entertaining.

If you delve into the wonderful world of object-based audio, you’ll be delighted with the results. The more extensively a film uses immersive sound, the more impressive the effects. A great example is 1917, which employs a highly directional Dolby Atmos mix to enhance the production’s one-take conceit. Sounds are seamlessly steered around the room to match the protagonist’s point of view; planes fly directly overhead; and a bunker explosion envelopes you in debris.

Switching to a DTS:X track, and the T-Rex attack in Jurassic Park remains a masterclass in sound design. The sub digs deep to herald the hungry dino’s arrival, while thunder rolls overhead and rain lashes all around. When the T-Rex roars it’s deafening, and the escape down a tree is all the more thrilling as branches crack overhead.

The jazzy Whiplash reveals the SN11’s ability to sound just as good with a regular 5.1 mix. There’s a pleasing musicality to the syncopated delivery, and the bass is expertly integrated with the rest of the system, providing a perfectly timed percussive kick that should keep even the film’s abusive teacher happy. This also means the LG is equally adept at handling two-channel audio, whether you’re watching a TV show or listening to your favourite music. 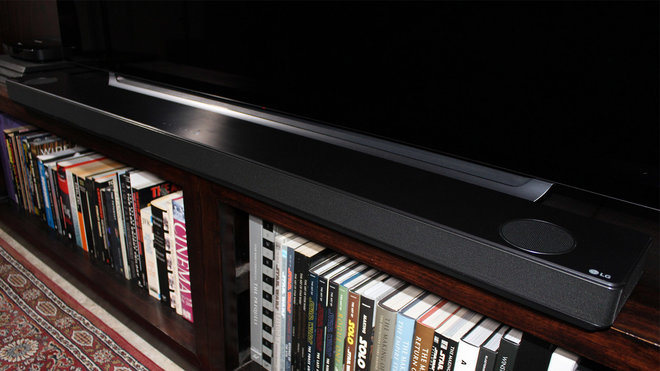 The ability to use HDMI-ARC to send Atmos back from a TV’s built-in apps opens up a whole new world of Atmos delights, and the Netflix show The Haunting of Hill House is a great example. Horror is all about the sound – and this spooky show makes full use of those extra channels to place terrifying bumps and bangs in precise three-dimensional space. It’s a nerve-shredding sound mix, and perfectly demonstrates the sonically immersive nature of object-based audio.