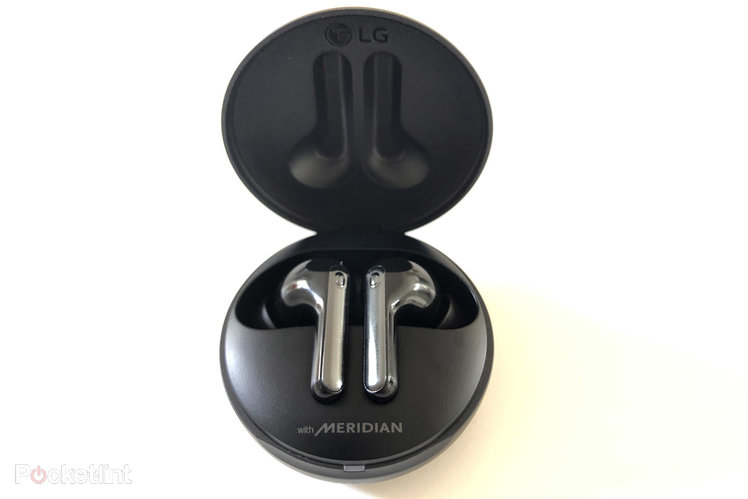 Make a list of things the world is crying out for. How far up your list does ‘another pair of true wireless in-ear headphones’ come? The answer may well be ‘not very’.

The HBS-FN7 have a feature or two that sets them apart from the majority, including ultraviolet (UV) cleaning. So while the world is all too familiar with products like this, might it find room in its heart for these LGs?

The wireless earbud arrangement pioneered by Apple, whereby a stem drops from the wearer’s ear like some hi-tec jewellery, is a bit of a ‘Marmite’ proposition, isn’t it? So whether you dig it or despise it, that’s the route LG has gone down with the HBS-FN7. The stem is pretty short here, mind you, though that’s counterbalanced (literally) by the fairly bulbous in-ear area of the FN7 design.

At less than 6g per earbud, though, the LG are undeniably easy to get comfortable and to wear – even for hours on end. They’re provided with a selection of hypoallergenic eartips, too, so even the uncommonly sized ear should have no trouble finding a decent fit. 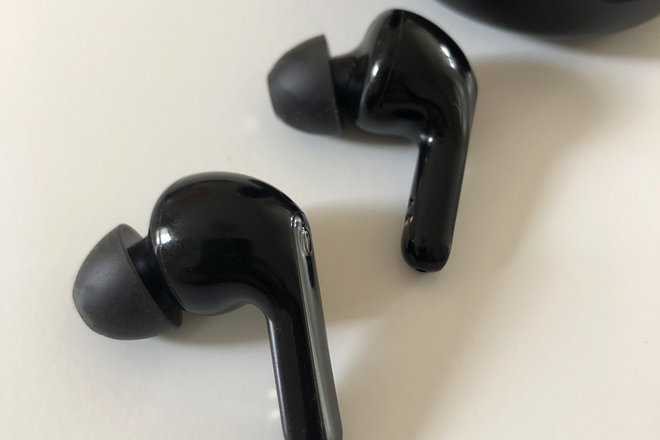 The options for earbud finish – it’s shiny white or shiny black – look good until they’re dulled by fingerprints. And that happens pretty much immediately.

The brilliantly compact charging case – which is less than 3cm deep, less than 6cm in diameter, and a mere 39g – is in a much more successful (and slightly grippy) matte finish. Fingerprints, therefore, are less of a bother here.

You won’t be staggered to learn, given that it’s LG we’re discussing here, that build quality is beyond criticism. Keep them safely in their case when you’re not using them and the HBS-FN7 will last a long time.

Having promised an unusual feature or two, that may as well be where we start – with LG’s UVnano technology. Pop the earbuds into their charging case, close the lid and wait for the little blue LED to illuminate – this indicates the case is scrubbing the earbuds free of bacteria using UV light. And in these ‘hand-sanitiser everywhere you turn’ times, that can only be a good thing, right? 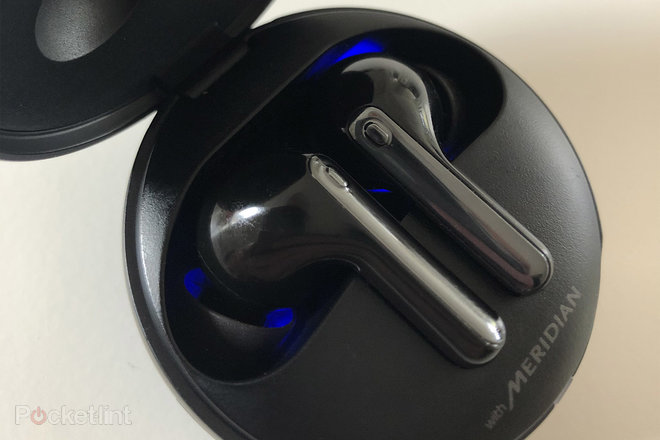 Elsewhere, it’s business slightly more as usual. The FN7 use Bluetooth 5.0 for wireless connectivity, and are compatible with SBC and AAC codecs. That’s more than good enough to access some hi-res audio from a top-tier streaming service subscription, but it would have been nice to see aptX Low Latency too – after all, we all like to consume a bit of video content on the move, don’t we?

The sound, once it’s on board, is delivered by a couple of 6mm neodymium full-range drivers. And as another differentiator, LG has opted to give the FN7 a bit of hardcore hi-fi credibility by continuing its partnership with UK specialist Meridian. So there are some Meridian-derived equalisation (EQ) settings to be investigated.

There’s active noise-cancellation (ANC) included here too, and while that’s hardly a revolutionary feature it’s not especially common down in lower price brackets. There are a couple of intensities to choose from – ‘high’ and ‘low’, naturally – as well as an ‘ambient sound’ setting that boosts external noise to keep you orientated. Noise-cancelling can be switched off, too. 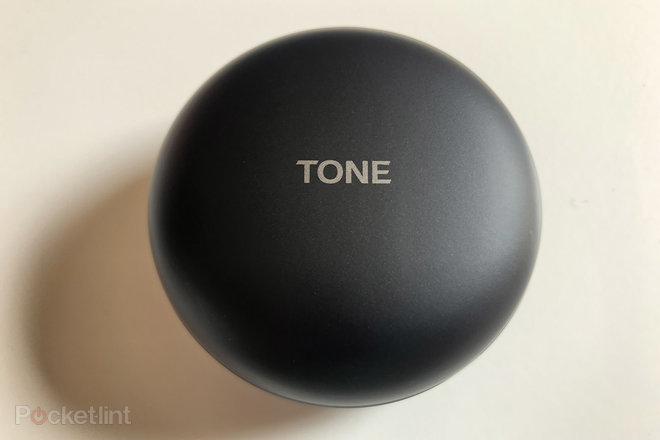 Battery life is an OK-we-suppose 5 hours from the earbuds (with noise-cancelling switched on), with another three full charges available from the charging case. So 20 hours, all in, is plenty long enough to go between charges, but there are plenty of alternative earbuds that will go for longer. For recharging there’s USB-C or wireless Qi charging is available.

There’s the tiniest little bump at the top of each FN7 stem – it’s a capacitive surface, and it proves extremely responsive. So you can instruct the earbuds to ‘play/pause’, ‘volume up/down’, ‘skip forwards/backwards’, ‘cycle through noise-cancelling options’ and ‘answer/end/reject call’ really easily and with confidence. 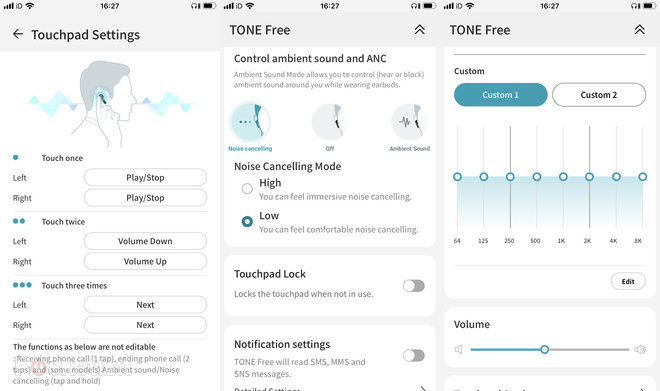 Alternatively, you can always avail yourself of LG’s impressive Tone Free control app. It’s very nicely rendered, is unswervingly stable and reliable, and has quite a breadth of functionality. Rearrange the way the touch-controls respond, explore Meridian’s EQ presets (‘natural’, ‘treble boost’, ‘bass boost’ and ‘immersive’ are pretty self-explanatory), control noise-cancelling intensity, or save a couple of EQ presets you’ve defined yourself.

It’s here where you can update software too, and where you can provoke the earbuds into emitting a piercing chirrup. ‘Find my earbuds’, that last feature is called – and they’d have to be quite a long way away for you to fail to hear them calling to you.

As far as sound quality is concerned, what the HBS-FN7 do well they do very well indeed. Where they’re found wanting, though, they fall down quite heavily. 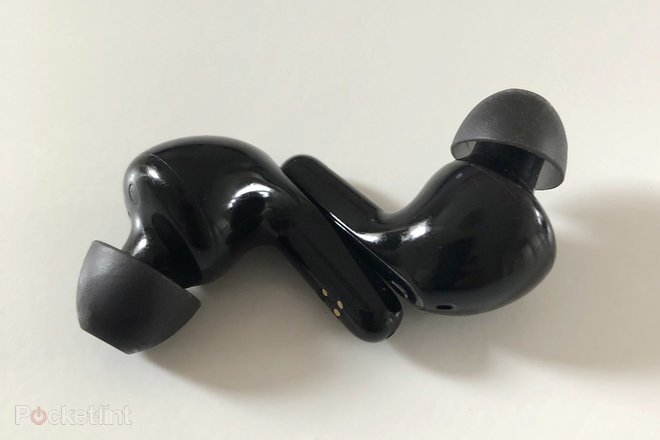 On the plus side, set the EQ to ‘natural’ and the balance of the sound is very nicely judged. The low frequencies have weight but plenty of momentum too – so a chunky tune like The Bug’s Poison Dart hits more than hard enough, but doesn’t get bogged down by its own heft.

The feverish vocal in the midrange of the same tune is detailed, packed with character and enjoys a lot of breathing space too, and as a consequence there are real powers of communication on display here.

And the top of the frequency range has ample crunch but doesn’t get particularly hard, even if you like to listen at oppressive volumes.

The integration of the whole frequency range is smoothly achieved, too, so there’s convincing unity to the sound – nothing is overstated or underplayed. (Of course, mess with the EQs and you can undermine all of this good work. The choice, as always, is yours.)

The soundstage upon which all this happens is properly laid out and coherent. There’s more than enough space available for each individual strand of the recording to be identified, but that’s not at the expense of unity or integration – there’s proper confidence to the way the FN7 stage a song. 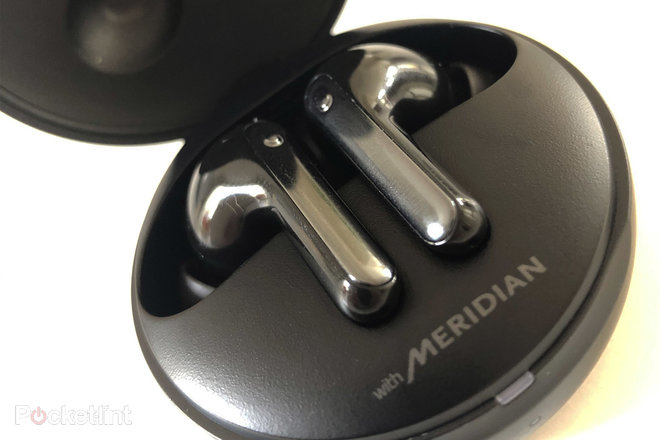 What there isn’t much of, though, is dynamism or attack. The LG just can’t summon the reserve to put much distance between the quietest and the loudest parts of a recording, and neither can these ‘buds shine much of a spotlight on the little harmonic variations that are so important to giving the listener the complete picture. Attack, of which in normal circumstances The Bug is far from short of, is of the mildest, politest type. And anyone who knows this recording knows ‘polite’ isn’t really what it’s aiming for.

The active noise-cancelling is only a qualified success, too. Set to ‘high’ it undoubtedly takes quite a lot of external noise out of the equation – but it introduces a slight-but-definite hiss at the bottom of the noise-floor as it does so. Set it to ‘low’ and it may as well be set to ‘off’.