Because projectors are so different from TVs, they’re often described using niche language like “ultra-short throw” or “long throw.” But this terminology exists for a reason. Once you understand it, you’ll have a much easier time identifying how projectors work and deciding whether a long throw, short throw, or ultra-short throw model is right for your home.

What Does “Projector Throw” Mean?

Projectors use specialized lenses to cast clean, distortion-free images on a screen. But you can’t just toss a projector in a room and expect to get a beautiful 100-inch picture. In order to get the picture size that a manufacturer promises from a projector, you need to set it at a certain distance from a screen or wall.

This ideal projection distance, usually called “throw,” depends almost entirely on a projector’s lens. One model of projector may work at six feet from a projection surface, while another needs to sit within inches of a screen to achieve the desired image size and quality.

Pulling a projector too far away from a screen will increase its image size at the expense of sharpness and brightness. But bringing the projector closer to a screen will have the opposite effect; your image will be smaller, brighter, and a bit crispier. That’s why manufacturers often list a handful of “throw ratios” for their projectors. The “throw ratio” simply describes the projection distance you need to accommodate standard screen sizes, like 80 inches, 100 inches, and 120 inches.

These measurements can be a bit intimidating to customers, and realistically speaking, the average person will only look at them when installing their projector. To make things a bit simpler, projectors are often separated into three categories—short throw, long throw, and ultra-short throw. These labels are fairly straightforward, but they can seriously impact your experience with a projector.

I have just one side-note. While most consumer-grade projectors have a fixed throw ratio, some high-end models feature a zoom lens, which lets you increase the distance between your projector and screen without sacrificing picture size or quality. Additionally, professional-grade projectors may have interchangeable lenses, though these projectors are too expensive for the average person.

Most projectors use long throw lenses, meaning that they sit pretty far away from a screen or wall. These projectors usually need at least seven or eight feet of distance to cast an 80-inch image, and of course, longer distances will accommodate larger screens.

Short throw projectors are a bit different. They have special lenses that cast larger images at shorter distances. The average short throw projector can sit just five or six feet from a screen and cast an 80-inch image, making them an ideal option for small rooms, apartments, or rear-projection setups (where the projector hides behind the screen).

Note that short throw projectors can be a bit tricky to set up, as you may need to run wiring through the center of a room. Also, short throw projectors beam images in a trapezoidal shape (to compensate for the tight projection angle), so they can produce a distorted image if you don’t install them correctly.

The benefits of each category of projector should be fairly clear. In a smaller room, a short throw projector may be your only option. An ultra-short throw projector eliminates the possibility of people walking in front of the screen (a solid choice if you have kids), and long throw projectors are great for large rooms, as you can install them near a wall to keep those cables nice and tidy.

Additionally, long throw projectors are usually the best choice for outdoor viewing, as they can sit pretty far from whatever screen you’re using. (That said, placing a short throw projector behind a rear projection screen will give you the most compact outdoor setup.)

As Always, Cost Is a Factor

In a perfect world, we could freely choose any projector we want to use in our homes. But your budget will play a big role here, because certain types of projector cost more than others.

Part of the reason why long throw projectors are so common is that they’re relatively cheap. They use fairly basic lens technology that’s inexpensive to manufacture. If you’re shopping on a tight budget, there’s a good chance that you’ll end up with a long throw projector.

Short throw models are slightly more expensive, though not to the point of ridiculousness. You can expect to pay a couple hundred dollars extra for a short throw projector. Pricing only gets crazy when you shop for ultra-short throw projectors, which start at around $2,000 but tend to include a ton of cool features, like built-in sound systems.

Bear in mind that you’ll probably buy more than just a projector. If you don’t have a flat white wall, or you buy a projector that isn’t too bright, you’ll probably want to buy a screen (that’s at least $100). If you install your projector in the ceiling, you’ll need a mount. And of course, you may find yourself buying super-long HDMI cables, cable runners, and other accessories.

Which Kind of Projector Should You Buy?

For those who have the money, short throw projectors are often worth the extra price. They save space, they reduce the chance of blinding guests or children, are they’re often the only option for small rooms or rear projection setups.

Ultra-short throw projectors are a bit niche, but they’re awesome. The installation process is simple—just plunk it down on a piece of furniture in front of your wall. And while ultra-short throw models cost thousands of dollars, they often have built-in sound systems, smart features, and other perks, which may make them a cost-effective option for people who want an extensive home theater. 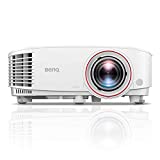