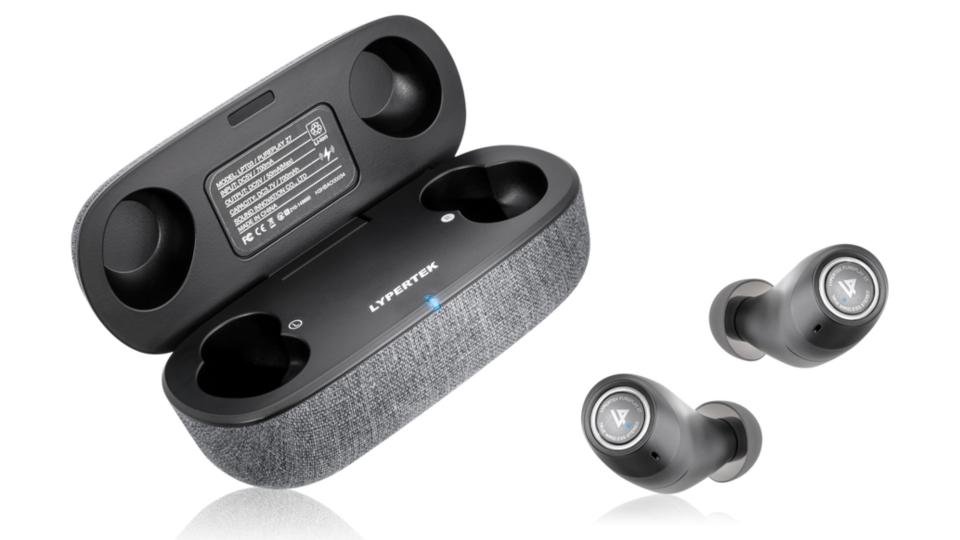 Despite strong audio and epic battery life, the Lypertek PurePlay Z7 lag behind other premium options due to a lack of advanced features

The Lypertek PurePlay Z7 sit at the top of the Chinese brand’s true wireless earbuds range and deliver sound via an advanced triple hybrid driver arrangement.

That driver technology comes at a price, however, with the Z7 costing twice as much as their PurePlay stablemates the Z3 2.0 and £70 more than the company’s most recent release the Z5, which come equipped with active noise cancellation.

The Z7 boast some of the best battery life around and their driver arrangement delivers on the audio front, but they lack some of the features you’d expect from premium earbuds. There’s no ANC or in-ear detection, and the buds themselves are a little ungainly.

Those issues make them tough to recommend in an oversaturated market dominated by industry heavyweights Apple, Sony and Bose. To put the uphill task facing the Z7 in perspective, you can currently pick up our favourite true wireless earbuds – the Sony WF-1000XM4 – for the same money, while Apple’s ubiquitous AirPods Pro cost a tenner less.

Lypertek PurePlay Z7 review: What do you get for the money?

Like the other entries in Lypertek’s PurePlay range, the Z7 operate over Bluetooth 5.2 and support the AAC and SBC codecs in addition to Qualcomm’s aptX Adaptive.

Their design is similar to the Z3 2.0 in that they’re drum-shaped and use eartips to ensure a stable fit in your ears. However, they have an inferior IPX5 rating for water resistance, meaning they can withstand splashes of water, such as rain or sweat, but can’t be submerged like the IPX7-rated Z3 2.0. They’re also chunkier than the already rather hefty Z3. It’s not a wholly unattractive design, but the way they stick out of your ears is offputting for those like me that prefer earbuds with a discreet aesthetic.

Lypertek includes a generous selection of silicone and foam eartip options, and these do a good job of securing the buds in place while providing a decent level of passive noise cancellation. The solid fit makes using the controls easy enough, with physical buttons on the outside of the drum allowing you to perform all the usual functions, including playing and pausing audio, skipping tracks and adjusting the volume.

Also included in the box are the obligatory charging case and USB-C cable. The case is covered in a luxurious fabric – this is one area in which the Z7 certainly justify their premium price tag. Both wireless and fast charging are supported, with the latter producing two hours of playback from just 15 minutes on charge. 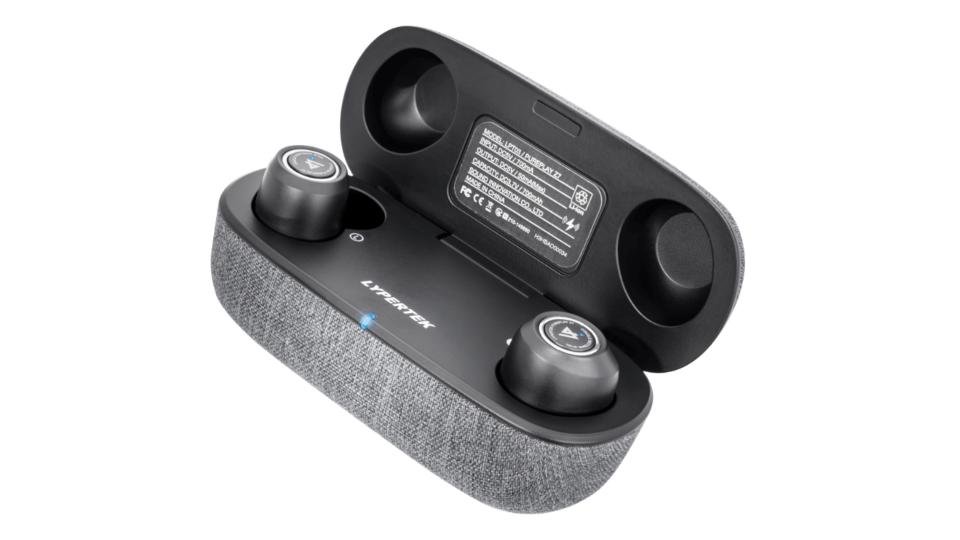 The charging case is rather large and the hinge that holds the lid open is a little flimsy, but any design flaws are easily overlooked when you take into account the 70 hours of battery life it provides. With the buds offering up to 10 hours of playback, you’re looking at up to 80 hours of use before needing to reach for a power source.

The final thing worth mentioning is PureControl, Lypertek’s companion app (not to be confused with PureControl ANC, the app designed specifically for the new PurePlay Z5). As well as a seven-band graphic equaliser, customisation options for the controls and a “find my earbuds” feature, the app allows you to turn on Lypertek’s LDX Audio mode – more on that a bit later.

Lypertek PurePlay Z7 review: What do they sound like?

That’s an impressive setup and goes some way to explaining the Z7’s premium price tag. However, the difference in audio quality between the Z7 and their cheaper stablemates isn’t as significant as you’d expect given how much more they cost.

To be clear, audio quality is really rather good. When using the standard profile, treble and vocals proved rhythmically and dynamically in step, while there was enough bass to add a solid low-end presence without ever overpowering the rest of the soundstage. The soundstage itself isn’t the most spacious, but instrument separation is effective and nothing ever sounds cluttered.

The PureControl app enables you to tweak audio to your liking and save two custom EQ profiles, while eight presets cover a range of music genres including rock, hip hop and jazz, along with options for boosting bass and decreasing treble. My playlist of power ballads greatly benefitted from the rock profile, with an extra kick in the low end and elevated upper mids for more impactful vocals. 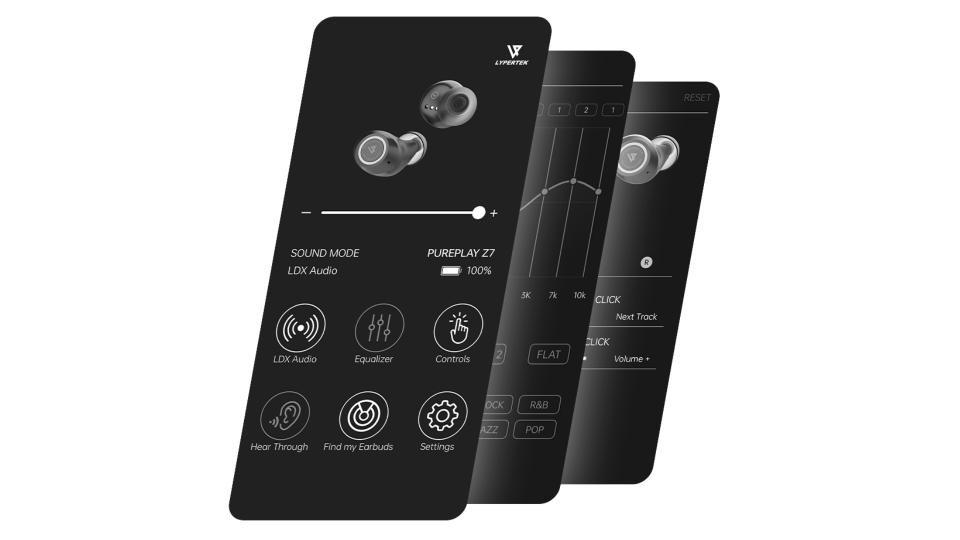 Unlike the Z3 2.0 and the Z5, both of which saw palpable improvements in quality when the LDX Audio mode was activated, the difference is much less pronounced with the Z7 due to their baseline audio quality being higher.

LDX greatly expanded the soundstage of both the Z3 2.0 and Z5, enhancing clarity and bringing audio quality close to that of the Z7. But any benefits of the LDX mode feel marginal at best when using it with the Z7. In fact, during testing, I found the best audio quality was to be had from the rock profile, not LDX.

It’s important to reiterate that sound quality is actually very good, but it feels like Lypertek has shot itself in the foot by releasing far cheaper models that aren’t too far behind in the audio department when using LDX mode. To my ears, the gulf in price simply isn’t matched by a big jump in sound quality.

Lypertek PurePlay Z7 review: What could they do better?

The frustrating thing about the PurePlay Z7 is that they don’t actually do all that much wrong. Their biggest problem is that the advantages they have over the Z3 2.0 aren’t enough to justify paying an extra £100. At this price point, it’s not unreasonable to expect features such as active noise cancellation and wear detection, but both are absent.

There is a “Hear Through” ambient mode, but unfortunately, it’s not all that impressive. With it active, you can hear higher-pitched sounds at close proximity, but anything more than a metre away from you is likely to remain unheard. 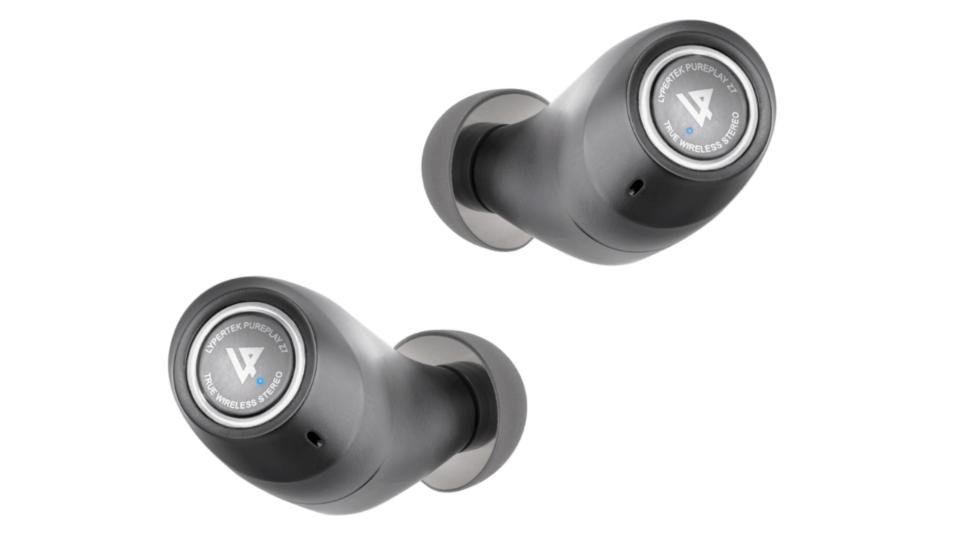 While the snug fit effectively keeps the buds in your ears, the Z7 are in desperate need of a design overhaul. Not only do they protrude further out of your ears than any other pair of earbuds I’ve tested, but the weight distribution is uneven. This forces you to push the eartips very deep into your ear canals for fear of them falling out, which results in them becoming uncomfortable during longer listening sessions.

Lypertek PurePlay Z7 review: Should you buy them?

Viewed in a vacuum, the PurePlay Z7 are an appealing prospect. They’ve got exceptional battery life and audio quality is highly commendable. But they’re short on advanced features when compared with other models available for the same kind of money, and aren’t helped by a clunky design.

If you want Lypertek earbuds, you’re far better off buying the PurePlay Z3 2.0. They cost half the price, have similarly great battery life and the sound quality isn’t far off the Z7 when you’ve got the LDX Audio mode active. Equally, for £200, earbuds such as Sony’s WF-1000XM4 and the NuraTrue offer active noise cancellation along with innovative convenience features.

Ultimately, the PurePlay Z7 are a decent pair of true wireless earbuds, but there’s far better bang for your buck out there.